END_OF_DOCUMENT_TOKEN_TO_BE_REPLACED
Last month, Digital Extremes announced that Warframe’s next major content update, Fortuna, is going to be hitting the PC version of the game sometime in November. Now we know it’s this week:

“Tenno! It’s time to rally your friends, form a squad, equip your Warframe and jump into the exotic, bustling, lore-driven Landscape of Fortuna, Digital Extremes’ next big Warframe expansion, due on PC Steam this week. Following last year’s open-world debut with Plains of Eidolon, Fortuna is a sweeping open-world landscape on the visionary terraformed planet of Venus, giving both new players and veterans a chance to quickly access entirely new gameplay content, all for free. Explore the huge new terrain on foot, hop on the radical Bondi K-Drive Hoverboard, or soar through the air via Archwing and lose yourself exploring, hunting, mining, fishing, and facing off against the nefarious Nef Anyo and the money-driven Corpus.”

Get Wicked on the K-Drive — Blast across the wide open Venusian landscape on the Bondi K-Drive. Warframe’s new means of locomotion instantly turns transportation into extreme recreation. Get in touch with the Solaris United’s youth movement — the Ventkids — to earn Standing to upgrade and customize your board to the next level (including K-Drive Mods!). Experiment with grabs, spins, rails and more. Learn how to use your board in combat: players can dismount mid-air, pull out weapons, blast Corpus thugs, and remount in air for extra points! Just like in Plains of Eidolon, players can access their Archwing to get a bird’s eye view and fly across the Orb Vallis!

The New Faction, Solaris United — The cyborg Faction Solaris United live in the Blade-Runner-esque debt-internment colony, Fortuna. Similar to the gathering bazaars of Cetus in Plains of Eidolon, Fortuna is an underground hub city that serves as a factory to clean coolant rivers and doubles as a trading hub for the region. Underneath the facade of harmony and unified labor, however, discontent runs deep. Dig into the faction’s stories, learn about the plight of The Business, Eudico, Rude Zuud, the Ventkids, and others, and help them fight their oppressors.

Fortuna and The Orb Vallis — The Fortuna expansion takes place underground and above ground, comprising the underground Colony of Fortuna and the surface landscape of The Orb Vallis. Fortuna is a hub city similar to Cetus in Plains of Eidolon, where players can socialize and pick up bounties and missions from the local Solaris denizens. The surface world of The Orb Vallis is an exotic terrain blanketed with Orokin structures, towering mushroom forests, oceanic flora, and endangered native creatures.

New Combat and Enemy Alert System — The Corpus occupiers, led by the profit-obsessed Nef Anyo, bring new technology, weapons, systems, and warriors to bear. The game’s four quadrants, bases of enemy operations, are patrolled by giant robo-spiders, while mid- and small-size robot spiders appear across the giant terrain. Players will be prompted to liberate Corpus bases for rewards and can even enter their underground bases. They’re not small! Alongside new Corpus ground troop variants and new kinds of bounties, a new Danger Rating system challenges players to escape or double down.

Animal Conservation — Strange, wonderful animals of the Vallis are going extinct due to Corpus cruelty. In between fights, take it down a notch: explore the landscape of Fortuna and use your new skills and tools to lure, track, and capture them for relocation. Hunting starts with tracking animal droppings and following footprints to the right location. Echo-lures mimic the distinct sound of each animal (each animal responds to a different lure sound) and a series of calls and responses then brings the animals into sight. Using stealth and skill to tranq and trap them will help them find a safe, happy home!

New Warframe — The bloody, powerful Garuda Warframe offers a deadly combination of health-based abilities to wreak havoc on any enemy in her path. Deployment of her skills will leave you vulnerable with low health, but greatly enhanced damage potential. Skillful Tenno will chain together tactics to keep her energy high while skewering enemies, boosting shields, and leaving a trailer of dismembered foes in her wake.

Mining, Fishing, Exploration — Resources are plentiful in the Vallis if you know how to get them. As players explore the vast new landscape in search of resources (caves, bases, and more), they’ll use new mechanics to extract a variety of different ore to upgrade their gear. Fishing makes its mighty return but with a twist. The fish in the Vallis are robotic, so you’ll need to use different spears and tips to catch them. Just don’t break them!

In the lead-up to this announcement, Warframe content creators began receiving cryptic messages over Twitter, ultimately leading them to a “secret” Discord server called Solaris United — named for the primary player-aligned faction in Fortuna — where a mysterious entity known only as The Business enlisted their assistance in recruiting members to aid Solaris United against the iron-fisted Corpus, known in Fortuna as the Taxmen.

Players quickly realized that these events were the beginning of an ARG leading up to Fortuna’s launch, and the community quickly came together, both in Discord and on Twitter via the #LiftTogether hashtag, to solve its mysteries. Since the initial Twitter messages were sent in late October, the Solaris United Discord has exploded, with more than 30,000 members online at the time of writing.

After weeks of clues, the ARG plainly neared its endgame, as The Business posted a video to YouTube imploring players to help intercept a final Corpus shipment by seeking out Warframe advertisements tagged with Corpus letters in real-world locations throughout the United States. There’s no telling how much longer the ARG will run, but if you want to get involved or just catch up on the action so far, you can check out the community contributions and get an invite to the Solaris United Discord server on the game’s official forums.

Is it just me or did they just rip off Marvel’s Galactus?

The guy in the background of the header image and video thumbnail (Nef Anyo) is looming over the landscape figuratively, not literally – he’s normal human size, but his troops control the area and it’s his plans we’ll be striving to foil.

So going over the new pet/sentinel mod sets — I think I really like them. They all have a very unique flavor and I like the new (and different) combat utility that Kubrows and Kavats will have. If anything, we might see the pendulum swinging heavily in the other direction — with buffed animals and personalized Moas on the horizon, who will take Sentinels anymore? I know I will be bringing Helios Prime to the new zones at first for scanning work, but after that? Probably kitties.

Yeah, I already use my Smeeta Kavat about two-thirds of the time, with Fetch and these new sets (and the recent changes to incubators) I’m expecting to see a lot more puppers and kitties around on missions!

I do like that these sets are only 4 mods each rather than the 6 per set we had with Eidolon. I’m also wondering how small we’ll be able to make the clip size of kitguns to take advantage of Synth Charge…

And Tactical Potato’s for good measure.

One additional thing to note is that Twitch drops this week will include Nidus and Khora as possible rewards. Definitely worth tuning into Prime Time on Thursday, since those two are considered particularly annoying to farm.

I don’t have Khora yet — maybe I should do this…

Minor correction: these Twitch drops won’t be just for Prime Time, they’ll be for all Twitch partners. The partner list is accessible from the main Warframe site.

Some of the recent Twitch drops from their official streams have been randomised (everyone watching gets 1 of 3 possible drops at random), which I hope they don’t do for these ones as it mostly seems to have been making people confused (thinking they’d get everything) and/or angry (at not getting the one they wanted).

Farming Nidus got very dull but farming Khora I didn’t mind, as I find Sanctuary Onslaught quite fun and great for farming Focus! Certainly less annoying than farming the last Harrow part from Defections ~grumble~

Can I just say that i would love the DE team to be responsible for Anarchy Online 2? Those who know both games might quickly see well this would work. 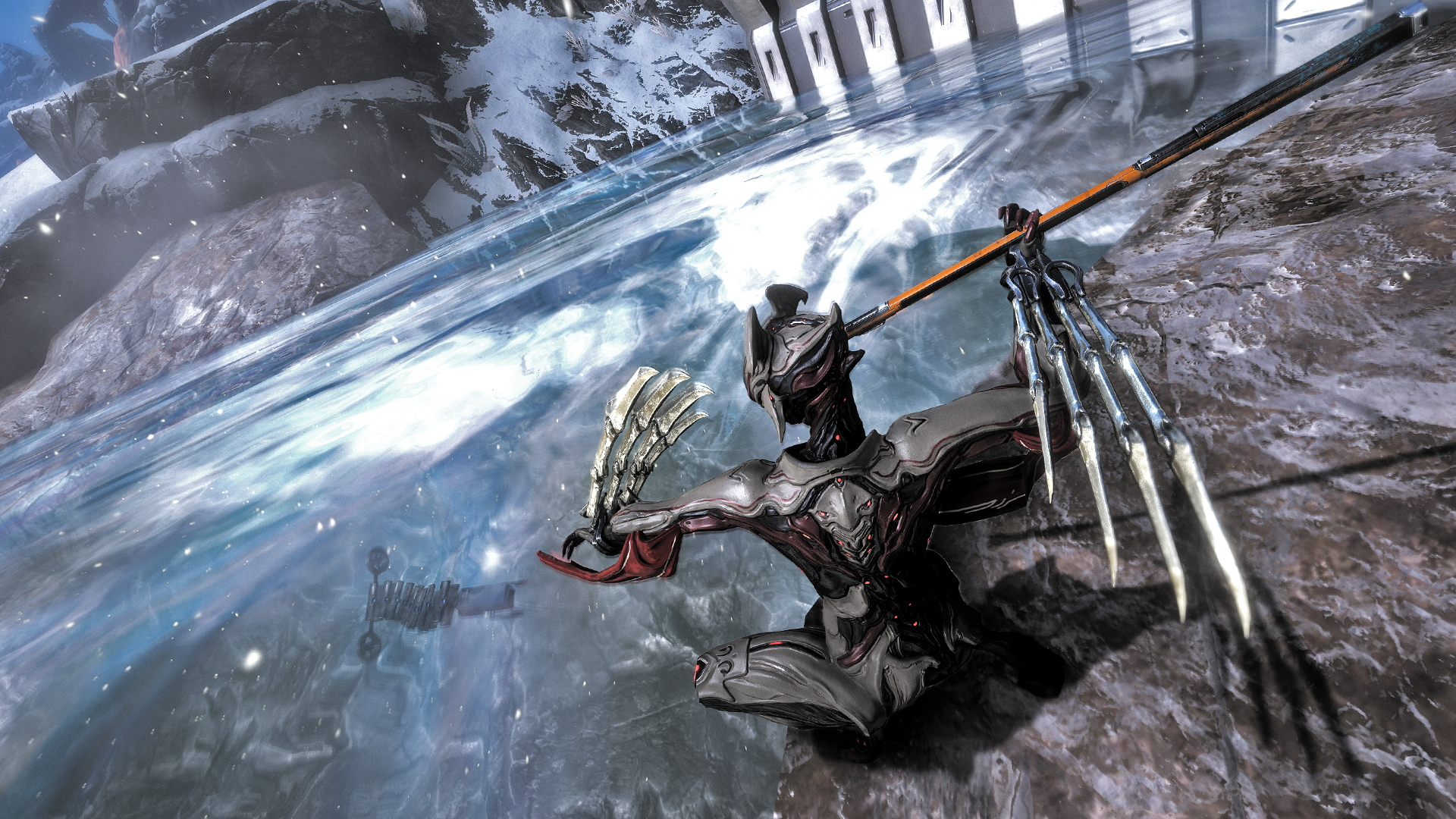 so is this like an open world MMO type thing? I think it’s time I boot this one up again.

Fortuna is open world, yes. It’s 4x larger than the open world Plains of Eidolon, as well. The game in general is not open world, but they’re moving in that direction with their new content.

There will be those who dispute Warframe’s open world credentials, because 1) it’s not persistent and 2) all instances are limited to 4 players max (or just solo), but once you’re out in that world, it’s free roam. I find it to be a perfect balance of exploration, resource-gathering (which itself comprises several entertaining minigames, all in Warframe “holy crap this is deep” fashion), questing, and combat.

Happy that Fortuna is 4x larger. I still love exploring the Plains, but one catch, once they allowed unlimited wing usage, the area shrunk in scope.

When i solo the area i’m there to explore, mine, fish, hunt so it as large an area again, and only use wings for emergency vacate vicinity moments.

Nef Anyo is way, way wussier than Galactus. Nobody will mistake the latter for the former.

This is going to be EPIC!!!