Geeks of all stripes are mourning the passing of Stan Lee today, perhaps none of them more than gamers who live and breathe superhero MMOs every day.

Over on the DC Universe Online forums, there’s been an outpouring of love for the iconic Marvel superstar. 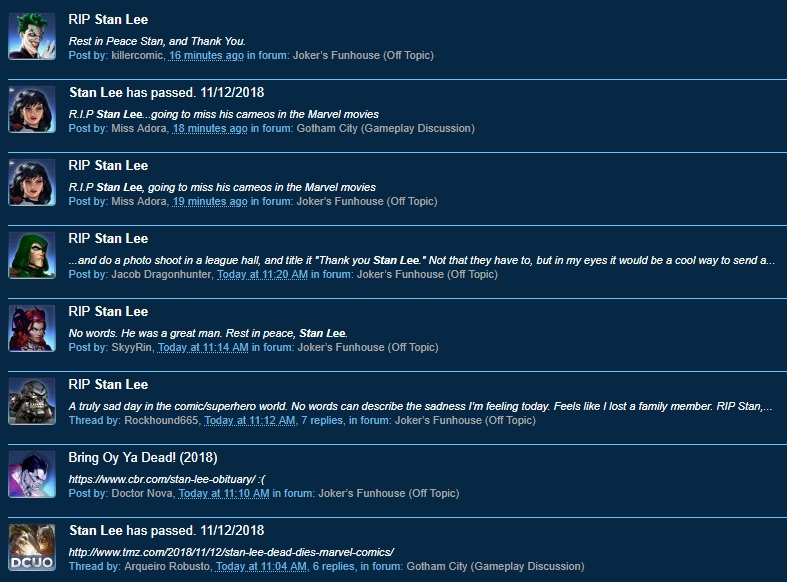 Champions Online thanked Lee for his influence, as did players on the forums:

Rest in Peace, Stan Lee. You created worlds that continue to inspire us, day after day, and the world of Champions would never be the same without your influence. Thank you for everything. pic.twitter.com/AlqQJR7kBr

The Titan Network – those are the folks who maintained City of Heroes’ community programs, run Paragon Chat, and sprouted multiple spinoffs, including City of Titans, posted a beautiful note to Twitter too:

We knew this day had to come at some point, but it doesn't make it any less sad when it happens. Our thoughts go out to his family and friends, and the millions of fans who have admired and respected his work over the decades.

We stand on the shoulders of giants.

The SEGS folks, currrently working on rebuilding City of Heroes, put up a stream:

The SEGS team sends their deepest condolences to the family and fans. He will always be “The Man” that made Superheroes and comic books what they are today, and fueled the games like #CityOfHeroes https://t.co/iSdui1FXMb

Escapism is a necessary tool to allow the brain some breathing room from ourselves. Not sure that anybody did more for the cause of escapism than Stan Lee. Legend. RIP.

I was a very avid collector of Marvel comic books in the 1970ies growing up, and to this day am still a big Fantastic Four fan.

Stan Lee shaped a lot of my imagination as a kid. 95 is a good run (and I think he would have been 96 in December); but it’s still sad when someone passes regardless of age.

Excelsior! and Make Mine Marvel!

This broke my heart tonight, haven’t felt this way about a famous person dying since David Bowie; except it’s way worse than losing Bowie.

It’s really hard to fathom how much Stan Lee has developed Marvel Lore and Cosmology; to really get the full scope there’s a series of videos on a YouTube channel called Comics Explained that’s called the History of the Marvel Universe I think and it covers everything from the formation of the multiverse to modern day . . . Well granted Stan Lee didn’t write all of that but his foundation might as well be the fucking source code so to speak or better yet what he contributed is basically the engine that an MMO runs on that later teams of writers aka developers then take it to new lengths no one thought possible before.

On a personal note when I first started to get an interest in Comics I had a remedial reading level around 11 or 12, every week I’d visit my grandfather with a stack of comic books and when he’d take a nap after chilling for a few hours I’d show off the stories by reading them to him while fumbling through them like a noob, but he had patience and put up with it and like anything after awhile I Got Gud at reading.

My husband also learned to read from the comics. In his case, it was Classics Illustrated David Copperfield that helped him overcome his learning disability.

He was a good man. That said I’m not sure I had a classic disability per say, I wasn’t dyslexic or had ADHD, my problem was suffering from hearing loss during the first 4 to 5 years of my life because of constant Ear Infections, that threw me off the path from preschool/kindergarden/part of First Grade, screwed up my social development for obvious reasons (unfortunately that stunted development there still kind of manifests it’s self in day to day conversations as I’m sure you folks may have noticed when I used to get into heated pissing matches, simply put I’m not very good at reading people and tend to either take everything literally unless i know them well enough to understand their sarcasm or I get kind of paranoid I’m missing something in a conversation and that some one’s taking advantage of me which I’m ashamed to admit happened many many times when I was a young kid, made me an extremely cynical person.

Wow I didn’t need to type all of that up to explain away a past deficiency, either way you’re right it was a disability I guess, I just get kind of self conscious about it. Detracted away from the fact that my Grandfather had patience to put up with it and help me to help my self to work through it. I had a lot of kids fuck with me because they thought I was stupid, but I didn’t really know how to out maneuver it to defend it which naturally made me appear stupid.

I’ve never really articulated this before to be honest.

No worries. Your story reminded me of my grandmother reading comics to me to help me learn when I was young. She spoiled the crap outta me every Friday night. We’d hit the 7-11 and I’d have a whole dollar — enough for four comic books. The worst thing is that even after I got better reading, I still made her read aloud certain characters and ALL of the sound effects. BAM! WHOOOSH! Man, I really miss her.

A real artist who truly changed the cultural landscape. RIP Stanley Martin Lieber your work will live on as long as we need heroes.

Marvel comics and therefore Stan Lee was a major part of my growing up. Every Saturday when I got my 50 cent allowance, I trekked up to the liquor store on the highway, which had a comic rack, and bought several Marvel comics (10 cents each), a bottle of Coke (5 cents) and a bag of potato chips (10 cents). I then spent the afternoon with my Marvel heroes going on grand adventures and fighting evil.

Thank you, Stan Lee, for many, many hours of tremendous fun.

so what? 3 comics, a bag of chips and TWO cokes? Or did you save a nickel? Did they have sales tax then?

Save the nickle. Milky Way in the middle of the week. :)

Drawing is the closest we have to visualize dreams coming to life.

Rest well, Mr. Lee. You drew a great history, and gave us the blank canvas for a prosper future.

Now i shall draw mine.

Well, I hope his likeness becomes an Easter egg in all marvel productions. I will miss his 15-20 seconds quips in each film.

Actually they pre-recorded a bunch of Lee Cameos in anticipation ..

R.I.P.
Thanks for the memories.

Sorry, I don’t have the heart to do more than copy/paste

There is little room for debate that we owe the concept of the modern superhero largely to Stan the Man.

Our heroes will continue to grow and build and inspire for decades and centuries to come. In that, he will live on forever.#Excelsior pic.twitter.com/gjgphpooqz