Since the launch of the game, guilds have been a real weakness for Star Wars: The Old Republic. For the longest time, I have felt that the developers at SWTOR didn’t know what to do with guilds, and to be fair the guild landscape has changed a lot. From the time the game was in early concept to launch, guilds were morphing from a group of friends that happened to play one game together into multi-game, multiplatform communities. Some guilds became powerful esports groups; others became a small group of people who like to do things together. I’m sure that BioWare had no idea which direction guilds were headed, so therefore it didn’t want to make the wrong move too quickly.

END_OF_DOCUMENT_TOKEN_TO_BE_REPLACED
I can’t say that it was the right decision because it made guilds a little more than just a different-colored chatroom for people to use. The developers did eventually give guilds conquests, guild strongholds, and of course, a guild flagship, but ultimately, that turned into a grindy way for big guilds to show they had a lot of people. And the rewards were mostly terrible, except for the “Conqueror of the Black Hole” title. My inner 13-year-old still finds that extremely funny.

BioWare’s Eric Musco and Charles Boyd took to Twitch on Wednesday morning to tell us their new plan for SWTOR guilds, and I’m still trying to put together if they know what guilds are for in 2018. Let’s jump into the details.

Even though the changes to conquests themselves were small, Musco wanted to make sure that they were mentioned first. I guess when you’re about to say that just about everything else that follows will revolve around conquests, then you would want to reassure everyone that conquests are going to be fun and obtainable again.

He mentioned that there would be conquest objectives added for story chapters, the Eternal Championship, Warzones, and basic kills. He also mentioned that the “defeat guards” objectives were gone because no one was doing it. OK, he actually said that a “small fraction of people” were still doing it, but that’s code for “basically no one.” The biggest change coming to conquests is a 15% commitment bonus. Because there were groups that would save up points until the very last minute to commit to a planet to ensure that they won, BioWare is giving every guild a 15% bonus to conquest XP as soon as it decides on which planet it is going to try to conquer. 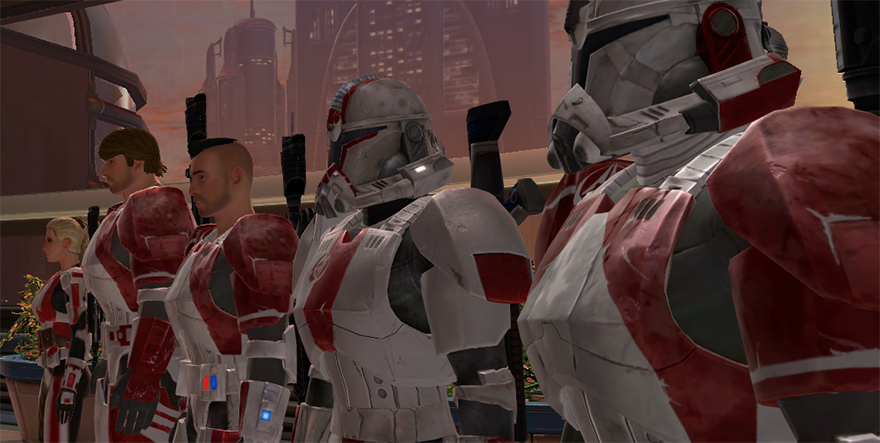 If we take what’s on the Public Test Server as what is going live, then we really see very few changes to the management. As BioWare described it during the livestream, it appeared to be a lot. There is a guild inspection, which gives other players more information about your guild when they inspect other players. There is deeper guild logging, which includes things like join and quit. (Believe it or not, that isn’t the guild log currently). We can finally send guild-wide mail, a feature that should have been in there on day one. Ban-by-legacy, which is ban-by-account, made it to 5.10. And there are 20 customizable ranks now available up from about 10. I am definitely grateful for these additions, but half of them should have been in five years ago. And the others are just flavor, not real management.

We are probably looking at the biggest change to guilds with guild leveling and perks. It’s clear that BioWare felt that this is the upgrades guilds needed the most, and the team clearly spent the most time on it. There are some really great things in here, and I understand where BioWare is coming from. But I will have to wait and see if it’s really what players want from guild progression. 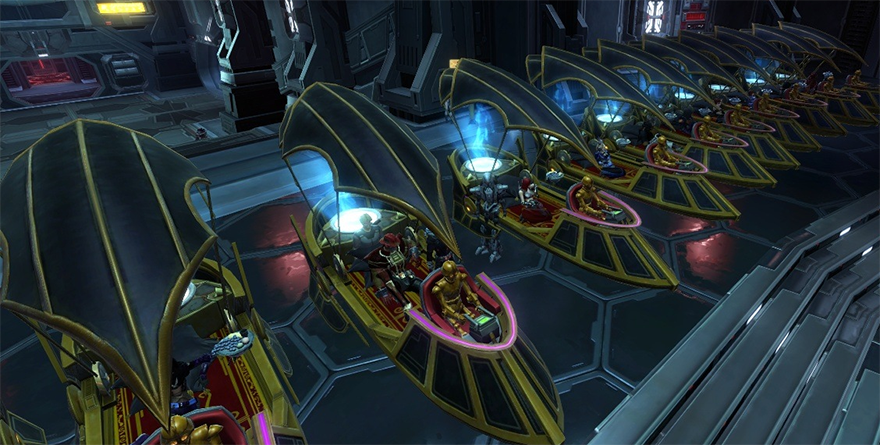 First, I should start with the great things.

The guild flagship is cheaper to open. It used to cost a guild 50 million credits to open the guild flagship. According to Musco on the livestream, it now will only cost 8 million. That feels like it cheapens the 50 million that my guild earned to open it, but for me and most of the people involved, that was years ago. I’ll forgive BioWare for fast-pathing that, especially when the difficult part wasn’t buying the first part of the ship but opening the other rooms. And as of right now, that’s not changed.

Another great thing is that the guild perks are assigned to the rooms of the ship, meaning the more rooms that you’ve unlocked the more perks you can have. And the perks themselves are not too bad. They all affect regular leveling and most PvE. Musco explained that they will not affect progression raiding or PvP. Most of the perks that are on PTS will stay, but others will be rotated out. Our friends over at Dulfy have already mapped out all the perks for us if you want to see the exhaustive list.

As you could probably guess, I am not a fan of the guild levels. There are artificial caps on the amount of XP that a guild can earn in a week, but Musco mentioned that it was so high that he didn’t expect any but the largest guilds to actually max out. It just appears to be a way to encourage players to play old content over and over again. Conceptually, I like the idea of guilds striving for perks and ship unlocks, so I think new guilds will actually have a fun time, but the guilds that have already done all the content years ago will likely burn out pretty quickly.

Overall, I do like these changes. I believe that BioWare is on the right path with them. The game earns some new points with me, but I really want to see how these play into the next expansion before I decide exactly how big of an impact they make.

Does this mean they are going to refund existing guild leaders the 42 million extra we had to spend for a Guild ship?? nope didn’t think so.

Only if they charge you real money for the privilege.

They actually mentioned if you just recently bought one you’d be welcome to contact support to get it sorted out, but there won’t be mass refunds no… would be too good to be true I suppose.

Nice for the folks who recently got one, but for those of us who have had them a while it is little consolation.

I ran a fairly small guild when I played and I bought us a guild ship myself it took me almost three years to earn fifty million credits to do that on my own.

they should refund the differenc e to all guilds that have one not just recent ones.

This came much too late. Such a pity.