Hi-Rez has never shied away from the fact that it is based on competitive games and believes esports is an integral part of the company. And over the last five years the studio has been building its esports scene by leaps and bounds, moving from that first SMITE tourney to multiple tournaments and world championships for more of its games and paying its league members a salary. (Over 10 million has been paid out to date between prizes and salaries.) This weekend’s expo at Dreamhack Atlanta crowned two new world champions (Team Envy for Paladins and Splyce for SMITE) and two world console champions (Astral Authority for SMITE and Elevate for Paladins). Even Realm Royale crowned champions Ausrhino and Kronicx in its first founders tournament.

With that background, it is makes sense that Hi-Rez would want to build out its esports program. And that’s exactly what the studio is doing in 2019 on many fronts. COO Todd Harris, also the president of Skillshot Media, shared announcements that put the studio at the forefront of building the esports community locally as well as nationally, from college varsity championships to high school leagues to research partnerships. And to cap all that off, all league matches will be done by LAN at the Skillshot studio instead of remotely. Here’s what we learned at the Expo. 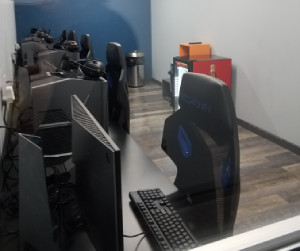 If you want to play professionally, we hope you like Atlanta. Starting the 2019 season, all teams participating in the SMITE pro league and Paladins premier league will either be traveling to Atlanta or even relocating there in order to play league games. The matches will be broadcast live in house from the Skillshot Media studio. Harris emphasized how this will allow for better programming — including more interviews, more behind-the-scenes content, and more emotional shows overall — as well as grow the local gaming community and boost the local economy. Currently, the video games industry has a $750 million annual economic impact on the state of Georgia, a number that surpasses the total sales of both the music and movie industries. And it is a growing industry (even if many gamers of other persuasions will scoff at it).

Skillshot Media, the first studio to split off from Hi-Rez into its own entity, is ready to host the leagues. Before the expo started, I toured the studio where the matches will be held and got to see the soundproof practice rooms as well as the game rooms, where teams can face and see each other across the hall through the glass but cannot hear each other. Staff remarked that trash talk gets creative when it is done silently through the large, soundproof windows that separates the two teams. The in-house production area is also ready to provide a better production experience for viewers.

Harris told me that what surprises people even more than the popularity of participating in esports is the size of audience viewing audience. Currently over 300 million people globally tune in — more than many cable networks. That makes for quite a robust fandom. So what are these fans like? What draws them in? Hi-Rez is interested in learning more about the fandom; Harris says Hi-Rez is partnering with Emery University’s marketing analytics and has launched a new research partnership devoted to the study of esports fandom. Because everything about watching esports is digital, Harris says, all the data collected offer a unique opportunity to study customer behavior and answer questions such as how watching esports contributes to playing and vice versa.

University partnerships do not end there. Hi-Rez is also working with Georgia Tech’s interactive media technologies center. By tapping into the campus’ Future of Esports class, Harris says, the company is “working together to explore the very unique human factors and interface design challenge around what we believe is the future of sports, esports.”

College, of course, isn’t just for studying esports – it’s also for playing. And that’s not just in spare time, either. Apparently, over 100 schools have now developed esports varsity teams with the help of NACE, the National Association of College Esports, which is the governing body for collegiate esports. Locally to Hi-Rez, Georgia State University leadership has been promoting esports even further; it’s one of first universities of its size to invest in esports, including participation in broadcasting, coaching, marketing, production etc.

Last weekend, NACE went one step further, holding the first two NACE National Championships right in Atlanta alongside the Hi-Rez Expo and Dreamhack Atlanta. This championship awarded a total of $100,000 in scholarships.

Pro athletes don’t often start training in college or beyond — they begin younger. Doesn’t it make sense that esports pros start training earlier, too? As Harris put it, college is too late to start! He announced that starting next year, for the first time ever high school students will have an officially sanctioned esports league. High schoolers can take their passion to play and join a school team that can compete toward state finals just like traditional sports do. Playvs and the National Federation of State High School Associations are building this league that will premier in February 2019. And Harris was pleased to announce that Georgia will be one of the first states to implement this, and SMITE itself was selected as one of the few games for the inaugural season. We’ll be hearing a lot more, “Sorry mom, I can’t study right now — the team is counting on me!”

Mixer-ing it up with rewards

The final announcements Harris shared were related to the partnership with Mixer. Hi-Rez partnered with Microsoft’s platform for livestreaming last year. For this next year, the 2019 SMITE pro league and console league games will all be exclusively shown on Mixer. Additionally, the Paladins premier league will also be exclusively shown on Mixer as well. Harris noted viewers will benefit because Microsoft has been investing much into its livestreaming, and soon exclusive Mixer rewards will be available for viewers. Who wouldn’t want to win cool loot just for watching their favorite teams compete? It’s happening next season, so look forward to getting goodies while cheering.