You’ve heard of Simon Says? At Hi-Rez Expo I played Stew Says, but in this game I try to get Stew Chisam, President of Hi-Rez Studios, to do what I say instead! In regards to answering questions, this worked like a charm. However, when it came to getting back lost games, it was much less successful. Sorry Global Agenda and Tribes: Ascend, I tried. SMITE Rivals and Bot Smashers, you stay on the shelf for now, too. Hand of the Gods, enjoy life in maintenance mode.

Games aside, there was plenty to discuss with the head of Hi-Rez. We’ve all had questions about the big studio split, and now there’s the change in expo venue to discuss. What does the future of the company and its games look like? Switch has made the cut, but can another mobile fit in? After all, Paladins Strike is doing well though and plans to release on the PC this next year. Will esports for Paladins and SMITE flourish with the big changes or dwindle? And last but not least, while I was touring the studio, we walked through the work area of “the next game.” What is it?! Sadly, the work area was carefully bereft of clues, except for one helmet and sword on a table.

Yes, there was plenty to discuss. And we’ll get to the first half of that right here.

After broaching the question of the big Hi-Rez studio spplit with Chisam, I can now say it finally makes sense. I mean, I’ve gotten the “improved identity” line before, but that really didn’t sell the split. That’s because it’s much more than the employees seeing themselves as distinct entities; it’s the players doing it as well. And with the split, it puts Hi-Rez in a position to continue to grow with new games and new companies under it, developing a variety of games. 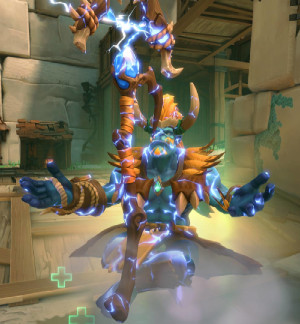 When asked what results he’s seen from spitting the companies, Chisam stated that employees have been boosted by the change. There has been no drop-off in work, and in fact, teams are looking at things in different ways which is a plus. He noted that the first split to make Skillshot Media showed that the team actually improved when they became their own identity. The teams knew what their identity was and better grasped their mission, dedicating themselves to it more. He reminded that Hi-Rez has grown from 45 to now 450 employees, and that could contribute to feeling of being just one little cog in a machine. He explained,

“When you are one out of 450 people and you’re doing one part of what the company is doing versus another, you lose a little bit of that that entrepreneurial spirit, that start-up kind of spirit you had. And we were looking for ways to bring that back, to give our people working on our different games more of a clearer sense of mission around what they are doing, what they are driving, making them think this is kind of theirs.”

Chisam also pointed out that there are many big publishers with lots of gaming studios under them and no one bats an eye. However, to have a studio of Hi-Rez’s size switch over to that, it is a quite noticeable and new feeling. “There aren’t that many multi-game companies our size in the industry,” he said.

Separate studios is also about continued growth. Chisam said it “positions Hi-Rez for continued growth. As we create new games, we can do that but in a structure that allows us to not leave the old games behind or to serve them in a lesser way. We are really excited how that allows us to scale as a company.” Hi-Rez is open to making new studios for new games, or bringing on other studios under its publishing umbrella. This also includes the possibility of opening new studios in other cities. For growth and expansion, Chisam said, “This model works a little cleaner than the model we were in previously.”

As we talked, it dawned on me: While we started talking about how employee perception changed, the split also would have a beneficial customer perception change. Specifically, with separate studios players would stop seeing any new and different projects as a threat to their pet project. When a new studio starts working on a game, perhaps like a mobile game about robots, fans won’t have heart attacks that resources and personnel are funneling to that instead, as their game’s studio will be unaffected and trucking along, business as usual.

“One of the advantages of having these separate studios both internally and externally is as an overall company is taking on additional games we still have to have a huge focus on our current games.”

Chisam said that is an intended consequence as well: “These communities want to know that you are still investing in [their games], and they tend to not care as much around the different stuff you’re doing.” Even though in the past new folks were brought on board for new projects (remember that increase to 450 employees?), players would still go up in arms crying that their games would die or suffer because of the loss of care, attention, and resources. Chisam reported that no matter how much the studio tried to communicate that Bot Smashers was a new team, the communities still had that feeling that Hi-Rez was pulling people off their games.

True, some employees choose to move over and take on new projects and responsibilities, but you won’t begrudge people bettering their careers, right? No matter how many times the studio assured players that new employees came on board for new products, players just didn’t get it. Having those clear lines of delineation helps remove confusion of who is responsible for what — on both sides of the development fence. Chisam added that as the large singular studio, it was “very easy to get distracted by the new shiny” project. Now, employees better focus on their own studio.

Any news on the new game?

Once I had that kernel of knowledge about the new game underdevelopment, I tried to learn as much as I could. The most I got out of anyone was that it was a new IP. Not wanting anyone to be in trouble for a leak, I went for more info from the top source. Chisam gave me only a couple vague tidbits. “We definitely have new stuff we are excited about. I think we’ll announce when the timing is right,” he said. Sadly, I couldn’t get anything about the flavor of the IP out of him, or confirmation about that helm and sword in the work area, but he did say, “Artistically it’s a little different for us. So, we are kind of experimenting in some different artistic directions.”

So is it a brand-new IP? “I cant say yet, but we tend to like to develop our own IP,” he noted. He then emphasized that the studio has been focused on developing in-house, as opposed to our discussion of acquiring new studios earlier. “What we’re known for and where we’ve thrived the most is on making large-scale, free-to-play, multiplayer action games that span across multiple platforms. That’s where we are trying to put most of our in-house development focus at least.” The mystery game was almost debuted right at the con, as it turns out. Chisam stated that it already demos pretty well and the team “thought about showing it here, but the timing didn’t quite line up.”

It looks like we’ll just have to wait to learn more!

Nightingale announces a delay of its early access launch to the...

Vague Patch Notes: No, Little Orbit has not solved the MMO...