Abandon hope all ye who log in here. That is how I felt at the start of EverQuest II’s Frostfell this past Tuesday. As of stream time that night, there was still no official Daybreak mention of this much-beloved holiday, let alone an announcement of its start or any new goings on. I knew it began because I followed the in-game calendar; and even if I didn’t, the appearance of decorations and the magic closet throughout Norrath heralded it once I logged in.

But the lack of exposure and apparent lack of new quests from my searching for a second year in a row bashed at my remaining EQII hopes. Last year I worried about that precedent: If Frostfell was abandoned again, if that Norrathian staple was ignored like Nights of the Dead was, what hope would we have for attention to the game going forward?

Luckily, we don’t have to consider that quite yet. The event announcement did finally appear, albeit pretty late (and with inaccuracies). And within it was that desired proclamation: new quest! Of course the new recipe books to nab for crafting holiday goodies, new items to buy from good old Gerbi Frostfoot, and new presents to collect daily from Santa Glug are also a part of the event ending Thursday, January 3rd, 2019 at 10:00 a.m. EST. And don’t forget you’ve got a Frostfell guide to help you find everything!

Nestled among that happy discovery, however, was a less bright side to the holiday. What I excitedly thought was going to be a new game event is actually just a Marketplace event.  Yes, it’s a cash shop Christmas. Welcome to the 12 days of Frostfell. 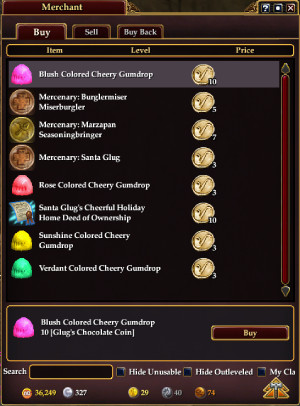 As much as I’d prefer to start with happier thoughts, the Marketplace event ends much sooner than Frostfell, so I want to make sure everyone has the chance to know about it and participate if desired. (Although, that might still be iffy unless you do it right now as the official announcement has a non-existent date down — Wednesday, December 16th, 2018 — for the end of the event. Wait, and you might miss it altogether.)

If you want in on the 12 Days, here’s how it works: Players buy special Holiday Bundles from the Marketplace and are rewarded between one and 10 Glug’s Chocolate Coins. These coins can then be turned in to Santa Glug’s Curious Clerk in either Freeport (248, -4, -34) or Qeynos (732, -21, -19). At least when you buy the bundle it tells you how many coins you get instead of some random lootbox mechanics — I think I would have blown a gasket otherwise. The exclusive items are priced from three to 10 coins, with the the house and the blush colored cherry gumdrop familiar coming in the most expensive, and the other gumdrops and one mercenary being cheapest at three.

This event may not be all that bad, and I might still have residual resentment when I thought that a cash shop Christmas event was all we were getting, but it still rubs me a wrong for a couple of reasons. One, all the best Frostfell items for the year are not accessible without buying items from the marketplace. The mercenaries, the familiars, and a new house all exclusive and all locked behind these cash shop purchases.

Second, the items you have to buy aren’t even Frostfell items! In fact, they are just an assortment of things I don’t even want, let alone want to spend chunks of money to get. I was going to be happier about the whole thing if it was about buying Frostfell items to decorate or whatnot; instead it’s huge mercenary crate packs, familiar crate packs, ascended grandmaster primer bundles, level 100 boosts, and account type potions. Honestly, I’d rather they just let me buy the items I want, not buy things I don’t. And I’d have to buy a lot of items I don’t want to get enough coins! But MJ, you say. You are getting something extra! If I don’t want it, that doesn’t help! I would be much more likely to buy items I wanted to participate than be forced into a small handful of unwanted things. It would have been much better had Daybreak made it a price limit to buy anything in the store to qualify for coins.

It irks me even more because I really would want this new house! Santa Glug’s Cheery Holiday Home is quite literally a snowglobe sitting upon a table in a decorated abode of much larger scale. This house was designed to be broken out in, meaning using teleporters to get outside the enclosed globe. You can build your little snowglobe home, then go outside and place large versions of all the other Frostfell snowglobes around it! The zone doesn’t feel too huge (other than by perspective) until you break out and try to move around. Even flying feels like you aren’t getting anywhere. 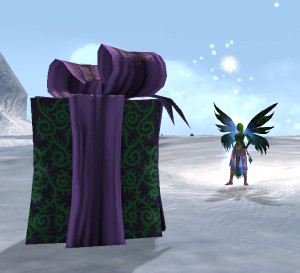 Get your Gallivanting Gifties

Let’s move on to the happier thoughts. After experiencing the lack of festival love in last year’s winter celebration then again in October’s NotD, I hoped — yet honestly doubted — that new content would appear for this year. Maybe that lack of Frostfell content in 2017 wasn’t a fluke. I am so glad to say that Daybreak pulled through on this front. As Frostfell is truly the one time of the year that traditionally has brought back many players who’ve wandered away from the game, having nothing new can be detrimental. So I was more than happy to be wrong from my first assertions of no new content in 2018. I just didn’t happen to go to the right spot.

If you just hit up the Winter Wonderland Village and the cities, you would — as I did — miss the quest. If you don’t pick up random things of interest, you’d also miss the quest. It starts in the Frostfell Workshop, that little zone found behind the magic closet in the Winter Wonderland Village. The quest is easily done by all levels, and while not involved or complicated, it’s a cute little bit that goes by super fast. If you don’t want to learn anymore, skip the next paragraph and go on to the New Holiday Items section.

To start the quest, you need to go and pick up one of those hopping presents that are gallivanting about the isle. Once you start the quest, it is pretty darn easy. You find the original gift giver (Berry Mistletoe) in the basement of the house, then collect more presents around the isle, then go find even more around three zones in Norrath. Warning: Your friends might not get the same zones, but you are pretty safe no matter where as the self-gifting presents are just hanging around the druid portals. 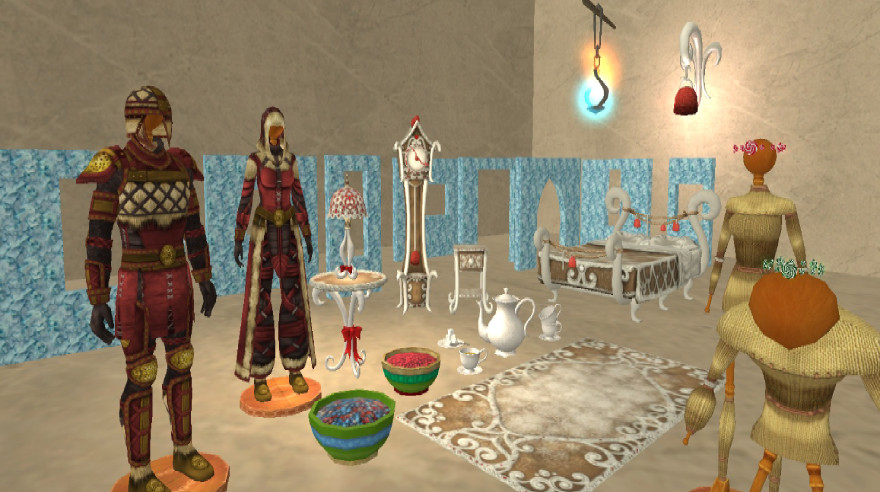 So what’s new to get? While you can see all the things you can make via the three new recipe scrolls XI in the screenshot above, you can get a good look at them all individually on EQ2 Traders. If you want to build a gingerbread house, you’ve got a number of fun decorations for it here! Gerbi Frostfoot also has a number of items available to buy with some coin or E’ci tokens. However, not that the bulk of new items are equipment for the highest levels. There are 42 new items available for players level 100+ and 26 new items available for players level 90+. There are only five things players of all levels can purchase: a frozen mount, an icy basilisk housepet, a white reindeer pet, a snow wisp plushie, and a snowpile that makes players shiver when standing on it.

Santa Glug’s daily gifts, which he will hand out every 18 hours to each and every alt, include seven returning items and eight new ones. They are:

There is plenty of time to get a wide assortment of these gifts, especially if you have many alts! Remember, you can get a new gift every 18 hours (not 24) and the event goes until January 3rd, 2019. You might want to consider more bag space now.

And on a final note, the progression server Fallen Gate (remember Stormhold is no more) does get to celebrate the bulk of the Frostfell holiday, including the Winter Wonderland Village and many of the quests. What is not available, however, is the newest quest Gallivanting Gifties as well as Deepice Dreams and Little Lost Goblin. Those have zone requirements that aren’t in the server yet.