There’s a common criticism of Final Fantasy XIV that I frequently see and agree with. The argument goes that basically, five years out from the relaunch, FFXIV is predictable. Every patch will contain a set number of dungeons, each of which features three boss fights. Each patch features either a new 8-person raid or a new 24-person raid. There’s going to be another chapter of the ongoing story and you can even guess about the upcoming beast tribes and crafting updates. They are reliable.

I agree with this criticism… up until the point that the individual in question labels this as a problem.

END_OF_DOCUMENT_TOKEN_TO_BE_REPLACED
Some of this, I think, is just a matter of perspective. A lot of the time, this comes from people who are playing FFXIV and nothing else and don’t realize that five years of content on a clockwork schedule is actually really spectacular. But some of it also comes from expectation mismatches and years of exposure to a lot of titles reinventing themselves completely to varied degrees every couple of years. So let’s actually talk about this a little bit. 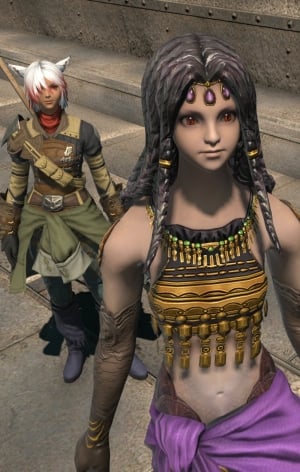 My suspicion is that there are two real “sources” for this particular criticism. The first source is people who are only passingly familiar with the game but more familiar with, well, the larger context of MMOs, wherein major rewrites are pretty much expected. If you watch the cycle of updates following expansions for basically any other MMO you care to name, you’ll see lots of huge changes of systems, update cadence, and general game mechanics. None of those things have happened, so FFXIV must be kind of stagnant, right?

The other side of things comes from players who want some upheaval because that consistency does mean that you can have been running the same general sort of endgame for the past two and a half years. But that raises a question of how much of that is a result of stagnancy in the game and how much is, well, stagnancy of individual play.

To use that same stretch of time, since then we’ve had the Deep Dungeon, Eureka, the revamped Diadem, Alliance Roulettes, Normal Raid Roulettes, and new PvP modes and structured rolled out. And I am only counting stuff that can actually reward either tomestones (or tomestone-equivalent gear); we’ve had other additions, but these are the ones that actually impact endgame the most.

What is that endgame that we’ve had for the past two and a half years, then? It’s pretty simple. You can earn 450 of the most recent tomestone per week; you can earn one weapon token from the last fight of the most recent normal raid per week. Get seven tokens and pay some tomestones to get a weapon, pay variable amounts of tomestones for every other piece of gear. Rinse and repeat, you can most definitely mark when you’ll get your gear on a calendar if you’re so inclined.

The thing is… you’ll note that there are a lot of ways to get tomestones. Lots of different ways. This means that your individual rotation for getting those 450 tomestones every week can be very different from everyone else’s. You can do Expert Roulette for five days and cap out that way. You could also do Expert, Alliance, and Main Scenario for two days, then do one more Expert to cap out. Or you could do Expert, Alliance, Main Scenario, and Level 70 for two days and probably cap right there. You could fit in Trials or Normal Raid or Leveling in there, too. The point is that there are a ton of options, and most of them are at least somewhat inclusive of elements that have been in the game for a long time.

All of this is disregarding the piles of stuff you can do that isn’t related to kitting out your main job, as well. Even if you never want to bother gearing or leveling more than one job, there are still side stories, beast tribe quests, and assorted extra challenges. Add in crafting and gathering and you usually have custom deliveries to make, new crafts to take part in, and new items to scrounge up. And then there are challenges like the upper floors of Heaven-on-High, or progression content…

The overall development ethos of FFXIV has long been that if it’s not broke, don’t fix it. Players are even getting a new form of open-world content added in 4.5 with the inclusion of Blue Mage. There’s always new stuff being tried; it’s just that the core gameplay loop has remained pretty consistent. And that is, in fact, a good thing.

It isn’t a failing or a lack of understanding. The portion of players who really gets into high-end progression content is tiny, but the team still finds new ways to offer them different content, including the Ultimate trials this time around. You might not have enjoyed Eureka (and a lot of people didn’t), but it was a genuine attempt to do something different with the game and offer a different gameplay style. You might not like PvP, but even that gets regular update, and a lot of people seem only peripherally aware it even exists.

That’s not to say you can’t ever get bored with it. Lord knows I do. There are a lot of times when I make a point of capping out for the week and that’s about all I do (as mentioned, that isn’t exactly a challenge to accomplish). But that’s not a failing of the game, that’s just human nature.

Imagine, for a moment, that you have a lifetime subscription to your favorite restaurant so long as you always order the same dish. In fact, let’s assume it works like Five Guys, in that there are lots of variants on it, but it’s still the same basic meal every time. If you like that hamburger, you can cycle through lots of variants each subsequent night, and it’ll keep you fed each time, but eventually you’ll start to get tired of the hamburger.

It’s not that the hamburger got worse, it’s that you’ve been having it every night for a long while, and eventually having something really good presented on a regular basis makes you analyze the small failings all that more closely. You start to feel like it must the the restaurant’s fault instead of thinking that maybe you need to just take a little break, go have some salad or some tacos or whatever, and come back to your favorite burger place after you have some space.

So yes, I agree, FFXIV is really straightforward and consistent and reliable with its updates. But that’s not a bad thing; it’s a sign that the game’s developers know what works and how to continue delivering consistently. When your criticism of a game is that it’s too consistent, that might actually be the best problem to have.

Feedback, as always, is welcome in the comments down below or via mail to eliot@massivelyop.com. Next week, let’s talk about the live letter we know is happening on Friday. Sure, we’ve already got a lot of details from the fan festival, but I’m sure there will be new things to talk abut.