One amazing trailer and a day of hype later, Guild Wars 2’s All or Nothing will be live this afternoon for us to play. The episode makes for the fifth installment this season, and I can confirm that it is off to a strong, impactful start! As usual, I had the opportunity to get my hands on the episode a little before its launch to see what it might have in store for us, and I did a little running around of my own thereafter too. What an amazing start to 2019 this content drop plans to be!

END_OF_DOCUMENT_TOKEN_TO_BE_REPLACED
In this edition of Flameseeker Chronicles, I’ll dive right in with some early impressions for an All or Nothing preview. The dev playthrough focused on the first chapter of the newest episode and ended on some map exploration related to chapter two. While I do try to keep previews relatively light, expect mild spoilers throughout the preview. 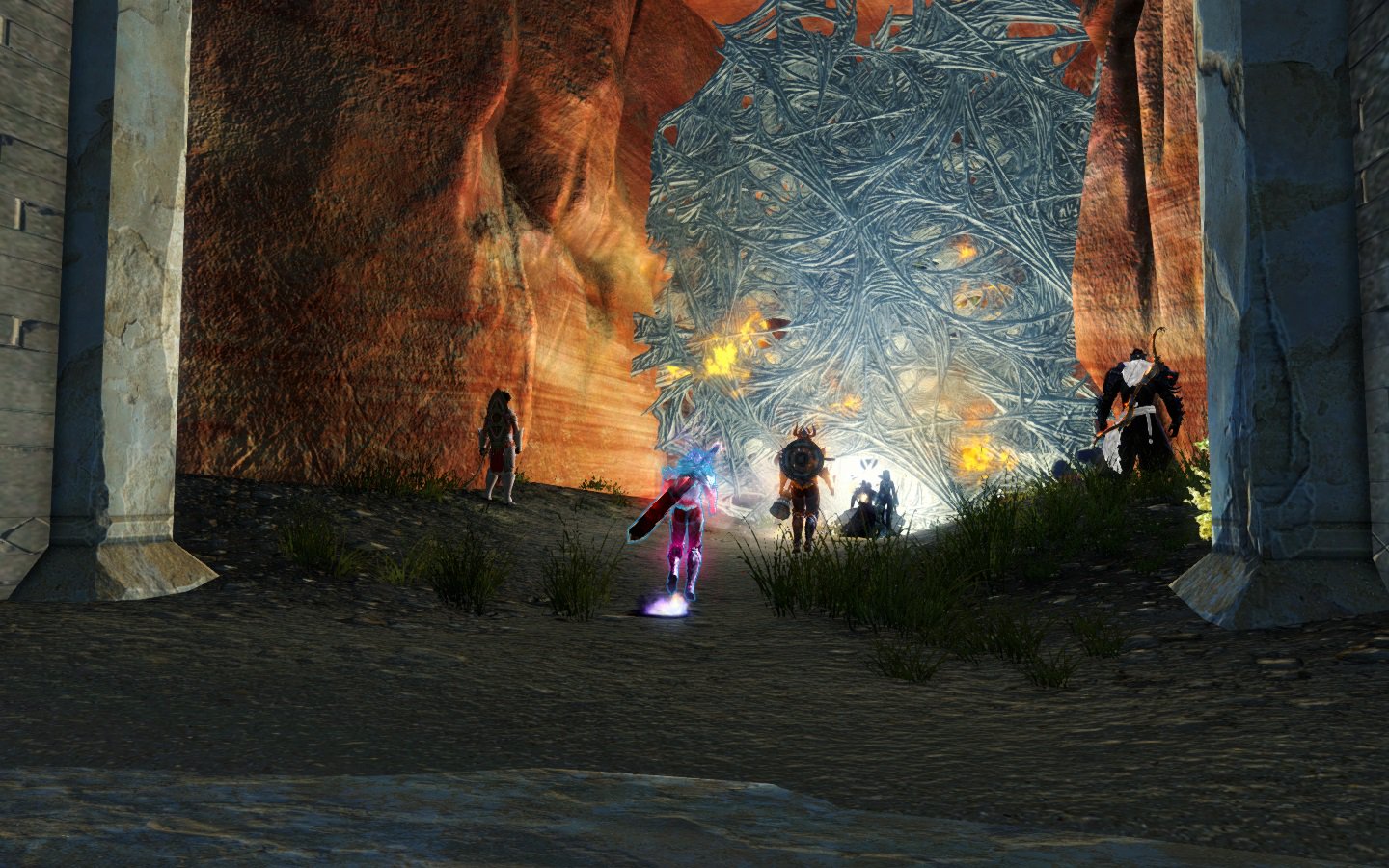 I’ll quickly take you back to the events of A Star to Guide Us so you have your bearings before we jump into the preview. An exhausted Aurene gate-crashes a tense summit of the Elonian factions and, eventually, all hell breaks loose: Archon Iberu is slain by Koss just before Utumishi mounts an attack on the summit. Aurene ploughs through a tear to the Mists after the death-branded shatterer and we need to find her, and Taimi reads anomalies all over Jahai that must be investigated.

It emerges that the Branding can only go so far underground, so the commander works with the guild and Koss to make a safe haven out of an old Sunspear sanctuary, which we name Sun’s Refuge. Before it can be fortified, Taimi leads a frail Aurene in and the Branded amass an attack. It emerges through observation and research that Kralkatorrik is intent on Aurene and will attack wherever she is and that the elder dragon is growing stronger with every passing moment he spends in the Mists, so Aurene must face him now if she is to save Tyria and the commander must aid her. Aurene has a sequence of visions that all show her failing and flees the heated debates surrounding what she should do next, causing panic in the Refuge.

Blish calms the storm and formulates a plan to track Kralkatorrik through the Mists with a fitted device but he needs a powerful magical lure to attract him. Cue a hunt for Balthazar’s sword led by the commander! At the Skygardens, researchers point us back to the Jahai Bluffs to trace the sword in what is a herculean sword trajectory. We must approach Deadeye, a sniper who has claimed the sword from the researchers who found it, which is easier said than done when Deadeye is a very talented priestess named Zafirah who wants to finish Balthazar’s work. The commander eventually speaks sense to her after a long battle and she agrees to help and relinquishes the sword.

Next on the list is charging the blade: Rytlock uses his sword to bring Balthazar’s sword back to power, and the focus turns back to placing a tracker on Kralkatorrik. Braham apologises and makes amends with the commander before the gang enters the Mists through one of the Branded portals. Blish accompanies the commander, leaving Gorrik behind in safety. The Mists is chaos: Glint has sent her army to distract the Branded therein, but the lure of the sword’s magic is too much and the Branded swarm to try and seize it. Once the ambush is clear, the lure is set, and Glint confirms Kralkatorrik is coming for it.

Cue the saddest tale ever: The tracker is damaged by the sword as it reacts to Kralkatorrik’s approach, and Blish decides to sacrifice himself since his golem body can power the tracker in place of the broken power core. The commander must flee and Glint aids by opening a rift just in time, but Blish is lost. Add to that the gut punch of the century as Taimi reveals that her condition is not in remission and her health is deteriorating in a life-limiting way. She resolves to keep her priorities focused on saving Tyria, and Caithe pops up from the shadows to help us find Aurene again.

Now that we’re all on the same page, I must give a solid nod to the trailer for this episode. Frontloading the presence of Ogden Stonehealer in this story arc is positive, and the aim of the game is clearly spelt out for those who haven’t been keeping up with story drops. Do or die is at the heart of the trailer and it definitely leaves you feeling the correct mix of hopefulness and fear. I like the balance achieved here: It’s spoiler-free and protects the content without leaving things too dry. 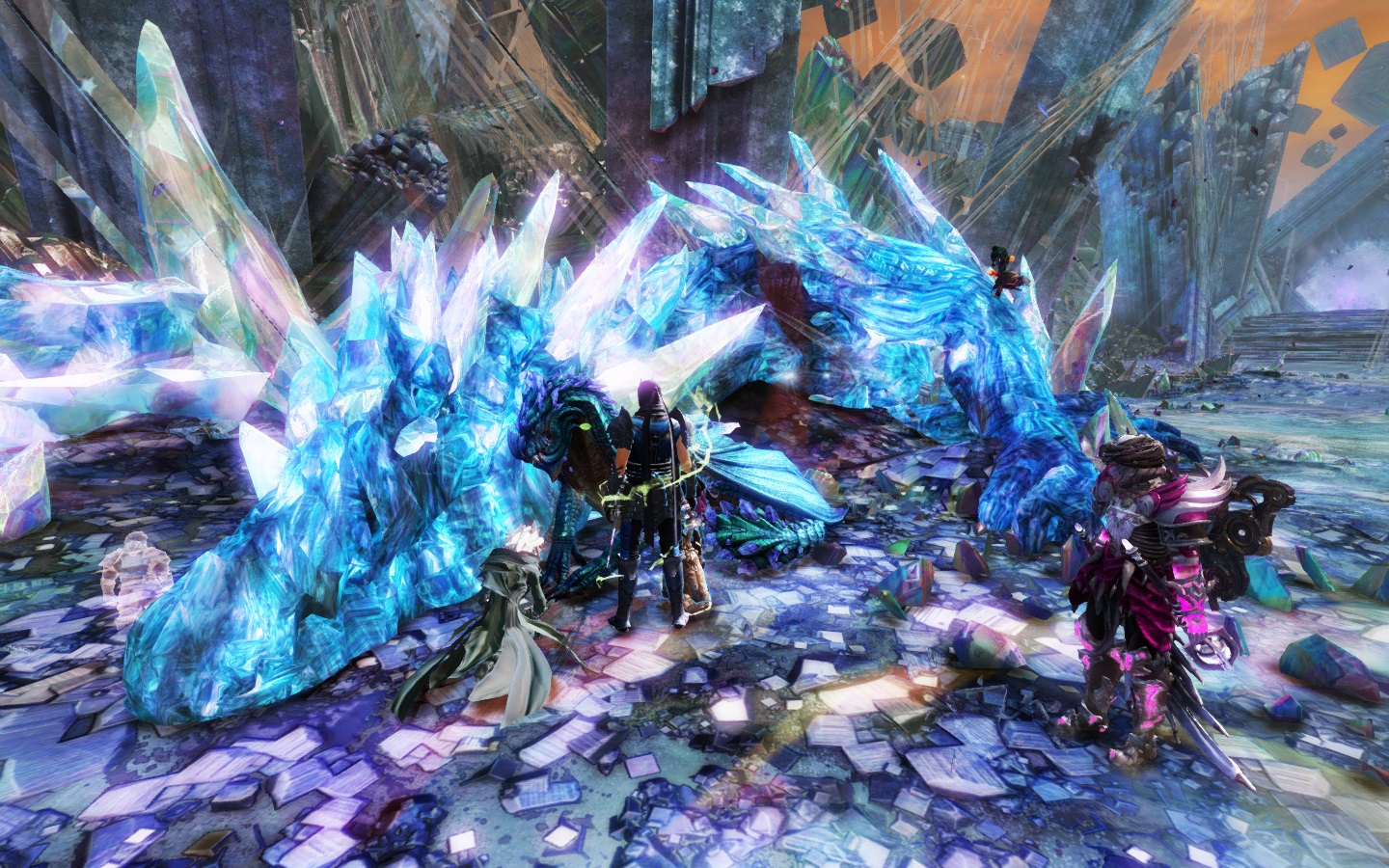 Our playthrough commenced with chapter one, and we had to join Caithe in the Priory to get her access to much-needed information from Ogden Stonehealer. She has spent her time away from us researching Glint’s legacy and brings potential leads back to the commander, realising that both their fates are tied to Aurene and that legacy. With her colourful past, Caithe would struggle to get in on her own, so we’re there to smooth her path. Ogden points us to Thunderhead Keep: He plans on helping us forge a new dragonsblood spear to kill Kralkatorrik with.

Beforehand, however, he says that the scion and champion must prove their mettle in an extension of Glint’s lair within the Mists that is both a refuge for the scion and the access point to the final trials. Aurene is already within the refuge, so the commander and Caithe head on to meet her. The poor youngster is curled up to her mother’s crystallised body in such a sad little scene that definitely tugs on the old heartstrings. The duo reassures the young dragon and the commander and Aurene head on to face the trials ahead while Caithe hangs back.

Glint leads us through several trials: I don’t want to overexplain here to allow you to experience these trials for yourself, but suffice to say the trials are in a similar format as those that came before, though some neat new mechanics with Aurene come into play. By the end of the trials, the commander and Aurene successfully craft a new spear and combat some of Aurene’s fears through their collaborative training. Glint finally grants a gift of understanding to the scion and champion in turn: The commander learns how the journey began (again, I’ll leave this for your own playthrough) and is told that the hope and belief in Aurene’s success and the future it would create is the champion’s burden to bear.

Caithe tells the commander that the pair has been gone for two days, much to their surprise. You’ll notice a new model for Aurene with some new effects and larger, more luminescent crystals on her, which is very cool. Upon heading to the keep, Taimi lets us know that everyone is gathering for the battle. Ogden explains that the dwarves built the place, but the dragonsblood forge itself is partly powered and cared for by the Zephyrites and Exalted. The Zephyrite choir for the forge is truly beautiful and hanging out here to listen to the gorgeous singing is highly recommended.

To prevent the forged weaponry from cracking, they need quenching in a special oil that the Dredged extract. Chapter two commences with a quest to go and retrieve this oil, which sets us out into the Thunderhead Peaks. The common themes found in other episodes – struggling people needing help in the face of massive disaster and large-scale warfare – persist here, so the commander gets roped into breaking Brand crystals and generally cleaning up. Equally, Gorrik is left in charge of a barracks, which is not his forte, so the commander also must weigh in here too. Logan, Canach, and Rytlock train troops within the keep, though generally keeping morale up never ends for the commander. 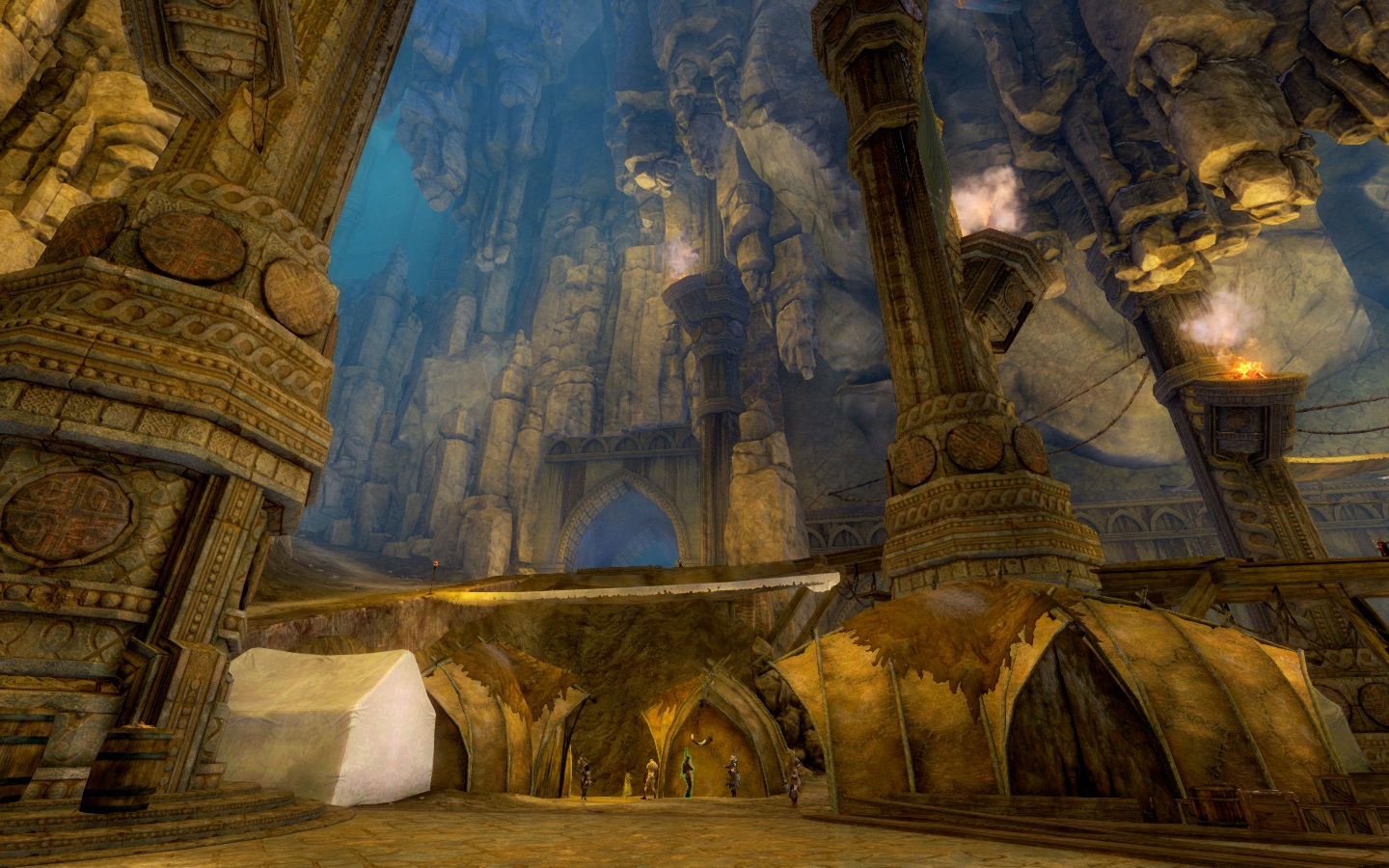 Thunderhead Peaks is one of the paciest, most action-packed maps we’ve seen of late: Hearts are well-supported with events surrounding them, there is plenty to do off the beaten path, and there’s enough verticality to make things feel impressive in scale without going back to Heart of Thorns madness. It’s clear that the map was made to make the new mastery Bond of Faith feel amazing, which is no bad thing. The map has two meta chains to follow that revolve around key characters too, which keeps things interesting and makes the busy work relevant to the overarching story. Skritt, Dredge, Zephyrites… this map has it all if you spend time here.

In terms of general navigation, the clue is right there in the name. Expect to make excellent use of your mounts to traverse canyons and leap to the uppermost ledges of the steep peaks. Things that seem out of reach now aren’t, since Bond of Faith adds that extra pop to dismounting. The dev team joked that they dubbed this mastery ‘the Yoshi jump’ internally, which gives you a good idea of how it might work if you’re not actively playing.

I’ll leave you with a gorgeous gallery that tracks the playthrough locations, but expect to see more imagery as the story progresses and I get to my deep-dive because I’ll bet the action moves quite quickly from here on out.

Let me know how you’re enjoying this episode as the day progresses. I’m looking forward to seeing what comes later on in the story chain: Although I had access, I avoided anything past chapter two because of some spoiler warnings we were given during the playthrough about later content, and I also didn’t have access to the end chapter of the episode even if I had reached that point. I can’t wait to spend the day playing to see how the action pans out. I’m sure there’s more heartache in store before this episode is over and I’m not sure I’m ready!