Sitting back and loosely following the development of an early access game, then hopping in here and there to check out a score of updates in person, definitely seems to be the way to go. It is certainly a winning combination for Outpost Zero! With last month’s big engine upgrade to UE4.19 and a few months of updates and bug fixes, I felt it was time to pop back in to take a peek after my hiatus. And am I glad I did! I was very pleasantly surprised by how much better changes have made the game. In fact, I might have gotten a little addicted to playing from that single session; I don’t want to stop! (I might even be logged in right now…)

What’s going on on this hostile alien planet — I have no idea what it is called, so let’s name it Bob — now? Well, fun is! Oh, you want details. How about better building, more exciting exploration, faster robot assembly, and more.

It surely comes as no surprise that better building was an easy way to rope me into the game deeper. And building is definitely better! When I first started poking into Outpost Zero, players had to harvest and mine quite a bit in order to get the quantities needed for construction. Each node had only a few resources before it was depleted and then you had to run to another. If you found a collection fairly close (harder to do with anything but flora), you could make a little circuit so that the first replenished by the time you returned. I actually like harvesting, so that wasn’t terrible; however, the small amount I gleaned and having to search far and wide meant I couldn’t build much at all. And that makes me sad since building is one of the biggest reasons for me to be in the game.

Harvest quantities were only part of it, though. When survival depends on having a structure, you really need to be able to make the structure. And spending a day trying to get enough (and likely dying a few times and respawning all over the map) is not fun. You can’t respawn at your structure until you create your command center and claim the land, and you can’t do that until you have enough resources. 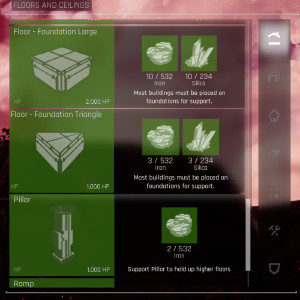 Fast forward to now. Now, the nodes are bursting with resources. Some are still smaller, but the first iron I found gave me enough to build almost three stories of my first base. Three stories! I was able to get established with the equipment I needed in fairly short order, which made me just want to stay in and expand more. And expand more. And more. I swear I could leave when I wanted to.

Building itself is also improved, with a directional arrow ensuring you can tell exactly which way your item will face, a larger variety of pieces and decorations (triangles! couches! large pieces!) and the ability to rotate better. There are pipelines to carry resources over distances and structures like Auto-welder, Repair-o-tron, and Base Shield to keep your base up and running smoothly.

Building is only one of my two favorite gaming endeavors. The other is exploration. And wouldn’t you know it, Outpost Zero has improved exploration and made it more interesting too. One, there are vehicles! Just because you are a robot doesn’t mean you should have to walk everywhere. Jet-bike and Hover-Sled Vehicles will now carry you farther, faster. That can also help you get to a power node faster before you die! Not dying is good in a survival game.

Even on PvE servers, there is more to keep things risky than just the weather. Pirates will now also ambush you while you are out and about exploring. You can even run across pirate-occupied bases and relieve those pirates of their ill-gotten loot. Don’t tell me that doesn’t add excitement when you are suddenly swarmed by those thieving low-life bandits. Well, at least if you win.

One of the big hooks of Outpost Zero is that you are building up a giant robot army to help you develop this colony, so actually building robots is a big deal. Back when I was first playing, getting what I needed to produce robots was not super successful. I managed in the end to create one extra bot. Now I have four! Granted, I looted one from some other dead robot, but hey, I don’t want it to just lie there lonely. I even have specific “birdy” combat drones to patrol and protect my growing empire. If I could find some uranium, I’d have an army amassed in no time. And let me tell you, I am aiming for that.

UI improvements make it easier to command your bots, and there are large minion AI improvements to enable sustained automation. Drones can not only harvest but take fuel to your power sources and empty your harvesters and deposit the materials in your base. How cool is that?! I want a full colony of bots and am willing to play until I can make this happen.

Although not game making-or-breaking by any means, there are other fun perks that have made the Outpost Zero experience better in its current test phase. One, you can see a number for each server on the list, so it is easier to meet with friends on the same one. Or you can use the newer join-a-friend feature. Additionally, while I haven’t tried this yet myself, you can host matches locally with your friends. So yes, you can definitely enjoy the game with friends more easily, and that is a huge plus for me. Now, to get more friends in the game!

On top of those additions, there is a daily drop that you get providing you with some free something-or-other. I haven’t gotten anything super cool, but free resources are free resources. And speaking of drops, I have no idea how long loot drops last, but it seems like they might be until someone picks them up. I will readily admit that one thing that made it really fun was stumbling across the dropped items of some other dead robot. I hit the jackpot! In it were armor pieces, weapons, and upgraded harvesting tools. Until that point I hadn’t even realized that the armor and harvesting tools were in the game at all.

Other improvements over the last few months include customizable game settings, a new XP progression system for unlocking perks and structure blueprints, and a major rebalance to weapons, combat, and loot. The game is definitely moving along and improving.

Even though the fun factor rose exponentially for me, that doesn’t mean there aren’t still things the game needs to work on. If not, it wouldn’t be early access anymore, right? The top problem for me is the volume of those stupid charging stations! They hurt my ears something fierce! And they should not be autocharging me whenever I am in range — and that range is huge — unless I want to. So I hear those things constantly, and that makes me want to log out. I’d like to silence them and be able to turn off autocharging on myself. Unfortunately, if I just turn the whole station off, my drones don’t get charged. Then again, they also aren’t getting charged one square away from the charging station, claiming they can’t find it. Definitely need that fixed: Power-drained drones don’t protect or harvest! I also can’t stand the mile-long visual tether you get to the charging station. Let’s please ditch those, OK?

Another point I’d like to see changed is removing the harvestable resource icons from showing on screen as green diamonds all over. These make the view of the planet you are exploring ugly, especially near some of the pretty plants when your UI gets super cluttered. I’d much rather these indicators appear only when you’ve turned on your harvesting radar (pressing N).

As you’d expect, yes there are also bugs. I died twice to a crab that would not register taking any damage no matter which weapon I hit it with, a sword or the handy tool. It also butchered two of my robots. Sigh. Obviously, that wasn’t fun. Also, having the announcement of weather events in a particular zone always also happen in your zone (and I assume all over the map) is tiring at times. I’m sure the farther I get, the more things I will run into. But in all, I have been having a blast playing. Kudos to the devs for all the improvements thus far, and keep it up! Oh, and if you are looking to join a robot bent on alien world domination, come join me on official server #33. See you there!

In the survival genre, there are at least 1001 ways to die, and MJ Guthrie is bound to experience them all — in the interests of sharing them with you! The Survivalist chronicles life and death struggles against all forms of apocalypse, outbreak, mutation, weather, and prehistoric wildlife. And let’s not forget the two-legged enemies! Tune in here and on OPTV to see who feeds better: MJ or the Death Counter.
newest oldest most liked

I’ve had serious FPS issues since the latest patch… still trying to nail down the cause. My first landing after the wipe was a clusterf**k. It landed my right on a volcanic eruption which proceeded to kill me instantly. lol.

Calling a planet Bob is sure funny :p

…and then MJ’s robot army took over Planet Bob.

What the… Someone else named their planet BOB?!?! AAARGGGGG

Perhaps you should have chosen Bill? Planet Bill?

And here I thought you were intentionally making the reference to Titan AE.