One of the dungeons launching in next month’s Elder Scrolls Online Wrathstone DLC is Depths of Malatar, a four-man romp featured in ZeniMax’s latest dev blog. If you’re a fan of Ayleid lore and architecture in Tamriel, you’re gonna like this one, as it’s based on a notorious dungeon in TESIV: Oblivion.

END_OF_DOCUMENT_TOKEN_TO_BE_REPLACED
“Centuries ago, an Imperial expedition uncovered the lost Ayleid city of Garlas Malatar and built Fort Mistwatch within the ruin’s entrance,” the studio explains. “While the fort was intended to protect the Imperials as they looted the city below, a sinister power was uncovered by the expedition, resulting in the loss of the entire cohort along with knowledge of the ruin’s entrance. What they found buried deep within the ancient site, and their ultimate fate, remained a mystery until now.”

You should probably run in the other direction, but we know you won’t, so instead you’ll be teaming up with an archaeologist and her ghost husband as you make your way through an Oblivion-inspired boss fight, Meridia’s minions, and daedric beasts. Naturally, you’ll be rewarded for your efforts with both unique gear sets and cosmetics – in this time, you’ll need only complete the Veteran mode to snag those cosmetics, a big change over past DLC. Check out the whole preview on the official site. 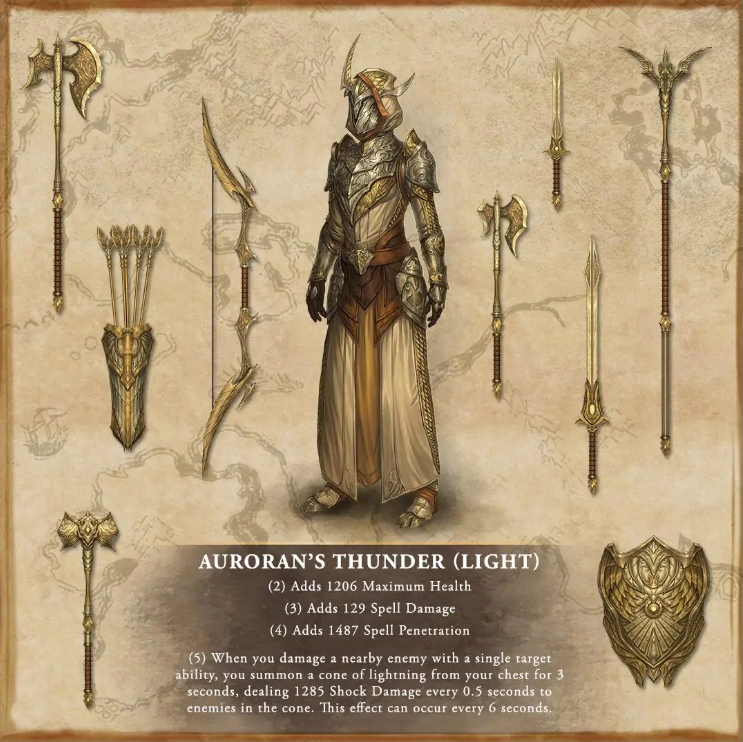 Love how neither expansion so far contained at least one dungeon with it, instead all sold separately as DLCs… ZO$ milking it for real…

Well for one they are not expansions per se, but chapters – so from that perspective it makes sense. For two, if you subscribe you get access to the dungeon DLC which is what you should be doing if you enjoy the game. They aren’t milking anything and quite frankly that hyperbole is getting old.

people call expansions expansions, zos call them chapters, woah… secondly there is no excuse not including at least one chapter themed dungeon along with it instead of selling them separately as dlc. third you dont need to sub to enjoy them game. And milking probably is an old hyperbole in the eyes of the milked.

They are called Chapters so people dont confuse them with normal MMO expansions that include dungeons and other content. ZOS separates that content over the year. It’s how they gave been doing it for a while.

Again the dungeons are only sold separately if you DO NOT sub. They are free for subscribers. So what I’m hearing you say is put one of the dungeons into this chapter because you dont want to sub to get it for free.

Enjoying the game is subjective and separate from the fact that if you did sub you would get the DLC for free.

Bottom line is they are not going to change their model. You have options to choose from to enjoy the content you want. I’d argue the sub is minuscule considering the level of entertainment for the value.

So since I started diving back into ESO a few weeks ago I’ve been doing dungeons almost exclusively, and boy am I having a lot of fun. I’ve been moving in the Healer direction, which is the first time I’ve done that in an MMO since being a full-time healer in LOTRO (Minstrel). So any more/new dungeon content is gonna be welcomed by me!

I havent done a dungeon yet, but to be fair I am low level too. Also remade my chars so I started almost from scratch(the almost is cause I realised my bank was actually an account bank and had lots mats there for crafting – plus I had increased slots). Still I am having fun going through storyline. I am trying to make an Argonian Templar Tank.

I haven’t touched it since late November 2018. I’m waiting for them to do that combat revamp before I play again. I don’t want to ruin my fun with the piss poor combat.

Maybe I haven’t read thoroughly, but I think these are the announcements. I also think I’ve read some other piece somewhere that said they will slow down on content to fix combat and make it fun and enjoyable.

Pokemon Go’s Go Beyond, seasonal events, and PvP season 6 are all live

Albion Online explains the big changes coming to PvP with the...

Path of Exile provides an advance look at starter gear for...