I don’t think I can express how excited I am to bring this column to life on Massively Overpowered. Reverse Engineering covers the one thing I do most in every single game that I play: overthink everything. Have you ever said to yourself, “That’s not how that works” or “I bet you could actually do that in real life?” Then you are going to love this column. Too often I find myself asking, “Do jetpacks really work the way they do in Anthem?” and “What would actually happen to you if you were hit by a frost giant like in Conan Exiles?” Those and many more questions I hope to find answers by reverse engineering some of my favorite “massively” games.

Today’s question has probably been asked by many of you overthinkers — Massively Overthinkers, if you will. I watched the Elsweyr trailer for Elder Scrolls Online with as much excitement as any other Elder Scrolls fan, but of course, I saw something things that made me question how they worked. How does a tablet open a door? Can you really outrun fire? Or probably the most important, how do dragons even work?! So today, let’s reverse engineer ESO dragons.

There are two ways that have been suggested for dragons to fly. The first method is to make the dragon “lighter than air.” The other suggested method is creating lift with its wings. Of course, there could be a combination of both. In fact, the book The Dragon and the George by Gordan Dickson and the corresponding animated movie the Flight of Dragons attempts to science the flight of dragons in a way that combines both methods. But before we dive into the maths of how to create lift, we need to know how much a dragon weighs.

Kaalgrontiid, the dragon in the Elsweyr trailer, is absolutely massive. By all rights, he’s bigger than Alduin from Skyrim, and Alduin is no gecko. Kaalgrontiid falls easily in the heavyweight category, meaning that he would weigh at least 18 metric tons. For those doing the math at home in the US, that’s 39,683 lbs. Although it might sound like a lot, 18 tonnes is smack dab in the middle of the Federal Aviation Administration’s large-sized aircraft. But that also means that lift through buoyancy would be difficult.

Flight of Dragons suggests that helium can be created from limestone. Perhaps the author was referring to the helium found in the pores of limestone, but I cannot find a way to easily create helium out of calcite, the most common mineral found in limestone. A natural gas resource must contain a minimum of 0.3% helium to be considered a helium source. Dragons are big, but that’s a lot of limestone to eat in order to extract the helium that way. But maybe there is a way to chemically create helium from calcite that I haven’t found – stranger things have happened.

In an article on How Stuff Works, the author explains how many helium balloons it would take to lift a human. A very cute question. It concluded that it would take approximately 3,571 balloons based on the formula that helium has 1 gram of lift per liter of helium. That means to lift Kaalgrontiid, it would take 18,000,000 liters to heliums, or 1,285,715 balloons. To put that in perspective that Americans might understand: that’s more than 3,000 football fields worth of balloons stacked on top of each other. Kaalgrontiid’s big, but not that big. 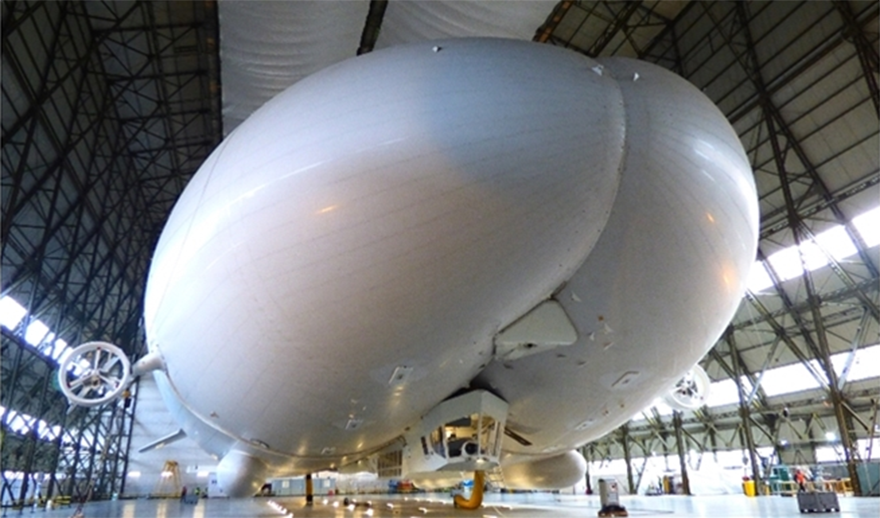 There is another solution

UK-based engineering company Hybrid Air Vehicles designed an aircraft that could lift 10 tonnes and uses a hybrid of helium, turbines, and fluid dynamics to create lift. It’s officially called the Airlander 10, but it’s also affectionately called the flying butt because it looks like a butt from a certain angle. Despite its shape, it’s an engineering marvel, and it might also be our solution to the dragon problem.

According to its specs, 40% its lift is created by the helium trapped in the massive envelope. (Envelope just sounds better than “balloon,” but that’s essentially what it is.) Its elliptical shape helps it to cut through the air as well as the rotating diesel-powered turbines. Although the Airlander 10, can lift only 10 tonnes, there are versions of this vehicle that can lift 20 or even 50 tonnes.

Unfortunately, it’s still bigger than the Kaalgrontiid we saw in the Elsweyr trailer, but it’s closer. From bow to stern, the Airlander 10 sits at 92 meters, just under the 109 meters of an American football field. But it is quite a bit shorter than the 3,000 balloon height that the previous scenario suggested.

If a dragon fills itself with helium, then the fire-breathing part of the equation is simple and also very interesting. In the Dragon and the George, there is an electrochemical thimble in the roof of a dragon’s mouth that adds the spark to the ignition. In order to breathe fire, a dragon simply has to release the helium from the ballonets in its gut.

That design gives the dragon an interesting weakness: It can’t fly if it breathes out too much fire. It would have to grind more limestone in order to replenish its supply. Of course, it could keep some in reserve, but this design does ultimately put limits on the dragon’s ability to breathe fire.

Each of these articles will end with some kind of analysis to determine the plausibility of the introductory hypothesis. If you’ve read the rest of the article, I believe you will know the direction of this conclusion.

Although its possible for dragons to fly and breathe fire, the facts don’t exactly match up with what’s seen on screen. The majority of the volume of an 18-tonne dragon would take up as much as an American football field. The wings, head, and tail would likely be in addition to the main body. There would also be a limit to the amount of fire that a dragon could breathe before it just would not be able to fly at all. It’s possible that this limitation exists, but we have not seen it in an Elder Scrolls game or trailer. Additionally, the Airlander 10 never reached its full potential, having crashed in August of 2016 then was decommissioned in November of 2017.

Like all science, it should be looked at from all angles and is designed to be falsifiable. A hypothesis cannot be right unless it can be proven wrong. How would you design a dragon? What would it look like to you? Are there other approaches that might work? Let me know your thoughts in the comments.

Also, what do you think of this column, in general? Do you like deconstructing gaming worlds scientifically? What other game tropes and designs should I attempt to tackle next?

Have you ever wondered how the worlds of your favorite MMOs would work in the real world? Welcome to Reverse Engineering, in which MOP’s Larry Everett takes apart the tropes, equipment, and worlds from all kinds of massive online games, from dragons to jetpacks. Let him know what you’d like to see reverse engineered next!
Advertisement