Ever feel like you can’t keep up with all the survival sandboxes coming out? With so many, it can be hard to keep them straight much less find time to play them all. My Survivalist plate gets so full some have to go on a back burner as I think, I can check that out later.

Such was the case with Astroneer. With its recent launch, however, I felt it was a good time to jump in and get a taste. And am I ever glad I did! This little space survival game has totally charmed me. Unlike many in the genre, survival here isn’t dark and gritty; instead, it is light and whimsical. (Don’t we have enough dark and gritty in the world sometimes?) It’s a breath of fresh air.

But don’t let the playful appearance and lack of vicious snarling beasts lull you into thinking survival is child’s play. Death is always just a few untethered steps away.

Many times when a game is colorful or light-hearted, it gets instantly dismissed as a child’s game. On top of that, somehow playing or enjoying such a game makes you a baby or immature or some other nonsense. I wish this line of thinking would die a quick death. Seriously, how insecure do you have to be to dismiss something fun just because it isn’t “adult” enough? I mean, we don’t really want to put that “adult” label on everything either, do we? Because that means something quite a bit different. I worry Astroneer might fall into this thinking pit due to its colorful, cartoony aesthetic, relatively easy learning curve, straightforward progression system, and lack of ferocious critters bloodily ripping you limb from limb.

Don’t be fooled. This game is still has depth and is quite fun. It hands you death pretty darn quickly if you aren’t actively working to stay alive. You’ve got falling to your death as well as being gassed, beaten up, blown up, shot, and skewered to death. And let’s not forget suffocating to death — lots and lots of suffocating. There are certainly more ways to die; I just haven’t discovered them all yet. But I am confident I will. 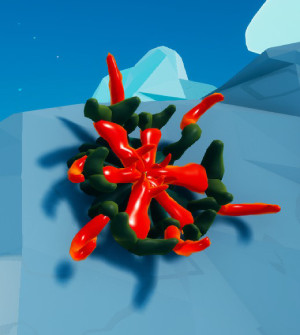 While I said that that there wasn’t any fauna in Astroneer to kill you, that doesn’t killer mean native species don’t exist. They do! The difference with this survival game is that it’s the flora that wants to end your existence. Think of this as a universe of Audreys, lying in wait to snuff you out. Take out falling and suffocating, and so far all other methods of death are plant-derived. Some shoot at you and impale you with spikes while others send clouds of poisonous gas to follow and assassinate you. I haven’t personally run into them all, and I expect I’ll discover even more.

The deeper you go

Even though the game is easy to understand, it has many complexities that add challenge to it. The adage easy to learn, hard to master seems fitting. Just because it is not difficult to figure out how the systems work doesn’t mean playing is a simplistic cake-walk. Two of those challenges actually involve walking. Want to know where you are? You need to figure that out yourself. The worlds are a mix of randomness and structure; they are procedurally generated so that there is no way to run through exploration by rote, but some elements (such as your home base being near a cave system) are set before you start.

There are also no maps, so there’s no way to know where you are except by memory or planting beacons — beacons that you can’t rename and you can’t see from a distance or through any other objects. So good luck finding your home base once you start traveling  greater distances! Prefer to stay close to your base in relative safety? Good luck! You can’t. You have to explore not only to find resources (including traveling to other planets to get different necessary resources) but also to find the research nodes that allow you to start unlocking more craftable items.

Now that you have to go walking around, you can’t just go walking around. You’d better make sure you have the resources to create a tether to your oxygen or you’ll experience that suffocation we were just talking about. No matter how much you want to run over that rise or down into that cave, you need to prepare yourself or risk a likely death. It is tantalizing without being oppressive and frustrating.

Honestly, I’ve really been enjoying the lack of unnecessary exercises in frustration when playing Astroneer. It’s like playing a game is fun! Crazy! I don’t have to beat my head against things to figure them out while still having to actually plan for my exploration excursions. Speaking of exploration, I also don’t have to give up my desired style of play to do another kind until the point in time in the future I can finally work up to my own. I don’t have to slog through leveling and following a prescribed progression path in hopes of later getting to do what I want. I can do it from the get go — just enough to get a taste and really want more — and then have to work to do more. All while having fun doing so. Having to reign in my desire to run willy-nilly about the planet to check things out has been interesting, and that gives me a very real desire to progress so I can explore more. Here, progression doesn’t get in the way of how I want to play; rather it is the very vehicle to do just that.

Have you ever wanted to dig to the center of the world or to the other side of it? I tried that as a kid. It didn’t work then, but the terraforming in Astroneer gives me that chance now! There’s not just a little glee while I blast away at the ground, digging massive holes in the terrain. And it is so easy that it is practically a maniacal glee as I decimate the planet in large sweeping arcs. OK, so it definitely is! But again, I have to monitor my glee to make sure I don’t die from suffocation or sliding/falling down a deep pit where I either land with a splat or lose my connection to said life-giving oxygen. To risk or not to risk: That is a question I have to ask often. And what if I push the envelope a just bit more…

The long and short of it is that I am really enjoying Astroneer. The game is whimsical fun. It has only one stat to monitor, oxygen, so you aren’t struggling with spending all your time not starving or dying of thirst. You get to go right out and explore. And there is so much to explore, from your planet’s surface to the caves to the moons and planets above via vehicles, on foot, or shooting through the stars in spaceships. Fair warning: Although you can play the game solo, as you get further along there is much that is so much easier/better in multiplayer. And you can even all have separate game worlds saved. So grab friends or family — or both — and launch a game. You might find it just as fun as I have.

In the survival genre, there are at least 1001 ways to die, and MJ Guthrie is bound to experience them all — in the interests of sharing them with you! The Survivalist chronicles life and death struggles against all forms of apocalypse, outbreak, mutation, weather, and prehistoric wildlife. And let’s not forget the two-legged enemies! Tune in here and on OPTV to see who feeds better: MJ or the Death Counter.

I should double my Patreon to you just for “Terraforming an opinion” :D

All the video and screenshots of this game remind me a lot of No Man’s Sky. In a good way, though. And the tether mechanic looks interesting.

I’m still a little off as some resources are harder to find (I need titanium so I can make a reusable rocket engine), from before but I do love that I don’t have to eat and drink every 10 seconds and as long as I can reach an oxygen source, I can go and explore pretty much anywhere.

I haven’t been to the arid world yet in 1.0 but it used to have these demonic tumbleweeds that were an especial nuisance.

My son keeps getting frustrated that my resources are easy to find and close by while he has to search high and low for his. I said, of course I have awesome luck — look at my kids! <3

Path of Exile’s developers are working at improving Heist rewards and...