Are you grumpy about how long some indie games take to develop? Yeah, join the club – the indie devs are too.

That’s the takeaway from a long forum post penned by Project Gorgon’s Eric “Citan” Heimburg last week. In response to a player-initiated thread suggesting that Heimburg “refuses” to expand the team working on the game beyond himself and his wife, thereby keeping the pace of update slow, Heimburg lays it out plain and simple.

“The idea that I want to be here coding my ass off at 5am on a Saturday because I insist on doing everything? That’s complete nonsense,” he writes. “I would love to hire more people, and we definitely will. Actually I expect the first full-time developer hire may be possible soon… but I’m not hiring anyone unless I can do it responsibly.”

“I realize you’re all familiar with indie companies that burn their budget fast and end up successful. Minecraft (or whoever) did it, so why can’t we? Because the successful ones are extreme outliers. I’ve been involved in a half-dozen of those projects where indie teams burn their money fast and pray it works out. It almost never works out. I’m too old for that shit, and I won’t keep passing that sort of tragedy on to other game developers, or to you. Because the people that usually lose are you, the customers that buy in early. How many Kickstarter MMOs have failed after reaching their goal? Most of them. But I can confidently say we are not gonna fail. Really! We won’t hit our time estimates at all… but eventually we will make good on our crowdfunding promises. Reaching the finish line is my top financial priority, and I won’t jeopardize that goal. So we hire contractors when we can. And when we can hire full time people — and give them realistic time windows to get ramped up before we expect them to pull their weight — we will! We’re watching our bank account carefully and planning when we might be able to hire more people. I’m optimistic, but I don’t have a crystal ball. When we can hire, we will, simple as that.”

Source: Official forums. Thanks so much, Astrid!
newest oldest most liked

Good on you Citan, my wife and I started our own game development company last year and are taking the same approach. It is always nice to hear about folks who are dedicated to making games and want to make sure they are around for the long haul.

Last time I play Project Gorgon was before it was launched on Steam but I will make sure to pick up a copy sometime this year.

This is madness. It almost reads like they are running a business that has to be forward thinking and financially responsible!!

It’s always as amusing as it is tiring to see that indie/small developers are far better at responsible business practises and both listening to and understanding their consumers than any big business.

This is why many indies do succeed; whilst they might not experience the windfall of profit that a large developer does, they’re also not being irresponsible with spending and fragile, unstable job offerings either. That’s one of the many reasons I tend to prefer buying indie first.

The two titles I’ve played most of late are Eastshade and Little Dragons Cafe; both of which are lovely little indie/small dev titles. And I feel as though they respect both me and their own employees.

Compare and contrast Little Dragons Cafe with My Time at Portia and its developer; I think they had, what, 97 employees? Not only is that the size of a mainstream developer, but just like one they failed to provide stable jobs and even pay all of their employees (in a timely manner or even at all).

My Time at Portia is successful because it’s an AAA title with money to spend on marketing, it’s very popular.

Still, Pathea (My Time at Portia) are hurting their reputation with customers and future employees alike with these unscrupulous practises. So whilst it benefits them in the short-term, it hurts them in the long game. Whereas the indie/small devs continue to turn a tidy profit whilst generating good will. At least amongst their targeted demographics (the ones who pay).

You can see that with Little Dragons Cafe. It had a mixed critical reception, but on sites like Amazon it’s received five stars. And reports say that the game has sold extremely well. They know what they’re doing.

This greedy preference for the short-term does suggest that another video games industry crash is incoming, and the only ones to survive it will be the small businesses with sustainable practises.

So… props to Project Gorgon, then!

I have faith in them that they will pull this through.

I have an issue with the characters that stay in this stupid, annoying posture, like they are on a catwalk or something… it’s really annoying: 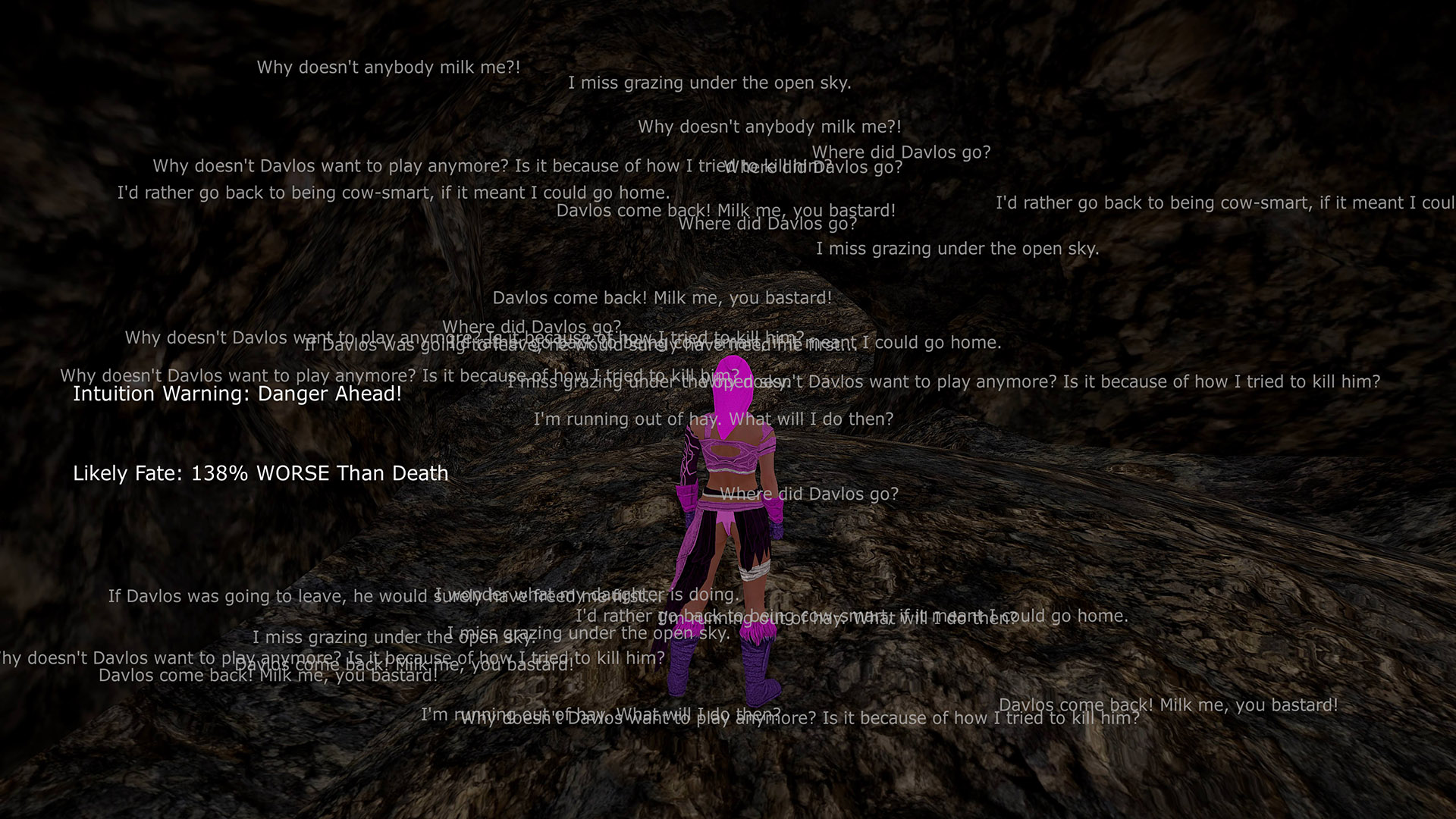 The other is character facial customization, it’s really poor, but I hope that will get addressed with time, other than that, the game looks pretty appealing and I plan to get it in the near future.

the first responsible thing for this dev to do would be to get rid of the ugly ass targeting box that prevents me from giving this game an honest shot.

LoL, no way that box is still there.

i can’t give the game a real shot until that eyesore is gone.

already taking a hit visually from the graphics, but that’s not as important. when a ui feature is that ugly and in your face though… that’s too much.

It’s good to know the game is in sensible hands . I know the scale of the two games are completely different but I think Star Citizens Chris Roberts could learn a lesson or two from this guy as could a lot of other indie developers .

I’m glad that they’re spending time on gameplay and features. They can contact people for art and animation later.

Indie devs burning their money and praying it works out seems to happen way too much. SOS I think was a good example – some quite unique design choices at first made it a fun RP game that separated it from BRs, but it was only ever going to be a niche thing. So the devs decided to bait-and-switch into a full-on Battle Royale that removed the survival gameshow RP elements. The game tanked from there and shut down 3 months ago.

Of course there was also Wild West Online, though in that case the devs were over their heads and were trying to cash in on the idea of a PC wild west game before RDR2 came out. And then there was Hero’s Song, a game that had potential but got shuttered rather quickly before Smed hopped onto Amazon’s game development stuff.

On the flip side though I can see why folks would get annoyed. Some games seem to be in Early Access for way longer than they should be, like 7 Days to Die still has no sight of Beta when the Kickstarter for it successfully funded back in mid-2013, and major updates have been getting slower and slower in pacing (time between Alpha 16 and Alpha 17 was like 14-16 months) as the devs seem to keep overhauling and reworking things that didn’t really need to be redesigned.

Gorgon seems to be somewhere in the middle of those extremes though. It’s got a fairly good flow going, devs are being responsible with their budget, and while they know that they aren’t going to meet deadlines you can at least know that they’re focused on delivering what they promised (and then some).

Yeah me too. I really enjoyed it and was really looking forward to more. /sigh

You’d probably be surprised by how many employees some of those “indies” have, and you’ll notice a link between that and the desire to maximise short-term profits.

The reality here isn’t that indies are burning their money, they’re as successful as they have ever been. I mean, look at Eastshade on Steam right now. No, what’s happening is that we’re seeing more and more AAA developers calling themselves indie, or players assuming that they are if they’re unfamiliar with the name.

Indie is all about scale, and if you have 100~ employes? That’s not really indicative of indie any more as that hiring money is coming from somewhere and thus they aren’t independent. Which is what indie means.

Look at Playtonic as an example of an actual indie studio. It started off with just a handful of devs, following a dream. Over the course of creating Yooka-Laylee, more of the Rare old-guard jumped ship from Microsoft to join Playtonic. And despite that, they’re still at only 25 employees, total.

Indie means you aren’t backed by big money. Whereas all of these games that maximise short-term profits absolutely are.

I totally respect his stance on this. More power to him.

The husband and wife development team is one of my favourite things about the game. They are determined to remain creatively and financially independent! Good on them! :-)

that’s my favorite thing about cube world too- oh wait.

Haha. I heard cube world is getting updates again, but point taken. I hope when the devs of Gorgon want to move on they will pass the game on to others, but it seems they are living out their dream of building an MMO atm, and not ready to stop any time soon. :-)

pg all the way. once they remove/change that targeting box at any rate.

People really hate that targeting box, eh? Gosh. I haven’t played Project Gorgon myself, yet, but with the way everyone is talking about it, I definitely want to look into it.

I mean, I might not end up buying it as it might simply not be for me. It may revel in grind or competitiveness to a degree that isn’t comfortable for me. That’s completely fine! Still, with all of this positivity I feel very inclined to have a goosey at it, see what it’s all about.

If you like crafting, exploring like old school times on open world, being able to turn(through curable boss curses) to animals with their own skills and gears etc it probably will be fun for you. Its a b2p game so its a one time fee

The targeting box is something personal, some of us like it, some of us dont – i guess for those who dont like it they will add the option to remove it in future. I am personally neutral to it – its just one piece of the interface that does its job

Massively Uplifting: Good deeds don’t take the summer off for Bungie, Niantic, and Trolls in WoW

Lord of the Rings Online community reschedules Weatherstock for September