Welp, we’re in the deep end now. Legends of Aria definitely is the sandbox that’s giving me the hard knock schooling on sandbox MMORPG gaming, with its decidedly hands-off approach and design decisions that definitely hearken to ye olde dayes. That’s not to say I wasn’t expecting this, to be fair — I had played the game on a trade show floor before and understood what the devs were trying to accomplish — but dang this is a tough nut to crack.

As per your voting, I followed through with the pre-selected Mage character build. After that, I dropped my character off into Pyros Landing of the Southern Rim and set out to try and find my way in the realm of Celador. What I found was a great level of challenge, but at least an intriguing one and not a terribly frustrating one. So far, anyway. 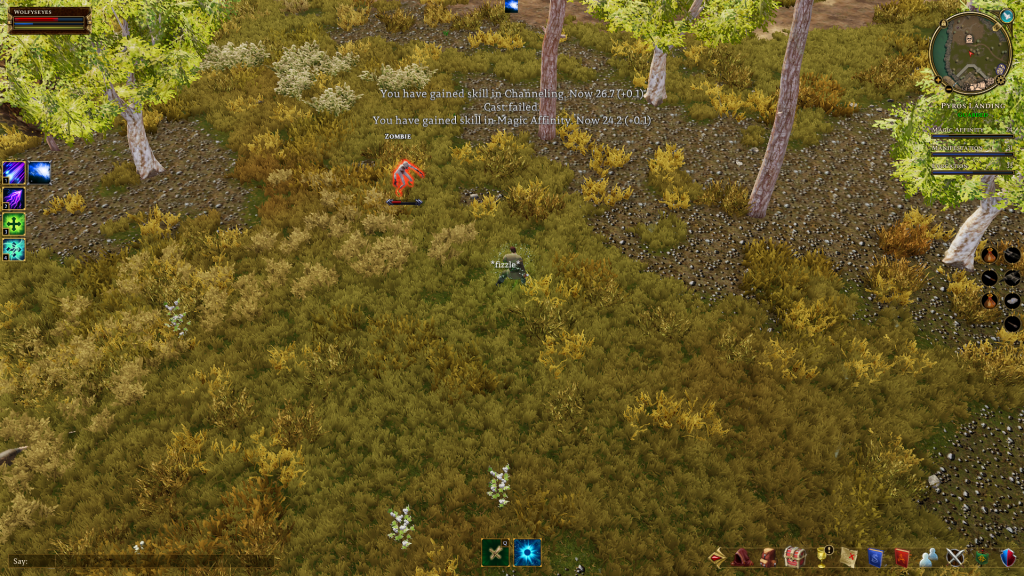 In fairness to Legends of Aria, I wasn’t entirely kicked off of the boat and into the water, so to speak. Loading in to the town of Pyros Landing, I was greeted by a few tutorial bits and a spirit I could call upon at any time to get additional instructions and even a bit of direction. I consulted with the little floating blue mote and elected to head out to a place to hunt, which offered me two choices: a nearby graveyard or a sewer. Since the latter is the in-game equivalent of leavings when compared to others in-game, I decided to head home to the sewers.

It was here that I got my first taste of magic-based combat. At the start, I was granted a sparkly magic missile attack, an instant spell called Ruin, a healing spell, and a poison clearing spell. Seemed pretty generous, and all that was down here were rats and spiders. Easy.

No. No, not so. I don’t know what sorts of things the people of Pyros Landing are tossing down the bog, but these critters were not your garden variety noob fodder. These rats took several strikes to take down… when my spells weren’t outright fizzling, of course. 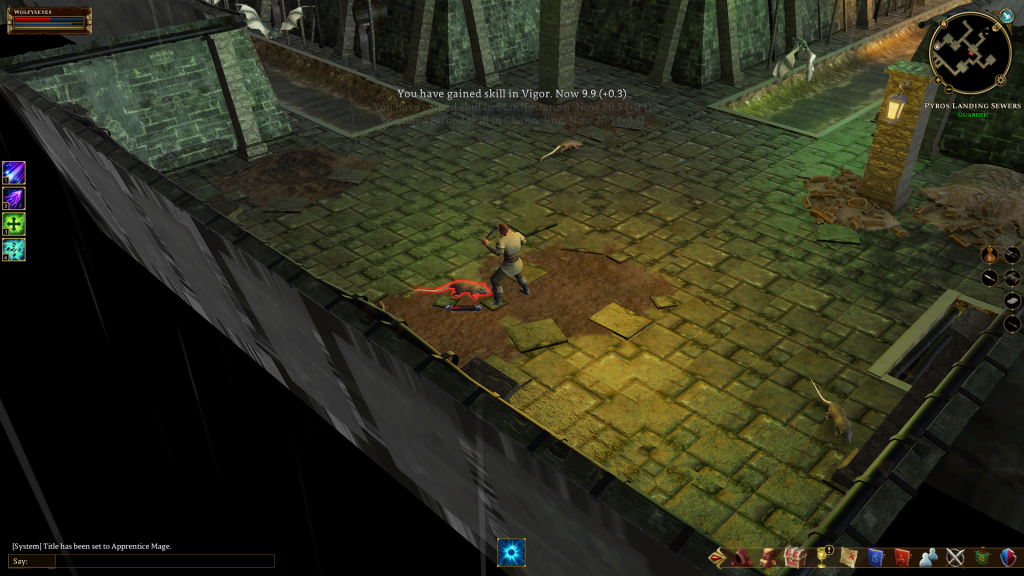 Perseverance and judicious use of my healing spell saw me through a number of fights down here while also helping me get my bearings on combat and skill advancement. Using my skills and even getting nibbled on by these ultra rats saw me incrementally improving my skill in the use of Evocation, Magic Affinity, and even things like Vitality and Bludgeoning, which leads me to think that I wasn’t using the knife that I thought I had equipped and instead have been whaling away on foes with a torch. Nice as this system was, though, it wasn’t exactly filling me with a great sense of personal advancement, so I climbed out of the sewer and elected to head out into the world in search of potentially more rewarding challenges.

The second I stepped out of the safety of Pyros Landing’s walls, I was immediately in defense mode. If rats were a mini boss, surely things out in the woods were worse? My instincts proved right, as bears immediately began to run me down and nearly maul me and coyotes proved to be a tougher fight than I had anticipated.

It wasn’t helping that the two attack spells I had didn’t really seem to be providing a lot of grunt for me. Despite its name, Ruin is barely ruinous and is more like a magical tickle explosion, while the sparkly magic missile attack did good damage but also seemed to take forever to travel to its target, even at close range. Then, after a few harrowing fights with coyotes — a sentence I never thought I’d ever type — I realized that there was a Reagents Bag.

My spells required materials to cast, and I was running low. 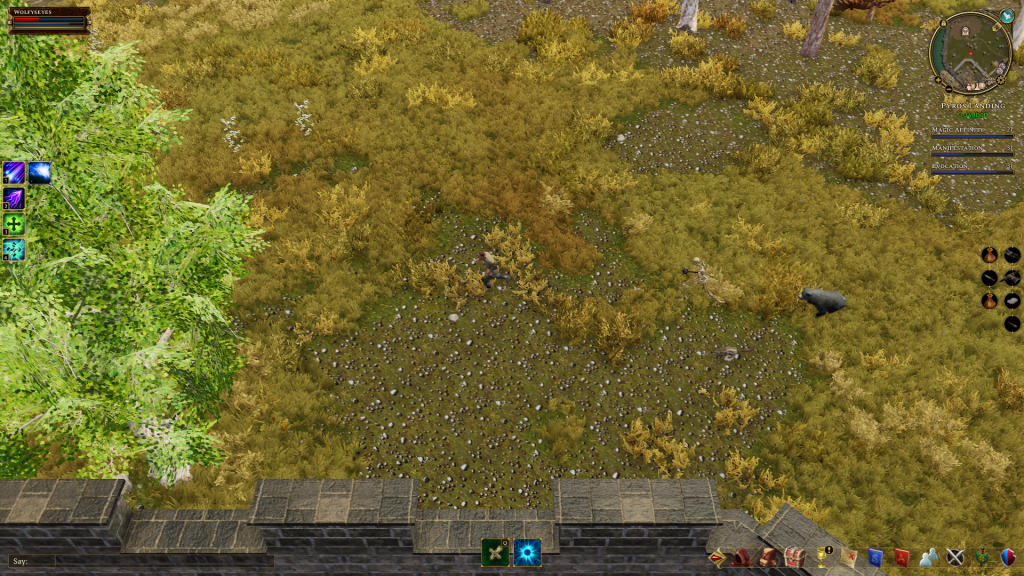 Nevermind skilling up; all I wanted to do was find reagents for my spells now, especially since I was evidently taking on foes with a torch as a weapon. I ran around in a variety of circles and figure eights, looking for as many plants as I could pluck in order to keep my reagents bag full of fuel for my spells.

During my meandering, I stumbled across the graveyard, which featured animated skeletons that ran me down like the T-1000. At one point during my panicked running from the murder skeleton, I managed to also kite a coyote and a bear. Mercifully, I survived the encounter, as the bear started slapping the skeleton and I attempted to kill the coyote. The comedy of errors most definitely didn’t stop there, as at one point when I logged on, I managed to spawn right in front of an orc and into the path of some goblins, which ran me all the way back to the gate of Pyros Landing.

My newbie orbits must have drawn some attention, as I was hailed by other characters during my clearly aimless movement. After asking them where I can find some lemongrass reagents, they informed me of the ctrl button’s ability to highlight nearby collectibles. They even gave me a horse mount and instructed me on how to use it. So, hilariously enough (to me anyway), other players have thus far not been the danger I expected them to be, and I have had more to fear from rats and coyotes. 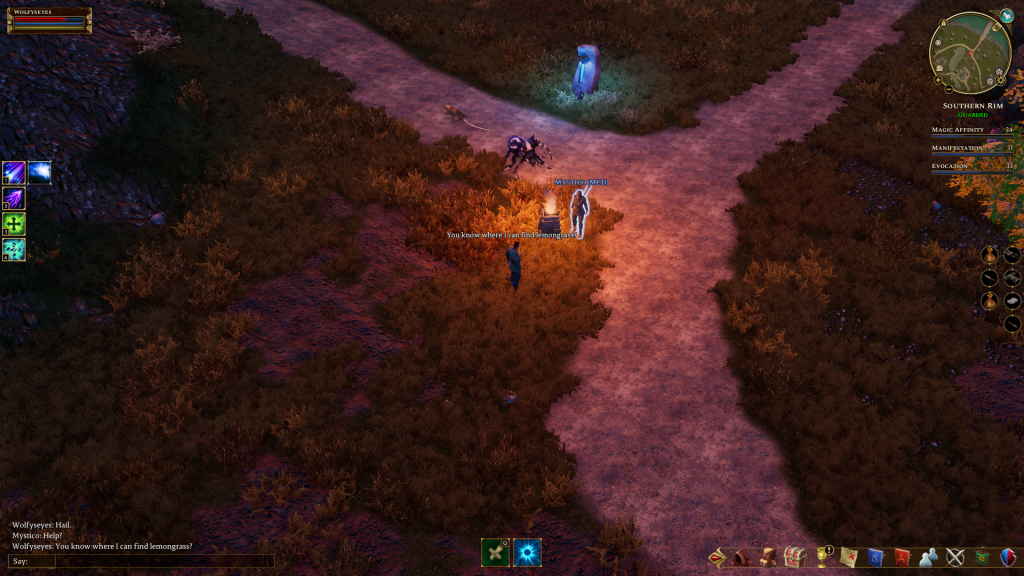 Despite all of this flailing, I still feel like I can make this work and climb the hill Legends of Aria is putting in front of me. Call it stubbornness, maybe, but I prefer to call it an attempted appreciation for what a “true” sandbox MMORPG is supposed to be.

Clearly, though, I need some direction, which is where this round of voting comes in to play. I’m dedicated to following through with the Mage build, but the reagent spell requirement was not a wrinkle I saw coming and so I’d like a bit of advice on how to proceed with my class build:

What should be my combat build priority for my character?

Next is the matter of direction in the more cardinal sense. I figure a bit of skilling up is a good idea, but I also understand that there’s an NPC in the town of Pyros Landing that can offer me a few jobs for what I assume are some manner of rewards. Of course, there’s also something to be said for continuing to roam the area and trying my luck a bit more. So, how about it?

What should I do out here in the Southern Rim? 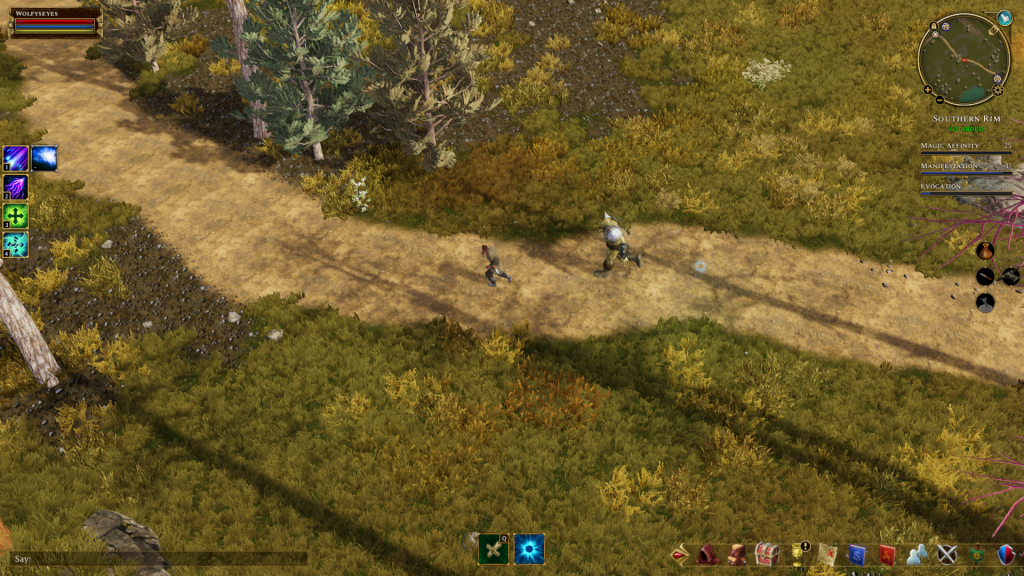 As always, polling will close up at 1:00 p.m. EST this coming Friday, March 8th. Until then, I think I’ll take up that guild invite that was kindly provided in the comments section of last week’s column and perhaps further get my bearings. Until then, remember: coyotes are murderous little suckers.