This is old hat and we all know it, and this is not the issue in Battle for Azeroth. It’s been a problem for a while, but as this is one of the many issues that did not originate with this expansion, it also is not a reason why people are mad at this expansion. No, this comes from the addition of scaling and absolutely no sense that you’re getting more powerful… a problem that Legion managed to sidestep nicely with the artifacts.

And we just spent last week talking about why the Heart of Azeroth doesn’t fill that role. 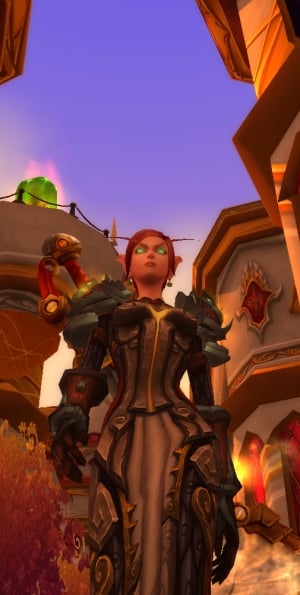 Let’s take a step back for a moment and crib a little bit from a column I wrote back in August about level scaling. That’s a useful point of reference. Within that, I identify one of the two big ways that level scaling can work, but letting your total number of tricks and powers increase even while your level stays on par with the rest of the world. In other words, the stat changes are incidental compared to the overall array of abilities.

This isn’t the only way you can handle scaling, though; both of the online Final Fantasy titles have level scaling in various places that reduces your level down to an appropriate point with fewer tricks but still allows you to still gain rewards appropriate to your “real” level. So your level is capped when it would make content trivial otherwise, but you still have reasons to go back and do other things.

In many ways, the leveling in WoW right now manages to be the worst of both worlds. You get everything around you leveling up along with you, but you also don’t get the sense of having new abilities to unleash on the world around you. Your feelings upon getting a new level are less about “ooh, new ability” and more a matter of “ooh, one more chore done.”

Worse yet, none of it makes old content any more relevant because everything still scales to a cap. Instead of saying, “Hey, if you hate this new area but still have quests to do in the Broken Isles, adventure there,” it just means that you don’t have to do things like paying attention to zone levels or quest levels or whatever. Hitting 116 and having your legendary items “turn off” makes you feel notably weaker from leveling up.

Add in the unbelievably stupid I-can’t-believe-this-is-still-in-the-game fact that enemies scale with your item level, and your goal is generally to “fool” the game into thinking you’re as weak as possible. This means that the idea of being excited by a random good drop is not just removed, but inverted.

This has actually prompted some players to say that the problem is level scaling in general, which is one of those ideas that I disagree with… in concept. But again, scaling wasn’t introduced with this expansion but with its predecessor. And here’s where I do have to mention Legion a bit more because it managed a graceful sleight-of-hand with Artifacts so that you did get that feeling of powering up even with all of that worthless leveling.

In the course of reaching a level in Legion, odds were that you’d gain two or three levels in your Artifact, which would at minimum mean a 10% boost or so to a primary damage ability. It wasn’t major, but it contributed to the feeling that “oh, I’m definitely stronger, even if I’m pressing the same buttons to hit things that are the same level as I am.” You felt at all times like getting stronger made you stronger, even if really you’d be equally strong at level 100 with the same level of artifact.

Without that particular trick, you shine a spotlight on what you don’t get. No new tricks, no new attacks, no useful extra abilities. And this makes something that the game already seems to feel is a chore into an exercise of continually getting weaker.

Not to put too fine a point on it, but players in WoW like to get stronger. Things that make you feel stronger are good. And that is one of the core conceits of the game. It’s a power fantasy, which is both understandable and positive. You get the newer shiny thing and use it to blow up a boss, which gives you a newer and shinier thing. Things that make you weaker are bad and need to be avoided.

So it kind of turns the game on its ear – in a bad way – when one of the core things you’re supposed to do in the game (leveling) makes you weaker (bad thing, must be avoided). It hits that unpleasant part of the lizard brain where you may know you should just move through it, but you become actively opposed to leveling up further because weaker bad. But you have to level up to play the game, so weaker… good now?

The term “ludonarrative dissonance” gets thrown around a lot as a term for game critique, but this feels more like ludomechanical dissonance. What you’re doing in play feels like it’s directly at odds with what the mechanics are telling you that you’re supposed to do. As a result you have this weirdly anxious feeling where the game doesn’t work like you feel it should even as it’s obviously working the way it’s supposed to.

This is also an unfortunately deep hole that the designers have dug for themselves over time, and if you want to think that it’s a known issue, just look at the talk of a “level squish.” In the broadest sense, yes, this would “solve” the issue by allowing these abilities to be spaced out more properly, but it’s also telling that the game doesn’t really have 120 levels worth of power to hand out. The numbers keep going up, but the game doesn’t support them, and the developer don’t seem to have a plan beyond squishing the numbers when they get too high.

Of course, leveling also has the benefit of giving you stories to explore, right? That’s a good thing! At least, until you start exploring that storytelling… and wouldn’t you know that’s a segue into our fourth installment on this particular series. Said fourth installment is going to need to wait just a hair, though. Feedback, as before, is welcome in the comments below or via mail to eliot@massivelyop.com. Next week, we’ll take a look at the patch hitting next week; after that, it’s time to talk story, and also time to do a whole lot of extra work for what will probably be diminishing returns. Oh, well.

WoW Factor: Why people are mad at Battle for Azeroth, part 5: Conclusions and peeling the mask - This week, after some 7000 words on this particular topic, I'm starting off by acknowledging what should be a rather obvious fact: My series does not cover all of the…

WoW Factor: Why people are mad at Battle for Azeroth, part four: Story - The fun thing about bringing up the story of World of Warcraft is that you inevitably have some folks who will immediately crop up and claim that they don't care about the…

WoW Factor: Battle for Azeroth’s alternative story experiment - As part of a WoW Factor column experiment relating to our March 2019 article, we've taken a stab at an alternative version of WoW's plotline.

WoW Factor: Why people are mad at Battle for Azeroth, part three: Leveling and scaling - Remember earlier this week when I was talking about the difference between leveling as a part of the game vs. leveling as a chore? We can all agree that World of…

WoW Factor: Why people are mad at Battle for Azeroth, part two: The Heart of Azeroth - We're continuing on in our tour of why people are upset about the current World of Warcraft expansion, and I think it's important to note that most of these systems are…

WoW Factor: Why people are mad at Battle for Azeroth, part one: Combat - One of the complicated challenges of writing about World of Warcraft is sorting out the stuff that's happening now from the stuff that's been happening the whole time. To use an…

Dungeons and Dragons Online delays Isle of Dread to June 22,...

The Daily Grind: How long are you willing to wait for...