I have to say that I would be much more likely to take up the crimefighting life if there was a really hip rec room that which to retire after a long day of KAPOWs and CRACKs. Of course, all us supers would be trying to one-up each other and wave our powers around like the egos they are, but it’d still be cool.

Hikari found such a place in City of Heroes: “Since Eliot and Justin have the new Into the Super-verse column and the talked about Paragon Chat, who can forget the first time they found the Cryptic Lounge? TV, couches, Arcade games, Pool table with working balls (sorta) and a badge totally confirming this was an Easter Egg outside normal gameplay. I jumped into Paragon Chat to recapture the moment.” 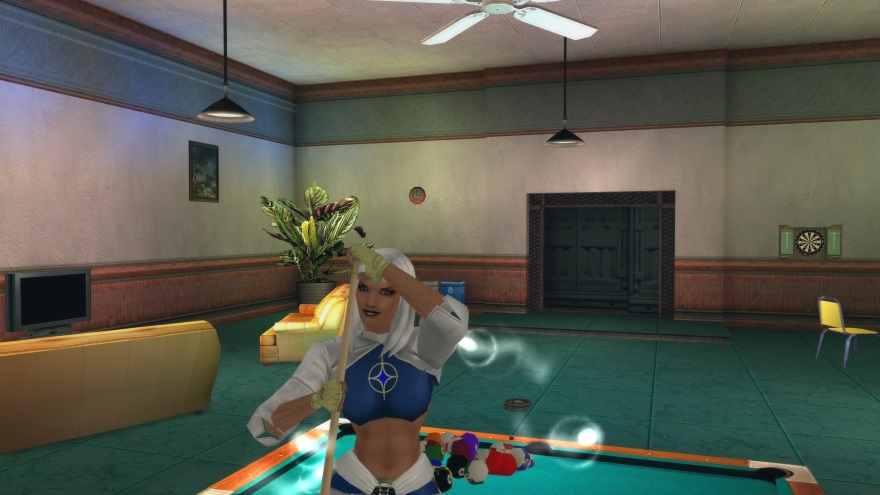 RRC4ever is having fun decking out his homestead in Shroud of the Avatar. What lies around the corner? Oh, wouldn’t you like to know!

“Here is a housing system-themed pics from my first SotA house,” RRC said. “A row lot size (smallest house) stone house. It’s still not fully ‘equipped,’ but I took pictures of the outside, the neat fireplace on ground floor, the kitchen ground floor (and hatchet to basement next to it), the top floor with its bed, and the basement full of crafting stations. It’s a crafter’s dream house.” 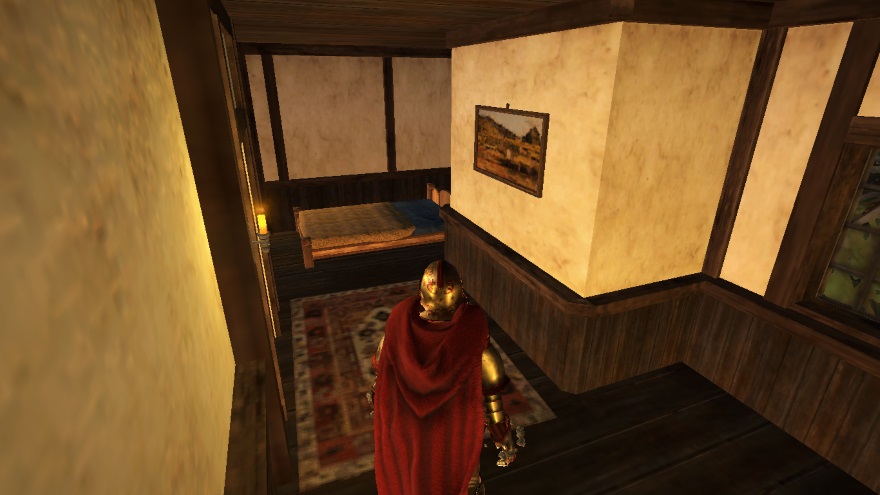 Wonder Llama is back, and you will not be able to stand the fidelity that is about to hit you: “Warframe has a pair of cinematic quests that are just amazing, ‘The Second Dream’ and ‘The War Within.’ I took a lot of screenshots as I made my way through the quest-line, but most of them contain spoilers. Out of all the screenshots I took, I though this one looked sufficiently fierce and spoiler-free. This is my Valkyr Prime warframe powering up for the final battle. Spoiler Alert: We won!”

Dude. What did I just say about spoilers? You have to use animated gifs next to them to really draw the eye! 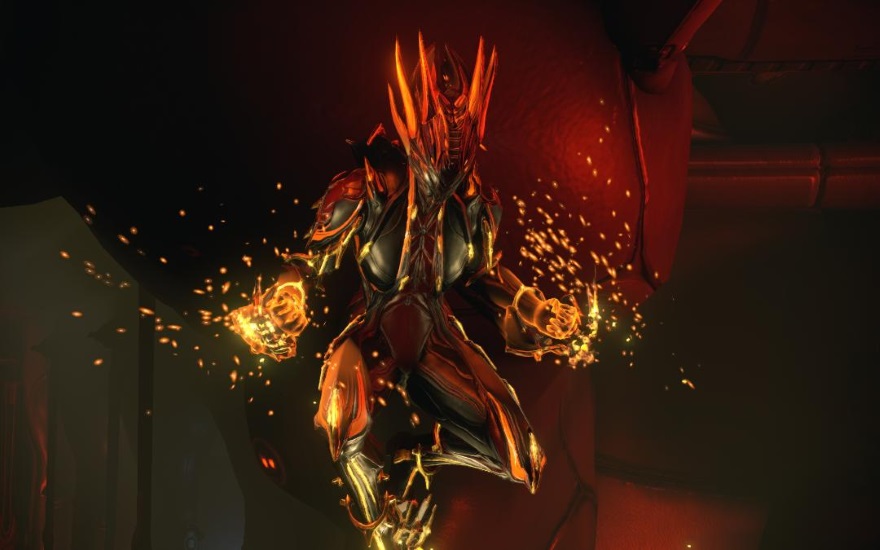 Holy crap, Rafael is playing something other than Blade and Soul. Look outside, people, because your skies will be dripping with blood due to the advent of the apocalypse.

“While investigating the Ruins of Shadowmark, I found this awesome relief etched in a cliff wall. I think it is General Tarsis for those of you who might be playing. And that’s one thing that keeps me going exploring the free play area. There are many mysteries in the Anthem world. Many of them are out there in the wilderness if you are willing to look.”

Many mysteries. Many giant noses to pick. For nose gold. 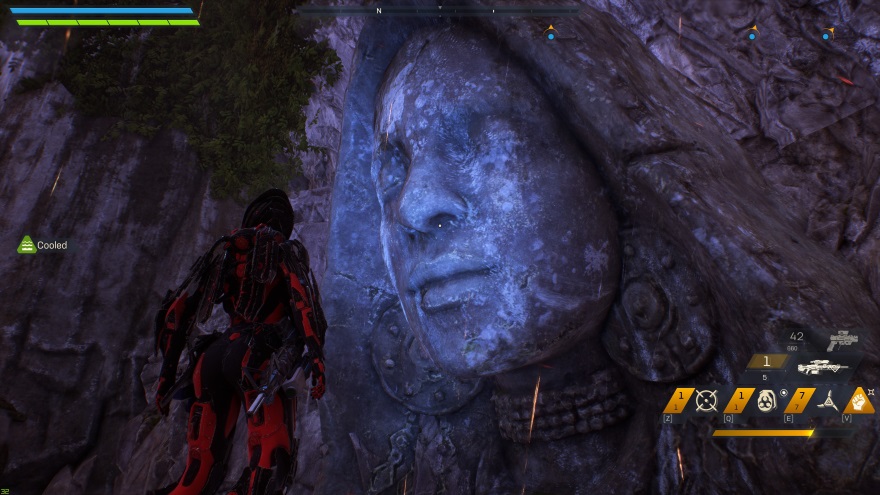 “Yo, Boralus, I’m really happy for you, Imma let you finish, but Stormwind is one of the best Alliance hubs of all time! One of the best hubs of all time!” crowed Pepperzine. “Feeling nostalgic waiting for classic World of Warcraft. In the meantime, I’m leveling my Hunter alt who always travels with a pack.” 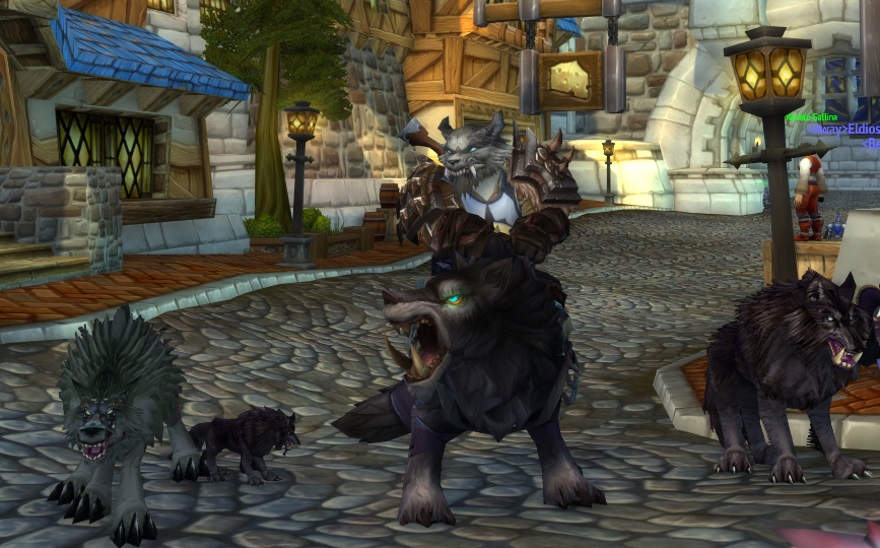 I got it, and you need it — a weekly screenshot challenge, that is. Usually we focus on the sense of sight for our picture-taking, but this week I want you to use your imagination and engage your sense of smell. Post a picture from an MMO and tell us what you think it would smell like!

This will be the week this column gets zero contributions. Way to go, Justin.

Lol! Why yes. Yes indeed! I’m not playing BnS at the moment. I’m in Anthem fighting for loot. Heh. It is a good fight.

BUT, I will be back in BnS by Wed. of this week. Awakenings are dropping and so is the Lyn Warden with a new level cap.

So you can look forward to screen caps documenting my fun in BnS in the days and weeks to come. Heh.

From my adventures in Diablo 3: the Hidden Camp smells like spices and incense and Whimsydale smells like Skittles and blood.

Smells a little like… tossed salad served with rare meat!

And for smells … this has got to be a doozy.

And they say Velia smells fishy!

And for good measure: here is BDO 4k Ultra mode, for some EXTREME fishing action.

I had to laugh at the Buzz Lightyear paint job: it takes some effort, but you can make some really outlandish characters if you want to.

The other two are just atmospheric shots, because some times you pull your eyes away from the action for a minute and remember how gorgeous the game world is.

Last one is I finally got an action shot of the suit launch cinematic that only plays when the game is searching for a match … for the love of god why doesn’t Bioware slow that bit down and then play it while the game loads. Having something else to watch besides the same 5 splash screens would be such a relief.

So it’s a choice between, “You smell funny,”… /eww

I’d imagine this place to have a predominant musty odor with a slight hint of rotten fish.
(Lotro, Gollum’s cave)

That’s… a fascinating challenge. For as much as we get the full audiovisual experience, I’m kind of at a loss at where the sense of smell comes into play in worldbuilding. I mean, Smell-O-Vision isn’t a thing (yet) but there’s plenty one could do with descriptions and NPC chatter.

On that note, I went back beneath the brances of the Pale Tree to get this shot of the local eatery. I already imagine the Grove has a pleasantly flowery scent, but throw in some honey nectar chicken and I’d imagine you have a kitchen to make even Gordon Ramsey feel right at home.

PAX East 2020: Guild Wars 2 teases Visions of the Past: Steel and Fire video

Massively Overthinking: What one piece of knowledge would you like to impart to new MMO gamers?

Anthem marks its anniversary by handing out free Javelin vinyls

The Stream Team: Tombstone tipping in a Neverwinter cemetery

Massively Overthinking: What one piece of knowledge would you like to...

Riders of Icarus releases its newest patch, Call of the Wild

Star Trek Online starts off another event campaign with a return...