So, full disclosure here: This edition of Choose My Adventure is going to come from a perspective of limited play time. My “real” job and other projects effectively ate up the vast majority of this past weekend that would have otherwise been sunk into Legends of Aria. That situation is improving, though, so I will continue to follow through on the voting public’s wishes of combining arms and magic for the foreseeable future, as well as picking up missions.

Ultimately, the vote to introduce melee weapons into my tool box turned out to be extremely beneficial to my character, as foes that were previously really dangerous to me turned in to surmountable challenges. That made me pretty proud of myself overall, and we all know what comes after pride. Or in the case of the picture below, “Yup, that’s me. You’re probably wondering how I got here.” 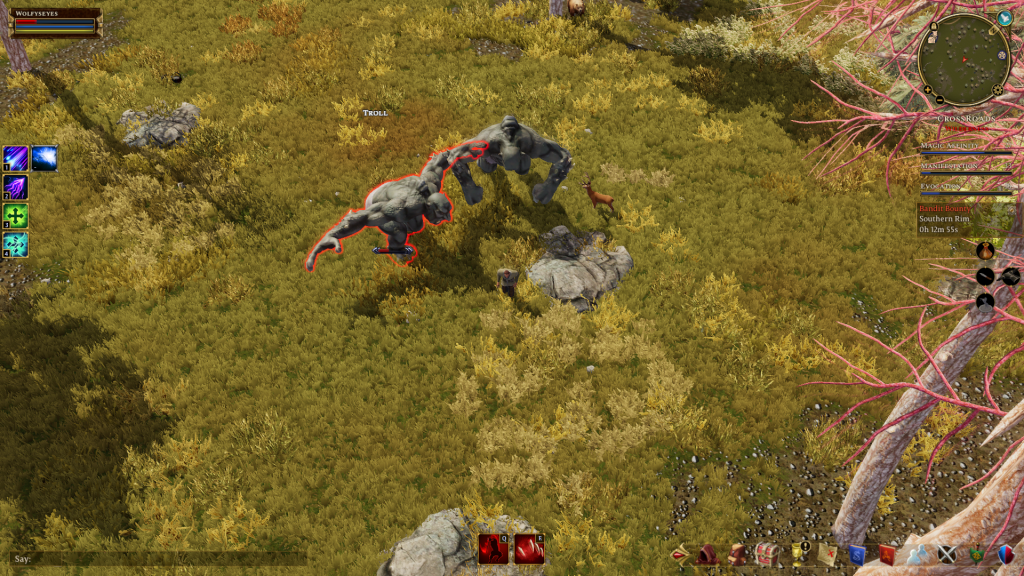 My first move was to see someone about training up in Slashing and Heavy Armor to see if I could perhaps streamline the whole process. Unfortunately, the prices being asked by the trainer in Pyros Landing were out of my budget, so I had to do it the hard way: buy a pair of heavy armor pants and a longsword and head out into the wilds to skill up.

The difference in damage output was tangible; not only was I able to take on the previously fearsome coyotes and giant rats, but I didn’t have to use reagents to do damage. Even the two skills that I auto-magically got when equipping the sword made a significant impact, with either a leaping stroke that tore off a nice meaty chunk from the target’s health bar, or a slow bleed that compounded my basic damage. Combining these new tools with an occasional spell or self-heal meant I was putting down wild animals left and right.

All right, not bad, I thought to myself. Let’s try to amp things up. I next decided to take on a bear, which was a previously unattainable enemy type for me as a pure magic caster. This foe wasn’t quite as trivial, but it was just a hair below the threat level of a coyote to me. I took a number of bears out. Things were looking up big time. 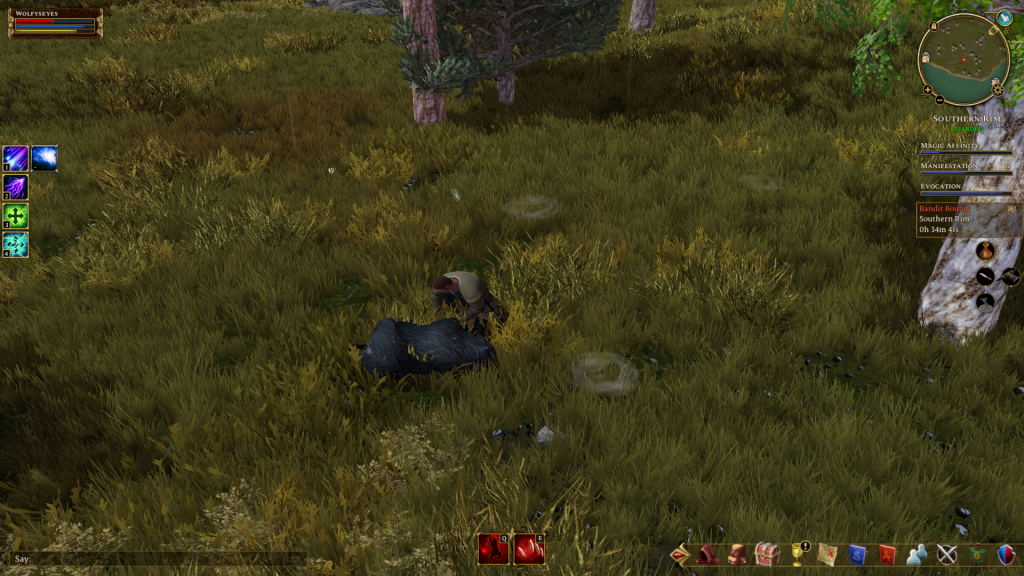 Brimming with new confidence and a sense of improved strength, I headed back in to Pyros Landing to get a mission from the relevant NPC. These were pretty bog standard offerings of the “kill 10 rats” variety, but without a specified number. There were three options on hand: take out bears, take out wolves, or take out bandits.

I chose bandits. Mistake number one.

Heading out of Pyros Landing and to the general direction of the bandits in question, I decided to try and save a bit of time and fast travel to the Crossroads, which was closer to the map marker that indicated the bandits’ location. Mistake number two, as actually walking there probably would have had me face several more creatures to skill up on en route. That said, I did run into a new enemy type in the form of wolves that I was able to take out pretty handily, which only further fueled my self-confidence. 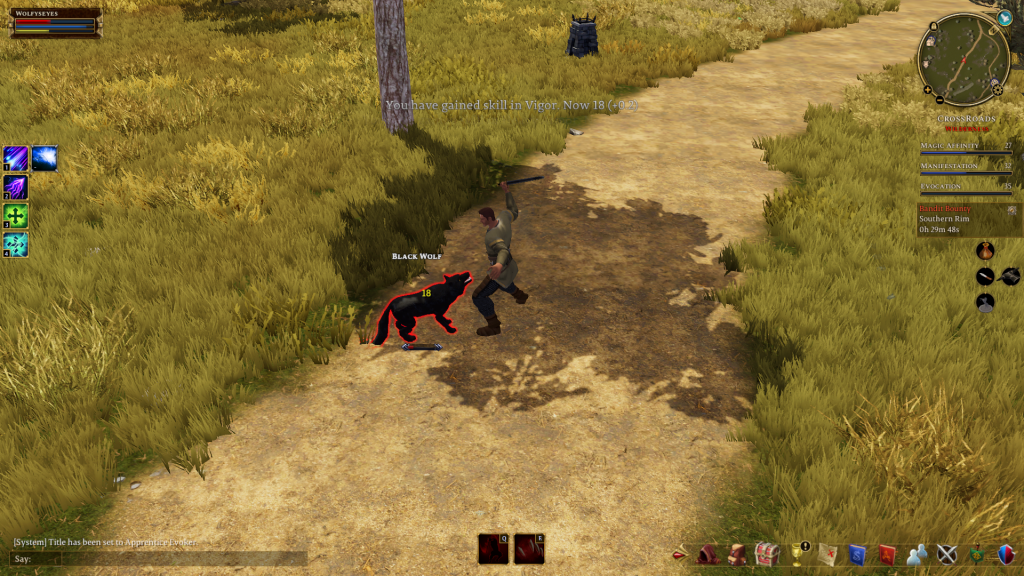 I finally got close to my target and was met by extremely angry foes and nearly instantaneous regret. Attempts to try and pull one bandit only saw two of them rush me, and my hubris actually saw me attempt to stand my ground and fight through it. You probably can guess how this went down.

Death in Legends of Aria follows the same old-school rules of MMORPGs of yore. First task was to run myself to the nearest Resurrection Shrine to return to a corporeal state. Doing so saw me run across an even more impressive enemy type: a huge troll that was keeping itself amused by lumbering around and punching bears and deer.

These things are massive. Bigger than anything I had faced before. On the other hand, they also appeared to be wearing what looked like tighty whities. I was struck with a baffling emotional cocktail of awe and amusement. 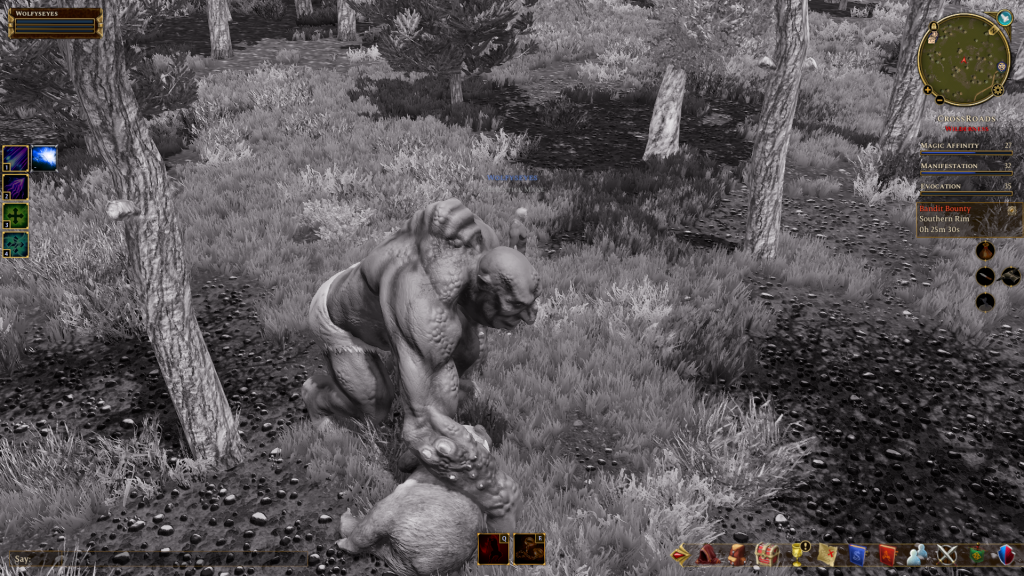 After resurrecting myself, I found my second task was to run back to my corpse and loot it. Naturally, this was a challenging endeavor as I idiotically didn’t try to run away from the two bandits that were slashing my poor avatar to ribbons. I was successful, however, using the extremely brave tactics of running to my corpse, plucking a few items from its backpack, then fleeing my naked butt away from the bandits until they stopped giving chase. I’m not proud of my exploits, but I managed to pull the gambit off.

Having learned my lesson in regards to bandits and summarily dropping the associated mission, I decided to sate my curiosity regarding the massive trolls in the area and explored further. Trolls wearing medieval panties aren’t a thing one sees every day, so I had to see what was going on.

Mistake number three: These things are obviously aggressive, but they also have an extremely long chase leash. My curiosity was met with long sessions of fleeing that saw me kite other creatures of the woods. There were a couple of times when the animals that came along for the fun run attacked the troll, allowing me to get a few shots in, but then the troll would win the fight and turn back over to me.

This, of course, leads us right back to the twin troll situation, as I managed to kite another massive new friend in my attempts to run in terror. I did try to take a few swings at them, but I finally gave up the ghost and just ran, weaving between the trees to grant myself enough distance. 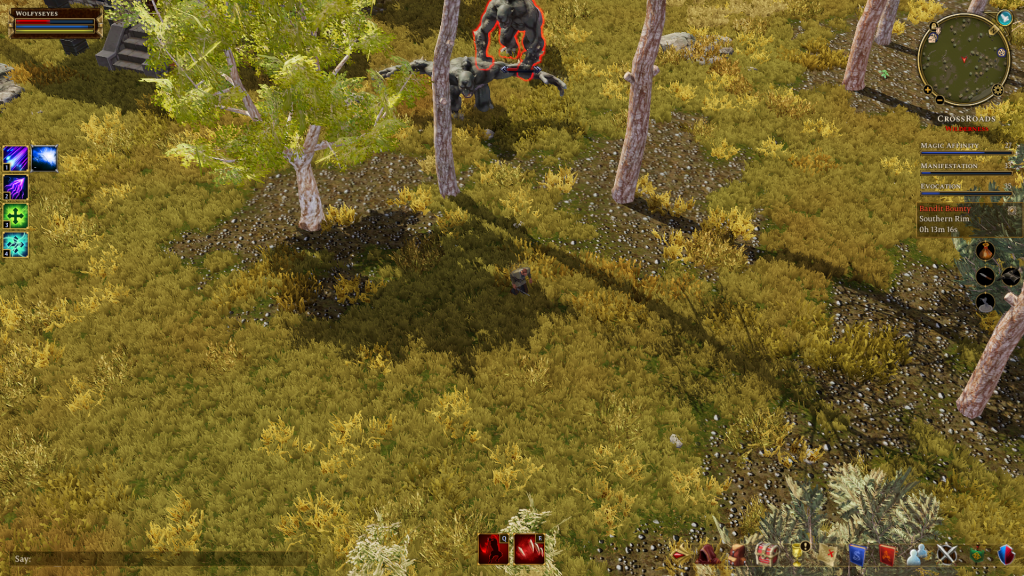 Taking stock in all of this, I at least now know what death in Legends of Aria looks like. So, that brings up today’s poll. It’s a simple one, I’ll admit, but I’m interested in knowing what you all think should happen next.

Clearly, this isn’t a game that one just dips in and out of, and so there’s certainly wisdom in narrowing my focus on combat, skilling up my character, and otherwise trying to not overstep my boundaries. On the other hand, there was also some very good advice in the comments about making mule characters, and I am curious about what crafting is all about. So, what should be my primary focus going forward?

What should be the next step in my Legends of Aria adventure?

As usual, voting will wrap up this coming Friday, March 15th, at 1:00 p.m. EDT. In the meanwhile, I’ve reached out to reader IDiivil for aid and will continue to just roam around and maybe skill up a wee bit now and again.

Woo, this stuff is hard.

I think, since its a limited time tryout of the game for you, its best to experience a bigger extent of the game, so, since you have seen the barebones of combat from 2 different combat styles it may be time to check on crafting

or a slow bleed that compounded my basic damage

To apply a bleed, you sacrifice a regular damage hit. On top of that, Bleed does less total damage than a regular hit. It’s used as a caster interrupt (each tick interrupts their casting); any other use is a waste of stamina and a loss of damage.