If you’re gonna be an MMO, we wanna see massive: lots of people on a server, lots of people in a fight. Dual Universe is clearly heeding that call, as the single-shard alpha MMORPG is today spotlighting a recent event during which it put 30,000 “concurrent simulated players” along with real live testers on the same planet to roam around.

“By showcasing that the proprietary server technology behind Dual Universe is capable of handling at least 30,000 simultaneous players in one unique game world, Novaquark not only shatters the limits of what games currently offer, it also demonstrates that players can expect meaningful interactions at scale, when the game enters beta in 2020,” the studio’s press release declares.

Novaquark’s Jean-Christophe Baillie further suggests that the number of players “able to interact with each other at any given time in the game will take the core elements of gameplay such as exploration, trading, PvP combat and crafting, to a whole new level.” Indeed, the PR compares its headcount to EVE Online’s record for the largest PvP battle – 6142 people – though worth noting is that in the included video, the bots are sort of swarming around, not fighting, and it doesn’t appear that all 30,000 are visible at once, which longtime MMO players know is a whole ‘nother level of potency. 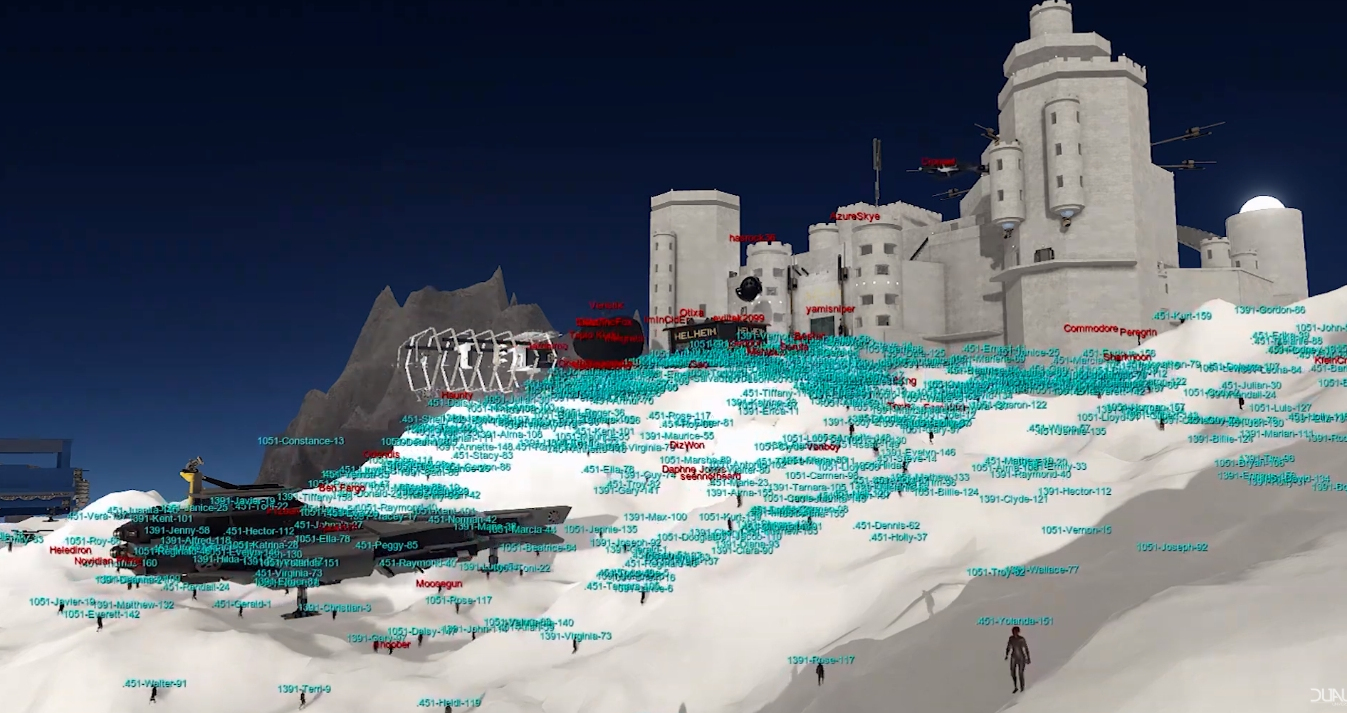 That’s a lotta bots and peeps – we’re guessing the rest of the 30,000 are elsewhere on the planet. Check out the video:

I do not care about BOTS, Bots don’t connect from the middle of nowhere and then drag everyone else connection down. When they do those Bot connections its usually on the Internal LAN that Not the same as 30,000 spread all over the world all hitting the same Pipe…this is WHY all these Online games have a meltdown On Day One thru THREE, because they run these tests declare it ready for launch and then this it goes to POOP! POOP I SAY!!! ATLAS being the latest WE CAN have Over XXXXX Players on at Once we tested it!!!

30,000 walking bots doesn’t mean much. Not anywhere close to the server stability needed for thousands yet alone 30,000 players involved in combat, using their ui’s, typing, etc. CU’s testing using bots simulated to use more server load than the avg player is more impressive.

Well, 30,000 on same planet does not mean the server can handle 30,000 in a single location. But if they manage all related transitions seamlessly it’s still pretty cool.

What was that MMO that you clicked on the player to see what they were selling, the idea is so laughable when you watch this. “Only 3000 more to check.”

Kind of puts yesterday’s ‘200’ achievement into perspective, doesn’t it ;)!

Hmm, predicting beta start in 2020, not sure SC has done the same yet.

30K sounds good, but I suspect a bit of a shell game.

The real question is how many can interact in a single location?

The “world” could be broken down into separate regions with much smaller limits.

Also, bots are not players, CU demo’d 3K bots back at their KSer, six years later they are still fine tuning to run 1000 well.

squee! this game is my New Hope ™. it looks mighty interesting, hopefully not completely ruined by non-consensual PvP.