Sometimes when an MMO adds new zones, previous ones are left behind and seemingly forgotten when development moves on. I am not naming names, but we all know examples of these early game zones that could use some of modern technical love and attention. Such isn’t the case with Warframe, however. Although Plains of Eidolon, the game’s first open world area, launched a only year and a half ago in October 2017, Digital Extremes has taken what it has learned from developing last fall’s Fortuna and returned to the earlier zone to improve and enhance it.

END_OF_DOCUMENT_TOKEN_TO_BE_REPLACED
While the official title is Update 24.6.0 Plains of Eidolon Remaster, I call it the Plains of Eidolon Beautification Project. Two guesses why — and the first one doesn’t count! Yes, the eyecandy of this zone was definitely enhanced. But true beauty is more than skin deep, and this beautification goes beyond the surface; plenty of gameplay was enhanced as well. You no longer have to spend all your time on the frozen surface of Venus to enjoy some of Fortuna’s fun new systems. Eidolon also has some new toys of its own just waiting to welcome players back out in the field.

OK, so looks aren’t everything, but how a game world looks has a lot to do with how we feel when in it. And even though I couldn’t put my finger on it immediately, running through the Plains was a much better visual experience after last week’s update — the land just felt more real and alive. This surprised me because I didn’t recall Eidolon feeling especially fake or lackluster; in fact, my memory was that it was fine. So why the very visceral feel of change? Having not spent a ton of time there previously, I wasn’t trusting my instincts, so I had to stop and think about it (and peek at a couple of past OPTV streams) to make sure I wasn’t just imagining this difference. I could feel it, but was I really seeing it?

As I ran through the zone more, my eyes caught on the details. No, I wasn’t imagining it! The foliage is so detailed now, and the terrain textures are improved. Little butterflies flutter about breathing ambient life into the area. And the lighting! This change was one that registered in my mind long before I could pinpoint it; the dynamic lighting and the alterations to day and night really changed the look and feel of the land. And all these changes come across as natural instead of jarring.

To be quite honest, I’d say the fact that I could immediately sense the difference but not just rattle off some stark, blatant changes makes the update all that much more impressive to me. That I could feel the change before my eyes registered the individual components made this beautification a work of art. To me, art is something you experience, not just view. And Eidolon’s new beauty was definitely experienced.

The value of Eidolon wildlife

One of my favorite Fortuna activities is now possible on the Plains of Eidolon: conservation. Instead of just tromping across the landscape decimating everything that moves (except Grineer, always decimate Grineer!), you have the chance to tranquilize wildlife to aid in relocating and saving them. Although you don’t actually need Echo-Lures for critters here since they freely roam the areas, you can get some from Master Teasonai. Using lures will bring the critters scampering to you. Master Teasonai also offers rarity boosters as well as rewards for your efforts.

What, you thought internal satisfaction of your good deeds would be its own reward? Well, besides that you can also earn a new conservation badge and floofs. Floofs! If you don’t yet have floofs you are sorely missing out! These cuddly critters are the best, and DE would make a killing off me — and I am sure many others — if the studio would go ahead and market some real floofs. I am telling you these things would put me in plushy heaven! 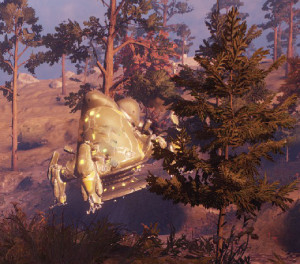 Although I am not a fan of the name (only a certain fluffy bunny should have it!), my first foray into the new Plains of Eidolon included a hunt for the new Tusk Thumpers. These giant machines are a new threat to players as they wander the landscape. These are mobile defense platforms that come in three sizes with increasing difficulties. The Tusk Thumper is the first and easiest machine to face. Next up is the Tusk Thumper Bull. The most difficult stomping menace is the Tusk Thumper Doma. Players will need to discover these machine’s weaknesses in order to defeat them, and the quicker, the better, since the longer a Thumper is fucntioning, the more likely it will be able to call in drone reinforcements.

Creative mode and so much more

That might all sound like a big update already, but that barely scratches the surface. There is so much more to Update 2.6.0! There is no way I can list it all here, so you can catch all the details in the official patch notes (warning, it’s a long read), but there are some highlights that really caught my eye.

First up is Creator Mode. This new toggle setting was created to allow content creators, like streamers, do their thing without distractions and spoilers. No spoilers? Sign me up! When on, this mode makes the following changes:

Next, we have remote missions. Conservation isn’t the only Fortuna feature to now grace the Plains; one of the best additions is the ability to nab new missions out in the field instead of having to run back to Cetus every time. This change was a very pleasant surprise I stumbled upon while playing that I’d missed when reviewing patch notes.

If you’ve played Warframe for any length of time, you are likely familiar with Fashion Frame. Customization is important to many players. And with this update, a secondary energy customization slot has opened up in the Arsenal as a free added bonus when Forma’ing gear.

A very exciting and happy change for me is also in the customization department (real surprise, right?); instead of being for the Frames, however, it’s for the orbiters. After the disappointment of my Christmas light interior disappearing, I was so thrilled to discover that a new setting allows you to store and swap out interiors instead of having to get rid of and sell them. Just go to Equipment > Landing Craft > Interior and decorate with your favorite theme regardless of the season.

Money matters too: For those who need inventory room or just want cash, fish meat and fish oil can both be sold for 100 credits each.

And finally, we’ll end with the news that players can make their Buried Depths: Thermia Fracture experiences more challenging. The time needed to complete four fractures has also been reduced.

Remember, there is tons more, so feel free to go wander the patch notes to read up on it all, or just go wonder the Plains of Eidolon and see what you can discover on your own!

Pick a ‘Frame, any ‘Frame! The Warframe galaxy is in danger, Tenno, and Space Mom needs help to combat it. Are you in the right Warframe of Mind to join in? MJ Guthrie has enlisted; she suits up in her favorite ‘Frames biweekly to fight the good fight, blasting the Grineer and Infected into smithereens.
newest oldest most liked

Maybe it’s just bad eyesight or something but I almost never see a graphical remaster of something and think to myself, “wow that’s pretty!” unless I’m shown direct comparisons. This is just a problem with me though; I can’t tell the difference between a 4k screen and a normal HD one tbh.
The new plains are prettier but I didn’t go wow until I noticed there was less shrubbery that was blocking my aim sights, no snarky sarcasm intended.
And oh man was I scared when my winter theme decor disappeared from my ship because I’ve had that active for 3 or 4 years now *I like the cold :D*. Real happy to see I can just reactivate it whenever I feel like it instead of waiting for December to come around.

I normally like to have side-by-side comparison shots from exact same places (my EQ2 Frostfell one is my crowning achievement there), but I found I really didn’t take enough screenshots from the plains before =(

You could go to Steam’s community screenshots and get some “before” screenshots and then using the minimap on those screenshots find the same places in-game to take “after” screenshots. However’s there’s day and night cycle and weather on Plains so you’d need to match those too…

The Lotus will no longer be as purple.

It’s amazing really, the constant steam of solid changes and addictions DE makes to this game that only now triple A studios are trying to mimic.

“you have the chance to tranquilize wildlife to aid in relocating and saving them.” Hell yeah, i love this, would love to find far more of this type of content in games, very nice addition.

The Stream Team: A smidgen of SWTOR story

Enter to win a TERA action figure and grab a Fists...