Talk about a landslide decision. This round of adventuring for CMA saw my husband and I take up the Slayer path in RuneScape, which also saw us try out a month’s worth of membership to open up the activity. This appears to have had the benefit of opening up other skill lines and activities, but we’ll get to that later. For now, let’s talk about the amusing grind that is being a Slayer in Gielinor.

I’ll touch on the grind part of that statement first: The path to being a full-blown Slayer in RuneScape seems to be one built on the sort of mindless, semi-passive gameplay that one zones out on or does while looking at other stuff like mining and crafting in Legends of Aria. Much like that activity, though, I don’t particularly find that a negative thing exactly, it just seems like a very long path. Slayer point gains seem to be extremely stingy and apparently don’t even get granted for doing tasks for the starter Slayer Masters.

I was glad that I had someone come along for the ride with me, but even co-op point gains felt like a slog. Getting a single point for completing a shared objective doesn’t exactly fill me with a burning passion to progress. That said, its benefit to growing in other skills like character level or combat level is pretty profound, and doing it with a partner is 100% the way to go. 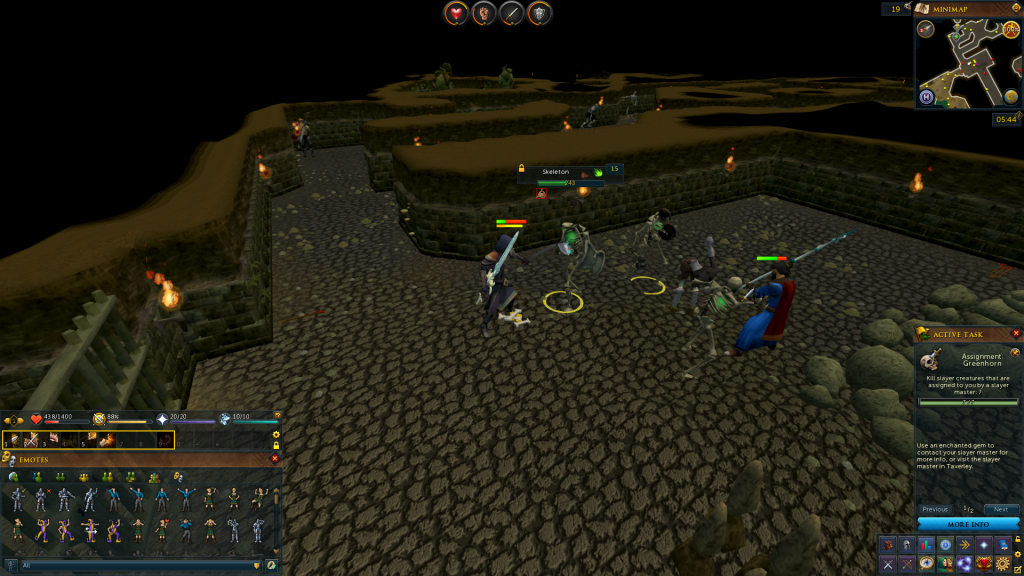 On the subject of doing Slayer activities with a partner, let’s get to the amusing part. Slayer quests, as I suspected, are pretty much kill x y, where x is a number and y is a creature type. As MMO quests go, this is bog standard stuff. The amusement, then, was mostly in the execution instead of the objective.

The first several Slayer quests we took were done by just us, working in tandem to get acclimated to the system. Lots of these opening quests involved killing spiders or trolls and the like. Then one of us were told to kill birds. Does that mean any bird, then? A quick bit of research found that, yes, any bird will do, so we valiantly went around town hacking away at chickens.

Another couple of kill quests and then we were given the objective to kill cows. Once more, we headed to a nearby animal pen to start hacking away at monsters, only this time I decided to watch from a distance as my husband fired arrows into the pen. And then the Super Cow arrived and what is this game.

Taking down Super Cow was actually extremely lucrative: It dropped some huge bones to bury for Prayer power, so much steak and hide, and 5,000 coins. Thank you, Super Cow. 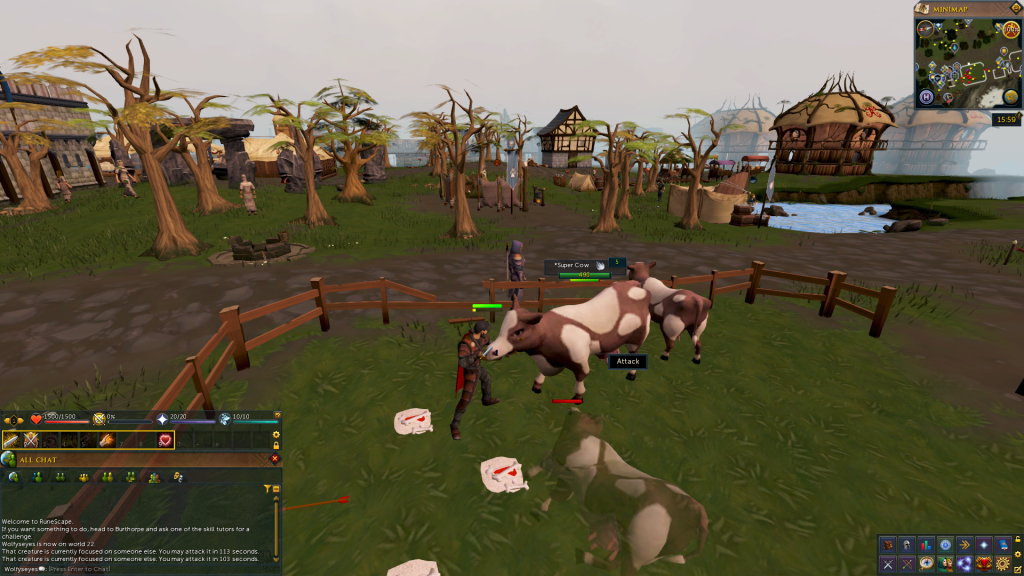 Emboldened by our overall success (we died only once), we decided to take the advice from last week’s comment section and activate co-op Slayer quests. One of our first activities together was to take down some Ice Fiends. After some Google searching on where these critters spawn, we ran in to a spot of trouble; these are level 35 monsters and we’re pretty low in power. Still, nothing ventured, nothing gained, right? We rushed in.

Our first fight was pretty close, with me taking point and tanking the creature while my husband stayed back and unleashed arrow after arrow into the Ice Fiend. After a protracted battle and a quick bite of some cooked meat mid-fight, we were victorious. One down… 17 to go? Oh boy.

We continued to toe the line, cooking our steak and eating it after every fight or otherwise resting to recover our health slightly faster without food. It was slow going, but we were making progress. Then, my husband made a discovery: right behind the area we were farming Ice Fiends was a cabbage patch. And we could just walk up and pluck them any old time we wanted. 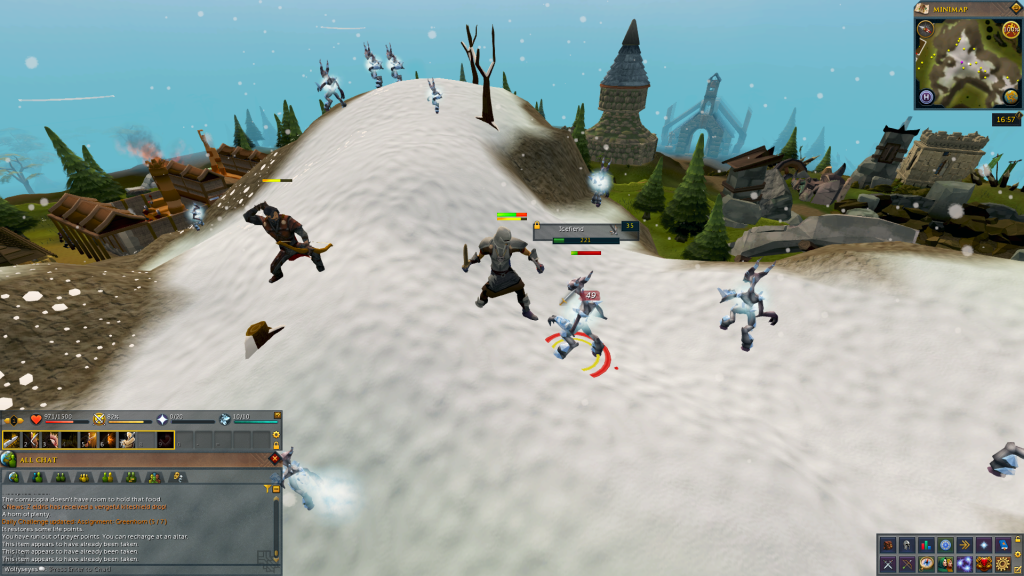 It was still a long crawl to the end, but now we were powered by leafy greens. We developed a system, taking down Ice Fiends, running back to the cabbage patch to stuff a dozen heads of cabbage in to our inventory, then running back to the mountain to slay more Ice Fiends. I envisioned my character hacking away at a powerful foe while he crammed a whole cabbage in to his face like some sort of murderous rabbit. Truly a heroic mental image. I even refined my cabbage delivery system when I realized I had a cornucopia item in my inventory, which let me stuff four heads of cabbage into it and then use that item to eat all of them at once for instantaneous full health.

Soon, victory was ours, and it’s all thanks to a random communal cabbage patch and the restorative crunch of fresh veggies. Which honestly seems like the only sort of story one can tell in a sandbox MMORPG.

Ultimately, the Slayer activity is definitely a fun cooperative gameplay hook, but I think it’s about time we move on to something else entirely. And, like I said, being Members has opened up a couple of possibilities for us. 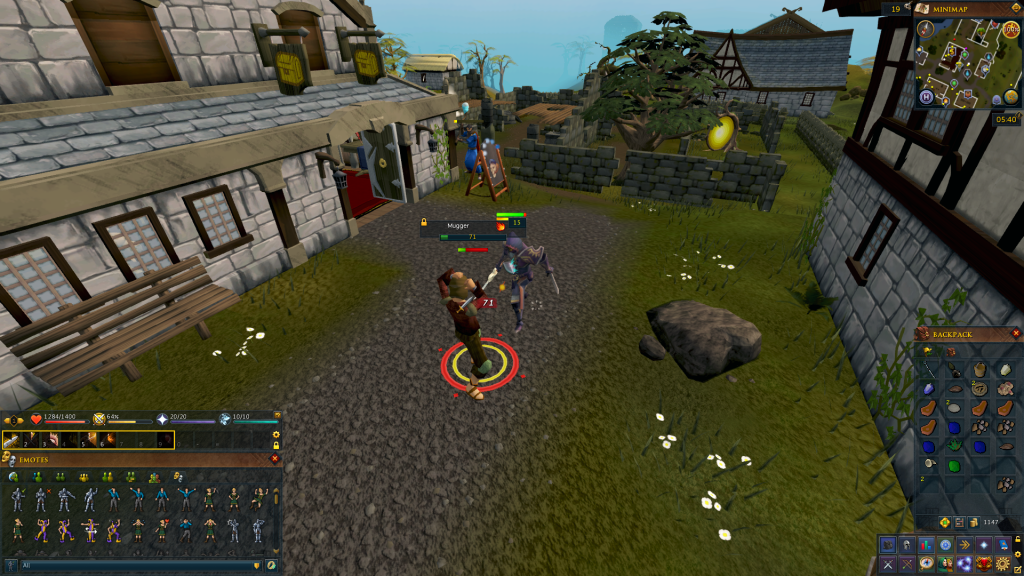 Personally speaking, I’m curious about a couple of different activities available to us. First off, there’s Minigames. Most of these might be out of our skill levels in the Combat or Skilling categories, but then there’s a Minigame called Cabbage Facepunch Bonanza and I feel like I need to experience this firsthand.

Second is Dungeoneering. This suggestion was passed by my husband, whose reaction was ‘Oh, OK,” which I think is British for “I’m not sure we should do this but I’m too polite to say as much.” It appears to have bad idea written all over it and I am a sucker for trying bad ideas if it makes for amusing gameplay and reading material.

Finally, of course, is the old time-honored activity of following regular quests. As Members we’ve got the lot now, and it seems like it’d be nice to find out more about the game’s world.

That, of course, is up to you readers. What next?

What's next in our ongoing RuneScape adventure? 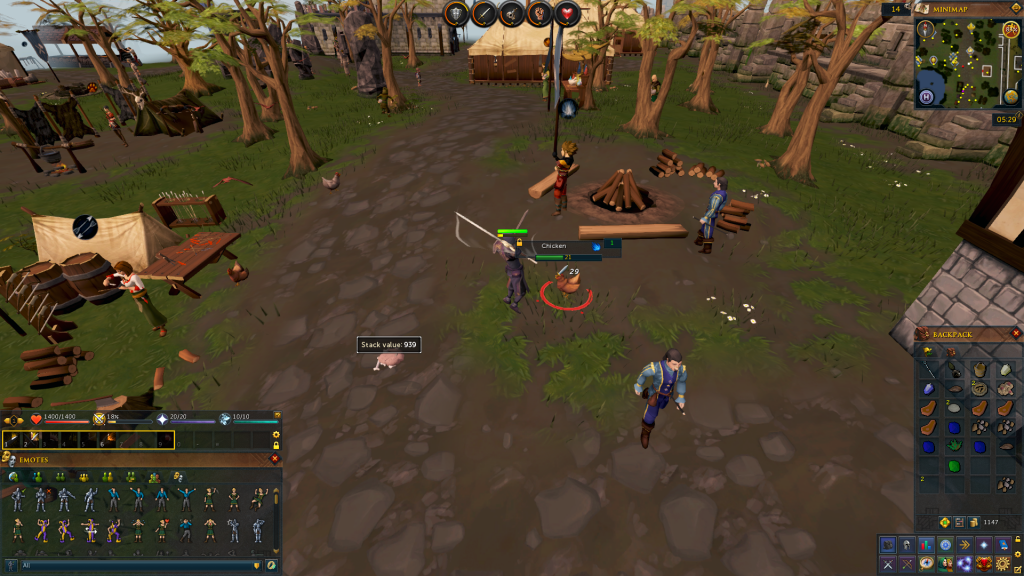 Polls will close at 1:00 p.m. EDT this coming Friday, April 19th. You all know the drill by now. Until then, I’m going to ram more cabbages into my gob. As the gods of Gielinor’s pantheon as my witness, we will never go hungry again.

As a player who just spent a year playing as a member after not playing for 11 years…(My time ends on the 25th)…I was not that impressed by dungeoneering skill.

It’s essentially a randomly spawning area that is shunted off from the rest of the game and has it’s own items. But the biggest problem with it, is that if you choose to solo, and for whatever reason…get bumped off…it throws you out because it’s instanced also. So if you’re at all a completionist…you can end up having spent over an hour in there and then have it all taken away by something that can sometimes be out of your control. (For example, a power outage/AFKing for too long, or even just the game crashing or something.)

I mean sure, it’s a nice concept in theory, and technically you don’t have to completionist the area…and can just do guardian doors only…and basically run through without even doing most of the place…but what’s the point in not playing a game you want to play? (Which seems to be a theme with Runescape now…which is why I chose to not pay for more game time…after literally counting how long one foraging node takes out on the Uncharted Isles of the Arc…and having it come back as a literal half an hour. Half an hour of standing there unable to do anything with your character. That’s not ‘fun’, nor should that type of gameplay be supported.)

Anyway, good luck with your exploration, there’s plenty of fun to be had on Runescape…I just personally am not enthralled with where they went with aspects of it…

Nice to hear you had a fun time there. I personally believe you could go on with questing a bit but technically the best would be doing a bit of everything which is usually the point in a sandbox as you got many activities to do