To celebrate the launch of Undermountain for Neverwinter on PC last week, PWE has kindly given Massively OP 100 cloak keys to give away to our readers! The Cloak of the Vine is an appearance item for the neck slot.

END_OF_DOCUMENT_TOKEN_TO_BE_REPLACED
The codes can be redeemed only once per account and expire at the end of 2020, and the items are bind-on-pickup. Critically, the keys are redeemable on PC only, so if you’re a console person, you can skip this one! Furthermore, the keys should work for all PC players except those located in Russia. Read on to enter to win! 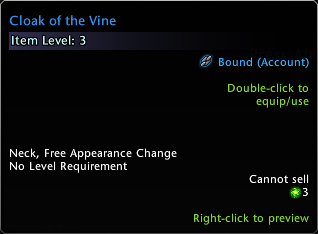 One hundred winners selected at random from the total of entries submitted to Rafflecopter will be contacted via email by Massively Overpowered to receive one code for a Cloak of the Vine key for Neverwinter on PC. Entrants are subject to our official contest and giveaway rules; cheaters will be disqualified. Entries will be accepted until the giveaway’s end on Tuesday, May 7th, at 12:00 a.m. EDT (midnight Monday night). We’ll draw the winners and send out keys and redemption instructions by Wednesday evening (EDT), so make sure you’ve submitted a working email address in Rafflecopter.

Have fun and good luck, everyone!

Heya folks! We batch-emailed keys to all 100 winners early this morning. Make sure you check your inboxes attached to Rafflecopter – and your spam boxes – as you had a VERY high chance of winning one. Congrats! :)

I hope they never add Planeshift or Spelljammer material to the game.

a bard would be nice

A new class would be good!

Spelljammer I think it was?

Thanks for the giveaway, MOP!

Undermountain is such a cool concept.

Unfortunately it comes with a rather BIG game/system change with mod16, that makes it very hard to ENJOY said concept.

I came back to neverwinter after having gotten a character to 60 (before the cap was even 70). Decided to roll a new character to experience it from start to finish again since so many things changed…

… which resulted in such an unenjoyable experience.

The journey from 1 to 30 for nearly every class, is just awful now. You die, often, and feel just very lacking and unfinished as a class. You have ZERO choice on ANYTHING. No more stat rolling, no more power selection, no big talent tree (they pulled a WoW!!). And sadly, the preselected design of each class from 1 to 30 is just horribly awful and unbalanced.

This is more than just people needing to relearn a new system. This is just HORRIBLE balancing and pretesting. As an example, At Will abilities are now even more worthless than before. Doing 300 damage per hit when the enemy has 5000 life. On the flip side, your encounter powers (ones on 10-20 second cooldowns), hit anywhere from 5k to 15k damage. Meaning if your cooldowns are up, you can go in and one shot pretty much anything… but if they arent up, you are popping potions, dodging, and blocking to try not to take too much damage until you can use these abilities again. There is such a huge discrepancy between At Wills and Encounter powers that its laughable right now. Even your Daily powers dont feel very useful because they are only a slightly more powerful version of your Encounter power.

I Finally settled on playing a paladin past 30 (after trying warlock, GWF and ranger and quiting after 20.). As a healer spec, I could use my encounter AoE to nukes an entire group of enemies in one hit (sorry warlocks). Now at level 50, I cant do content my own level without dying OFTEN. To get the feeling back of the last time I played, im doing content that is 10+ levels lower than me. WTF.

I feel they have seriously scarred this game now, and its not even close to being very fun. That sad thing, I still havent gotten to try the new content that seemed so cool… the undermountain.

I hope they never adapt Scourge of the Slave Lords! Don’t get me wrong, I’m all about beating up on some slavers, but at a point in the game where we’ve fought liches, dragons, and would-be gods…breaking up a slave trade ring seems more like a side quest.

The Daily Grind: Do you have a favorite MMO PvP moment?

Massively Uplifting: Speech therapy, a college class in WoW, and the...

The Repopulation promises new skills, system revamps, and more in its...