While the Valiance Online team continues to be quiet on its website, behind the scenes work is progressing on the superhero MMORPG. At the end of April, the team teased that “big news is coming,” some of which might be a handful of patches that have rolled out over the last few weeks.

These patches for the internal client include updating source avatars, improving performance, tossing in better outfit textures, advancing to the latest Unity release, cleaning up shaders, and adding animations for the new combat munitions powerset.

Meanwhile, the art team over at City of Titans is proud to show you that spandex is a privilege, not a right. In a five-and-a-half minute video, several spandex, tactical, and stealth costume pieces are shown for the upcoming title. Female character models are used, as the team feels that fans haven’t seen as many women avatars as of yet. Check it out after the break!

Also, check out some of this sweet concept art for the game that showcases a militaristic bent: 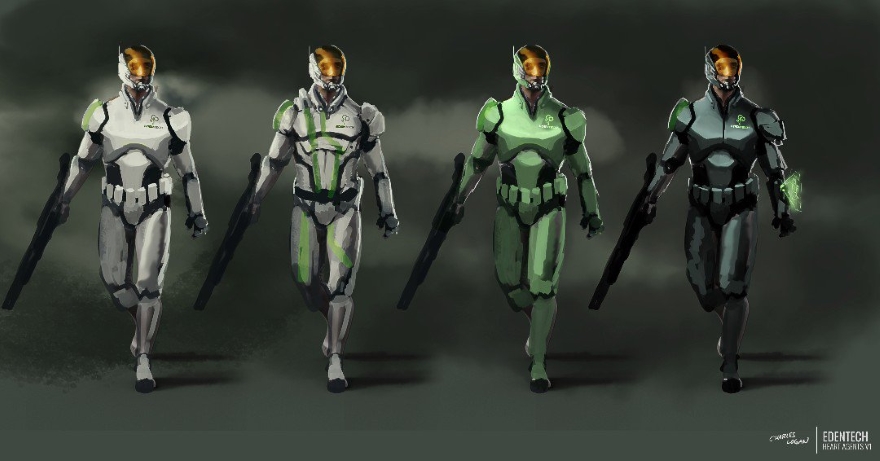 I’m patiently waiting to see what these CoH successor projects have to offer. I’m not looking for a “upgrade” to CoH but more of a “where do you take the story/genre next?” type of feel. But being that none of these are being backed by a major studio it could still take years to possibly see the actual light of day and/or stay afloat upon launch. But, when they do launch, I’ll be there ready to support.

I am waiting to see what Valiance brings to the table personally. It looks visually pleasing, and if it keeps the flow and style of COH I will happily support it.

I’m still interested in all 3 of these successor projects despite having CoX back. The cities all look great when we see buildings and streets, but the last animations they showed were not very good at all. Still wish them all the best of luck and will likely try at least CoT since I backed that one years ago.

This has to be a joke – after years City of Titans still has nothing substential to show. What a waste of kickstarter money.

What sort of abominations are those!

I am looking forward to CoT.

With the private CoH servers now available all of these successors really need to step up their game. If they can’t demonstrate they’re better than CoH their target market isn’t likely to leave the title they know and love now that they have access to it for free.

I would, better graphics, hope of updates, and far less likely to get a C&D letter shutting them down.

Agreed. So far barring better graphics I’d rather stay in CoX even with the risks, they haven’t shown anything particularly impressive on any of the 3 projects yet.

nearly ALL of these successor games have poor model design, horrible animations, and entry level texture work. It screams amateur. (which it is). All those games on steam that keep getting slammed for being cheap asset flips… these games arent going to feel much different.

However, the only thing making it look more modern than CoX, is the newer engines. CoX has all around better animations, combat, movement, pretty much everything, just on a much older engine.

For me, that says “stay away from these games” when a game from 2004 still looks and feels better than games that are being developed in 2019. I get the passion behind these products, but in this day and age, they just dont even come close to the standards of what most people expect from games.

I will say this.. out of all 3 of them, Ship of Heroes seems to have the more talented animators and model designers… Their texture artists, however, dont seem to have the tools or skills to make textures that dont look computer replicated from 2002 (which is funny, because AI today can make older textures look even better now)

A lot of this is exactly what I was talking about here and in other articles. I’d say the worlds look good but the models and animation are terrible. That last SoH combat animation was not impressive at all.

I’ve posted that elsewhere too, the models look and pose like bad Unity Steam game asset flips and I’d rather play an older looking game that has solid combat flow and animations than a more modern game that feels stilted.

I prefer CoX to CO and DCUO, but from I’ve seen those games are both better than these so far, and CO has terrible animations and looks cartoony rather than comic booky as it is. DCUO is the best looking one over all and looks very much like a comic book come to life, but CoX is the best game-wise of them all so far.

And I really want them to make a better product if they can. I don’t like sounding super negative about these projects and they aren’t made by big studios but they really need to bring us some good stuff and it just never seems like its that great, at least not yet. I truly want to see something new and exciting to play that builds on the past and improves upon it.

As a non CoH player but super hero fan I am far more interested in the successors than I am with rogue player run servers.

CoH players will be a big part of their audience but not the only part :)