Are you melee, magic, or archery? You’ll have to choose when you step into Camelot Unchained’s world, because these three paths will lead you toward incredible choices and builds. In last week’s dev update, a good deal of focus was given to the ability builder, which is a major part of the character progression system in the game.

There are many pots bubbling on Camelot’s stove, among which are the spell lists for the Mage, movable siege engines, an improved post office, tools for backers to organize their guilds, and the not-at-all-gross “Corpse Chucker” catapults.

Every class will be using Camelot’s new ability builder to make key choices that will have a massive impact on the battlefield. Here’s a preview of the ability screen: 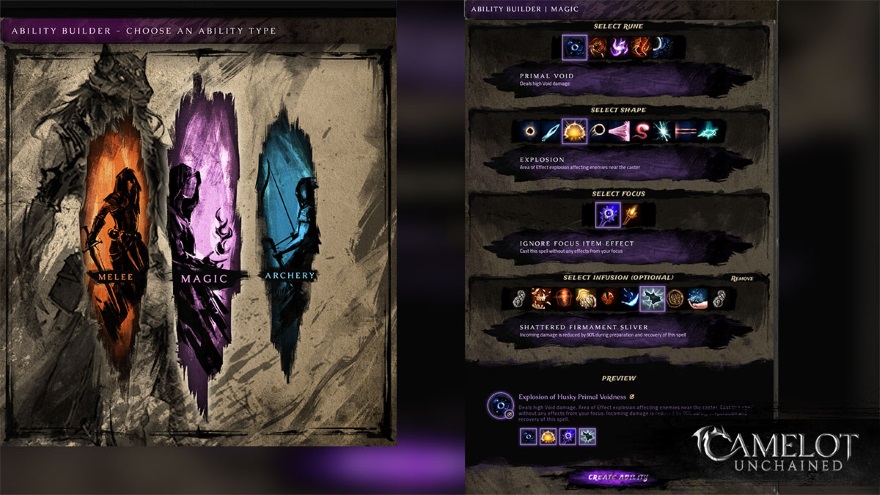 For even more Camelot goodness, check out the developer discussion video below in which the team members jaw about the ability builder and the Mage class.

System sounds interesting but im worried about balancing. You already have 3 sides with different classes for each. Now add in a power mutator fore each class and how the hell can all the permutations ever be balanced? Something will always be overpowered in that scenario. Its hard enough to balance things with fixed powers never mind this. Especially in a pvp based game.

I really like the sound of this. As someone who is accustomed to the world of tabletop RPGs, I like a lot of choices and versatility, even if you can indeed make terrible builds if you’re not careful. Still keeping an eye on this one.

Man oh man, I don’t really game these days, but I am still looking forward to this

Ability builder sounds pretty cool, one day it actually may be put in players hands, but this is not yet that day.

I know I have been critical before about CU ascetic, or rather it’s lack there of. But that is one stylish UI screen. Well done.

This is probably answered somewhere, but when I hear the ability maker is tied to progression I get worried. Basically, am I free to mix up abilities at any time, or at some point do I get locked into my choices? I’d hope not the latter because I would definitely be the person who makes a build so terrible it would require re-rolling.

The eternal dev conundrum: do we streamline for accessibility, or allow greater flex and with it the possibility of players borking their builds? Not an easy question, but IMO the trend in recent years has gone too far toward the former.