Who would have thought that two planets would bring change? I was wholly expecting some generally insular stories from Nar Shaddaa and Balmorra as I continued my guided adventure in Star Wars: The Old Republic, and that’s about what I got for the most part. However, once I got done with my duties on those two planets, things got a bit more serious.

END_OF_DOCUMENT_TOKEN_TO_BE_REPLACED
I know that this game has been out for a while and so posting a spoiler warning might seem superfluous at best. That said, I also have managed to not have the storyline for The Secret World spoiled for my by the grace of an extremely good playerbase. So, in honor of that playerbase and in the interest of fostering continued goodwill with the SWTOR-playing public, please know that this post will contain spoilers for the Imperial Agent mission. With that out of the way, let’s begin.

Per your votes, my story started on Nar Shaddaa. The mission: Upend a terror cell of a dissident group led by a man called the Eagle. My contact was a Watcher X, an apparently “retired” operative from Imperial Intelligence. I put retired in quotes because he apparently has lost his marbles enough to be put into a sort of lockup on the planet, yet wasn’t dangerous enough to be outright executed. Which is weird, but hey, Star Wars, am I right? 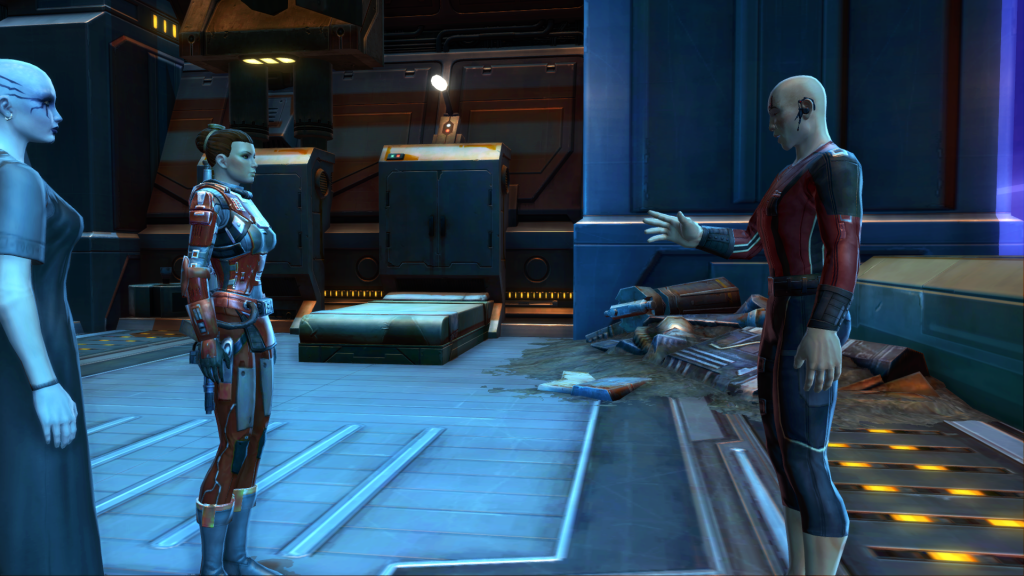 From the off, everything about Watcher X was kind of boring. He sounded a bit like the lead singer of Right Said Fred reading a script penned by someone who had a vague idea of paranoia. Still, I had a job to do and I meant to get it finished, especially if it ultimately meant that it lead me to more interesting questing. So far, so typical.

I did take a break from the Agent storyline to pick up the planetary missions, however. I remember doing this before and enjoyed revisiting this arc immensely, mostly because you have the option to punch a Hutt. Which should be taken as good advice, to be honest. Always punch the Hutt.

With that and a Heroic mission done and a couple of levels earned in the process, I came back around to the chores that Watcher X had laid out for me, which ultimately led me to the disruption of network grid and the killing of the cell’s major leaders, effectively dissolving the cell. This also, however, gave Watcher X the opportunity to escape from his holding area, which kind of ticked me off… until he offered to provide me with secrets about the Agency and about my companion Kaliyo. Seeing her get mad at the idea of him getting away was all of the motivation I needed. Which leads me to another piece of good advice; always piss off Kaliyo. 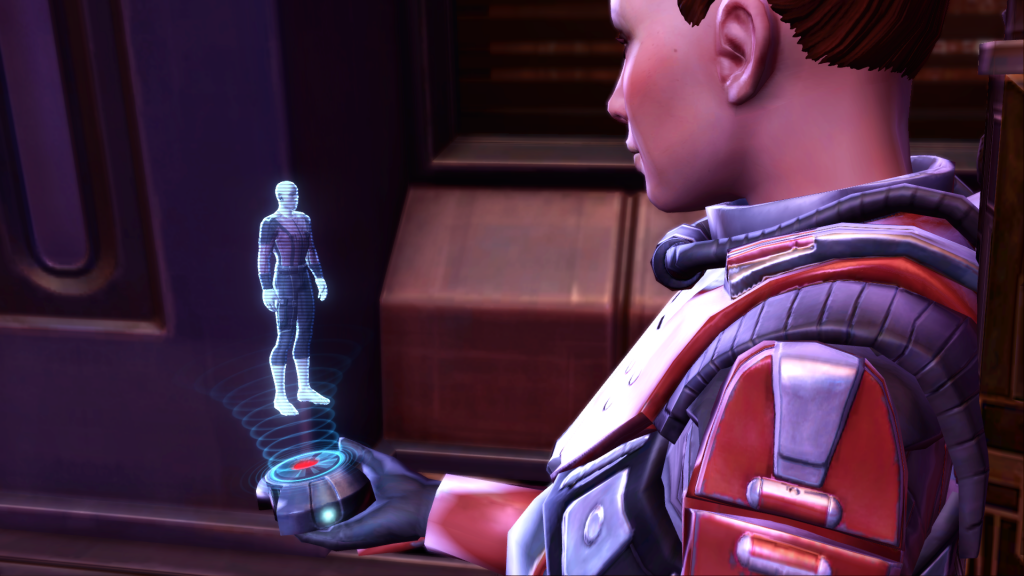 Intrigued by the potential implications of my actions, I wrapped up my business on Nar Shaddaa and made my way to Balmorra. This is one of those planets that I always kind of hate going through, so the fact that Nar Shaddaa was the first option ended up being a boon since it made me overleveled for the zone. Which meant I could ignore the planetary missions, thank goodness.

This time around, it was time to meet a mole within the Balmorran terrorist cell. This was some overall straightforward stuff, with my character attempting to infiltrate this cell as a wannabe recruit to ultimately get close to the cell’s leader and take him down. It had the standard story beats including a person who didn’t trust me and a mole who was a bit too kind-hearted for the job. That said, I did take a few of the Light Side choices. Not many, though. I couldn’t risk blowing my cover.

Once again, things were pretty routine here, but the story also seemed to resolve itself in astonishingly short order, as if it were also tired of its own company. Which is fine, really. I was ready for it to get out of my house anyway, so to speak. 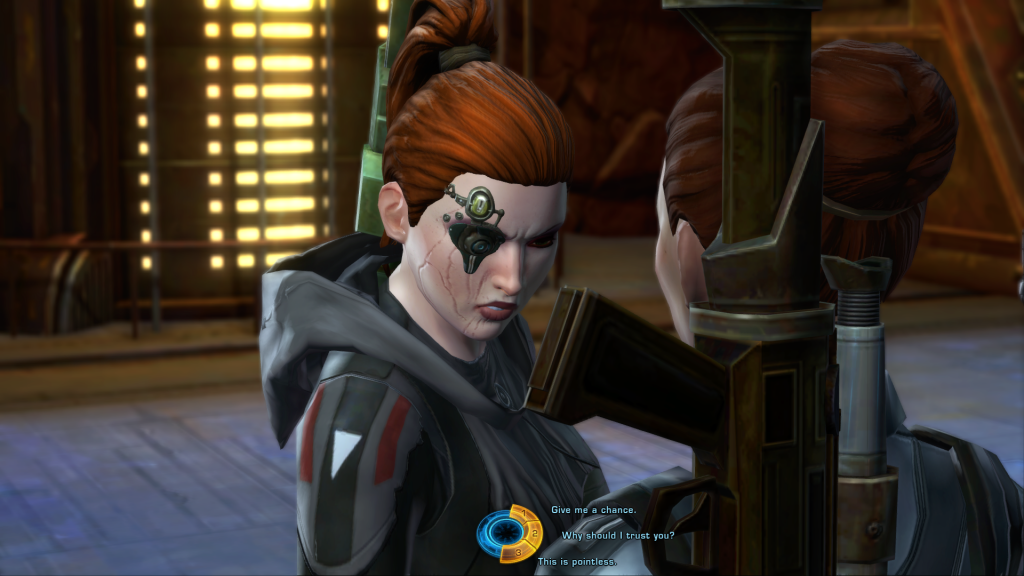 As I wrapped up and headed back to my ship, I was expecting just another call from Watcher Two to give me my next assignments. Instead, my transmission was intercepted and my ship put on lockdown. I was being accosted by Darth Zhorrid, the daughter of the Sith who was killed by the Eagle terrorists and the one who now succeeded him on the Dark Council. She’s also a big, heapin’ helpin’ of crazy spaghetti.

Turns out, she wasn’t pleased with my progress in finding her father’s killer. She also was pretty upset at the fact that the other members of the Council didn’t exactly respect her ascension, and so I had to track down an acquaintence of her father and bring him back to her for interrogation. It wasn’t immediately apparent what was going to happen here, but this colleague mentioned something about a contingency plan before he was taken down. Still, the deed was done and she would get her prize, so I returned to Dromund Kaas to see her.

And see her I did. She was torturing my commanding officer, admonishing him for his failure that led to her father’s death. This was a pretty brief scene, and its plot threads were left intentionally hanging until I no doubt finished my next two planetary missions, but it was also a scene that really ratcheted up the tension. She was suddenly not just a nutjob that could be dismissed with passive neglect. She was angry, and now she was very clearly watching and judging everything we were doing. 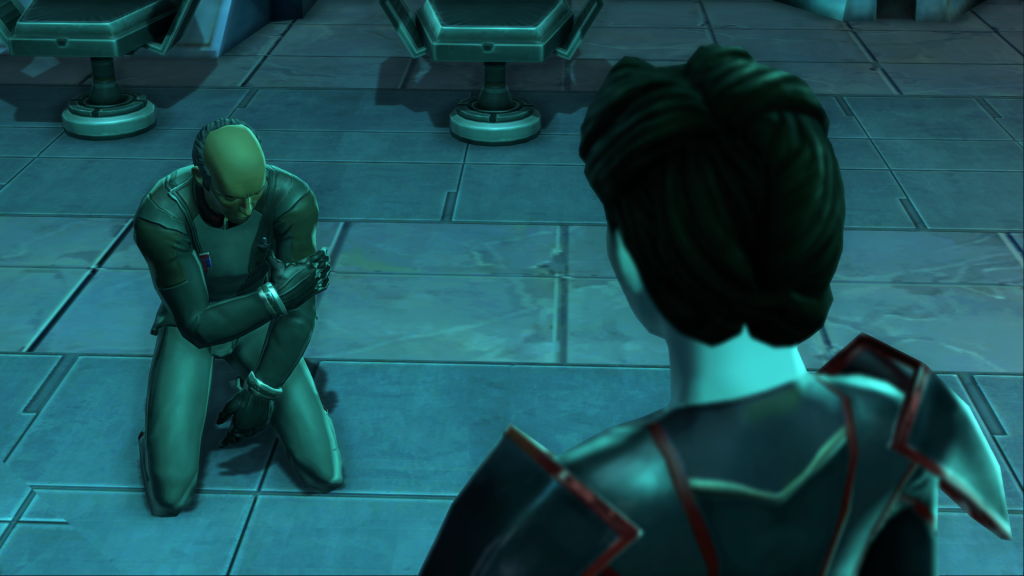 Before I pressed on with the story, I decided to follow through with the other poll choice: a Flashpoint. I accidentally ended up queueing for a Veteran Flashpoint — Athiss, to be precise — and it was pretty much a bad time. I was boosted up in level to be able to contribute, but the group dynamic was almost entirely non-existent, with the tanker simply just tearing through everything like he had to go to the restroom and the healer not really being fussed to heal. There was also a point where I was having trouble doing a leap on to a ledge in order to skip a whole bunch of mobs, which was no end of embarrassing.

I should mention that, obviously, one Flashpoint does not constitute the grouping experience of SWTOR entirely and I’d like to give this a try again. For now, that run definitely left a pretty bad taste in my mouth and only seemed to reaffirm that this game really doesn’t want to be played like an MMORPG. I’ll hopefully test that theory later, though, voting results willing; more on that in the polling below. 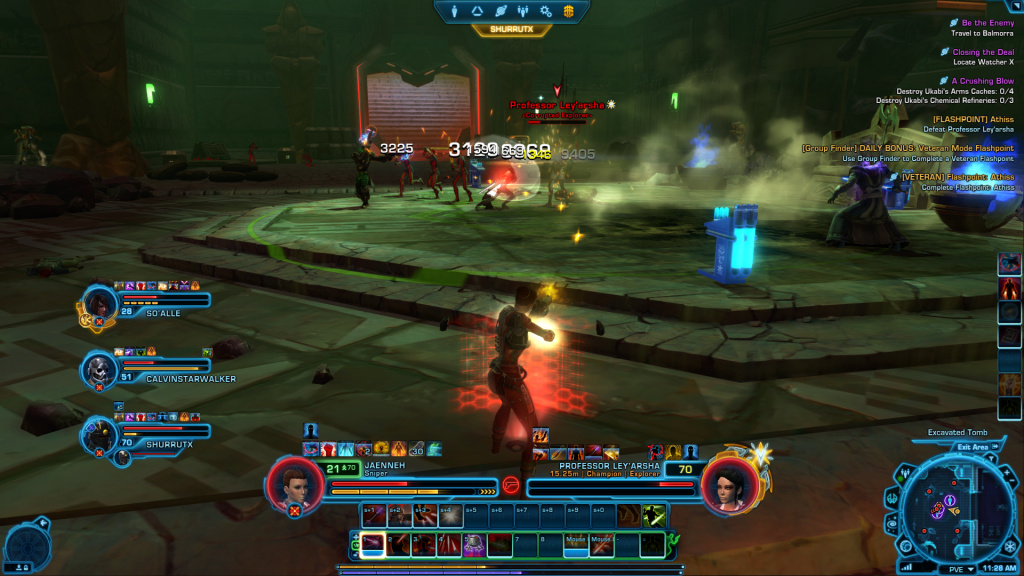 I’m unfortunately not going to complete the Agent storyline for this column — I wasn’t expecting to, frankly — but I absolutely want to press onward. That said, I’m also interested in whether I should take a quick peek at the current cap of the game and see what activities there are for me. So, here come the polls!

The first one is pretty much like my last: a question of which planet I should head to next. I’m currently sitting on level 26 right now, and so I don’t believe level disparity will be much of an issue once again. So, where to?

What should be my Agent's next destination?

Next is a question of focus. One way or the other, I’ll be continuing on with my Agent’s story, but I’d like to know if anyone reading is curious about what sort of things are at the tippy-top of the game, especially since I feel like I need some redemption after that Veteran Athiss run. I have a level 70 Marauder and my husband has at least a couple of high-level characters, so we’d take a moment to explore what awaits at SWTOR’s endgame. Assuming, of course, people care to learn about that.

Should I take a moment to explore SWTOR's end game?

Dear gods in all the heavens, do NOT skip the Agent story.
It is literally the best story in the game and everything that comes after vanilla SWTOR is trash by comparison.

Unless you are going to do endgame story stuff its just gonna be same old same old: dailies, grinding, raiding, instances/Flashpoints like every other MMO.

I thought you were doing swg emu’s?

Endgame is the same old same old as every other game, nothing that interesting, unless you’re a boss mechanic fan.

I would advise finding a guild or just doing the pug lotto until you win a decent group and then somehow force them to group with you all the time.

Your FP experience was pretty much the normal pug experience, the rest of the group was probably just trying to finish a weekly or getting conquest points, so they just wanted to end the thing as quickly as humanly possible.

A heroic? As in you only did one? If you’re not doing the planetary and exploration missions you should do all the heroics to stay up to level, also heroics give you gearboxes that allow you to always have up to date gear, just make sure you pick the right type of gear for your spec.

No other storyline in SWTOR has the tension of the Agent storyline. In most of the storylines you’re the hero and regardless of your choices you expect to win. The Agent storyline on the other hand feels like at any moment things will go sideways and the usual constants are not nearly so secure. In fact, things are going to get more dire and by the end of it, you will question if you have anything or anyone you can still trust in. Nowhere else in SWTOR does it feel like you are one bad choice away from ruin.

For sure, Agent is an amazing watch, it’s riveting actually, like i said, great watch.

Path of Exile’s take on Farmville blooms on June 19 with...