Oh hey there Superdata, is it time for another run-down of who’s screwing up in the games industry this month and who’s making money hand over fist? Why yes, yes it is.

On the PC side, bad news for World of Warcraft, as it’s slipped from the top 10, again, though as we’ve been covering, Superdata had previously split WoW into East and West entries, which doesn’t seem to have been done for most other games, so it’s not clear why that happened or whether a recombinated WoW would place. But there it is anyway.

Hearthstone “West,” however, did regain its spot on the top 10, well ahead of the release of its most recent expansion, so there’s that. And League of Legends has once again reclaimed the top spot over Dungeon Fighter Online. DOTA 2 and Apex Legends have disappeared as well, replaced by Sekiro and The Division 2.

One the console side, Division 2 has fallen from the top spot to the bottom, while Fortnite has inched up a spot.

“Apex Legends generated $24 million in April, down significantly for the second month in a row,” the analysis firm says. “Monthly revenue now sits at just over one-quarter of the launch-month sales from February.” And as for Blizzard?

“Overwatch and Hearthstone still face declines despite new content updates. Both titles saw a sequential bump in total digital revenue following new content releases, but still declined 15% and 37% year-over-year, respectively. On a combined basis, Overwatch and Hearthstone digital revenue across all platforms is down 39% year-to-date compared to the same time period in 2018.” 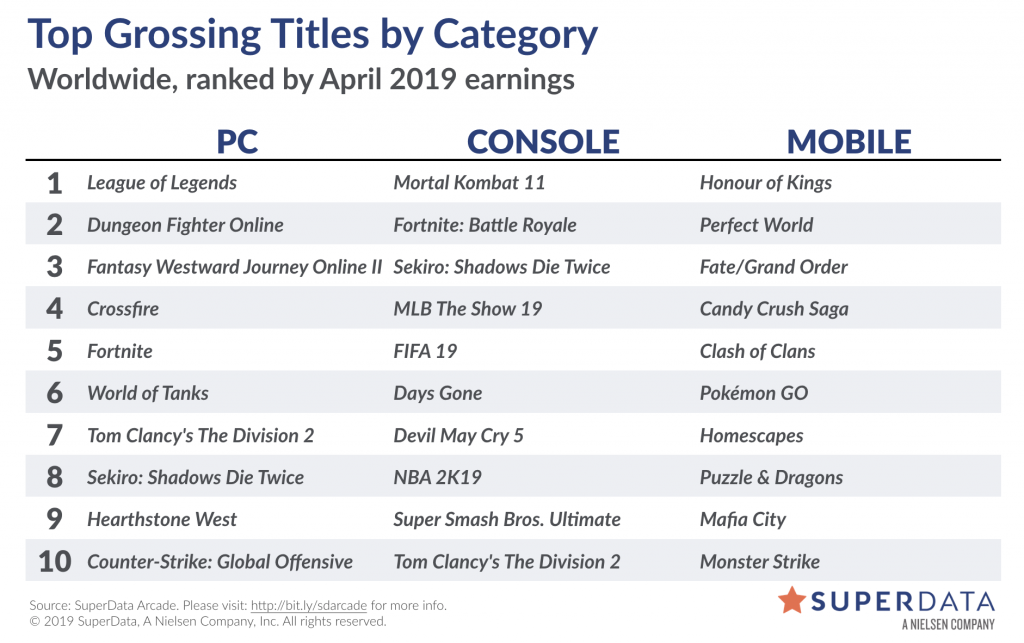 I dont know, but with all this west and east splitting I dont even know how valid Superdata’s data is. Because it may be something very different if counted as one

This basically means that, for April at least, Heartstone is financially more important for Blizzard than WoW. Depending on how revenue is counted across multiple platforms it might even be the best performing Blizzard game for that period.