Unlike with the melee DPS, magical ranged damage actually had one of its members that changed a whole lot. Hooray! But the other two members of this particular sub-role basically didn’t budge even half an inch. Seriously, Black Mage and Red Mage will feel very familiar when you start playing them in Shadowbringers, so veterans of Final Fantasy XIV will mostly be looking forward to having a couple of new tricks that extend without altering your rotation.

END_OF_DOCUMENT_TOKEN_TO_BE_REPLACED
Is that a bad thing, though? I mean, Black Mages and Red Mages both seemed pretty happy with their lot in this past expansion, I know I was happy playing both of them. And the changes that did arrive are actually useful and address real scenarios, so I’m even more happy to see them baked into the game at a fundamental level. So let’s start with Stormblood’s poster mage just to explain how Red Mage is the same dang job while also even better.

As someone who has played Red Mage extensively, going into Shadowbringers my wishlist was pretty simple. I wanted some way to add Black Mana or White Mana to my gauge in an AoE environment and I wanted some smaller hit for single-target fights if I needed to just lose some mana instead of starting in on my big combo. If pressed, I might have shrugged and asked for a version of Displacement without a backstep for times when that might be dangerous. That would be about it.

Guess what? Red Mage gets a black magic and white magic pair of AoEs, a smaller single hit, and a direct melee tap that drains a little bit of Black Mana and White Mana when empowered. It also gets an ability that shares a cooldown with Displacement but is just a direct melee hit. Oh, and there’s now a follow-up cast to Verflare/Verholy, which are now automatically bound to the appropriate button instead of assigned to your hotbar. Also, Impact is now an upgrade to Scatter. And… that’s it, basically.

Seriously, that extra cast feels like it was added only when someone noticed that Red Mage basically gets nothing else that actually alters its playstyle, which might be cause for consternation if Red Mage didn’t already work great. The changes are solid and worthwhile while also being very mild, a perfect balance of not fixing what isn’t broken and giving you some extra flash along the way.

It’s actually pretty great. Red Mage is no stronger, but its niggling quality of life issues are now addressed, and so it feels a lot stronger. Thus, there wasn’t much more to say about it. It’s good now, it was good before.

If you hadn’t noticed, one of the big themes for this expansion seems to be turning skills that were previously big hits for single targets or multiple targets into spells with two different versions. Black Mage gets both a single-target version of Flare and a single-target version of Foul. You can also stack Polyglot twice. And… well, that’s pretty much all you need, isn’t it?

Again, that’s not being flippant. You get your cool fun stuff for the expansion, but when you look at Black Mage you can draw a pretty even line without major changes. You haven’t really lost anything, either; maintaining your stacks of Fire and Ice are easier than before, which is a net benefit. It’s just that it’s not, well… interesting compared to some of the bigger changes. It’s a straight potency upgrade and rotation expansion.

So keep on keepin’ on, Black Mages. You’re still the same sort of job you’ve always been.

It’s hard to say whether Summoner has changed more or less than Monk has. Both of them have seen some notable changes, but Summoner starts from a place of creating a more firm dividing line between this job and Scholar, and that is compounded by the fact that Aetherflow has been reworked so that you no longer have that straight cooldown. Indeed, spending those charges is no longer nearly as much of an element of the job.

For starters, your three egi each have a distinct role. Garuda-Egi is for AoE damage, Ifrit-Egi is for single-target damage, and Titan-Egi is for soaking up damage yourself and making yourself more durable. (So it’s still not useful in parties, but now it’s the kind of not useful where you aren’t helping the group as much, not where you’re annoying the tank.) You also can now Dreadwyrm Trance whenever you want; no longer are you stuck building up charges, then burning them to enter the big trance. Instead, it’s a damage cooldown that still leads into your next phase with summoning Demi-Bahamut.

It’s after you summon Demi-Bahamut that things really change; that changes out Dreadwyrm Trance for Firebird Trance, which summons Phoenix as your pet and changes your abilities accordingly. Phoenix is both a party-wide buff and a source of damage, so you wind up pouring out the damage while it’s up. Then you cycle back to the beginning. It’s a fun cycle, but it also has less of the arbitrary buildup before you get to the cool part. 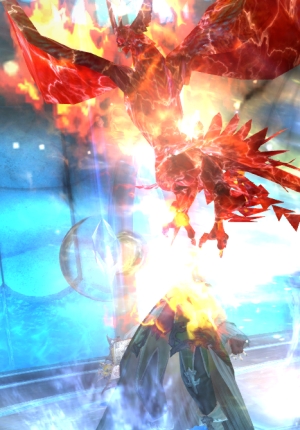 What about Aetherflow, though? You can now stack only two charges, which are gained by using Energy Drain. So those charges are still useful for things like Fester, but they’re no longer as vital. You also now have a straight AoE instead of fussing about with Tri-Bind, fortunately.

Summoner has long had an odd contrast in how it works; it’s at once a damage-over-time job and a summoning job, with neither one fully ascending to prominence. This version still has spells like Bio and Miasma as your central features, but it also doubles down on the ideas explored with both Dreadwyrm Trance and Demi-Bahamut, the idea that the Summoner is both a conduit and an agent for these powerful beings being torn into the world again.

I can’t say for certain that Summoners won’t have some adjustments to get used to; forcing everyone to have more agency over pets is going to be a hard sell for every individual player. However, it does feel like it’s still threading the needle to ensure that the job feels like a mage who summons. The summoning aspect is at the core, but you have things to do other than just summon. And the addition of things like the Phoenix buff will likely make lots of players draw comparisons to playing one in Final Fantasy XI.

Now, when do we get more egi glamours?

Final Fantasy XIV Shadowbringers tour: An interview with Naoki Yoshida
All of the content experienced during this event is part of a development build and subject to change before release. All of the travel and lodging expenses incurred during this event were provided by Square-Enix for the purposes of coverage. All of the Viera I have made in the benchmark will probably be largely underused.
Advertisement