The two new jobs debuting in Final Fantasy XIV: Shadowbringers had a lot to live up to. For one thing, both of them were widely anticipated ahead of time, since one of them sports a gunblade (which is perhaps the most quintessentially distinct weapon in the overall franchise) and the other one is the much-demanded Dancer. For another, they both had to feel true to their concepts and actually feel distinct from their contemporaries while actually bringing something new to the table.

END_OF_DOCUMENT_TOKEN_TO_BE_REPLACED
The results are jobs that are not as easily and immediately understood as Samurai and Red Mage were in the previous media tour… but they’re still good jobs, and I can see how they’re carving niches for themselves. (And I clearly kept up my tradition of picking a new job to experience my first expansion dungeon, so obviously they weren’t that arcane or anything.) So let’s start by talking about the alphabetically first job revealed second, Dancer!

Dance the night away 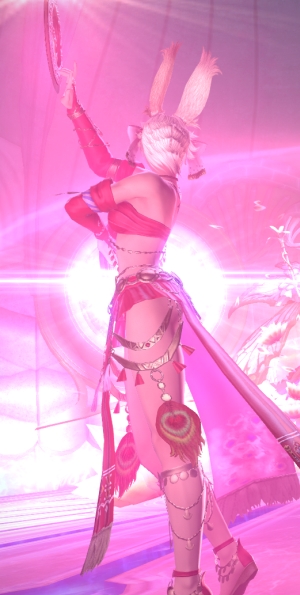 There’s basically one thing that players are expecting from Dancer, and that’s dancing. Traditionally, Dancers have worked in single-player titles by just dancing and producing effects based on those dance, often separate from any player input. This works fine in single-player titles but is less useful when you’re playing a job in an MMO, and thus it was always a question of how Dancer would handle the dancing.

The answer, it turns out, is by playing Simon.

Dancers have a two-weaponskill combo with two additional skills that can trigger off of those skills randomly, so you cycle one-two and might get to use one or both of the extra attacks in that line. Those strikes don’t combo, but the four skills together form the basis of your dancing; once you start your dance, they turn into four separate steps, and you have to execute them in the correct sequence to get maximum damage and benefit out of the dance.

So what’s the correct sequence? It’s randomized. The step gauge displays it (and the skills are highlighted on your bar), but each standard dance requires two and each technical dance requires four. Once you have successfully closed out the dance, you buff the party, deal damage roughly equal to what you would have done during the time spent dancing, and go back to attacking as before. It also allows you to fill up your Espirit gauge, which can unleash a big attack at the end of it.

That’s the fundamentals of the job, with a few added wrinkles like the addition of Fan Dances (special attacks that randomly proc in both single-target and AoE varieties) and the ability to designate a dance partner a la Dragoon’s tether. There’s also the fact that Dancer actually features a charge, which seems to play into the fact that the job’s AoE rotation is point-blank rather than ranged, so you’ll want to move in and out of range as time goes by.

At a glance, it’s easy for Dancer to look really complicated because it has a lot going on with two separate gauges, plus its steps, plus a whole lot of randomized procs. (Arguably it has more of those than even Bard does.) Most of the people I saw playing it seemed a little baffled. But I think that’s what makes Dancer alluring. When you start getting the feel for your dance steps down, it feels satisfying and complex without being overly ornate. The complexity is less than you might think at a glance.

But is it fun? I think so, yeah. I liked putting together dance steps and watching things unfold, and I think the job makes a fine contrast to its fellow ranged damage dealers. It might take players a little while to fully acquiesce to the real and perceived complexity of its toolkit, but it looks so stylish and feels at once so approachable to play while hinting at greater depths that players will be drawn in.

Let’s start by getting something very important out of the way: Gunbreaker has an ability called “Danger Zone.” That means that it is appropriate to start singing that song mid-dungeon until you get kicked, and that alone makes it the best tank ever.

Of course, Gunbreaker is also a job that exists in its own unique space. Its gauge is basically borrowing the Machinist ammo setup for specific attacks, but it only has two shots and three abilities that use the gauge. (This is not unusual; Paladin and Dark Knight also have three abilities using their gauge, Warrior has slightly more.) Unlike other tanks it doesn’t have a single combo with two endings, but it has one normal combo and one longer combo. And it also appears to be the anti-physical tank in the same way that Dark Knight is the anti-magic tank.

Let’s go for the basic rundown. The core rotation is similar to other tanks. The job has a two-ability AoE rotation and a three-hit single-target combo. Interestingly, the second hit of that combo applies a heal and a barrier to the Gunbreaker, making the job that much more durable; it can also pass that barrier to anyone it buffs with its defensive cooldown, which gives it a chance for little shields when serving as off-tank. It also sports both an AoE and single-target DoT abilities and a regen buff, so it’s pretty darn durable.

So what about that ammo? Specifically, they’re called powder charges, and they can be used to power three different abilities. The first two are straight-up damage strikes with some meaty force, one for single targets and one for AoE. I found that the best option was to use the first strike of my AoE combo, then use the charge ability, then use the second strike; it doesn’t break the combo and it meant that the spent charge was refilled. 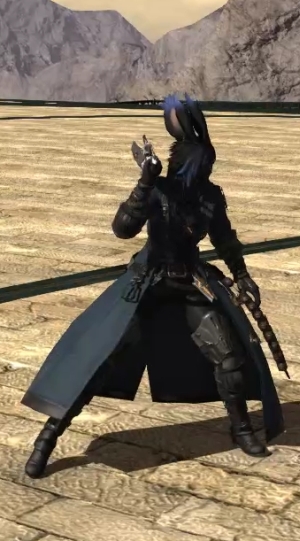 The other big thing is a specialized three-strike combo you can only start with a powder charge, a combo that can only be used in the correct sequence. You can’t even use the second strike without the first, which makes it easy to macro them together. However, you also have another ability, Continuation, which allows you to hit an off-GCD attack between strikes. So it winds up being a quick six-hit combo that you use on single targets, and it has some of the feel of Dark Knight’s traditional peppering of Dark Arts in the middle.

It felt like, at least in this build, there were still some bits not quite finished with Gunbreaker. Not in the sense that it’s non-functional, but there’s one ability level that seems to be missing an ability and I wouldn’t be surprised to see a little more refinement on things before the job goes live. The blasting combo in specific seems to be oddly devoid of extra effects beyond hitting for a bunch.

But then, maybe that’s the whole point. Where Warrior builds up and unleashes a furious set of pounding strikes, Gunbreaker cuts through. And the job is fun to play, durable and reliable without the hard-edged survivability of Paladin or the knife-edge balance of Dark Knight.

In fact, what kept striking me while playing it is that more than any of the other jobs, Gunbreaker feels like another flavor of DPS in tank clothing, much like Warrior always has. I don’t mean that in terms of numbers, but in terms of focus. And frankly, being able to do that while still making it feel distinct from Warrior is more than a good thing.

Final Fantasy XIV Shadowbringers tour: An interview with Naoki Yoshida
Travel and accommodations for this event were provided by Square-Enix, as is usually the case because fitting a sudden trip across the country to California is not realistically in my budget. All of the mechanics previewed are part of a development build and subject to change, and in most of these cases I think are almost certainly going to change in some ways through the process. This doesn’t mean Dancer will become a melee job; it just means that, you know, things change. Welcome to here.

I’m even more hyped for Gunbreaker now. I can’t wait to start tanking again. I’ve enjoyed PLD and DRK in the past, but Gunbreaker sounds more my speed and it will also fit my character better from an RP standpoint.

Dancer worries me a bit for progression and learning fights. It sounds like Ninja mudras but randomized with a bit of Bard procs thrown in as well (already the highest attacks per minute class with ogcd procs) – watching for the next random step while also watching for procs on top of doing mechanics….I see a lot of dead dancers.

If you’re going to have trouble watching four steps while dodging it’s definitely a possibility, but I have to be honest and say that it doesn’t worry me too much, especially with its dash option.

As a long time Bard, you end up figuring out the ideal placement for your hotbars and gauge to watch for procs (and where possible, rely on sound queues)…

At least those that live through the encounter do, heh.

Honestly I see a lot under the breath cursing and a lot of smaller group buffs going out from messing up the steps while moving, at least at first.