Huh. This is a really weird contrast in this batch. Obviously, there are only two ranged DPS to cover, but in Stormblood that didn’t matter so much because both of them underwent enormous changes for the expansion. Final Fantasy XIV’s ranged DPS went from casters-with-ranged-weapons to being… well, Bard and Whatever The Hell Machinist Was Supposed To Be, which I was excited about at the time but now refer to as such. Like, I can’t tell you what Machinist was meant to be, other than “fun,” which it wasn’t.

END_OF_DOCUMENT_TOKEN_TO_BE_REPLACED
The good news is that Bard has not been massively changed in the expansion; it has been changed, but not to a degree that it’s unrecognizable, and much like most of the casters Bards will still be playing largely the same job. The better news is that Machinist has now gotten its third design in as many expansions, but this one feels like it finally has shed the albatross that is Gauss Barrel fully and found its place. Here’s hoping this one works. 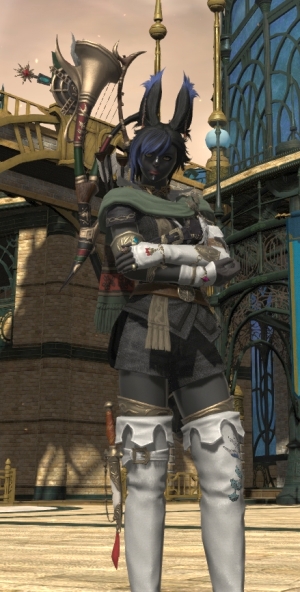 The biggest difference that I noticed in the way that Bard works was simply that Straight Shot is no longer your “hit this for a buff” weaponskill. By and large those seem to have been removed or altered, and Straight Shot is no exception; it’s now simply a proc from your first skill, and Refulgent Arrow is thus a straight upgrade to it rather than an alternative use of the same proc. Beyond that, though, its mechanics have remained largely unchanged.

This is not to say that they are wholly unchanged, mind you. The addition of the Soul Voice gauge is nice, especially for Army’s Paeon; while it was possible to hit a hard cap on the utility of that particular song’s procs, the Soul Voice gauge helps them be more useful. In essence, it fills up with one tick every time you get a song tick, and once you pass a threshold you can unleash a huge column of damage that works as both an AoE skill or a single-target spell depending on situation. It’s not a major new mechanic, but it does reward you for doing what you already wanted to do.

Bards also gain a nice new passive effect on Quick Nock, allowing them to passively recover Rain of Arrows casts a la Mage’s Ballad, thus avoiding the consistent issue of Bards having to manually stack DoTs on every enemy during big pulls. You also get an AoE Sidewinder equivalent.

I’m not entirely sure if the characterization put forth of the job having changed notably really fits with the job that I played, if I’m being honest. Yes, the job has definitely evolved somewhat and there are some new interplays that are going to be highly relevant when you get back into the swing of it. At the same time, it’s still recognizably Bard. It’s not like, well… the one that really got highlighted.

All of the chatter about Machinist as being functionally an entirely different job is wholly accurate. And I think one of the core explanations of how it has shifted can be seen by just looking at Wildfire. Yes, Wildfire is still there, but it has to changes: it can now be manually detonated, and its potency increases by a flat 150 for each weaponskill you land during its active window.

That’s it. Yes, it still means a burst of damage, and you still want to ideally hit it during a solid window, but it no longer requires or even cares about saving all of your cooldowns for this one moment. The range of damage it can deal is pretty small, and if you time it a bit off you can detonate it to still get something out of it.

On the overall gauge, Machinist has moved over to being a much more “selfish” ranged physical DPS; while it still has the same utility as other ranged DPS (a party-wide damage cut and interrupt ability, for example), it no longer has the vulnerability-up debuff it once sported. Considering ranged DPS can now comfortably sit on a spectrum of “support” to “selfish,” this doesn’t strike me as a particular issue, especially when everyone will want a Machinist around anyway because summoning your robot.

Yes, the robot. It’s the Automaton Queen, and you can summon her when your Battery Gauge reaches 50. That’s one of the two gauges Machinists use, with the other being Heat. Getting higher Heat leads to activating Hypercharge, a damage buff that also unlocks Auto Crossbow and Heat Blast for use. Interestingly, Hypercharge doesn’t actually have a cooldown; it overheats you for eight seconds when used, but if you pass 50 heat again before the eight seconds are up you use it again to extend the duration. Similarly, your Automaton Queen (and before her, your Rook Autoturret) work better the larger your Battery Gauge is before you deploy.

And yes, that means even your turret is a limited-time thing. So the goal is clear here to build up a full gauge, then start deploying; interestingly enough, however, your actual combo deals more damage than Heat Blast when fully run through, and Auto Crossbow doesn’t functionally replace Spread Shot. Instead, they both have other bonuses for use when you’re hypercharged. (The latter has a faster cooldown than usual, while the former speeds up the cooldown for Gauss Shot and Ricochet.)

You’ll also be using Air Anchor, Drill, and Bio Blast in the middle to help up your battery gauge, all of which count as weaponskills and the latter of which share a recast timer. In short, you’re juggling a bunch of gauges and doing your best to maximize your weaponskills (not abilities) mid-Wildfire, but you no longer live and die by that ability.

Under the circumstances it’s still a bit early to be figuring out exactly how you should split your rotation and how to get the most out of each cooldown. But the important thing is addressing Machinist’s longstanding issue wherein you got a ten-second window to be good and a long chunk of time to wait for cooldowns to come off.

This does all of that. You want your Wildfire to be good, but that encourages you to cycle things and have fun building up, and no longer have to watch something go horribly awry because of timing that was a hair off. It’s definitely something that moves from being about shooting things with a side-dish of gadgets into more of a traditional engineer, but I’m absolutely here for that.

Bit of a shame it lost that magical vulnerability-up in the process, but then, how selfish can it really be? It has a robot best friend.

Final Fantasy XIV Shadowbringers tour: An interview with Naoki Yoshida
All of the gameplay previewed during this event is part of a test build and is subject to change in the final version. Travel and lodging for the event were both provided by Square-Enix, along with the most delicious little veggie quiche with goat cheese for breakfast. Holy crap, those things were delicious. I want the recipe.
Advertisement