Nexon’s new crossplatform multiplayer shooter Rocket Arena came out of nowhere last month and surprised everyone with a closed beta this past week. It’s a twitchy 3v3 FPS arena game – sounds familiar, right? But the twist here is that every hero wears a rocket pack. This allows you to triple jump, and if you’re close enough to the ground or a wall, to shoot your weapon at it and “rocket jump.” Get it? Rockets? Arenas? Pretty on the nose I’d say.

Also, rather than killing your opponents, you simply knock them out of the arena. It’s kind of like Smash Brothers mechanics; instead of a health meter you have a knock out meter. Fill it up and get hit, and you’ll be knocked out.

Read on for my full impressions of the beta as it currently stands in this edition of Fight or Kite.

The aesthetics are superb

Let’s put this out front: The comparisons to Overwatch will be inevitable, largely for superficial reasons, which isn’t a bad thing! That is to say, this game looks really good. The animations and characters are vibrant and alive. The world we get to see through the various maps is extremely colorful – each with a unique theme and style.

The beta provides six different heroes to choose from. This tends to be the design decision we’ve been getting from team FPS games recently; rather than creating our own heroes, we are given a selection to choose from.

There are advantages and disadvantages to this choice. On the negative side, of course everyone wants to be able to put his ideas and stamp on his hero. That’s one of the things that really latches us onto MMOs specifically. You made your character, and no one else looks exactly like that. In Rocket Arena, we can’t build the hero from the ground up; however, we can customize each hero. In the beta, there are four different outfits available for each hero. Undoubtedly, Nexon will use this for monetization (there is already a lockbox mechanic that pops up occasionally). I don’t really have much of an issue with this, so long as it remains a cosmetic feature and not a method of restricting heroes or abilities.

As for advantages to the preset hero route: I’ll reiterate, these heroes look good. When the heroes are pre-designed, there will be little to no clipping. The outfits and designs for the various heroes can be tailored to look and fit them perfectly. And since we are talking about a pure PvP experience here, when you see which heroes you are up against, you will know exactly what skills and powers to expect from them. There is no wait-and-see; they are who they are.

With respect to level design, Nexon again did a really good job in making sure that every one of them is unique and gorgeous. There even appears to be a stage themed for each of the playable heroes. 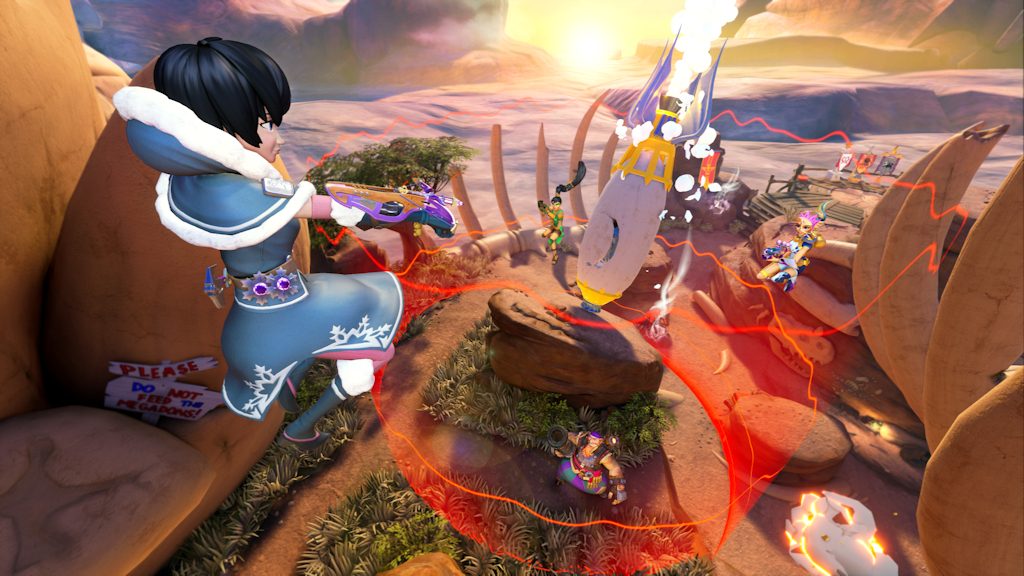 I mentioned before how sharp and pretty the different classes are, but I also want to talk about how unique each of them plays. There are essentially three skills that make up each character, and no two skills are the same. You have a primary weapon, a secondary one (which isn’t always a weapon), and a special skill. I didn’t notice any of the heroes’ standard WASD movement or jumping being different.

I really enjoyed the different special skills. While I wasn’t very effective with it, Kayi’s (she’s an ice princess with ice powers… but not that ice princess) special skill is basically the hook chain from Titanfall 2. I thought this was really cool. It let her zoom across the stage and reach extremely high locations quickly. At the same time, Plink has a teleport ball that you can throw to a location, and when you are prepared, you activate to be instantly teleported.

Now, while the heroes are unique, I did have one issue that is related to the heroes but perhaps gets down deeper into the gameplay itself. In each match you have a three-person team, yet you don’t really fight together, you are just on the same team.

Let me explain. While you are fighting over an objective or to knock out the opponents, there isn’t anything specifically you can do to assist your team other than shoot at the other team and knock them out. For example, in Overwatch, Reinhardt has a giant shield he can set up. If you are trying to take a point, he sets the shield and your teammates get behind it. Or if you are playing Mercy, you can keep an eye on your team’s health and try to keep them from dying. This is pretty standard stuff for MMO players. It’s team comp and it matters.

Here, it just doesn’t seem to matter so much because everyone is just pew-pew-pewing. There are some exceptions, but they really didn’t seem to be effective. 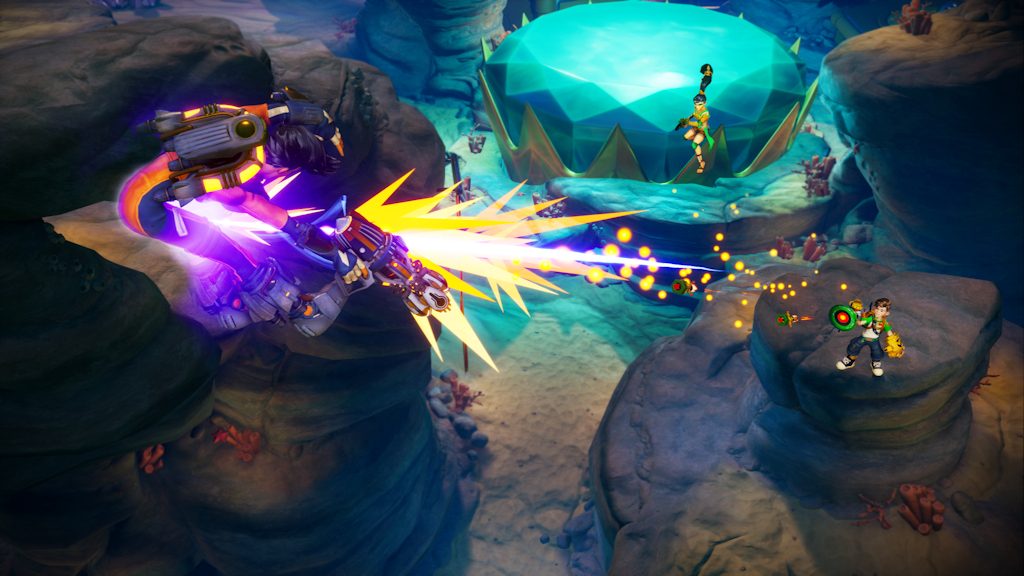 With that said, the game itself is very smooth. Jumping, running, gunning – I didn’t have any issues at all. Everything felt smooth without being floaty, although your hero is kind of floaty with all the jumping you are doing. It didn’t feel out of place or wrong, though.

Attacks felt very responsive. When I clicked, the weapons fired exactly how I would want them to. When you get hit, you know it right away, both by the feedback from the screen flashing red to the sound effects you hear.

I’ve said it before; I’ll say it again: Any game that wants to take PvP seriously needs multiple game modes. Rocket Arena delivers with four modes, one of which is even a PvE mode!

That’s correct, I said a PvE mode. Basically, it is a survival mode: your team of three vs. bots that continuously respawn. If your team can knock out 25 bots, then you win.

The three PvP modes are fairly typical. Capture-the-point and knock-out-all enemies (3x each) modes are par for the course with these FPS games. The capture-the-point mode is unique in that a giant rocket will randomly crash down and the team that holds it for some amount of time captures it – and wins. The knock out mode gives each player three lives (badges, I mean – no one dies in this game). The differentiation here, and in all modes actually, is that even after you lose all your badges, you can continue to play, fully. You can knock out opponents even. Weird. 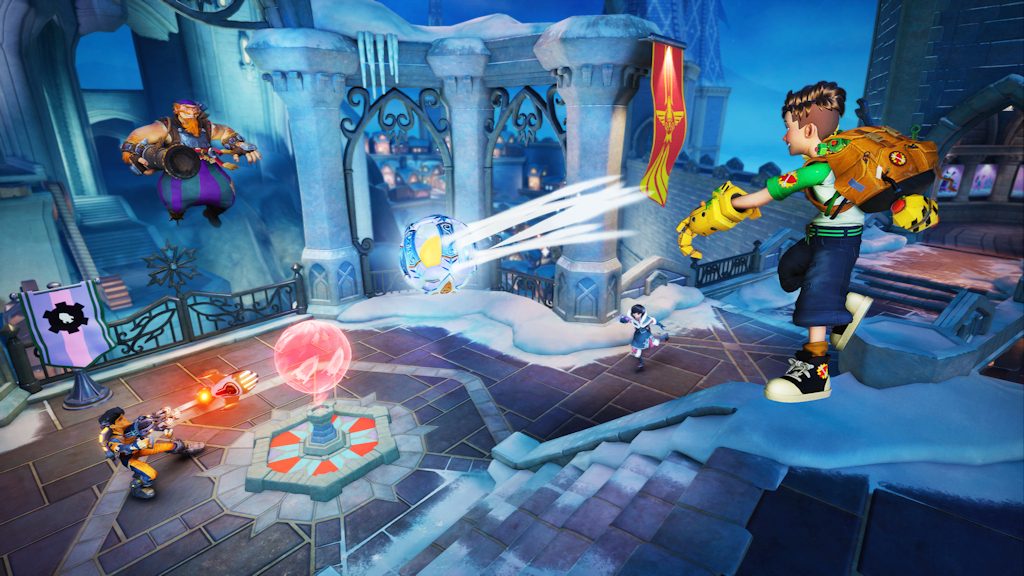 The last mode is the most interesting, as it’s similar to rugby (although SWTOR players might see some Huttball influence). There is a ball that spawns in the center of the arena; the first team to pick it up and throw or run it into the opponent’s goal five times wins. There is some kind of overtime mechanic, but it didn’t make much sense why it triggered.

There was one big issue here, and I hope it was only built in for the beta: The PvP modes used a single queue! Few things are more infuriating than waiting in a queue and not knowing which game mode you are about to be thrown into. These modes need separate queues by release, else I’ll suspect Nexon is not aware of player expectations at all.

Whom is the game for?

I ask this question with the best of intentions. When you play it, you can tell Nexon is purposefully glossing over the violence of shooting each other by saying, “Hey, no one is getting killed – you’re just getting knocked out of the arena.” So is this a game for kids?

I suppose it could be, but if it is, it’s going to be a brutal experience. I’m no professional FPS player, but the action leads to non-stop blasting. I’m getting shot from where? Behind me?! OK, wait, now it’s coming from over there and… WHOA! Someone just teleported next to me and – bang! I’m knocked out. Respawn and repeat.

Get used to that image because you are going to see it a lot. If Rocket Arena was targeting a younger audience, then I would expect there to be a high floor and a low ceiling on difficulty and performance of each player. But that just isn’t what you get. It is fast-paced and intense. Perhaps it wants to be a contender for esports gaming?

I’m just not sure if Rocket Arena is bringing enough to the FPS table to pull gamers away from Overwatch, Apex Legends, or even Fortnite. There is a lot to like about the game, but I am concerned it doesn’t have that little spark of magic that it really needs to stick to gamers.

So, rocketeers – sights lined up and ready to blast me into the past – what are your thoughts on a new entrant into the relatively crowded and entrenched FPS market? Do you think there is room for a new player? Do you think Rocket Arena has what it takes to be the best, like no one ever was? Or do you have some back-to-the-drawing-board ideas that could give it the boost it needs?

Aside from the name rip, I think it’s good that there is a non-frag, pacifest FPS for those who want a competitive experience.

You know, I also thought that name was from something else, but wasn’t sure if it was related or not.