I wasn’t expecting to be very excited about the new Star Wars: Galaxy’s Edge until I read there’d be an augmented reality game mixed in. Don’t get me wrong, I love Star Wars, but I’m also not real big on real-life theme parks. I choose games instead of TV for most of my entertainment because I want to do things (without physically endangering anyone), not just see them. The Millennium Falcon ride sounded cool, but an interactive app that essentially gave me a reputation to grind sounded oddly fun. I know I’m not the only one who plays with NPC reactions!

I expected something like a non-combat yet massive Dungeons and Dragons game (or Disney’s Legends of Frontier Land) but with app tracking to reinforce rules. I already enjoyed some local fame in Pokemon Go as someone who not only took gyms, but organized raids, events, and traded useful Pokemon to new players in our community. This simply seemed a bit more next level, though the expenses immediately threaten that. With real people acting as NPCs and giving the potential for some real-world quests based on digital activities (and knowing that Nintendo’s actually working on a game-themed Universal Studios area), I had to see how the history of genre may (or may not) be repeating itself. 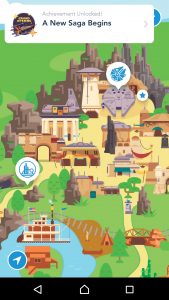 The Disney Play app isn’t solely about Star Wars, so don’t be alarmed with how cutesy it looks before you’re using it as your datapad. You can get a bit of a basic rundown from Disney Food Blog (of all places!), and even check out the features outside the park, but it’s fairly basic. Outside the park, the app only allows you to access your profile (Note: Progress isn’t tied to your Disney account, it seems). You can’t turn in, accept, or even check your quests, which sucks because once you’re there, you have a lot of text to go through, and most of it felt rather dry.

In the park though, you can use the app to translate Aurebesh, the Star Wars alphabet, “hack” devices as part of quests and a park-wide war (which sometimes actually is something you can see acted out in meatspace), keep track of your Smuggler’s Run runs (it’s basically a multi-crew, single ship game that I highly recommend), and scan stuff around the park as you earn credits and gear for your avatar. One thing to note, though, is that progress is saved to your device or platform. 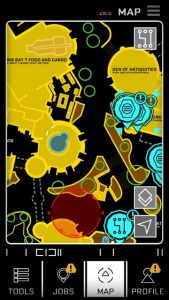 See, the game will rapidly drain your phone’s battery even though the screen is mostly text and flat images. My usual phone (an Xperia Z5) actually overheated as if I had been playing Pokemon Go on a hot day, but I’d brought an iPhone with me as I’d been having issues (long story) and it ran well enough on that, though I still dislike the iPhone’s UI input.

And the game itself is, well, pretty basic. Puzzles start simple and get harder as you progress. Hacking and scanning felt satisfying because they feel like puzzles, with the former feeling maze-like and the latter, well, essentially being like a jig-saw puzzle. Tuning (basically physically manipulating your phone as the game asks) and translating (typing out a code you see) less so, though translating felt like it wasn’t used a lot. I half wonder if any Aurebesh that forms a Star Wars character’s name or an English phrase would work, which might be one reason we’re not allowed to play outside the park. 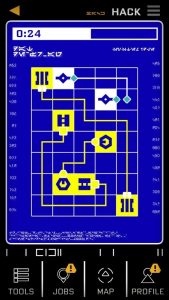 The mode of execution is run of the mill too. Think about MMO quest hubs: Just grab every quest so you can stack them, right? It’s the same here, and yes, you can play both/all factions on the same character. I’m not sure if there’s a downside to that, but as someone who’s always been more concerned with the people caught up in the fight between the Rebels and Imperials, I actually really like this feature. For most fans though, factions probably won’t feel too important, nor will progress (if there’s any being made).

For example, avatars are simple costumes you get; there’s no making a Trandoshan or picking your eyes or lips. You’re just a faceless blob in some clothes. You earn schematics, weapons, and other objects, but I’m not sure they have a use right now. Credits can occasionally be used in a quest to purchase something, but my dreams of using them for some real-world exchange for coupons doesn’t seem to have come true.

In fact, all the reviews I’d read about comments on your game activity (especially the Smuggler’s Run ride) seems like something only VIP PR people and Disney cast members get to experience. Granted, that may be why the cantina is so heavily limited and required an immediate reservation to be made when we entered the spire (which I couldn’t hear; Disney didn’t seem fully prepared for actual crowds in my opinion). 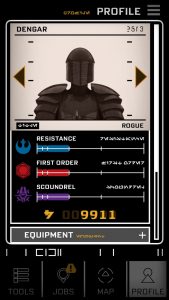 I sadly didn’t get into the cantina to test out to see how/whether Disney cast members would react, but I did make several purchases after doing Smuggler’s Run twice plus tons of quests, and I received no comments. In fact, the “reactions” to hacking features in the park that I’d heard of (some of which I couldn’t see, others I was right in front of) didn’t register to me. No steam popping out or whirling lights, just progress on my little phone screen. Maybe it’s because the park was so busy, but I largely felt as if I was just playing POGO in Disneyland without the graphics. It mostly felt like nothing I did mattered.

The only major upside was that the “Scoundrel” faction has some kind of secret-ish bonuses. If you ask something like, “How much is it worth to you?” at the end of certain missions, you get a few extra credits plus Scoundrel faction rep instead of the regular one. That felt cool and may or may not be related to an item I got that could skim credits off of a Blackspire-wide faction war node.

The app did have a bit of a POGO feel in that people pointed out where the puzzles were, but they gave no spoilers or tips. The Smuggler’s Run pre-shooter mission would be cool as a normal quest with the way it was done, but it really needs the actual ride’s line to move at a specific pace. It asks you to do things like count vents on the Falcon or physically scan cargo. If the line moves too quickly or the user’s phone loads the dialogue too slowly, first timers just have to guess or skip the quiz-like nature of the game. A teacher obviously didn’t work on the quiz since it’s too easy to guess your way through, which is less than satisfying. My second time through it (as you can repeat missions) felt almost completely the same, which really kills the replay value.

In short, the Galaxy’s Edge app felt mostly like puzzle dailies you might expect in most MMOs, but they required you to be in specific places in real life. Specific, expensive places. I didn’t feel as if my actions changed or activated anything in the park. Maybe regulars will be acknowledged by Disney staff, but I mostly played the game during my scheduled time and I felt like I mostly played a phone game. Even admitted veterans who got multiple passes inside Blackspire didn’t seem to get any attention around the spire, even though I know the app tracked things like Smuggler’s Run without my directly inputting my results. The game was a good distraction and helped me learn the lay of the land a bit, but between the entrance fee and the prices for everything, I couldn’t help but feel disappointed. That being said, there was a trading option, so maybe there really will be more development in the future, or at least more chances for recognition for repeat visitors.