I am not sure how everyone else felt about the special Synthesis super league in Path of Exile these past few weeks, but I absolutely loved it! It was some of the most fun I have had in game, and now I am very sorry that I avoided it for so long. If you didn’t participate in this event (as I almost didn’t), you missed out on a league of leagues, a league-a-palooza. There were no less than six leagues all smooshed together in the playfields: Harbinger, Abyss, Breach, Perandus, and Essence joined Synthesis. And what an intense experience it was. Please, Sir Grinding Gear Games, can I have some more?

END_OF_DOCUMENT_TOKEN_TO_BE_REPLACED
I really do want to see more of these. Not in lieu of the regular leagues of course, but definitely as an additional fun run once in a while. I would play the snot of of those.

Don’t judge a league by its cover

I like to think of myself as one who doesn’t judge things by appearance; I try hard to be this way throughout my life. Sadly, when an alternate league to Synthesis was offered, I pretty much dismissed it out of hand. It wasn’t a negative thing; I just personally liked Synthesis, so I didn’t intend to leave it. The alternate league was presented for folks who didn’t like Synthesis and needed something else to appease them. My first thoughts were really long the lines of, “Aww, poor unloved Synthesis, I still love you. I’ll stay.” Add that to the fact that I feel like I do not get enough time in any individual league as it is, and you can understand why I didn’t want to start yet another. 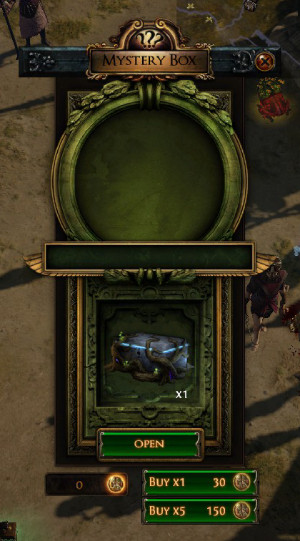 And then a friend began tempting me. He pointed out that you could earn a cosmetic box for making it to level 35. Certainly I’d love a cosmetic box, especially since he obtained a pet from his. A pet! My favorite thing. Oh, there’s just one thing: There was only one week of this league left. Hahaha, right! I hadn’t even done that in any previous league save for Standard, where my league alts get dumped pre-leveled. Only one Witch has broken that level barrier. My next highest are 24 and 21 Scions and a 22 Witch. No way would this happen with my playstyle. I couldn’t possibly, even with my friends’ help. And I would need their help, since I won’t ditch playing what and how I want to just to get an “optimal build” in order to complete the task. (The 100% XP bonus for grouping helps too!) No, not even for a cosmetic.

And then came the clincher that led to my cheating on Synthesis after all: I would be able to experience a multitude of leagues all at once, including the first I’d ever dived into, the Perandus league. Sorry, Synthesis. I had to see what I had missed out on.

I thought that the big sell for me would be the chance for a pet (spoiler, I got boots instead *sniffs*), but discovered that was only slightly behind what actually drew me in. Yes, I started it for the chance for the pet, but I stayed and had fun doing it because I was getting to experience a number of leagues that I had missed for one reason or another.

Usually, I find myself unable to devote tons of time to PoE leagues, so I just didn’t jump in any that didn’t particularly spark my interest. The first league I actually played was Perandus, and I was pretty sad when it left. That may have colored my perception of the next ones and dampened my desire to play them. After all, I’d never get far enough and then would have to deal with the loss of the league all over again. (Hint: I don’t do well with losing favorite game modes.) I did do some Prophecy, but a league didn’t override these feelings until Bestiary came along. Capture critters, make a menagerie — this was right up my alley! I was excited to play and I was invested, so I dived in eagerly. By that time it that meant I missed five other challenge leagues in the meantime; instead, I stayed mostly in Standard.

I was still pretty bummed when Bestiary ended, but Incursion, Delve, and Betrayal all drew me in as well. After enjoying these, I discovered I was actually much more tolerant of their temporary nature. I actually look forward to what the next leagues be even knowing I won’t finish. And now, I had to wonder what I missed out on by not diving in and trying out those leagues in between. I might have really enjoyed them as well had I given them a chance. I would never know. Or so I thought then.

So now you see why adding those those other five leagues in really sweetened the pot for me. I was prepared to try and grind it out anyway, but the other leagues made the grind fun. And fun means not grindy! It is much easier to power through when you are having a blast blasting things.

The key to really enjoying this experience was not that it offered the chance to see those other leagues but that it flooded me with those league events everywhere I went. If each zone had just one league’s event in it, it would have been just the same run I’ve done in zones a bunch of times, with an occasional twist. I mean, that’s how regular leagues go — you get one event per zone. 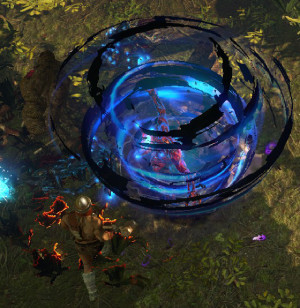 No, league-a-palooza made you experience many of the leagues all of the time! There was no boredom as you ran across (and sometimes mistakenly tripped before you were ready) multiple events in a row or even at once. Have you fought a whole mob of Perandus while Harbinger was tossing enemies at you and an Abyss opened up under your feet? Now I have! And wow, is it ever a rush! I loved it. I loved the intensity, and I loved the variety. Running all those early zones again felt different and had an air of the unexpected. And when you get used to blowing through those early zones, it sure is nice to be knocked around by some serious challenge again!

This is what I really, really want to see again. Not just a combination of a league or three, but the experience of coming across multiples at every step of the game. It truly made those early levels fly by. And yes, it made it possible for even me — me, with my moseying, unharried type of gameplay — to actually hit 35 in a single league. In one week of a league no less! I’d be happy to see a mini two-week league just like this to crop up again. I am really hoping we do.

What about you, did you experience this league of leagues? Did you like it? Would you like to see it again?