A new month means a new game here at Choose My Adventure world, and this time around we’re taking a trip through what I remember being one of the more enjoyable Korean MMOs to play, TERA. I say that I remember the game being fun because it has been a little while since I did fire this thing up and I basically always got the impression that the combat in this game is the best sauce. The results of the first round of voting may have dulled that sauce a bit, though. Allow me to explain.

END_OF_DOCUMENT_TOKEN_TO_BE_REPLACED
The polls last week ended in a tie for which class I should pick up between the Valkyrie and the Gunner. I once more let fate decide this month’s class with a coin toss and the Gunner won out. Avoiding the Elin like the plague they are, I made a high elf Gunner, tried my best to ignore the female “armor” design, and started about the task of playing the game. 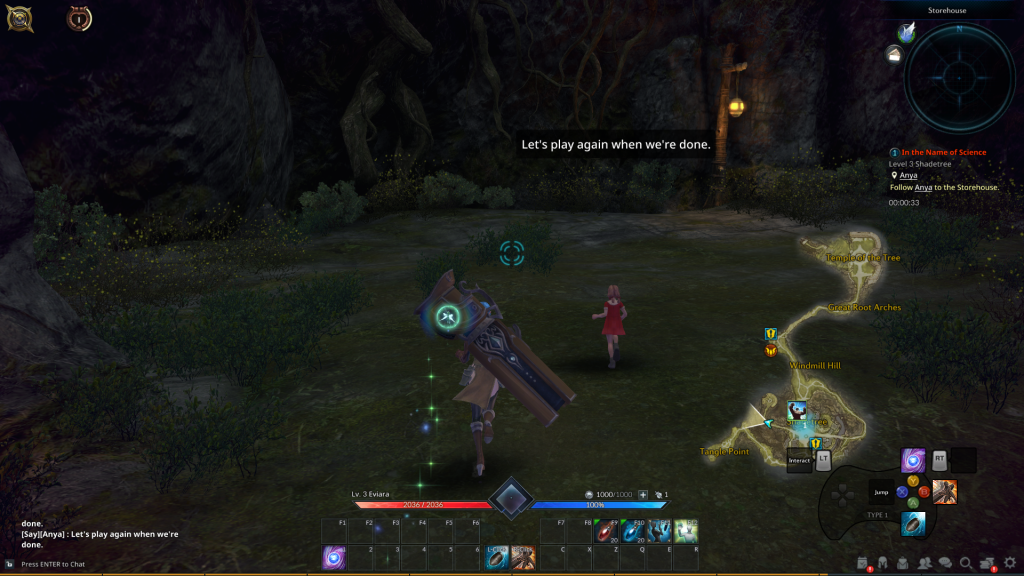 The lighthearted and carefree introduction of this small person pretty much spelled her doom from the moment I saw her, and as the opening quests played out, I was proven right. I guess she made a sacrifice or something that I’m suppose to feel moved by, probably. I instead absolutely blitzed through the quest text. Seriously, everyone, after coming from the narrative interest of the Imperial Agent in SWTOR, this is like eating Steak-umms and Jell-O vanilla pudding the day after you had porterhouse steak and crème brûlée last night.

Regardless, I recall that the “true action combat” model for TERA was always the point of this game, so I instead looked forward to seeing what the Gunner class was like. In short, the Gunner maybe diluted things a wee bit too much. The variety of skills that the Gunner seemed to have at their disposal were certainly interesting enough, with shots that did huge chunks of damage and even knocked down enemies sometimes. There was also the Willpower resource that built up and could be spent with certain skills, including one that effectively let you root your feet and unload a gatling gun-like barrage on some fool.

As explosive and hard-hitting as the Gunner’s skills really felt, though, they all seemed to lack a certain level of complexity that I remember enjoying in other TERA classes. Timing attacks, linking skills together, or even blocking things effectively in the case of the Lancer really made you engaged in even the most routine of fights. Here, though, I effectively just point and shoot. I even have a combo that lets me fire a shotgun-like blast, dodge roll away from danger, and fire another shotgun blast as many as three times in a row. This didn’t really feel like setting up enemies for pain so much as just an MMO equivalent of a rushdown fighting game character. It was way too simple. 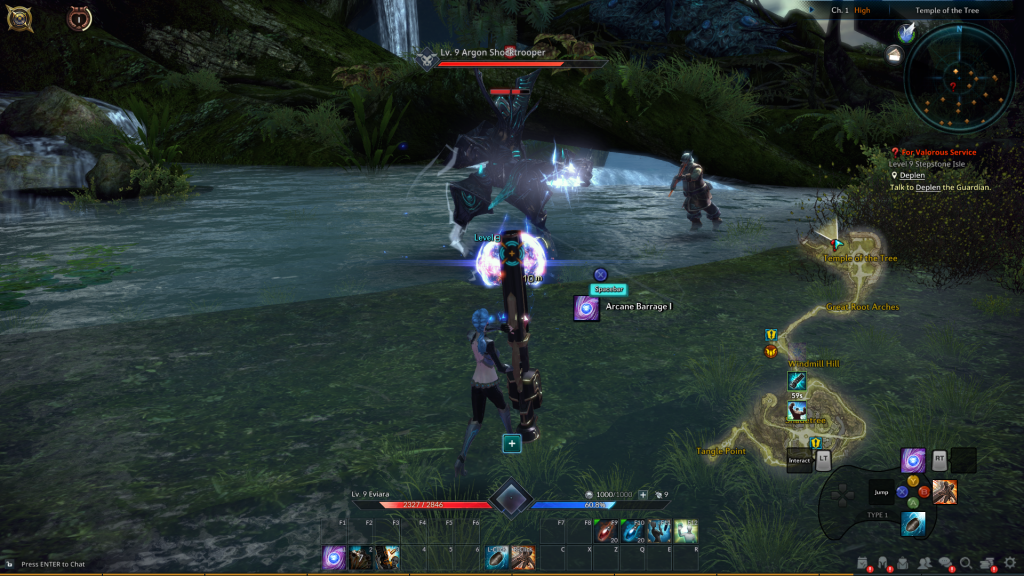 The shotgun-roll-shotgun combo wasn’t the only one that felt too easy. There are at least another couple of attack strings that basically mean the Gunner gets to unleash damage on enemies with almost near impunity, particularly with the application of an admittedly very stylish reload skill that recharged the cooldown on certain buttons as well as restored my MP.

I suppose this is all by design. Comparing the TERA Gunner to a rushdown fighting game character is probably its intended design. I also perhaps am oversimplifying things here, following too closely to the auto-combo prompt that has me hitting the X button on my controller ad nauseum. Perhaps if I were to link up my own skill chains, I would find things more mentally engaging. My first few attempts at doing just that did help to re-energize my brain, but enemies fell over far too easily regardless. In fact, using my own combos may have made the problem worse.

It’s perhaps a bit too early for me to tell for sure, but I might need to switch things up as we continue along this TERA adventure, particularly if this game is to hold my interest and yours for an entire month. Which pretty neatly leads in to the poll choices I have planned for this week. 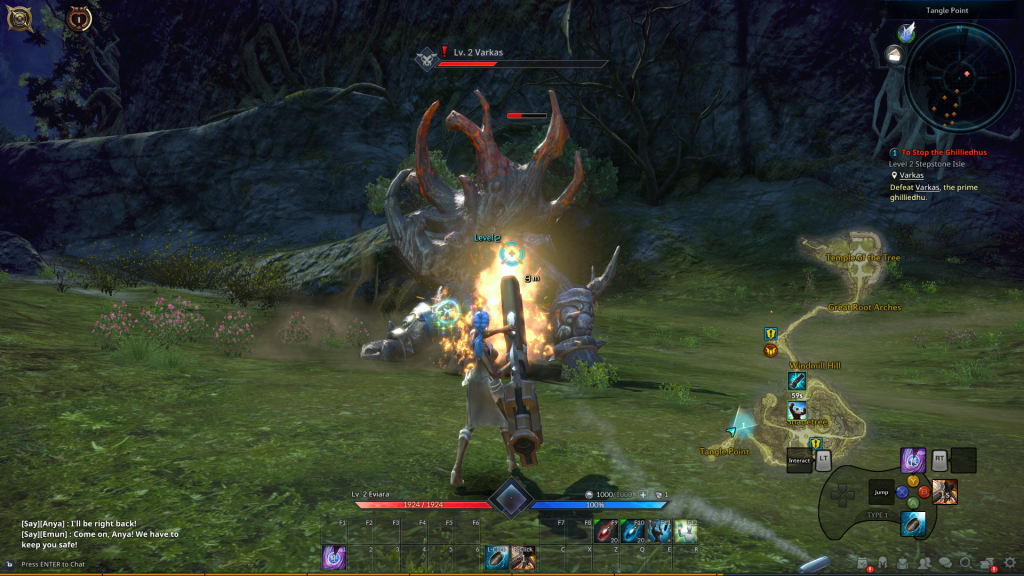 I’m basically asking the question of class focus a second time, but this one has a more narrowed focus, which hopefully will lead to less ties and more decisive decisions. I’m willing to focus on the Gunner class if that’s what people want to see, working my way through its gameplay style and leaning in to things a bit more. However, I also am not so far along in the game that doing a reset as the Valkyrie class would hurt my feelings, especially since that class might have more complexity. I also had completely forgotten that I have a level 24 Brawler, which not only opens up more skills but has me further along in TERA overall.

So with that in mind, which class should I focus on moving forward?

Which of these three TERA classes should I focus on?

Next up, a poll about moving things along regardless of which class I’m told to focus on. As with other free-to-play MMOs, TERA offers a variety of “premium” perks for those who decide to maintain an active subscription. I’m willing to light up some scratch for a month mostly for the increased XP gain, which could rather helpfully speed things along and maybe get me that much closer to more activities to follow through with. Of course, if folks are more keen on seeing how much it takes to get to the good stuff as a free player, I’m more than willing to bow to those demands as well.

What’s it gonna be, friends: Get on with it, or get busy with it?

Should I subscribe for a month to speed things along? 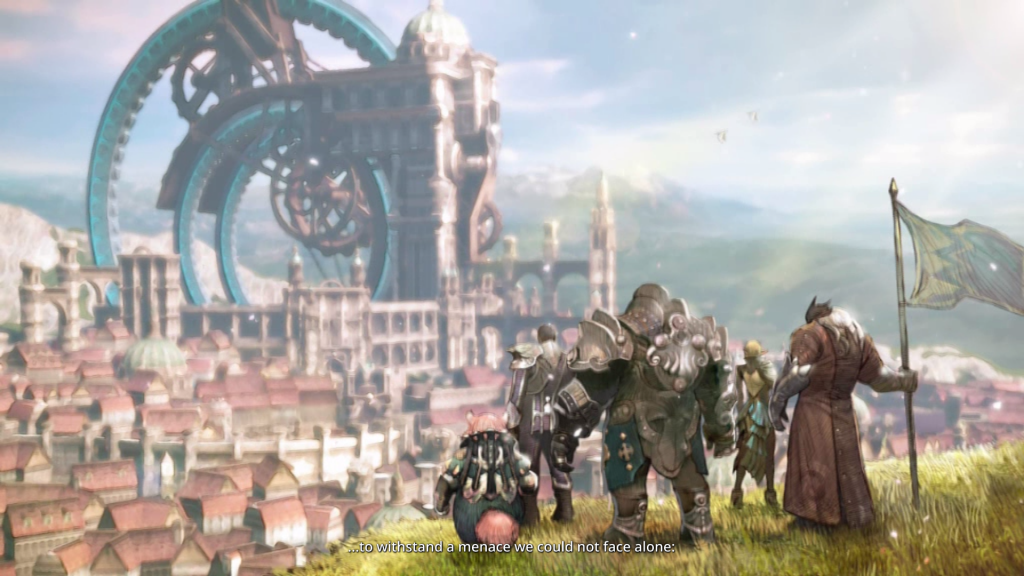 1:00 p.m. EDT this coming Friday, June 14th, is the end of polling, like the usual. I’ll be in a holding pattern in TERA for the time being in the interest of keeping next week’s impressions free of any bias that learning the Gunner class might introduce. I promise I’m not just saying that because I want to play a different game instead. No, really. Why are you looking at me like that?

Not sure where this is coming from… every class in Tera is too easy. I never once had to think while going to cap and that was way back when Gunner wasn’t even released.

I disagree. Warrior, Lancer, and Berserker all require good timing for blocks/dodges for damage avoidance. Mystic and Priest like any healer class really flourish when leveling with a partner rather than alone. All 5 of these classes require thought to get to level cap beyond just button mashing the same skills over and over again. Additionally, the lack of tab-targeting makes aiming a requirement which requires more thought than “tab 1,2,3,1,4”

All the new classes are easy and ruined the game. If you want to actually experience TERA play one of the original classes

The fact that you’re blowing through the quest text is disappointing. One of my favorite things about TERA was that the text was loaded with pop culture references, some of it dating back to the 80s. I’d go so far as to say all of those hidden gems make it some of the best quest text I’ve ever read in MMOs.

Is the quest text really worth reading solely for some pop culture references? I don’t think I ever bothered even when it originally launched and it was a subscription based MMO.

I guess it depends. Do you ever find quest text worth reading? If so, what makes it interesting for you?

Sometimes it’s nice to know what someone’s motivations are, even if they’re just NPCs. If the writers make that information interesting, then it becomes another part of the game that can be enjoyed. Not all writers can do that of course, but I feel the ones who did the text for TERA managed to pull it off.

Eventually TERA becomes a grind regardless (around level 40 if I remember right). At least reading some cleverly-written text along the way helps break the monotony until then. :)