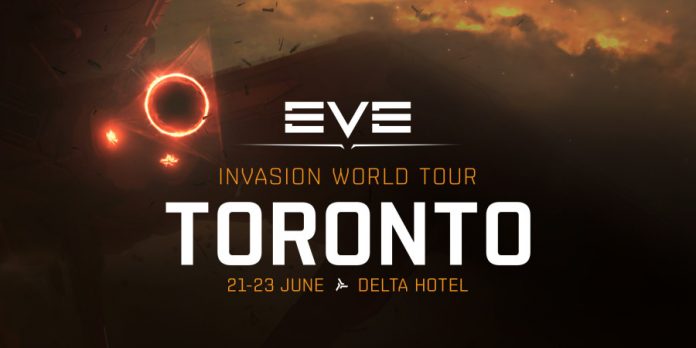 The EVE Online world tour is on the road again following three successful events in Amsterdam, St Petersburg, and Sydney (or is it Sidney?). This weekend the festivities are taking place in Toronto, Canada, as CCP developers descend on fan meetup EVE North to transform it into a mini Fanfest-style conference. MassivelyOP has been following the entire world tour and is on the ground at the event to hear the latest on EVE Online and hopefully get some insight into the Canadian playerbase.

END_OF_DOCUMENT_TOKEN_TO_BE_REPLACED
You can follow the event today and tomorrow live on the CCP Games Twitch channel with help from the Streamfleet community, and check out the programme schedule to figure out what to watch. The event kicks off today at 10AM EST (GMT-5), with the EVE Keynote at 11AM. CCP Fozzie and CCP Lebowski will also delve into this year’s delivered and upcoming features in the EVE Development Variety Hour at 1PM EST. We’ll then get a series of talks from a variety of player speakers on everything from how Wormhole life has evolved over the past year to an update on the Triglavian storyline currently playing out in-game.

The next leg of the World Tour 2v2 tournament series will also be taking place at the event, with the winning team getting some nice Corsair gaming swag and a fully paid trip to compete in the finals at next year’s massive Fanfest 2020 in Reykjavik, Iceland. As the event is sponsored by Corsair, there could also be some prizes given out throughout the event. Those in attendance will also be able to participate in a silent auction for charity Extra Life.

Disclosure: In accordance with Massively OP’s ethics policy, we must disclose that CCP paid for our writer’s travel to and accommodation at this event. CCP has neither requested nor been granted any control or influence over our coverage of the event.
Advertisement

Disclosure ;)! I don’t play Eve, just wanted to say that I think it’s neat that they came to T.O. Really lucky on the week though!

Same here, was debating driving over to check things out this year but since I don’t play decided not to.

Yeah we finally got some beautiful weather!