Summer smiles — get ’em while they’re hot! If you are looking for a way to make your mood rise like the temperature, we’ve got you covered. The MMO sphere is full of summer goodness. From studios to individuals, folks are flocking to good causes. And those causes range form helping groups to specific individuals.

This month we highlight some special developer team ups. Square Enix partnered with an organization to bring aid to heroes, and Bethesda partnered with another that turns people into pets’ heroes. TennoCon and Guardian Con cooperate to help both Warframe and Destiny fans collectively raise funds for charities. We also get to see individuals making a difference, from enlisting aid for a player to encouraging parents to play video games with their kids. Here’s a look at good deeds of the past month.

When many run away from a disaster or emergency, first responders run toward it. And in doing so, these heroes can lose much while saving others. Ahead of Final Fantasy XIV’s Shadowbringers formal July 2nd launch, Square Enix joined forces with the Gary Sinise Foundation to provide resources and support to America’s real-life “Warriors in the Darkness” — America’s defenders, veterans, first responders. From now through August 14, 2019, fans can visit the official Warriors in the Darkness website to donate and help raise awareness for the nation’s brave first responders and veterans.

Square Enix will take your support, and raise you one: The studio will match all donations made to the Gary Sinise Foundation through the Warriors in the Darkness website up to the amount of $50,000.00. Those funds will go directly toward national and local programs that honor and serve these real-life heroes and their families 365 days a year. Anyone wishing to donate here can go to the official site. 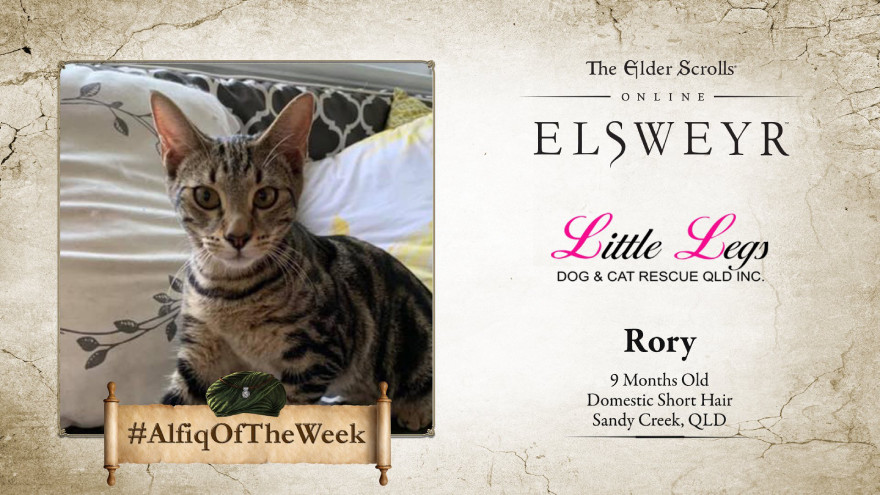 Using your influence to help strays find furever homes? That’s what Bethesda is doing. To celebrate the launch of Elsweyr, the Elder Scrolls Online studio partnered with The Cat Adoption Foundation to help find homes for “the jolliest breed of the Khajiit, the Alfiq.” The Cat Adoption Foundation is a foster care network that rescues, rehabilitates, and rehomes kitties in need from all over. Bethesda will highlight a new Alfiq each week. Two beautiful felines have been spotlighted already. Who will be this week? You can follow along on twitter with #AlfiqOfTheWeek.

Call in the cavalry

When a World of Warcraft player had a health crisis and needed help with mounting rehabilitation bills, Blizzard employee and author Christie Golden called on the Twitter cavalry to come to her aid. Instead of just soliciting cash (which some folks opted to do anyway!), Golden asked players to check out and support RetPallyJil through her stores. Buy something you like and support a fellow gamer? Sounds like an amazing deal, and some amazing goodwill.

1. Hey everyone, you may know @RetPallyJil from my feed. Recently she had a health crisis that left her comatose and is now in a residential physical therapy center learning to walk again. She's exhausted her insurance and would appreciate it if you'd support her stores to help:

You likely know that Digital Extremes delivers a massive chunk of the proceeds from Warframe’s annual TennoCon ticket sales to charity. After all, we cover that every year. But there is another gaming convention happening the same weekend that does the same thing. And even better, Digital Extremes promotes it!

Starting in 2015 as a fan meetup for a couple of big Destiny streamers, the Destiny Community Con moved from a meetup and became a charity event in 2016, raising over $500,000 in donations for St. Jude Children’s Research Hospital that year. Since it had no official connection to Bungie, come 2017 the con was rebranded as Guardian Con. Guardian Con then raised over $1M that year and over $2.4M in 2018. For the 2019 convention, Guardian Con’s goal was to break the $3 million mark, and it broke $4M!

Some of Guardian Con’s growth can likely be attributed to the support from Digital Extremes, a developer totally unrelated to the Destiny game. DE hosted Guardian Con immediately following the end of its own TennoCon live. The studio even offered special Guardian Con in-game rewards to Tenno. It appears that Bungie will be joining the action with an official presence at Guardian Con 2019. And Guardian Con goers wont have to worry about missing out on TennoLive announcements, as it will be sharing TennoCon Live reveals down on its main stage!

Two cons coming together to support one another, both raising stacks of cash for charity. Bravo all to all involved, from the folks in charge to the players who support and donate. You rock!

You can never read too much about games and gamers getting in there and raising money for charity! The Military & Veteran Gamers Group hosted a 72-hour charity livestream starting on June 21st to raise funds to create and send care packages to US military personnel serving overseas. Escape From Tarkov gameplay was a focus of many streamers, and devs from Battlestate supported the event by providing goodies like game keys and t-shirts.

Go play with your kids!

No one needs to tell us to go play video games with our kids, but it sure is nice to see when other media puts out the same plea. The folks over there at Lifehacker have published an article titled Get Over Yourself and Play Video Games With Your Kid. Yes parents, you can bond with your children without being gaming savvy. The article offers tips, from letting kids pick the game to parents setting limits, and suggest the parents might really appreciate the time to talk, bond, and just be together. Also, they might just come to realize how awesome it is. As the author puts it:

“The main reason you should play games with your kid is because it’s flat-out awesome. I love playing video games with my kid. It’s a way of spending time with my favorite person, doing something we both enjoy.”

Obviously, we already know all this, but we are pointing this out to you as something you can share with any non-gaming gaming, friends, coworkers, or neighbors who might need it.

Sometimes the impact is huge. And other times, the impact is huge to an individual. For one player, the implementation of legacy servers brought back a love for MMORPGs. Many of us has been there: falling out of love of our favorite genre because things — the world, us, the games — changed. The Lord of the Rings Online’s‘ recent Legendary servers reignited one Reddit poster’s passion for the genre during a difficult period in life.