When TERA was voted as the choice for this past month’s Choose My Adventure subject, I pretty much went in to the game with tempered expectations. Not low, mind you, just tempered; I was looking forward to a few fun romps in an entertaining enough video game with a new class. That mindset actually had me fully prepared to enjoy myself in TERA, and it also made me ponder why people are so averse to MMOs or games in general being “just OK.”

END_OF_DOCUMENT_TOKEN_TO_BE_REPLACED
I guess I can’t be too terribly surprised, if I’m honest. Gaming equating a 5 out of 10 as the starting line for crap has been a thing in the minds of many since the days of EGM or Nintendo Power. Mediocrity, as a rule, is something to be reviled at best or avoided at least. Why shouldn’t we demand more out of our entertainment if everything else in our lives is just drudgery? Because sometimes, you just gotta turn off your brain, sit on your ass, and just let it flow, man. 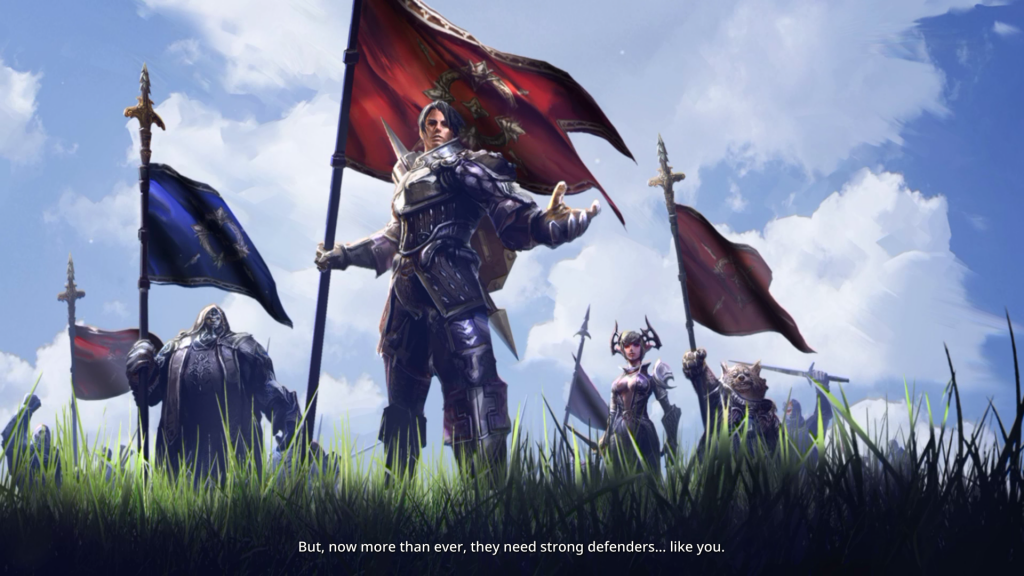 Here’s the thing: TERA by no means is a barnburner of a game for me. It’s not even going to remain on my drive once I’m done with this column. But that doesn’t mean I hated my time with the game or that I’m upset that I had to play it this month. I had a lot of fun (once I got rid of the Gunner) and will certainly be feeling the itch to climb in to the game and fire it up from time to time. That’s more than enough to be a successful game in my eyes.

I look at most MMOs like I look at most movies: with a cocktail of interest and indifference. I don’t tend to put too much stock in either form of media to affirm my life or blow my mind. That’s not how I operate, no matter how many times game ads would like us to believe we all act that way. So perhaps my expectations for TERA were low, but it also means I wasn’t disappointed. 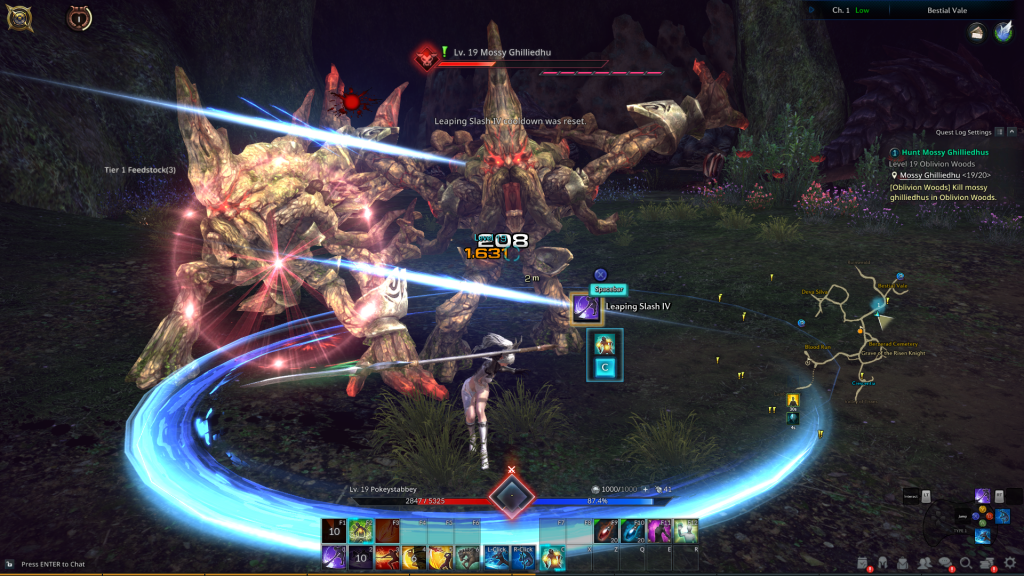 It’s not only about avoiding disappointment that I find games being “just OK” a boon. I also like to enjoy the ride. TERA as a world holds no interest even if it does have a great deal of beauty. The story beats were so routine that I ignored them entirely. Even so, the combat in the game is just so tightly wound and refreshing that it’s more than enough to carry things from utterly boring to extremely fun.

Obviously, what’s fun is intensely subjective for a lot of people, but just the simple joy of TERA’s rewarding form of action combat is all I could ever want out of the game. Every once in a while, I just want to hit things with extremely flashy skills using an impossible weapon, and TERA scratches that itch unlike any other MMO I’ve played before or since. When this game doesn’t have that, it falls utterly apart in my mind, which is why I was hoping to be able to drop the Gunner class. Just having that sense of fun is all I needed to have TERA endear itself to me. It fed a basic need for me: to provide a fun and rewarding combat experience in nearly every engagement I would have. That’s good enough, and I’ll take that over not having anything else. 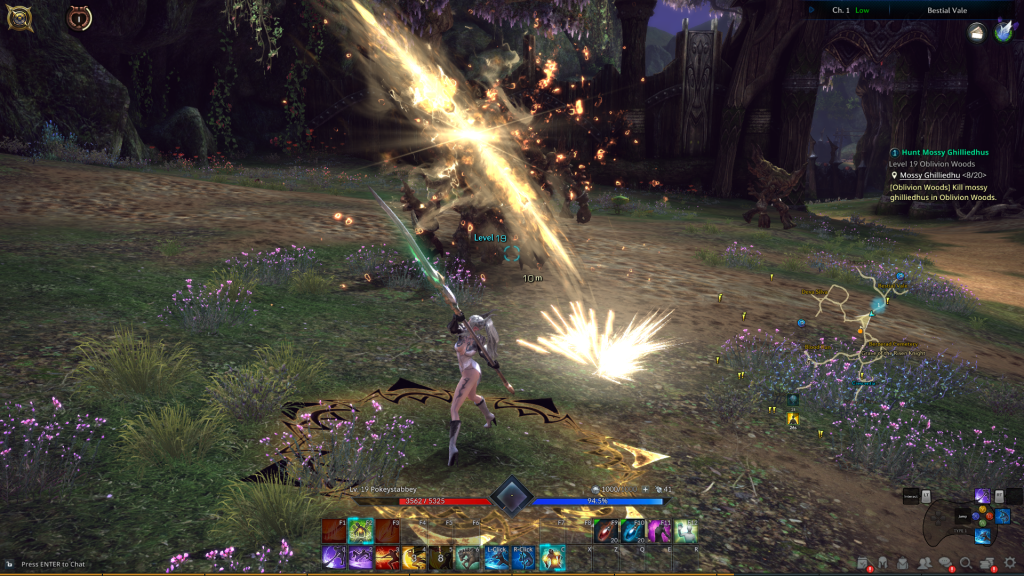 I also tend to be all right with “just OK” because I don’t really care about the effect of what I like on the grander scale of this industry. There’s been more than enough arguments about whether MMORPGs are dying, diluted, or otherwise headed for ruin or whether we’ve all finally woken up from the long, awful nightmare of the WoW-like into a new Age of Aquarius. Perhaps I’ve just been exposed to the noise long enough to have finally had it with worrying about it.

Here’s the thing: TERA was entertaining to me and me alone. Granted, I was sharing my experiences with all of you in the hopes of getting our community involved and inciting discussion, but in the end my enjoyment was the only thing that mattered. It’d be extremely difficult for me to write about a game if I didn’t like what I was doing, and it would also likely end up being just the most depressing thing to read. And besides, I tend to like spreading joy over bile anyway. The internet has enough angry video game nerds. I don’t want to be a drop in that cesspool.

So I like what I like and damn the consequences of the genre entire. If liking TERA is somehow the butterfly effect that topples this genre, then so be it. Count me among the senators stabbing Caesar. I’ve gotten to a mental age when I can’t hold on to hate any more. I’d rather have fun with others, and if those others are just rushing around TERA and facerolling a dungeon, then let’s go and have that good time. 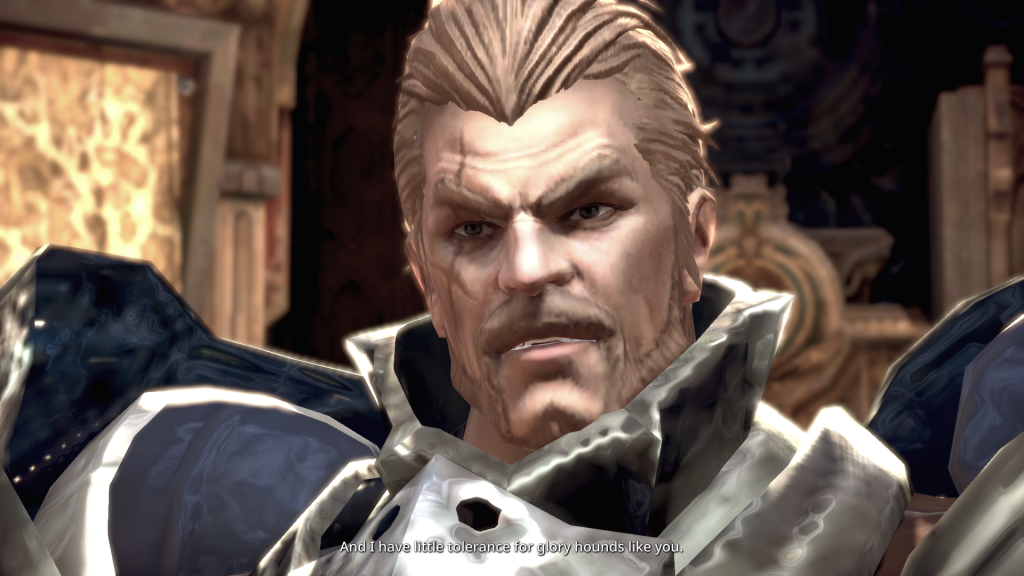 Enough pontificating, though. It’s time for the superheroic! We’re heading for a Homecoming with the City of Heroes rogue server and I am extremely ready to get it on. According to last week’s polling, we’re on our way to Praetoria and will be rocking a Mastermind along the way. First, though, we must answer the most important CoH question of all: What powersets do I use?

First, the primary. Choose My Pet-venture!

What primary powerset should our City of Heroes character use?

Next is the secondary powerset. Admittedly, this one holds perhaps less impact and possibly interest, but all things being fair, we’ve got to get this step complete. There are a LOT of options here, so I’ve pared them down to the ones that intrigue me the most.

And what about our secondary powerset? 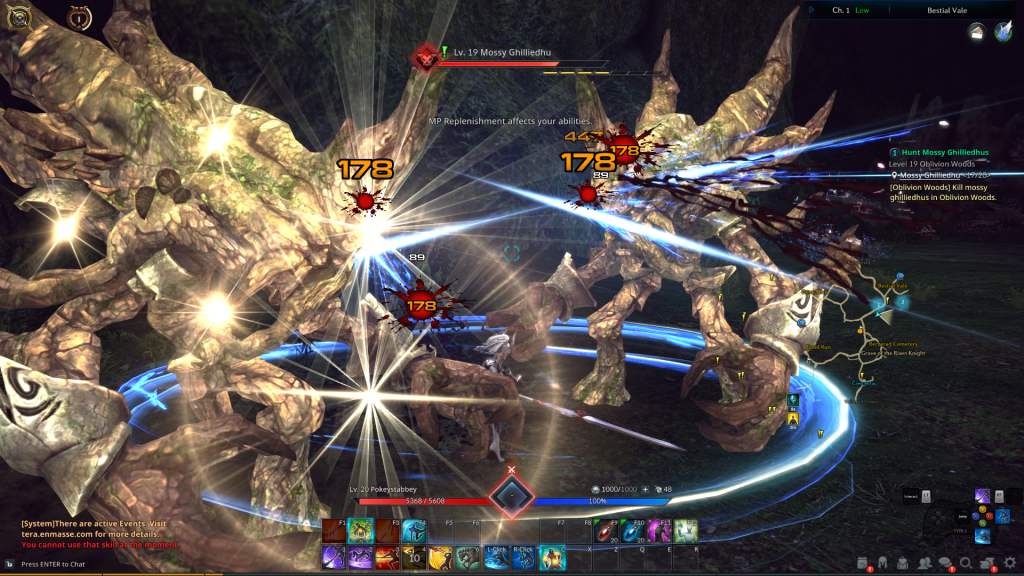 This week’s polls will close at 1:00 p.m. EDT on Friday, July 5th, as usual. I have a feeling I know what primary powerset we’re going with, but I’ll be watching the polls with a great deal of interest regardless. In the meantime, remember: There’s nothing wrong with liking things, no matter what the comments sections have to say.

I think the reason why I enjoyed TERA was it was just dumb fun.

Video games are the only art form where reviews like “6 out of 10” or “flawed, but with good points” looked upon as being absolute crap. I suspect that is the result of various games media sites implicitly selling positive coverage in return for access: because of that, we’ve seen too many mediocre games get high review scores and it has left gamers suspicious of anything less than a “9 out of 10”. I suspect that when most of us sit on the couch and turn on “The Ranch” or “Fuller House” that we’re not expecting to watch a classic; rather we expect something that’s a pleasant temporary diversion, and that we’re fine with that. When you find the fun, it doesn’t matter if a game is “amazing” or “just okay” because you’re enjoying your time, and that’s the only review score that actually counts.

Sorry, cannot agree with you on this. “Just ok” is really not good enough for me. Not when companies want my money, my time, and my bandwidth. I certainly would not knowingly accept ‘Just ok’ in other areas of my life. House, car, companion, etc. Why would I accept ‘Just ok’ in my entertainments.

Maybe ‘Just ok’ is good enough for some folks. I suspect that as far as columnists go, MOP would not be very happy with a ‘Just ok’ writer; they would want the best that they could get. You think?

“Just ok” means “suits the purpose” and taking into account modern day MMORPGs tend to be multi-faceted activities if a game provides enough means to have the playstyle one wants other factors not necessarily connected to game quality come into play. For example, I like Tera’s graphical style more than that of ESO. If Tera is “just ok” to have the playstyle I want right now I would choose it over ESO. Or maybe I have a friend which plays Tera. Or I just saw an advertisement for Tera and felt like playing. So “just ok” is not good enough until it’s good enough.

Except if you’re some very perfectionist type (in which case life is I guess super irritating for you) you can easily become one of those “folks” and be happy there’s a “just ok” game suiting some particular impulse at the moment.

Using your analogy with MOP, I come to MOP for comments, my priorities in MMOs are so different from MOP editors’ that the article content is “just ok”, even subpar in a way for me, but I’ve got some very useful recommendations and insights from the comments.

Well, if I was a perfectionist, I would not be playing MMOs. :)

That being said, if I purchase a game on Steam, and it is ‘Just ok’, it gets refunded immediately.

There are also a huge number of ‘Just ok’ MMOs (for me, of course) that I do not play, even though they do have some interesting points and a certain draw for me.

Bottom line for me is that ‘Just ok’ is simply not good enough for my money and time. I do respect other’s feelings that are different, though.

Praetoria is going to be pretty rough for grouping. If the readers are joining in, you might be able to get a full team going though.

Agreed. Praetoria has some good stories but its tough to get teams in.

Wonderful column. Last week I confessed to personally breaking the MMO genre by being a hardcore solo player and avoiding raids, I’ll now cop to also liking TERA because it is fun. What’s more, I played Destiny 2 before it split from Activision and OMG, I enjoyed it. Finally, I don’t play any version of Dark Souls because it’s not actually fun to die that much.

Put me down with being okay with enjoying games that are not on anyone’s ‘best of’ list.

I liked Tera too.
I love slinky outfits.
I loved the action combat.
I love Castanics and even more so ADORE Amani.

The storyline and the questing were awful. Awful. AWFUL.
and the magic item creating wasn’t very good either.

If I had all the moneys I’d buy Tera and make it an OK game.