If you saw the Warframe trailer ahead of the new Spider-Man movie, you caught a glimpse of the new cinematic created to introduce the game to players — but only a glimpse. The full movie-quality cinematic was unveiled on stage this evening at TennoCon 2019 to the cheers of fans. Director Dan Trachtenberg worked with Digital Extremes to create a re-imagining of Warframe’s origin story.

END_OF_DOCUMENT_TOKEN_TO_BE_REPLACED
Perhaps more important than Trachtenberg’s directorial resume (which includes 10 Cloverfield Lane, Black Mirror: Playtest, The Boys,  and Uncharted) is the fact that he is also a seasoned player, making him intimately familiar with the game, its lore, and its secrets. Those two skill sets combine to make an action-filled, movie-quality cinematic to share all that in a whole new way.

A new beginning in the past

Warframe may not have started with story, but it’s sure making up for that as the years progress. Between the powerful story missions and now this new intense six-minute cinematic, what folks might think is just a shoot and loot experience has grown to a deep universe with lore that ties it all together.

Filmed as a new player introduction to the game, it gives context to the game and showcases many aspects of Warframe that new players can expect, from the frames themselves and their powers to movement to lore. It takes viewer back to an earlier era — all the way back to the Old War in the Orkin Era. As proto-Grineer hunt down a lone survivor of the village they just destroyed, viewers are treated to three flashbacks where the original Warframes rebel against their Orokin masters and fight against Dax Warriors. Each flashback highlights one of the three frames that new players will select from when starting the game: Excalibur, Mag, and Volt. The idea is that this new intro will give new folks a better understanding of the Warframe universe and a taste of the more comprehensive storyline. 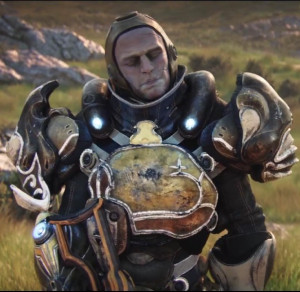 The studio plans to incorporate this new introduction in late 2019/early 2020. Why so far away? Game Director Steve Sinclair explained that the team is working on creating that swamp area and integrating more of that experience from the new opening trailer into the game. That might just include some new Mag powers. Fun fact: There was talk of enhancing up the action, but Trachtenberg didn’t want to deviate from who Mag actually was.

New players aren’t the only ones who get value from the cinematic, either. Sinclair emphasized that there are plenty of Easter eggs and lore hidden within that six minutes. He then joked about adding in Deluxe Moss Skins for those three warframes. Trachtenberg suggested that veterans might want to freeze-frame it to catch everything.

Having such a well-know director creating the cinematic, players might wonder whether there is a real movie in the works. Sadly, no, it was just one cinematic. Would Trachtenberg work with Digital Extremes again? He explained that he actually was the one who reached out to the studio and told them he was their man if they wanted to do anything movie-wise.  And now we know the result of that. Maybe, someday, there could be more. We can hope. Trachtenberg said,

“Getting to work so collaboratively with the dev team at DE has been an awesome experience. As a massive fan of the game myself, having logged in hundreds of hours of play time, it’s been so much fun crafting a story that both sets up the universe for new players in a pretty epic way, while sprinkling it with moments that, I hope, make it doubly rewarding for hardcore fans with a better understanding of the game’s lore.”

Disclosure: In accordance with Massively OP’s ethics policy, we must disclose that Digital Extremes funded our writer’s travel to and accommodation at this event. The studio has neither requested nor been granted any control or influence over our coverage.

Get caught up on all of our coverage of this year’s TennoCon!

I have always had trouble with the story narrative of Warframe. Part of that is probably due to me not playing it all the time but a lot of it comes down to how fragmented the story feels to me while I play.

Most of the time I just shoot things for reasons and the story such as it is washes over me rather than it being a focus.

Fortunately when I do play I enjoy the moment to moment game play of Warframe with the movement and shooting being really fluid and smooth. So I guess what ever the reason I play its all good but with story being the usual focus for me in games it just makes me feel a little disconnected sometimes.

Whether this will make a difference to any of that remains to be seen.

A lot of the connective lore you do have to actively hunt out, for example if players don’t keep track of Reddit or deep dive the wiki or explore the in-game Codex console they might never find out about all the scannable collectables which unlock images and text fragments and secret mouseover audio fragments, or the prose stories hidden away in ‘frame descriptions and behind Simaris synthesis challenges. In the recent Jovian Concord update the majority of the story context was hidden there!

This sounds like an important column idea! I will have to star researching where stuff all is too!

I’m a total completionist for that sort of collectable lore, so can put a list together and email it if you want? Sadly some bits are linked to Operations etc. so only available in-game for limited periods.

Probably won’t be as, ahem, controversial as the other column I provided info for!

This is great. I felt the game can be too arcade-y at times. Having a more dramatic narrative definitely helps. Nice to see developers that don’t just hold periodic events, but also enhance the game’s mechanics & model over time.

Beautiful, can’t wait to see how the new introductory mission experience will turn out :)

Though I hope they still keep the storyline about Vor and the Ascaris in the early game somewhere, as it has some nice bits and it’d be a shame to completely throw away old content. Maybe preserve it as a main quest but remove the tutorial and Orbiter module recovery aspects?

My biggest takeaway from the cinematic, as a veteran player, is the implication that the girl is a spoiler. I’m thinking that it does make sense to introduce the concept of spoilers to new players right from the start, as they’re being shown more and more in the game’s promotional material (e.g. the rewards trailer for the new Nightwave season) and also it feels like I’m seeing more and more people in missions using spoiler mode in front of low MR players who probably haven’t reached that point in the main storyline quests.

I was initially dubious about the idea of a full Warframe movie, given that ‘frames are mostly silent, but they could do it like the graphic novel which had Little Duck and the Ostron girl along for dialogue and exposition.

Spoiler or not, most people unfamiliar with that particular piece of the game will probably believe she was teleported away.

It’s honestly been awesome seeing this game grow so much.