For the second time, Digital Extremes left players hanging with teaser trailer at the end of TennoCon. This year, The shocker was The Duviri Paradox, a reality-bending, possibly time-twisting update that’s a part of Warframe’s future. It’s a peek at what comes after Empyrean. We know it is a large, open area in the same vein as Eidolon and Fortuna, but other than that we have little information about that update. What we do have is a few clues. Between the movie, what was said on stage, and the blurb press release, we can try to piece things together. Some speculation could turn out to be spot on.

END_OF_DOCUMENT_TOKEN_TO_BE_REPLACED
Please note: This rest of this piece contains spoilers. If you haven’t progressed in the story through The Second Dream, you may want to file this away to read later. (And by the way, get yourself through that and The War Within — it’s so very worth it!) 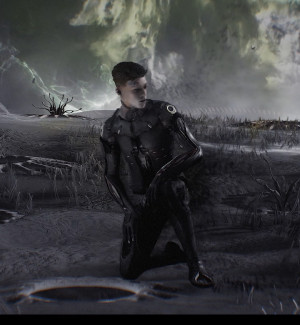 Time or reality shift? Or something else?

After the big trailer reveal, I was listening to speculation that the child seen placing the weapon in the ground was the younger self of the older man retrieving it. That definitely looks possible. The young figure even seemed to stare right at the adult as he lay there in dire straits, beckoning him to that spot to retrieve his salvation. Did he somehow see the future and know to do exactly that, and just forgot about it? Is this some Terminator tie-in?

I actually think there’s another explanation. The paradox is not time-based at all but rather dimension- or phase-based. Part of that is the clue from the press release, which called it specifically a “reality-bending journey of the surreal.” Reality was the description. As someone who used to love watching Sliders, I’d say the whole multiple dimensions thing is very easy to envision. And what about that original Star Trek episode where beings lived out of phase from the crew but in the same reality? Finding a way to be able to bend/speed up/slow reality or temporarily tear through dimensions seems right up an operator’s alley, no?

I believe this is further supported with another description: “with the third open world comprised of an ominous new environment where Operators have grown up to become mature adults.” It’s not far-fetched to think that other operators exist besides the ones that were found and rescued. These, however, have grown up, and could possibly be having difficulty with their void powers. Was it their age, or some suppressing power of the land or the enemy approaching? If it was the land…

Just look at that landscape! Was it monochrome with color bleeding in for trailer effect, or was that how it was? If that is how it is in that new open world area, could that indicate this was in the void, or on the edge of it? There is some evidence to point that way. Think back to the Empyrean demo when you saw that space giant worm creature go by as the railjack flew past. Now look again at that giant work creature at the beginning of this trailer that flies over the protagonist. They look pretty similar, don’t they? Does that reality/realm exist in the void? Was that another ship crashed in the void at the end with its crew, or could that be the original Zariman 10-0? Were there some adult survivors, or Tenno kids who weren’t rescued but left there and then grew up? Or is it someone lost in the void previously heading to aid the ship? It gets our mind working, doesn’t it?

And did the trailer just introduce a horse mount? Because that was one pretty sweet ride! There is so much potential there. I am really looking forward to both the learning more about and diving into the story and the gameplay of The Duviri Paradox.

There is some concern about how many spoilers Digital Extremes is unveiling this year. First there is the new player introduction cinematic, and now The Duviri Paradox. And it’s true: Both appear to profile Operators. But is it really a spoiler? Folks who know what the operator is of course know what specifically they are seeing; however, I counter that those who do not yet know are getting only foreshadowing, not a spoiler.

As a player who hadn’t finished those main story missions until recently, I can easily say I would not have taken those humanoids to be operators. And I even knew that “operators” existed – I just didn’t know what they were or how they worked. As I’ve mentioned previously, I was picturing more of some tiny alien or symbiote living inside the Warframes. My first reaction would be that this is an introduction of a new race Tenno will come into contact with. It makes sense as new areas open up that pockets of civilizations could have endured. Just look at what we learned with Fortuna.

So I don’t think DE is tossing out too many spoilers willy-nilly. I think these glimpses in the cinematic are very well done to be understood by those who know what is going on. Like any good foreshadowing, it gives hints at what is to come without the viewer knowing it is a hint. I think the only people who know they are spoilers are those who have already discovered the secret by completing The Second Dream and The War Within. It won’t be until after uncovering that secret that players who didn’t know will look back with a big aha moment. That may actually make the reveal later in the game that much more profound.

My big question is how will DE market this update after this point. They’d have to be really careful to provide information that would enlighten both those who already know the secret and those who don’t. I think it can be done, especially if the information is always provided in a way that can let players feel like those humanoids on the screen are just another race they will meet up and work with. Language like “Players will be helping this oppressed people” and “Players can guide the rescue” will go a long way in maintaining the secret. So you think your Warframe somehow comes to aid or protect these folks. Keep that ruse going. Carefully craft all language to allow for that exact belief, and those who are in on the secret will understand the deeper significance.

It can work. But for it to do so, we have to stop pointing out to people that something is a spoiler! This community has been the best I have ever seen at preserving the integrity of the secret and allowing new folks to have a pure, unspoiled experience. Don’t sow the seeds of spoileriness and make them start digging; let them remain blissfully unaware until the truth smacks them upside the head.

Disclosure: In accordance with Massively OP’s ethics policy, we must disclose that Digital Extremes funded our writer’s travel to and accommodation at this event. The studio has neither requested nor been granted any control or influence over our coverage.
Get caught up on all of our coverage of this year’s Tennocon!