In the wake of Black Desert’s Heidel Ball event last month, Pearl Abyss has dropped a set of player-submitted suggestions with dev answers to them, all focused on improving the game. There’s a lot to unpack here: The studio says it’s considering some additional character customization improvements, including hair but not face shapes; hiding sub-weapons is on the table; don’t expect changes to negative karma; new dream horses aren’t being developed; the Trade lifeskill is due for some love; and the studio’s looking at ways to bolster small guilds and tweak Node Wars, among a few dozen other topics.

Oh, and to be clear, there no plans for a male version of the Shai, so don’t get your hopes up there.

END_OF_DOCUMENT_TOKEN_TO_BE_REPLACED
Live in the PC edition of BDO today is the promised Altar of Blood game mode, where the goal is for players to protect a relic from monsters through waves and waves of baddies on each stage.

Meanwhile, over in BDO’s Xbox One version, the Ninja class has been deployed. But you can’t see him because he’s a Ninja! Just kidding, you can.

Can someone explain the end game of Black Desert? After watching a few videos it seems to be all about silver coins.

BDO is a very open ended game and your goals are largely of your own making.

For the basic experience, most people aim at improving their gear as much as possible. This requires an exponentially larger amount of money with each upgrade for very minimal gains. So there’s a lot of hub-bub about making silver and the various ways to go about it. There is also the Node Wars/Conquest Wars for PvP where guilds battle each other to take over territories in the game so gear naturally plays a big part there for the competitive players.

However there are other objectives as well in game. For example managing workers, contribution, housing, workshops, combat xp, skill xp, lifeskill levels, family fames, etc. There’s lots of different things to work on to build up over all. They’re also adding new content now for the higher end players who have a lot of their gear maxed out or near maxed out. An example is the recent Altar of Blood which has a leaderboard/scoreboard. There’s also big updates coming to things like crafting/lifeskills that NA/EU is waiting for them to release from KR so it’s not just combat stuff that gets those updates.

So over all it’s a pretty great game, if you can get over the fact that the KR developers see NA/EU region as nothing more than a cash cow to keep milking in some of the most predatory methods out there in gaming today all while ignoring us completely (:

From time to time, I get interested in trying BDO again, update and play for the evening, check out what’s new. Then I remember why I quit playing (refer to comments below) and log back into ESO/FFXIV/GW2..

Vunak said that BDO has so much potential. Korea is great at creating vivid worlds just not good at running them.

Haha I do the exact opposite. I’ll patch up GW2 or ESO and play for a night then remember why I quit and go back to playing BDO.

Called it on the Shai. Naming the class after the race was a clear giveaway.

By “addresses community concerns” it should be noted that these are all basically questions from Korea. They pretty much ignore the NA/EU audience entirely and pretty much only listen to KR concerns. Kakao repeatedly tells us they forward our complaints and issues to Pearl Abyss so this either means they’re lying or Pearl Abyss really doesn’t give a shit. Given the comments we see from other areas they manage (SEA, MENA, now Russia, etc) the later is far more likely.

Also there’s a lot of questions in there that are either obviously planted or just really obscure to answer. No one asks about the Merchant ring for example, it’s an item that would take on average over 60k hours to go after.

Very much agreed. I am about done with BDO. Its a shame because the game has SO MUCH potential. But PA is more concerned with RNG and the cash shop than actually creating great PvP and PvE mechanics.

As much as I have extreme displeasure for Pearl Abyss I’m loathe to give up BDO in the current MMO market. All the other MMOs are basically just WOW clones or uninteresting. It’s really bad. And really it’s not like their cash shops are much better. A game like ESO for example sells pretty much everything and the kitchen sink from account wide unlocks to RNG gamble boxes galore. I have hopes for Crowfall but nothing is guaranteed and it could just as easily end up being it’s own shit show in the end.

Karma system will never get reworked because, frankly speaking, it’s the best solution to the problem. There’s really no perfect solution, all have flaws. The current flaw is karma bombing. Most fixes to that just create other problems that encourage killing people more. That sounds good in theory, but there’s literally groups of people who do things like “Olvia Hunts” and just go hell camp noobs on Olvia channels with their vastly superior gear. People used to camp Chimeras and when a noob hit 45 they’d kill them. At game launch you had groups of people killing people to make them lose XP. These kinds of things are why the karma system was made even harsher actually despite all the complaints about the system.

Oh I know. I’ve been playing since launch. The problem with BDO is it is all grind, top end grind at that. The newest addition the altar of blood is a good example of them not really giving a shit about lower-mid grade players. Those players are stuck at Gahaz and Fogan for a year. There is no in between for people.

The balance passes they have been doing are decent, but they aren’t enough.

For a game that flaunts PvP as a large reason to play the game there really isn’t much in the way of actual PvP content. Karma could be reworked very easily to create a decent PvP environment. Since the closed betas people have been asking for the Lineage 2 system to handle Karma which was extremely well done but they just flat out refuse. The problem is there is literally no incentive to actually go negative karma except fk yourself in the long run.

The thing is the game doesn’t flaunt PvP at all. It never has. Anyone who goes around saying BDO is a PvP game is delusional. It’s basically 99% PvE game with the occasional spattering of PvP.

Top end heavy a problem they’re never going to address because it doesn’t advantage them to address it. Progression is good. Progression keeps people going. Progression pushes the cash shop. The issue they have is when people get progression and start hitting those PENs how do they keep those players? That’s why they’re focusing on high end PvE content right now for those players to give them something to do and something to struggle on.

They directly answered the Lineage2 karma system and said they tried something similar and it led to too much killing. There was a whole FAQ addressing it at game launch and is still around on the original forums. Essentially they have stated a commitment to both PvE and PvP play styles. Their view is people shouldn’t want to go negative karma, it isn’t meant to be a viable play style, it’s meant to be a punishment system and nothing more. At the same time they want to offer that option, as bad as it is, to people who like PvP. It’s very silly policy when you get down to it and they really should choose one way or another but instead they just adamantly stick to it.

Lol, no thanks. I don’t want this game becoming a toxic, griefers paradise, shithole like AA.

BDO is already a hell of a lot more toxic than AA ever was. With all the POS Karma Bombers out there. 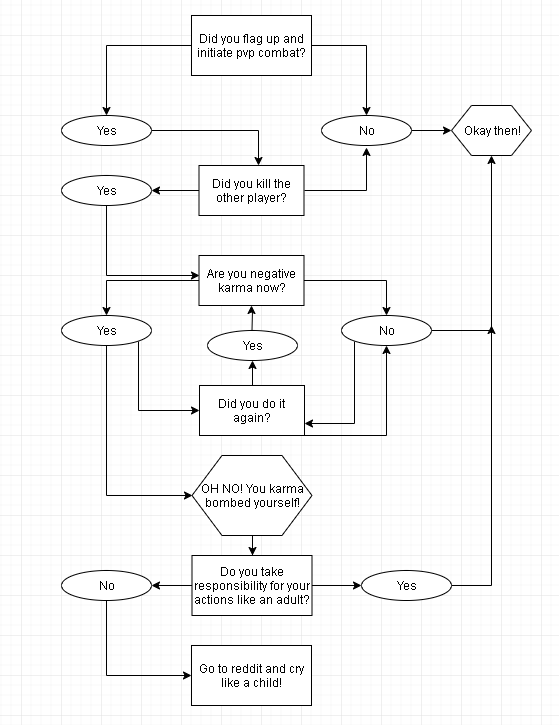 Having been in both worlds & language, can I just say that the Korean & SEA feedback forum are much clearer and structured than NA… The NA “feedback” space is just like a typical Western gaming forum – full of negativity, accusations, snide comments, name callings, and even death threats.

Just being in a Western comment section is a culture shock for many Asians.

Of course PA will prioritize its Asian playerbase. At least it’s clear what the players want and, in the case of BDO, there are more players in Asia combined.

I don’t really buy that line of reasoning when it comes to feedback.

Kakao’s job as a publisher for Pearl Abyss is basically to act as a middleman between us and Pearl Abyss. It’s literally their job to translate our toxic methods of communication into usable feedback for Pearl Abyss. They tell us they do this and that they communicate the community’s feedback to Pearl Abyss. Yet we rarely see the issues we’re actually concerned about or the things we desire about the game addressed. So this leads to one of two conclusions:

1. Kakao is lying to us and doesn’t do anything. They’re just useless sacks of shit who collect a middleman fee while being the punching bag for our toxicity.

2. They are passing along our feedback and Pearl Abyss has a printer for it setup to feed directly into a Shredder.

Oh, and there aren’t more players in Asia combined with SEA and KR and JP even. NA/EU makes up the lion’s share of profit for BDO PC. You can see this in any quarterly report PA puts out on it’s financials.

Instead of adding a simple yet fun horde defense mode they’ve added this Blood Altar stuff with instruction taking 9 screens (!) in patch notes.

No wonder there isn’t any hype around it even though the game is in dire need of an entertaining group PvE content.