Now that I’m helming Not So Massively, I feel a stronger compulsion to delve into games like ARPGs and shooters so that I can speak with more authority in this column. Luckily enough, Steam held a free weekend for Crate Entertainment‘s ARPG Grim Dawn a few weeks back, providing me the perfect opportunity to expand my knowledge of the ARPG genre.

Grim Dawn hadn’t really caught my eye previous to then, but I had a good enough time during the free weekend, so I decided to pick up the game and its expansions during the accompanying sale.

I was unsure how to discuss Grim Dawn, given it’s been out for a while. Should I deliver my thoughts after finishing the base game and write about the expansions separately or not at all, or finish everything and talk about it all at once?

I’ve decided to go with the former, for reasons I will explain soon. For now I’ll say that as of this writing I’ve finished the base game and gotten as far as the first quest hub in Ashes of Malmouth.

The game takes place in a post-apocalyptic fantasy world where humanity has been devastated by an invasion of mystical spirits known as Aetherials. By possessing key leadership figures, the Aetherials were able to bring human civilization to its knees virtually overnight, and this event became known as the Grim Dawn by those few who survived. 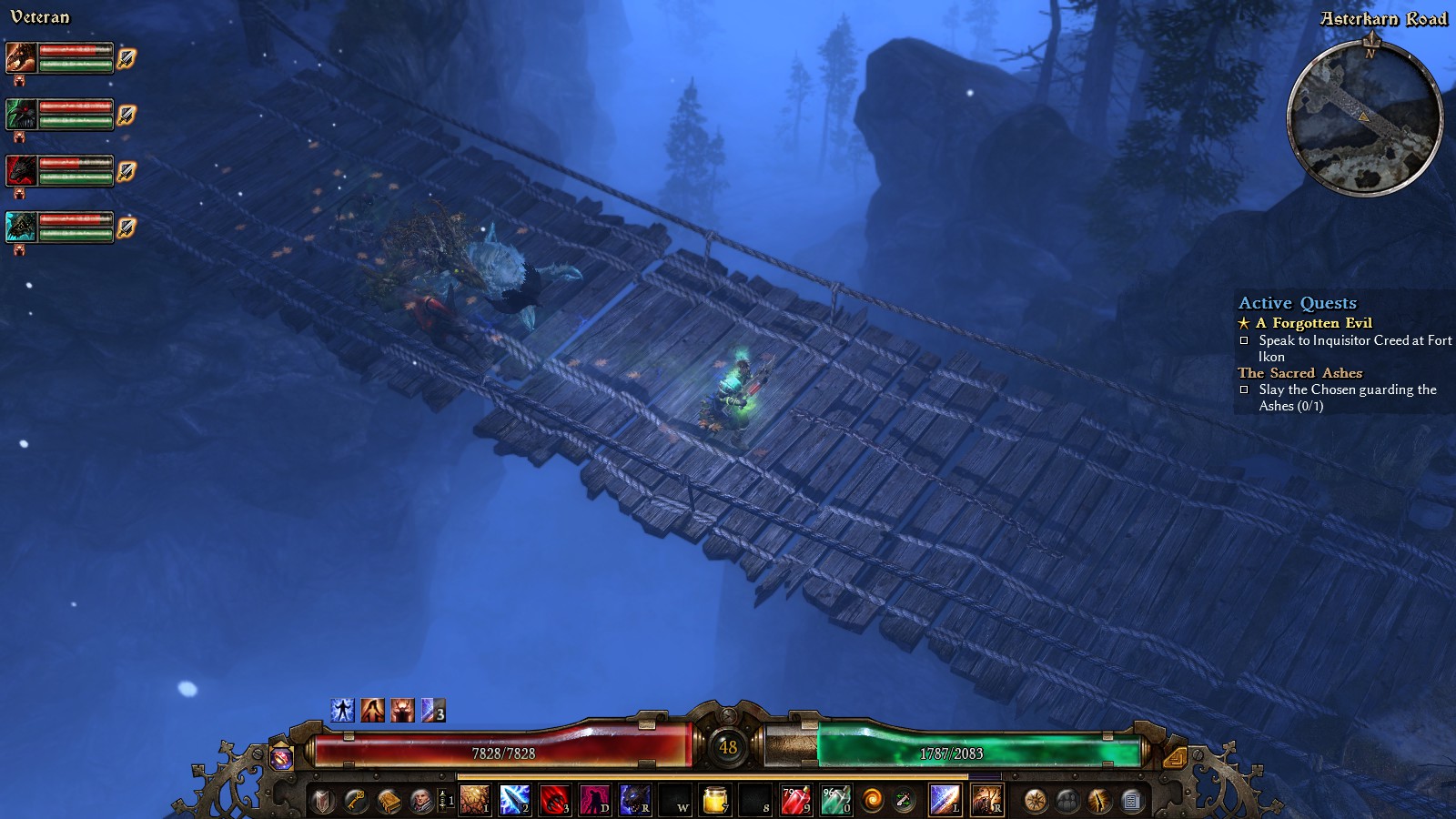 Grim Dawn is a great example of the difference between story and lore. On the one hand, I love the setting of Grim Dawn. It’s this great mash-up of Victorian England, light steampunk elements, traditional fantasy, and Gothic horror. None of the individual elements of the setting is that original, but the way they’re combined is very unique and richly fascinating. I’d happily read novels in this setting.

The ambiance is greatly enhanced by the occasional lore note (often very well-written and deeply disturbing), a pleasantly gritty art style, and some truly lovely music.

So Grim Dawn has great lore. The actual story, though — the plot — leaves much to be desired. It just sort of rambles from one event to the other without any particular narrative thread connecting it all, and none of the characters is terribly memorable. Most of the dialogue isn’t even voiced, and what voice acting does appear is among the worst I’ve ever heard.

The game’s build system is a similarly mixed bag. I both love and hate it.

Grim Dawn is built on the same engine as Titan Quest, and it uses exactly the same build system. You can combine two different classes, giving you access to the skill trees of both. A lot of the classes are pretty unusual or interesting on their own, and the ability to mix and match them makes for some really fun build options.

I mainly played a conjurer (shaman/occultist), which works out to a dark-themed nature class with several fairly strong pets. I tried a number of alts, but the only one I particularly liked was a purifier (inquisitor/demolitionist), a bomb-throwing gunslinger. 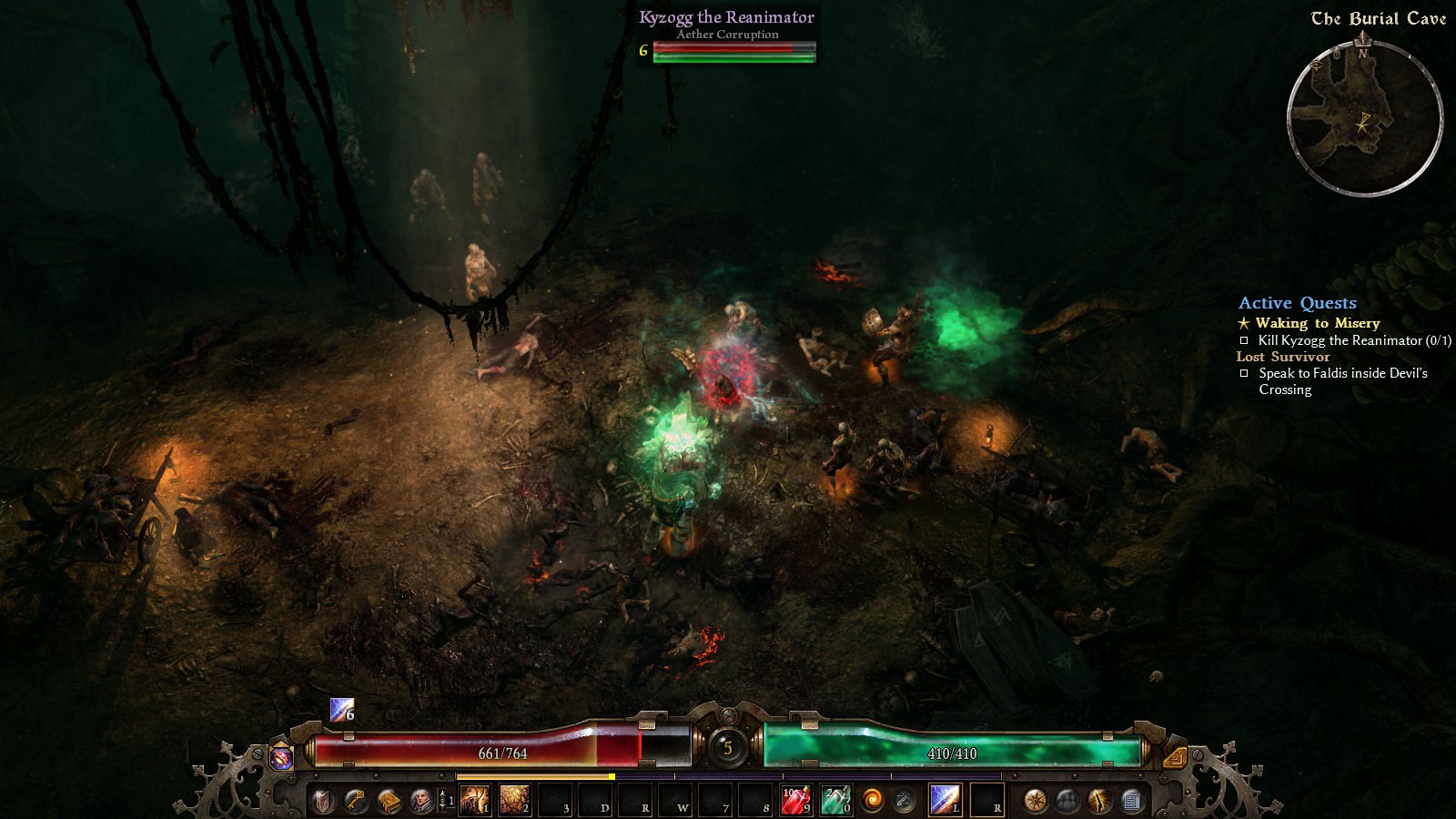 However, it’s one of those old school systems where you feel constantly starved for skill points. Each skill needs to be leveled up once unlocked, and most require a dozen or more skill points to max out.

Making matters worse, you also need to level up your skill tree itself to unlock new abilities, and for some incomprehensible reason skill points spent on skills don’t count towards this. You need to spend skill points to level up the tree itself. You get some stat boosts for doing so, but to say that this is unexciting is an understatement. It’s pure gating, and it really sucks the fun out of what could otherwise be a really exciting build system.

Of course, leveling gets slower as you advance through the game, and once you get past the original level cap the number of skill points you get per level starts going down, too. It’s such a drag. The low levels are very fun, but the game just starts to feel so miserly after a while.

I suppose the “correct” way to play is to only pick a very small number of skills and focus on maxing them out, but that just seems boring to me, and it really works against the depth of the build system.

As an aside, tooltips in this game are a nightmare. Every ability has about five different effects, and that’s before you start adding other passives and upgrades from elsewhere in the skill tree. On top of that, most skills also dump a full paragraph of lore on you. I’m all for flavor text, but this is extreme. It’s information overload all of the time, and it spills over to gear, too, which brings me to my next point.

Further contributing to how unrewarding the game feels is the fact that loot in Grim Dawn is awful. There are so many stats — most of them terribly dry and arcane — and no kind of bad luck protection whatsoever. I’m not sure I’ve ever had a single piece of gear in this game — past the first few levels, anyway — that didn’t have at least one totally worthless stat on it. 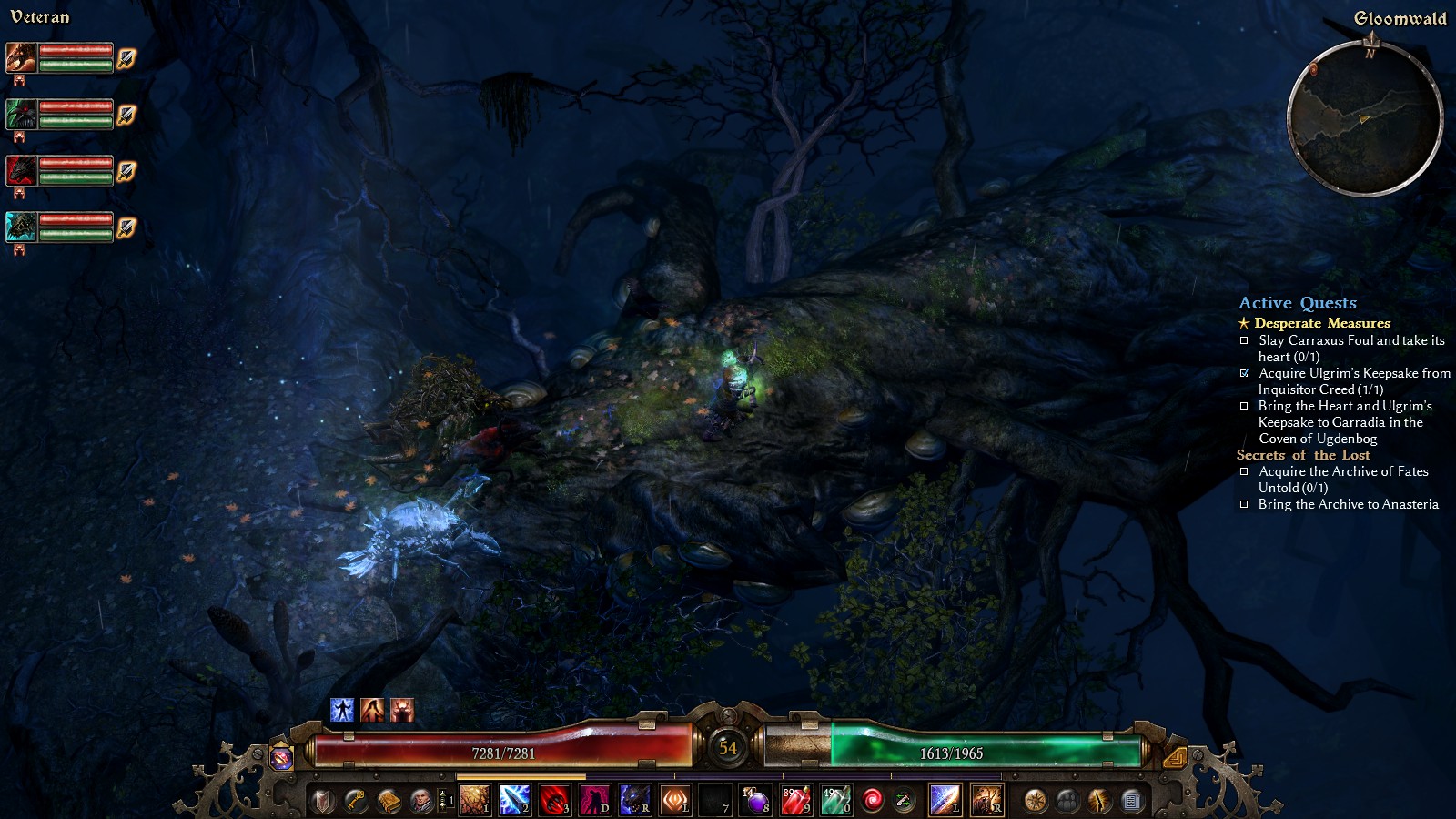 It’s not that useful gear doesn’t exist. It’s just that between the wealth of build options, the dizzying variety of potential gear bonuses, and the total uncontrolled randomness of drops the odds of actually getting something truly good for your build are infinitesimal. I’ve gotten lots of good gear, but very little of it good for me. I’ve got a complete set of awesome oathkeeper gear sitting in my stash, which would be great if I actually played an oathkeeper.

Of course half the problem is that it’s so hard to figure out what gear is useful in the first place. Which is better: a direct increase to bleed damage, an increase to a core stat that buffs many things including bleed damage, or an increase to the skill that’s applying the bleed in the first place? There’s no practical way for the average player to figure that out short of just looking up a guide, and any time you need a guide just to figure out basic things like whether a drop is an upgrade or not, it’s a failure of game design.

So between the bad drops and the lack of skill points, Grim Dawn feels like a tremendously unrewarding game, and without a strong narrative to keep me going, I feel my interest starting to stall. I’m not really sure if I want to finish the expansions or not.

One last thing I want to note is how hard Grim Dawn makes it to play multiplayer with friends. If you own any expansion, you can’t play with anyone who doesn’t also own that expansion. If you own one expansion and your friend owns both, you still can’t play together. I was considering trying to sell a gamer friend on Grim Dawn so we could play together, but I’m not asking her to buy two expansions off the bat just to play with me. This seems like an unnecessarily large barrier to entry.

On the upside, I did have a lot of fun already — Steam shows around 40 hours played, and most of that time was a good ride. It’s just a shame there’s so many rough edges to deal with.