“Traveling the realms is no task for the meek. The underprepared. The easily overwhelmed. The challenges you face and the hardships you have to fight against are beyond the most advanced understanding of the word ‘daunting.’ Doing this will kill you. Full stop. Lucky for me, I’ve done this long enough and gotten near enough to that brink where it’s a lot like walking down the street… albeit an extremely weird street.

My name was Allison Raynor, and a long time ago, I was a boxer in training until fate saw fit to grant me a new ring to fight in: the cosmic struggle of opposing forces to maintain the multiversal balance. I link mystic power with melee skill because this job need dirty knuckles and broken noses. I am a sorcerous angel. A temporal samurai. The Magician Magnificent. I am Witchfist.” 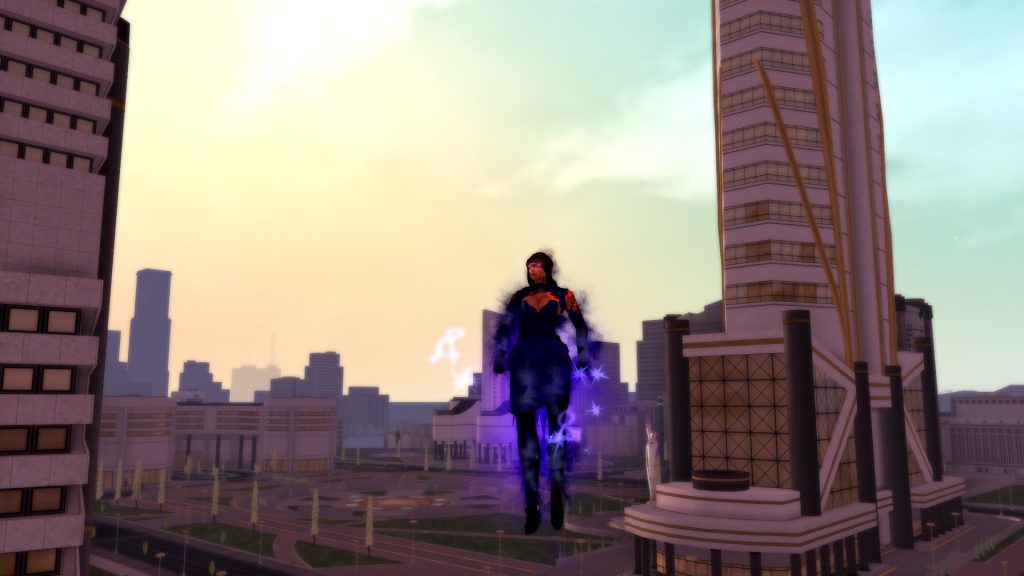 Perhaps unsurprisingly, the advice of most of the City of Heroes-playing public given to me last week when I struggled with my Mastermind was “fix the problem with alts.” It’s a tried and true solution to a great many things in this game, so I was both unsurprised and relieved when the votes rolled in to drop the Mastermind and roll up something different. And different she is; Witchfist is a Street Justice/Dark Brute that came together over the course of character creation when I sought to both mitigate the difficulties of Going Rogue and make an interesting-to-play character. The powerset combination was chosen in large part thanks to you fine commenters who provided some excellent insight and thought on what to do to prepare myself. The fact that she’s a character in her own right is a sort of happy accident.

The differences between this Brute and the old Mastermind were night and day. Not only was I arriving to Praetoria with more forward knowledge of what to expect, but I feel like I’ve built a character that can better stand up to the rigors of the nonsense Going Rogue likes to throw at you from the jump. She seems to mitigate the damage enemies dish out better, she has a whole lot more damage output than those idiotic robots do at the same level, and I’m not falling nearly asleep playing as her since I have to be active.

Also, did I mention she takes things out nice and fast? Boy is it different. 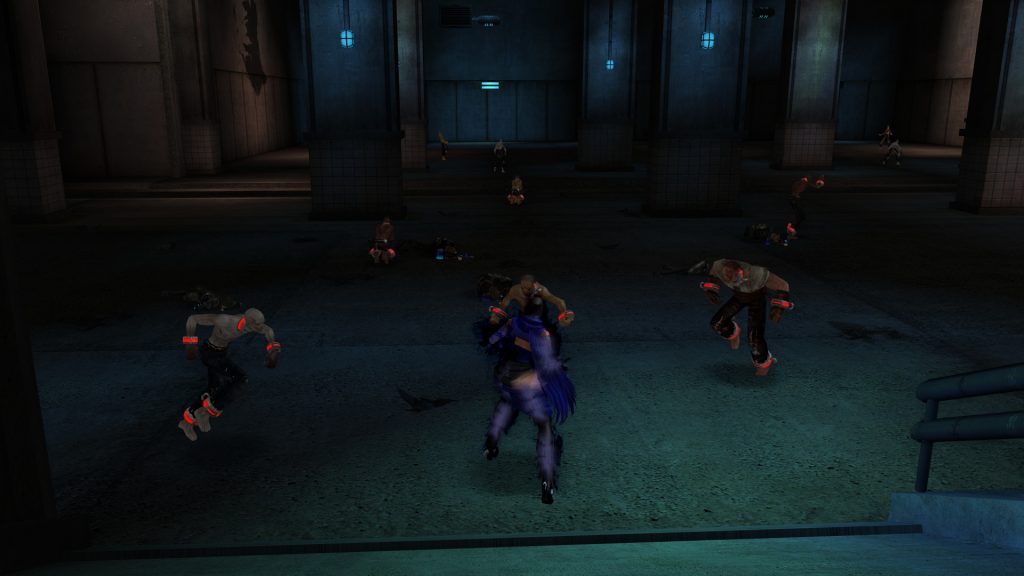 I had almost forgotten how much fun Brutes are in this game. It’s like someone decided to make the Tanker archetype actually fun again, and the brutality of the Street Justice moves is pretty satisfying. On top of that, there’s a chance that my strikes will either make my foes dizzy or send them flying nonsensically up in the air, meaning I can pile on the pressure. The rotation seems easy enough, with the prime crux of the powerset revolving around building up Combo Points to unleash a boosted finishing maneuver, and mercifully, the impact of the finishing maneuver I have now is satisfying from both a visual and gameplay standpoint. Seriously, MMO devs, one-shotting an enemy now and again feels good. Let us have that more often, please.

Of course, meting out punishment is nothing if I can’t take the same, and the Dark secondary appears to have most of the bigger bases covered in Going Rogue, at least in the interim. One of the comments mentioned that psiconic damage was a pretty prevalent thing in the game, and so I sought to focus on halting those effects as much as possible, along with the usual energy and physical damage mitigation, and while I worry about the lack of defense against knockback effects, I figure being able to smash and punch foes in swift order is enough of a bulwark against that die. 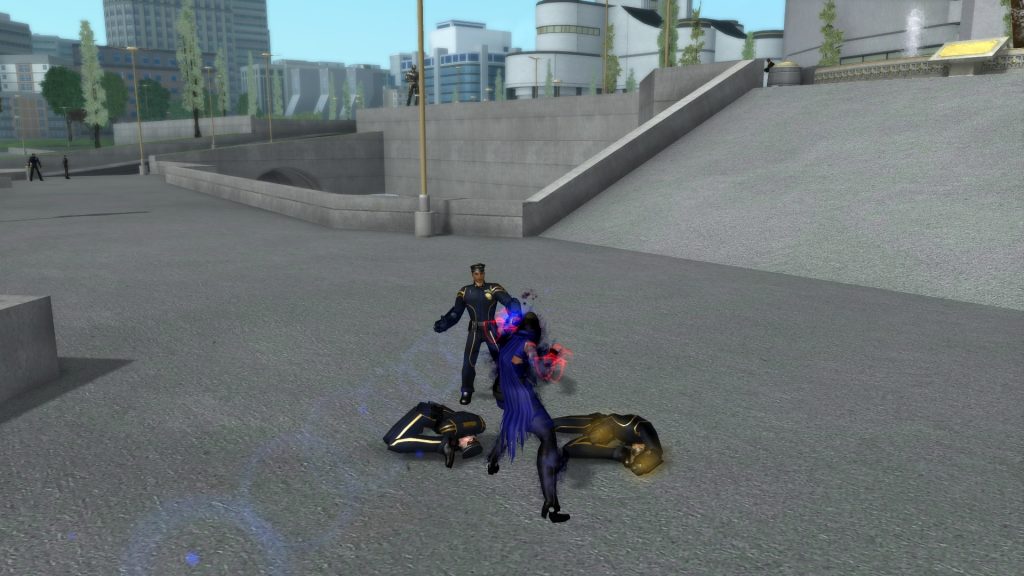 The Brute playstyle and powerset I’ve put together appears to have infected me a bit too deeply, if I’m honest. I recall one of the comments previously mentioning that the storylines in Going Rogue were some of the better ones in the whole of City of Heroes, but I was just so enamored with being a character that could cut through things again, I was blitzing past paragraphs of quest text without even thinking about it.

Going to my next contact, I think I have the general gist of where things are narratively speaking — it’s not like City of Heroes has astonishingly deep lore, at least in what’s immediately visible to newbies — but at the same time I’m open to some suggestions on how to press on with our City of Heroes adventure. And so that leads us right to today’s polls.

This is a simple one, but it’s an important one to ask, especially in deference to the old veterans of the game. As I mentioned before, my five-odd years of playing City of Heroes revolved around almost exclusively playing the red side or blue side, using the features of Going Rogue as a means to blip between zones without issue or to play with (and summarily be disappointed by) the Dual Pistols powerset. So with that in mind, I’m curious to know what you think is the best course of action for taking in this expansion’s content: Should I smash through as fast as possible until I’m back in Paragon again, or do I take my time and nibble on those succulent story leaves?

How should I proceed in our Going Rogue playthrough?

Second is the question of playing with other people. I think I’ve played solo long enough, and so I’d like to try to get some team action in where and how I can. The question, of course, is whether or not being in Praetoria — a part of the game that seems to be generally avoided by a lot of groups and power-players — is worth the effort of trying to find other people to be with. I’ve seen one or two folks milling about the city, sure, but it is alarmingly barren compared to the lowbie zones of Paragon City itself.

So, how should I go about finding group stuff to do, if I do so at all?

How should I look for a group? 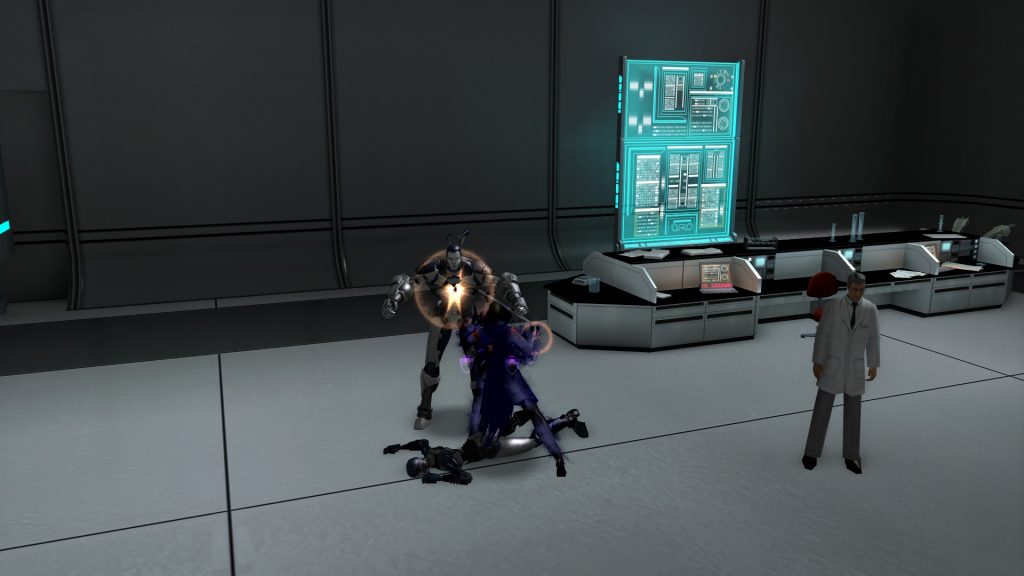 As per usual, polling will wrap up at 1:00 p.m. EDT this Friday, July 26th. And if you happen to be among those voting to find a party outside of the game, feel free to look my character up in the Everlasting server of Homecoming. Until there, I’ve looking forward to mystically whaling away on enemies very soon.

Umm so you are skipping quest text and then complaining CoH does not have particularly deep lore. Generally when you skip reading things, literally any game tends to be lacking in the lore department.

Are you sure you played CoH for 5 years? I just recently went through Going Rogue with a baby time/robots MM and I found it a breeze, even though I fall into the distinctly average gamer category. I suppose having played through Praetoria a few times gives me an edge though, I dont see the content there as that much more difficult than the base game. In fact, I find the enemies there a lot easier than the Vahzilok and their face melting vomit.

PSA: Feeling lonely in Praetoria? You don’t have to be! You can invite both heroes and villains to your team – they can travel to Praetoria via TUNNEL portals in, among others, Atlas Park and Mercy Island zones.

Going rogue has some of the best story lines and zones in the game.

However, one of the main flaws with CoX is its system for grouping for story missions. Its very simple to jump in any group for a random newspaper/radio mission, but with going rogue, its just a pain.

1. You have to be on a character that starts in the 1-20 going rogue zones
2. You kinda need to be playing the same “alignment” in the storyline
3. Not actually being on the same story/mission chain can actually lock you out of going certain places.
4. If you arent the character with the mission, you miss out on all the story dialog

Ultimately, unless you start going rogue with someone, you are probably going to have to solo it… and its slightly more challenging content than the normal game is at this level range. Pick the wrong ArchType, and you will be struggling. I played through it on a Dominator, and it was a huge slog fest.

Its one of the few things I wish CoX had managed to make more intuitive before it had shut down, but never did.

I realize that it’s a lonely slog gold-side these days, but since you’re there, I wouldn’t pass up the chance to enjoy some great content. And honestly, having a lot of that backstory does add context to a lot of the newer end-game plot once you hit 50. Belladona Vetrano, Number Six, Provost Marchand, and even some parts of the awesome Dark Astoria Incarnate mega-arc — all are made richer by the stuff you learn in that 1-20 push in Praetoria. :)

I believe the “problem” with gold side is that it has so many story paths, it’s bloody difficult to get a group going. And even if you manage to do that, more people = more XP = contacts outleveled more quickly.

Therefore I voted for “keep going” and “don’t bother with teams” :P

Brute is a indeed a cool AT but I have to finger waggle a bit about your Tanker comment! Tankers are quite fun indeed, even if not as dynamic as Brutes or Scrappers! Tankers tend to be more methodical as they have better mitigation values (higher caps from the AT and higher base values from defense being primary), but don’t do as much damage of course; espeially as they lack Scrapper criticals and Brute’s fury.

My one issue with Brute is that you don’t want to stop as you never want that fury bar to drop but sometimes you just gotta! At early levels you can suffer from lack of endurance when maintaining such a frenetic pace. I kept a lot of blue pills on my Tankers, Scrappers, and my Brutes as well unless I had end abilities in my main 2 power sets.