END_OF_DOCUMENT_TOKEN_TO_BE_REPLACED
Earlier this week, we ran a Leaderboard poll about whether you’d wear gaming apparel – not just stuff with logos, but stuff that actually looked like armor from the MMOs you play. It was inspired wholly by Guild Wars 2, whose studio ArenaNet had teased a collab with Wild Bangarang that appeared to show in-game armor skinned onto real-life dresses. And now that promotion has officially been announced – and it’s more than just dresses and armor:

“Celebrated games developer ArenaNet and active clothing retailer Wild Bangarang are pleased to announce a new partnership to produce and distribute licensed Guild Wars 2 clothing to fans across Europe, North America and Australia. The partnership begins with a new clothing line consisting of leggings and dresses featuring iconic Guild Wars 2 designs based on the fantasy franchise’s different races, armour and art. Prices start at £35 / €38.90 and all products will be available to order from Friday, 26th July via wildbangarang.com.”

According to the poll we ran, our readers weren’t opposed to the idea: 15% said they were all in, 23% said they’d prefer other gaming-branded wearables, 28% wanted to see more, and 19% said they weren’t into branded stuff at all. 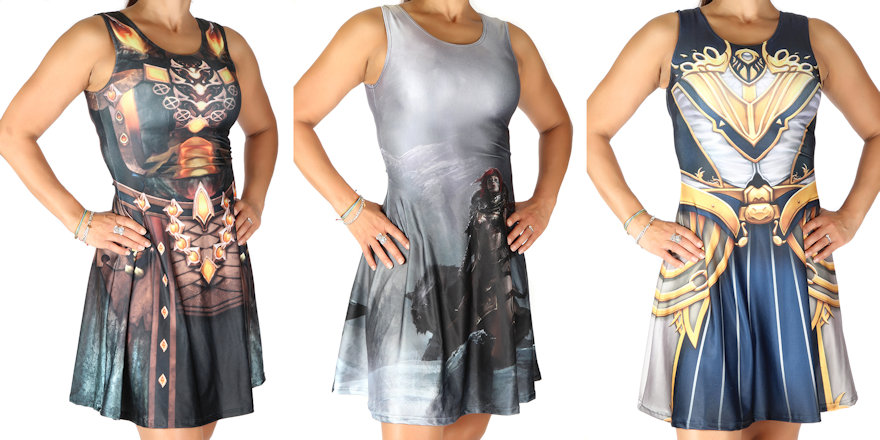 The armor patterns on those dresses look very ridiculous. The one with Eir on it looks decent though.

The Eir Stegalkin dress with Keyart leggings would make a nice combination.
I would have liked one of those Starter Area blue miniskirts that my Mesmer wore. I still like to wear that all this time later.

Looks great but I’m not a brave enough man to wear a dress.

You must not be Scottish

The comments on this article and the poll… a whole lot of guys who aren’t going to buy crop tops, leggings, and dresses. Well, I for one am shocked at this strange twist of fate. Shocked I say!

I’m not really certain about GW2 versions being successful… the whole point of Fashion Wars 2 is no one wears stock armor. It’s all dyed. Still, I like a few of the standard patterns, so I’ll check out the GW2 ones when they come out.

Cool idea. I can see something like this taking off.

Wake me up when Blade and Soul get in on the action.

…i’ll show myself out.

Well I’m sure this will spice up some one’s sex life perhaps.

You walk into the club with that on and people know you mean business.

As in “guaranteed that guy pays for it”?

Drake’s Odds: Survive is a multiplayer survival sandbox where you’re an...