END_OF_DOCUMENT_TOKEN_TO_BE_REPLACED
On Saturday, president of ZeniMax Online Studios Matt Firor and creative director of The Elder Scrolls Online Rich Lambert took the stage at Quakecon 2019 for a panel during which we were treated to both a review of some pivotal moments in ESO’s history and some hints of what to expect in the coming months.

Learning from the past

The afternoon started with a recap of some of the decisions made during the initial development of ESO. Matt Firor reminded the audience that The Elder Scrolls IV: Oblivion had been out only for a year when the planning for ESO began. Thus, many of the design decisions for ESO were originally based on Oblivion.

However, once Skyrim released in 2012, during the heart of coding and development for ESO, ZeniMax noted the enormous success of the title and anticipated a shift in player expectations, deciding to re-work much of the game to better match the style of The Elder Scrolls V. In fact, the number of changes made to ESO during that time frame might well be considered a complete overhaul. The inclusion of the compass, the ability to play the game in first person, and full voice-over of NPCs were given as examples of the change in direction. Without Skyrim’s success, ESO might have been a very different game.

Despite the team’s ability to pivot prior to launch, it received additional criticism from players once ESO went into full launch in 2014, as readers of MassivelyOP and its predecessor will surely recall.

One of the initial design goals was for player decisions to have a permanent effect on the world of Tamriel. Unfortunately, the type of world phasing required for these types of lasting impacts created barriers to playing the game with friends – one of the main selling points of MMOs. Anybody who played during those early months probably remembers grouping with a friend to help with a quest, only to find a group indicator icon running around where the friend’s character should have been. While a changing world was a major theme for single-player TES games, it soon became apparent that the challenges this posed to team play within ESO would be too much to overcome. The idea of a changing world was scrapped and re-worked to allow group play to be possible in most situations. 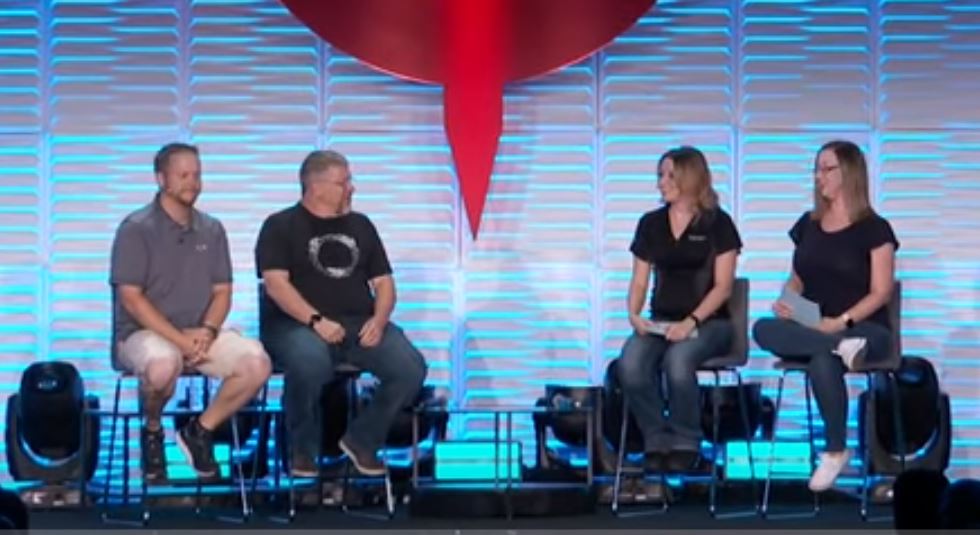 The panel next discussed the theory behind the now-entrenched quarterly update cadence. After some initial observations, ZOS noted that the number of ESO players tended to spike at new content releases, and then slowly decrease as the new content was completed. They did not return until fresh content was available. In order to stabilize the ebb and flow, ZOS made the decision to release updates on a quarterly cycle. Three months seemed like a reasonable time for content completion without waiting too long between releases. Certainly, it seems like a sweet spot between the overly ambitious two-week cycle attempted by Guild Wars 2 initially and the two-year (or more) cycle used by some other major MMOs.

Interestingly, one of the game’s biggest selling points (and most innovative systems) came about somewhat by accident. Firor recalled much conversation around the release of the game’s first DLC, Orsinium. The disagreements surrounded the level Orsinium should developed to. Maximum level would limit the content to only the most seasoned players. Minimum level would render the content too easy for everybody except the newest of the new.

Consequently, the team settled on creating a DLC that would be suitable and playable for players at any level. To do this, it borrowed from the tech already available in Cyrodiil PvP. The result was an experience that excluded nobody and allowed players to group with friends of any level. The success of this endeavor led to the most ambitious single overhaul of the game to date: You know it as the level-scaling features of One Tamriel, an update that brought many new features to ESO, including a complete rewrite of each and every zone in the game to incorporate the same content-leveling technology used in Orsinium. The result of this update was the removal of many of the faction and level-based restrictions that had been present since the launch of the game, setting the stage for the open-world game we play today.

Next, Firor and Lambert discussed future plans for ESO. We learned that the next dungeon-based DLC (Scalebreaker) will release on August 12th for PC/Mac and August 27th for consoles. Scalebreaker will include two new dungeons and the return of NPC favorite Sai Sahan. Click to reveal minor spoiler

No word yet on, y’know, how Sai Sahan returns for some of you heartless beings.

The Q4 update is called Dragonhold and will include the landscape of Southern Elsweyr. Size-wise, it will rival Murkmire and focus on the lore of the dragonguard. Dragonhold will be the culmination of the year-long season of the dragon story arc, which began with the Wrathstone update in the first quarter of this year.

The group finder and combat abilities

Besides the new content, some long-awaited improvements are scheduled to be unveiled with Dragonhold. First off, if you’ve attempted to access the dungeon finder during undaunted or PvP events, you’ll be painfully aware of the current issues facing players. Someone declined the invite, but hey, at least we’ve been moved to the front of the queue, right? The good news is that ZOS is equally aware of the issue and has decided to completely rebuild the group finder. It’s a fairly large undertaking, so hopefully the studio can find as much success as it did with the One Tamriel re-write.

Lastly, character combat abilities are being assessed from the perspective of server and client impact. Lambert made it clear that this assessment is not for the purposes of balance improvements. The sole purpose of this audit is to evaluate whether ability tweaks can reduce client/server loads, improving game performance for everybody.

Improving performance is a theme that carries into the first quarter update of 2020. In update 25, ZOS will continue to make character combat ability improvements for the purposes of server optimization. It’ll be removing old assets from the game that are no longer used or have been superseded. The patching system will be completely overhauled, the long-term result of which will be smaller patch downloads and quicker patching.

Unfortunately, this also means that the entire game will need to be re-downloaded for update 25, so plan your playtime accordingly! The goal of these numerous back-end updates is better frame rate, improved server response, and decreased time on load screens.

Viewed as a whole, the carefully orchestrated question/answer session seemed to be saying “We’ve revamped entire systems in the past based on feedback, and it worked out for the best. Hang with us for the next few updates while we do the same to address some of the most glaring problems facing players today.”

It was interesting to hear the history behind some of the decisions with the largest impact on The Elder Scrolls Online. It was also good to hear the studio’s addressing some of the things we’ve been providing feedback on recently. ZOS has promised a website post this week providing more information on the performance improvements. Personally, I’m looking forward to hearing more updates describing the changes in greater detail!