When an MMORPG recedes into the rearview mirror of life, all you are left with are memories, music… and screenshots. It’s amazing how a virtual photo album of past exploits can take us back to our favorite adventuring days of yore.

Vincent kicks off the One Shots Nostalgia Tour ’19 with this picture from Final Fantasy XIV. “Here’s a blast from the past from Heavensward (even then I couldn’t stick to one race/sex),” he said.

Smile while you can, little Lalafel, because those floating islands are going to come crashing down sooner or later — and nobody will be listening to your Chicken Little impressions. 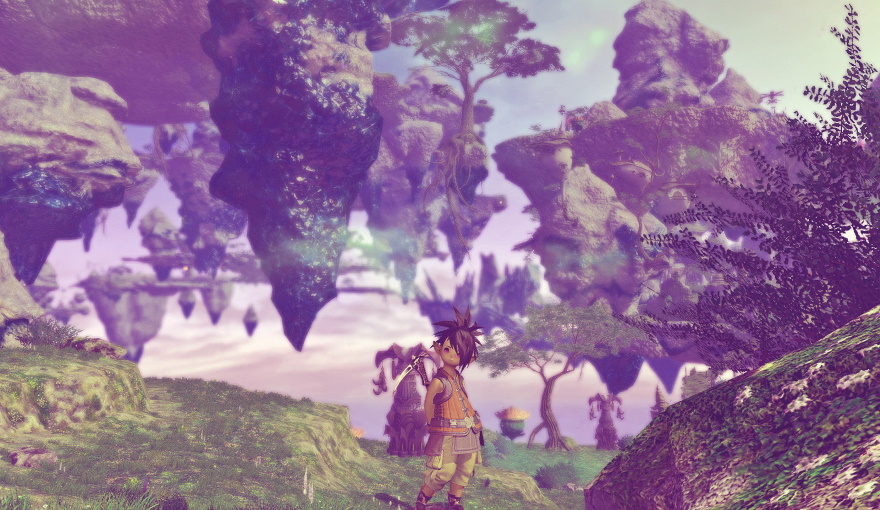 “I promised our Massively pal, Deekay, that I’d give him a look at how my Pike-era starship and crew were coming along in Star Trek Online,” said Mysecretid. “So here’s an early look at an away team. This isn’t the entire command crew of the USS Endurant (NCC 1715), deekay, merely the folks I beamed down to a mission recently.”

We regret to inform you that out of the five, two have become “space paste,” one got involved in a deadly love triangle, and the other two went irrevocably insane. Starfleet medical doesn’t cover any of that, by the way. 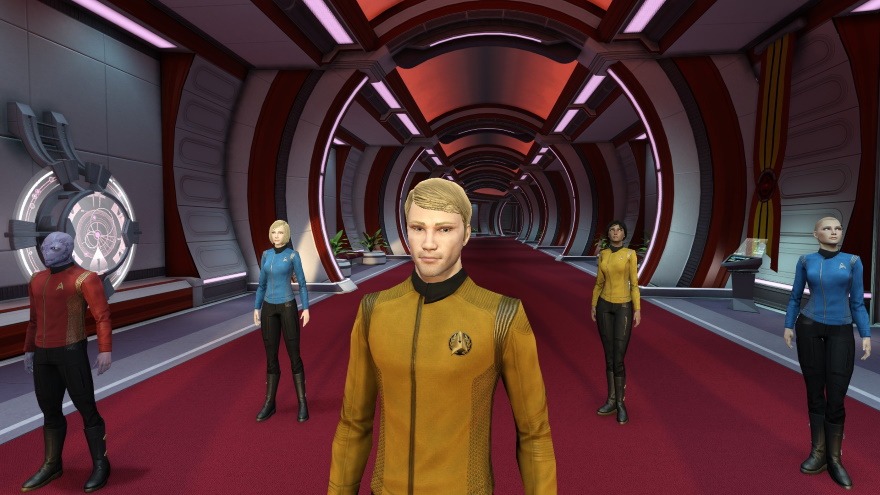 Rafael took us back to… Section X in Star Wars: The Old Republic? Huh! What is this madness!

“What this cap evokes is all the fun I had during those early SWTOR days,” he said. “Everything about the game, back then, appealed to MMORPG sensibilities. I was a member of a strong guild. Group content was a blast with guildies. Leveling was enjoyable solo and I was working my way through all of the individual class stories for both the Empire and the Republic. And the graphics and art style were just the right mix to ensure the game ran as smooth as silk on my system. Despite the naysayers, the game was an incredible experience and had great potential. I loved it and this cap reminds me of those times.” 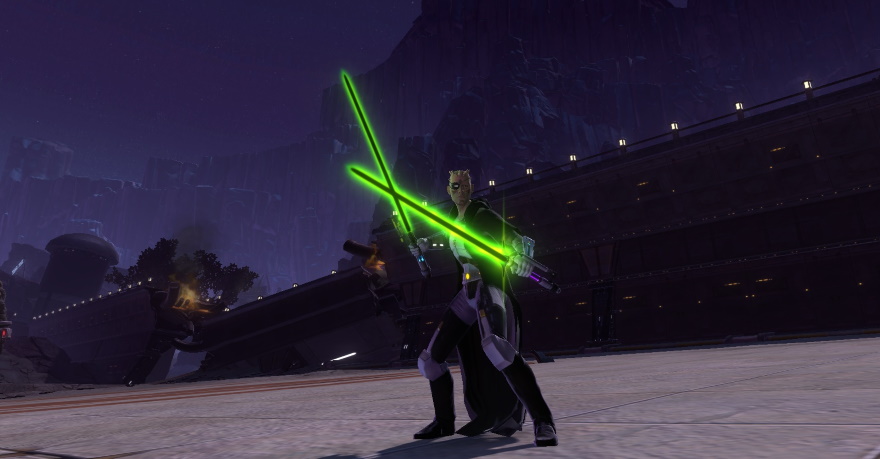 Sometimes nostalgia is as simple as playing a little tune in a field for only the Lord of the Rings Online bunnies and shrews to hear. They don’t appreciate being woken up before seven in the morning, but as they’re not unionized, they don’t have a say in how things are run in the Shire. 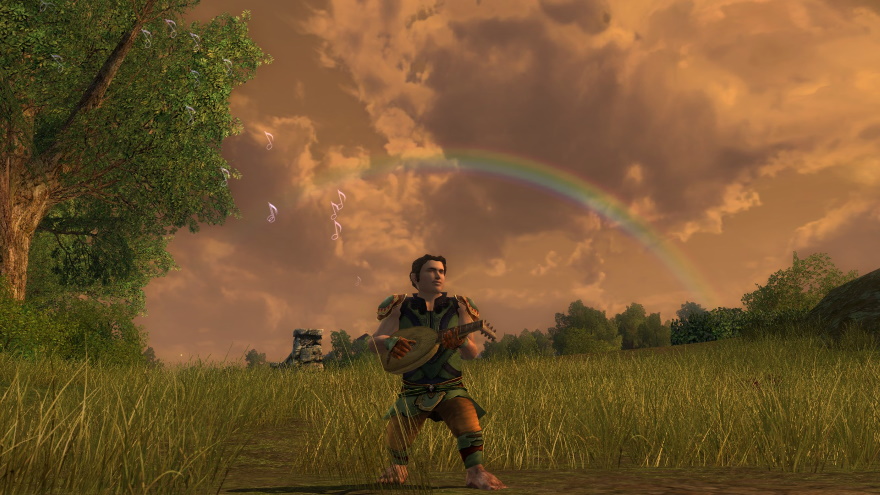 Another Star Trek Online pic, this one featuring a neat shot of two starships leaving spacedock. You have Hikari to thank for it.

“I do miss when STO sets out to do their own thing or engage in a bit of Trek Nerding, like these amazing NX-01 Refits, patterned after Doug Drexler’s own design. Hopefully, with Picard coming out, we can get away from the DSC ships and back to some good old 25th Century fun (or very, very late 24th if it’s Picard-based ships).” 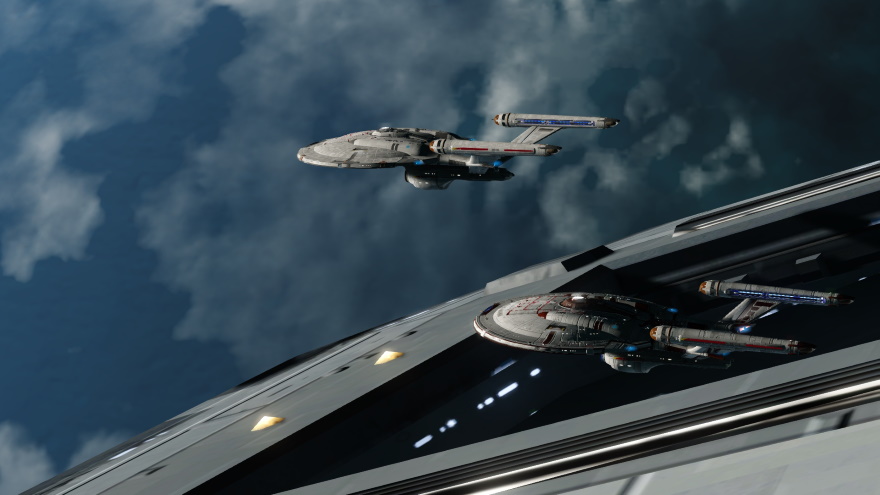 For my own contribution this week, I’ll share a picture I took of a Nova Praetoria police station from City of Heroes. I thought that the well-dressed cops were all standing around in a random, fairly useless pattern, perhaps confused by the presence of microscopes in their precinct.

Your screenshot challenge is to share a picture of mobs or enemies going about their normal lives before you aggro them and start attacking. Ever get a shot of them sleeping, eating, or milling about? Let’s see it! 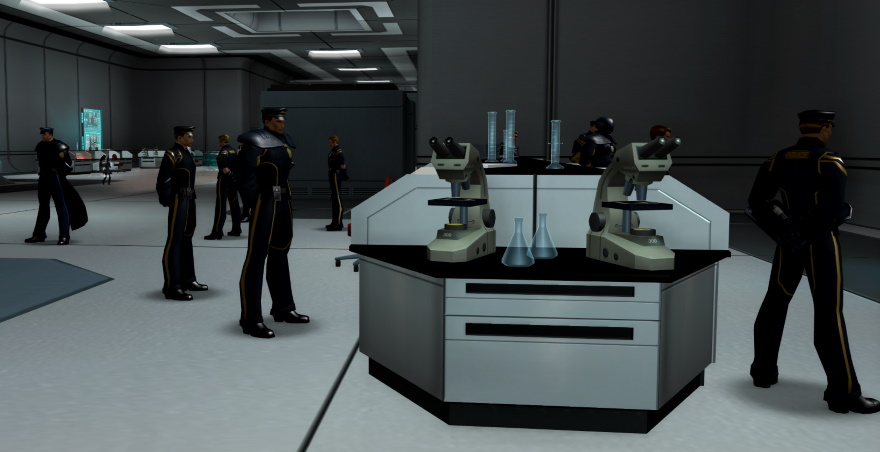 BDO’s critters have a lot of character in their various settlements. Here, some nice orcs invited my Shai, her fairy, and her donkey to an evening BBQ – and didn’t even suggest that any of them be on the menu. :)

Was totally going to stick to the challenge this week, but..the palace in Il Mheg looks so good lit up at night…

I was supposed to have some kind of crystals to enhance my lightsabers on SWTOR like those shown in the picture above because of being early access…but then my Collector’s Edition box got stuck in a holding facility half an hour’s drive from my place on X-mas, during winter, and I ended up not getting the box until like a week or two after launch….so they never gave me those crystals. I even contacted support about it and asked where they were, but they said it was because I hadn’t actually logged in during it or something, and refused to give me access. One among many reasons I don’t play SWTOR and the box sits in a closet…didn’t even open the box fully and there’s still a totally untouched statue in there…didn’t even pull it out to look at it. I actually enjoyed what I did play of that too…for 6ish months after launch. Would’ve liked to actually play through more, but it wasn’t worth the money, and now that they are F2P they have all my server’s worth of characters locked down/didn’t grandfather us in, and basically expected us to re-pay for the whole game to unlock basics of play even…which is why I never came back…

Thanks for the feature :)

I ran across a certain Trill Science Officer and a certain Klingon Tactical Officer having a spat on Risa in Star Trek Online. It didn’t end well.

And to the matter of the actual challenge, this has come up a few times in recent streams, so here are some shots of the Filth infected citizens of Solomon Island discussing their regrets, lost keys, and cheese on sale at the supermarket.

I really do need to get back to Secret World some time today, especially since the clock on my patron access is ticking. Too many games, too little time. ;)

Thank you for the feature, Justin! You’re partly correct: one of the bridge crew in that previous pic have been replaced since it was taken, as I work at getting a character mix I enjoy.

Not much to offer this week, except my Pike-era Constitution-class starship seen against the blue backdrop of an imminent ion storm. The ship herself is pretty much set now, gear-wise, and I like what I have.

Next week? Hopefully, something from a game other than Star Trek Online! :-)

Well, I did get a shot of a Crey Protector trying to punch me in the face, despite having a giant cannon pointed at my chest.

Not exactly NPC mobs, but little did this innocent DJ know that soon, the ferocious bunnies would attack!
(I kid, he totally knew Hikari was coming after him, he was her Best Man after all)

The pose on the last shot is ridiculous, but I love how her wedding ring is at the center of the shot.

Here I am in front of an enemy mob in the Old Forest of Buckland as it goes about its normal life: standing there doing absolutely nothing, because it’s an effin’ tree.