What goes on with NPCs when you’re not looking? Egocentric adventurers think that they’re sitting around, sharpening blades, and preparing their spellbooks for encounters, but the truth is that these mobs have secret lives of their own. So what does that look like? Our crack One Shots team went to work documenting this from hidden perches.

“Black Desert’s critters have a lot of character in their various settlements,” reported Natalyia. “Here, some nice Orcs invited my Shai, her fairy, and her donkey to an evening BBQ – and didn’t even suggest that any of them be on the menu.”

Marinated fairy is a treat if you can get it. Ahem. Or so I am told. 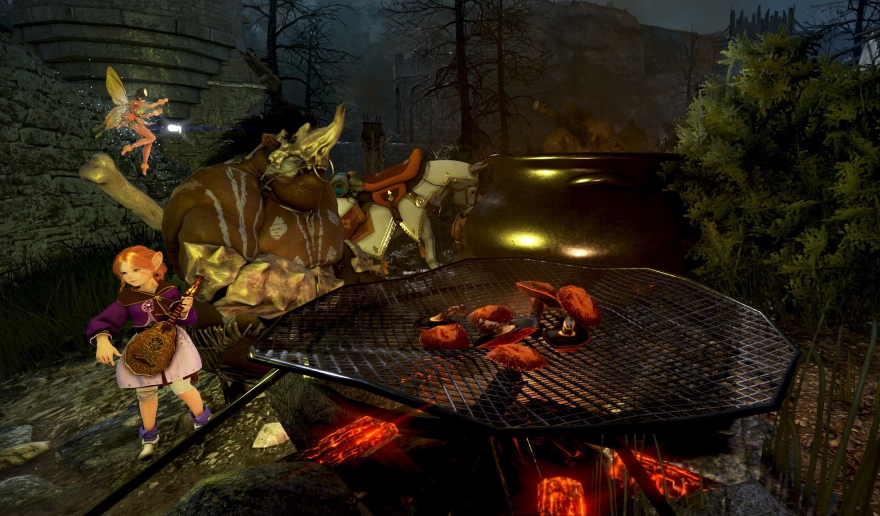 Vincent managed to find the one and only attractive area that Final Fantasy XIV has to offer. What a dog of a game, visually, am I right? OK, I’ll show myself out.

“Was totally going to stick to the challenge this week, but the palace in Il Mheg looks so good lit up at night,” he said. 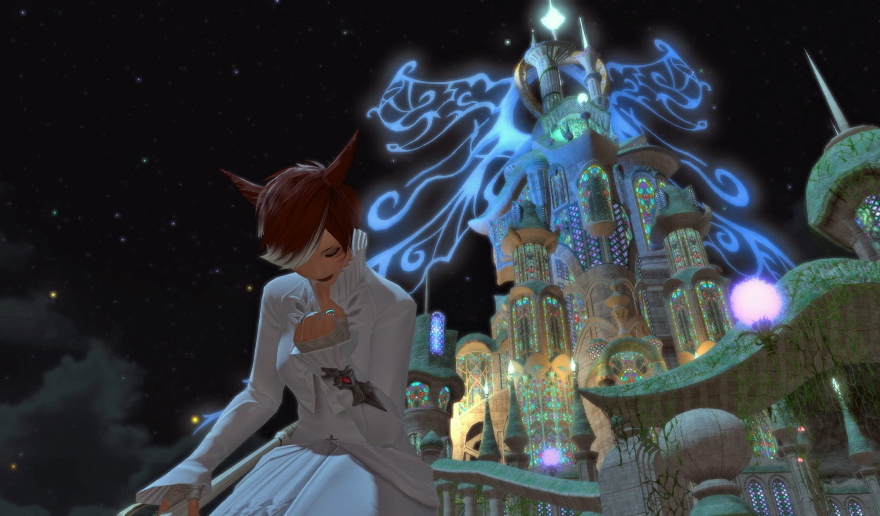 Studies have shown that Klingons hate beaches, good times, and good vibrations. Also, they’re horrible at surfing. So the next time you go to a pleasure planet, you best not to bring one.

“I ran across a certain Trill Science Officer and a certain Klingon Tactical Officer having a spat on Risa in Star Trek Online,” posted Vgees. “It didn’t end well.” 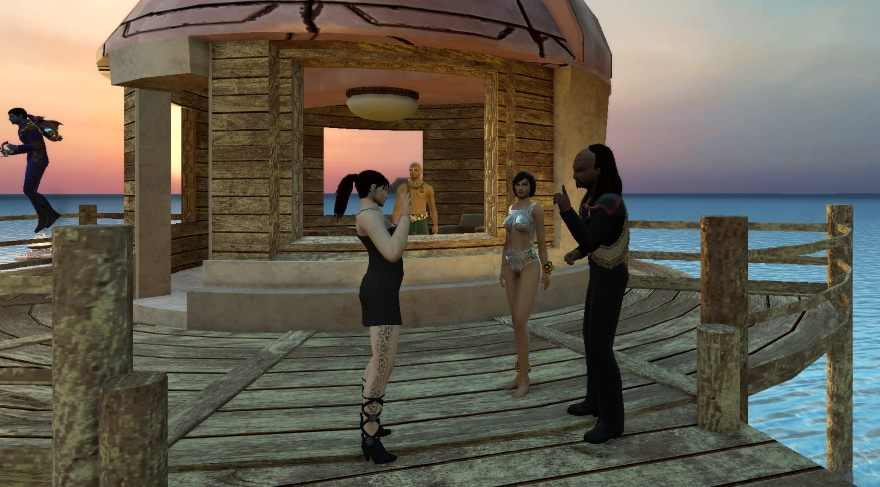 Hikari shows us what true body horror is, thanks to Secret World Legends: “To the matter of the actual challenge, this has come up a few times in recent streams, so here are some Filth-infected citizens of Solomon Island discussing their regrets, lost keys, and cheese on sale at the supermarket.”

How do you feel when the best outfits in an MMO come from lockboxes? I don’t begrudge Mordyjuice this amazing Starborn outfit in Guild Wars 2, but I wonder if its origin lessens its significance for both the user and viewer. Maybe nobody cares? Hey, it’s darkly sparkly, so let’s just ooh and ahh at that! 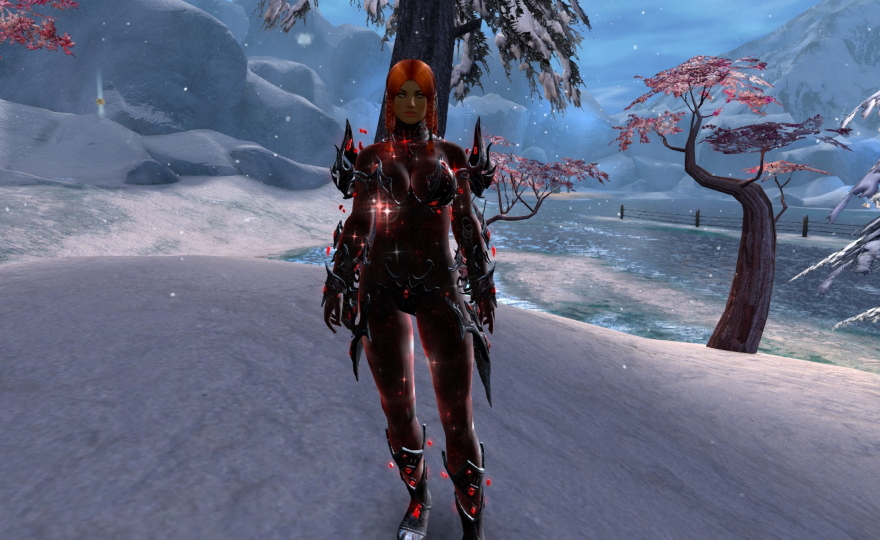 For this week’s screenshot challenge, share a picture from a summery locale or festival in your MMO! Hey, it’s August, we’re all on vacation anyway.

The Zephyrite festival is in swing on Tyria, and the Consortium would like to let you know that Southsun Cove still has beaches too!

Concerning Peter Gabriel, my fav solo songs are Games Without Frontiers and In Your Eyes, though Monkey is definitely up there. Also, I think the Phil Collins-fronted Genesis was very good and sometimes great, but they paled in comparison to when Peter was in the band.

Yup. There is no question that Genesis dropped off a little when Peter left the band. And Peter Gabriels solo albums were great culminating with “So”

In Your Eyes is one of my all-time faves.

One thing to be clear though. I know a gorilla is not a monkey pictured…but that’s the song that stuck in my head when taking it.

…and it was taken in b4 500 players zerged it, as it’s a sort out rare in Mechagon. Where a few seconds later, the screen was full of PC’s. o.O

Does your summer suck?

State of the galaxy got you down?

Well, come visit Vette and I at our secret little smuggler’s hideaway on the ocean world of Manaan!

There’s a cantina band on the patio most nights, and if you show a copy of this message to the bartender droid, your first two drinks are free!

We’ve got sun, we’ve got sea — we’ve all the friendly ne’er-do-wells you could ever want to meet!

Well, I’m back in Anthem. And unfortunately, summer is on hold due to a Cataclysm.

So storms are they summerly wheather and it is a festival of sorts with all the players returning to For Tarsis.

I guess it is analagous to summer fun if you were, say, caught in a hurricane.

It’s always Summer in Los Santos (except when it’s not). I do like that it can give a Summer vibe without necessarily going to the beach (it’s got plenty of those, too).

I even posted a sequence from The Spy Who Loved Me on my twitter recently. The game has pretty much abandoned any pretense of ‘original’ vehicles in favor of homage vehicles.

But sometimes, the beach is just what the doctor ordered, and BDO has made the Terrmian Waterpark lovely again (After one really bad year that nearly ruined it).

Even if MJ’s Shai is afraid of the cannons.

Well, anything goes in Los Santos. If you have the guts or the coin. Heh.

When you really want to take part in the new Summer jump-puzzle event in FFXIV, but get distracted by the local…scenery. What can you do?

Side note: Those are NPCs behind me and not actual players–and for that, I say “thank you, Square Enix” /smirk.

Let’s try that again, shall we?

Anyway, taking a tour of my Backyard Battleground in Garden Warfare 2 now that the new game is being worked on and tested and likely to launch before XMas, I decided to take a tour of the place on various characters to reminisce about the place.

One can argue the Rose looking out over at the Zombie base is a gloomy summer perhaps, but they are zombies!

The second one is on my zombie electrician on the plant’s side, that rainbow really makes the scene quite appealing.

The 3rd one is inside the Gnomiverse and may not be super summery, but it has it’s own appeal.

Being the gnome of the pink pigtails you may enjoy this little tune from garden warfare 2! After you find all the golden gnomes and open some chests, then solve a puzzle you get into a secret gnome treasure chamber with, among other things, this:

The feds are now investigating Activision-Blizzard as the SEC subpoenas execs...