It feels good to be told you’re doing a good job, and much like proud children watching their parents clip their latest crayon drawing on the fridge, game devs love to show off the positive remarks their game gets. So it is with the latest trailer from Killsquad, which got off to a strong start and appears to be keeping up the momentum if the press release that crossed our desk is any indicator.

Said press release touts a playerbase of over 75,000 and also promises that more is on the way for those players in the form of its Unseen update, which looks to bring “exciting new content that the Killsquad community has been waiting for.” While specifics on what the Unseen update has aren’t available yet, a roadmap image touts the addition of a new area, a new enemy, and an in-game vendor. Those features and whatever else might be in the update are due to arrive at the end of August.

In the meantime, you can enjoy the multiplayer ARPG basking in praise in the trailer below. 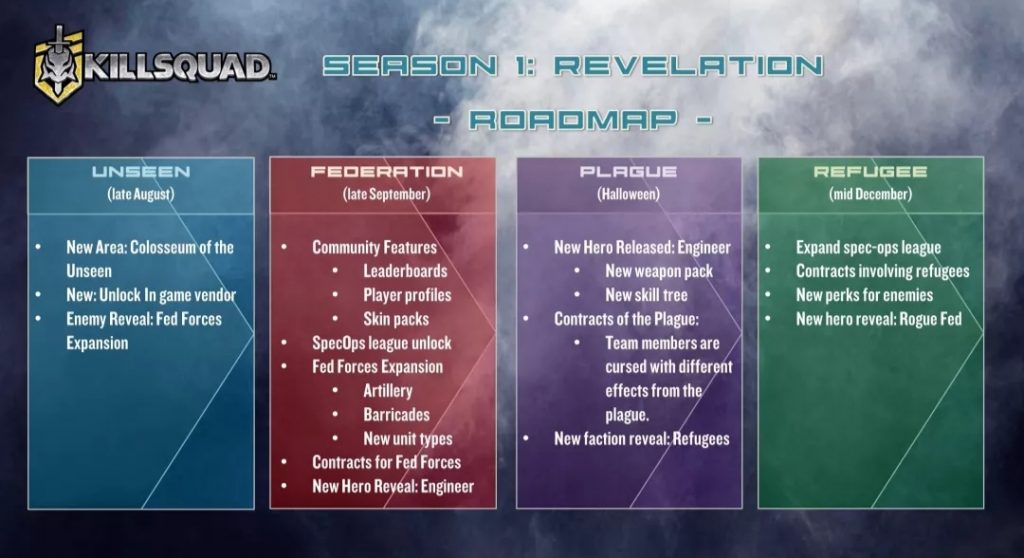 The dev team consist of 16 people only. I’ve seen stupid mobile apps with teams 3 times bigger doing 3 times less. Amount, speed and quality of work these guys do is phenomenal compared to their size. The game has major potential.

There already is a vendor. I think what they mean is that there’s a new unlock in the in-game vendor.

Anyway I think this game has some of the best combat I’ve ever played for an ARPG. My issue is that there is not really any rhyme or reason for it so you get bored much faster than usual. I like a storyline to go along with my gameplay and without one I really don’t feel like just fighting again and again with no real purpose.

If this had been a demo of a game put up on kickstarter for the combat they were going to have in a game they wanted to make, I believe they would have got a crazy amount of funding to make that game. Instead this is the game, and while the combat is amazingly great, even random maps in the same few instanced areas over and over get boring without a real reason to keep doing them.

There is progression in the weapons but it’s very minor and slow. Eventually you add another random buff that can be on the equipment once it graduates to a much higher tier – yet the base damage and everything else is still the same. The progression doesn’t feel like you’re actually progressing and it gets boring without a story and a full game to play through.

This could have been the best ARPG ever released with this combat style if they had some big explorable game worlds and stories along with it, but they don’t. Yes, the price reflects that and I got my money’s worth, I just don’t see a reason to stick around and keep playing after a little while.

It doesn’t mean I’m writing the game off, I’m go back in the future to see about if the game changes during its time in Early Access. If they stick to this same formula it won’t be a long term game for me but I’m glad I got to experience the combat in the game. Such a nice job on that action combat taking real skill rather than spamming pots and such, it’s a shame that it’s in this game without much to it.

The Daily Grind: What MMO needs a waaaaay better tutorial?

Grab a MARS closed beta key from Subgames and MOP and...