In Path of Exile, don’t despair if you feel like a beginner for a while — the more you play, the deeper it gets. But getting in and getting started needn’t feel daunting, either. That’s why Wandering Wraeclast is running a series of guides for those just getting into this MMOARPG, so you can get the gist enough to enjoy the game. Maybe you’ll dig it so much you’ll dive deeper into the complexities of it (but you don’t even have to do that to keep having fun).

END_OF_DOCUMENT_TOKEN_TO_BE_REPLACED
So far we’ve taken a look at classes and explored the beginning basics of gear. That, however, will take you only so far. Before long you’ll have filled all your slots and reached the point you want/need to be much more discerning about what you pick up and quip. And trust me, stopping to look at every single piece of gear is not the sanest option. I’ve tested and confirmed this! What many folks will suggest is to grab yourself a loot filter to make it so that only items you want to show, show. That helps — if you know what you want to show! Whether you decide to use a filter or not, there are some tricks that will allow you to better optimize your gear search so you can spend more time playing and less time sifting through the loot explosions. 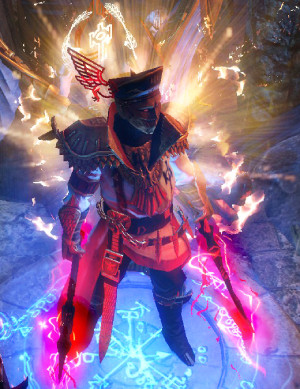 Before delving further, let’s recap builds and attributes. By now you’ve noticed that the color coding in Path of Exile is pretty prominent. It really is the base of everything. As mentioned in previous guides, the core attributes of the game that each build is dependent on are strength (armor — to take hits), dexterity (evasion — to avoid hits), and intelligence (energy — to cast), represented by red, green, and blue respectively.

You also have multiple combinations of these reflected in your playstyle, such as a caster that evades or a tank that casts. You can build a character that focuses on armor and evasion, armor and energy, evasion and energy, or even a combination of all three instead of just one attribute. That is important for our guides-at-a-glance below.

What you see is what you get

One really nice aspect of PoE is that every non-unique item of a particular type looks the same. (Not so nice if you like the stats of one item but the appearance of another, however.) And not just on your person: It’s great because loot falls openly on the ground and you can identify it at a glance by its appearance. If you are looking for a spiked shield, you’ll see it plain as day all spiky on the ground in front of you. And how it looks on the ground (or in your inventory) is how it looks on you. Even the currency items have their own particular looks. The base names will also be the same, though magical, rare, and unique items have additional prefixes or suffixes after they are identified. If you have loot names on (press z to toggle) you can search that way, which is especially helpful when a loot explosion makes a pile and it’s hard to see what is on the ground.

But how do you know which items you want to search for? You learn which ones benefit your build and just keep an eye out for those. And we’ve got a breakdown for you.

Unlike many games that can have a ton a variations in name and look for all the variety of gear, Path of Exile keeps it pretty simple. Although you always want to check the full description of an item that catches your eye by mousing over it, you can tell at a glance which items to look more closely at by their name or visual. And although the exact names of items change as you level up, some descriptors can give you a clue as to which attributes they focus on. There is some overlap in name type, especially in boots and gloves, so be sure to check the stats. Know that both body armor and shields have inherent movement speed penalties as well.

The chart below offers a breakdown of each name descriptor and its corresponding base attributes (peek at the linked wiki to see a visual of each piece of armor in game!):

It is important to point out that this emphasizes base attributes; each piece of equipment can have alternate modifiers and unique properties. (Also remember, these properties can often be changed if they don’t quite fit what you want!). 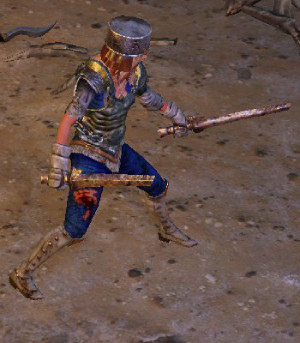 If you thought there was a lot of armor, wait until you see the weapons! There is a multitude of categories let alone weapons within them. However, unlike the armor, weapons have no naming conventions; each individual weapon has its own name. Non-uniques at least have the same look throughout each category! The types themselves can be broken down to correspond with specific attributes. Here they’re also separated into melee and ranged to easily discern which weapon/s you’re most interested in for your build and playstyle.

Want a little more info? Here I’ve included the general highlights about standard modifiers below as well as a link to the wiki for even more details.

Guess what? That’s not even all the stuff you can collect and equip. Exiles have plenty of accessories to adorn themselves with and gain even more power. These, however, can’t quite be grouped like the armor and weapons can. Each individual name denotes a very specific base stat before modifiers. Because there are far too many to list out individually, each accessory includes a link to the specific wiki to see details and visuals.

Amulets – There are 12 regular amulets with their set base properties, but there are 35 corrupted talismans! And that doesn’t even take into account all the unique neck pieces. This accessory has the most variation in modifiers 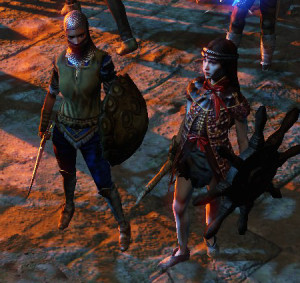 Belts – Belts come in nine base types (with a whole slew of uniques!). Each type has its base stat. As for the explicit modifiers that can be rolled on them, most provide strictly defensive bonuses such as increases to resistances or defenses.

Quivers – Quivers can be equipped only in the off-hand slot to work with either with a bow or for unarmed. Yes, you can have the stats and bonuses of a quiver if you elect not to have any weapon other than your fists. Of the nine non-unique quivers, only the ornate quiver has a socket to add gems.

Rings – One of the main properties of many rings are resistances. One special note about rings is that two-stone rings have two resistances, and the unset ring is the only one you can socket with a gem.

The last two types of equipment are flasks and jewels, and each adds even more to your character. Flasks are placed in the 1-5 quickslots and are filled with potions (fully in town, or slowly by killing mobs) used to either restore health or mana or add speed or resistances. Health flasks are squared, mana flasks are more rounded, and special flasks are oval.

Jewels are just like gems you socket in your equipment except you socket them into your passive skill tree instead. Jewels are not as common to find as gems are. As with gems, you can socket and remove any time you want to (as long as you aren’t in battle).

I commend you on trying to break down POE gearing into more simple terms, but realize it’s an extremely daunting challenge to try and explain.

I’ve been playing steadily since March and still learn new information every day.

Perhaps as a future installment you could elaborate on the importance and limitations of the many “unique” items in terms of builds.

Because of the complexity of loot, especially what unique items bring to the game, I typically look for builds that are not reliant on unique items in order to make them work.

I dont like that restriction when I play, partially because I dont trade that much, and playing a build that doesnt really work until you have a handful of specific items, just isnt fun for me.

Just as a bit of general info not aimed at anyone but if you want to follow a build guide from the PoE forums for instance look for ones marked : ssf or solo self found.

For the most part those will be designed to work without unique items. So as long as you can get the colours and links needed on your rare items you will probably be able to do just fine, assuming you cover resistances etc. Depending on the build some unique might make things easier but are for the most part they will be nice to have items rather than a necessity.

speaking of colors and links…

I really feel like the game should reward you ONE 5L with random colored links when you beat the entire game.

Instead, quests near the end reward things that are very easy to find, like 4L boots.

Just as an fyi you can actually swap armour appearance if you wish. Though admittedly it does need a mtx item from the shop called skin transfer. I am not at home at the moment so can’t check how much it costs but I seem to think that its pretty cheap.

OOOH!!! I did not know there was an item to make it possible! I only knew separate appearance items were sold. Wowsa, that is pretty awesome =D

I think it’s the single cheapest item in the store at 6 points for one skin transfer. Or in bundles of 10 for 50 points and 50 for 200 points.

For reference, 10 points = 1 dollar for points bought straight up and not as part of supporter packs.

Ya, if you really like to see your Paladin’s skinny legs, go for the vests. He’s so cute in them.

RuneScape Mobile has finally launched for iOS and Android – here’s...

Book of Travels features Breath of the Wild-inspired cooking, food, and...