Just a few short years ago in 2016, the World of Warcraft community caught fire after a popular rogue private vanilla server threatened with legal action pivoted to agitate for Blizzard to revisit the idea of progression servers then taking off across the MMO industry, complete with petition and live meetings. Though at first the posturing had seemed like a joke – you guys remember Nostalrius’ “core values” demands, right? – by 2017’s BlizzCon, Blizzard had come ’round to the idea and announced WoW Classic, putting to rest the “you think you do but you don’t” meme.

Now, almost two years on, the official WoW Classic is finally launching to the public. And we do mean the public.

Even Nostalrius offered some congrats to the Classic team.

We thought about a message of congratulations for @Blizzard_Ent and the community for this #veryverysoon™ epic's release but well… LET'S GEEK!

See you on the other side ;)
Love you all (especially Chromie!) pic.twitter.com/phkn5SLHky

The servers are expected to go live at 6 p.m. EDT this evening, simultaneously around the globe, so you west coasters will still be at work, and the Europeans will be heading off to dreamland, but Classic will be up and hopefully functional when you are. We have it on good authority from a source who happens to be intimately involved with Blizzard’s infrastructure that it’s all hands on deck there and at affected ISPs for this launch, which won’t surprise you since the servers – including the new ones added today – were already flooded with people rolling their characters and claiming names ahead of the release this evening.

“On our backend, we have a number of backup and contingency plans,” senior software engineer Omar Gonzalez told Polygon in a piece earlier today. “We can grow and expand our servers, and we’re ready to adapt immediately, but we want to be very cognizant about how we’re managing our server populations because we don’t want to be disruptive to communities.”

Let’s hope they are overprepared! 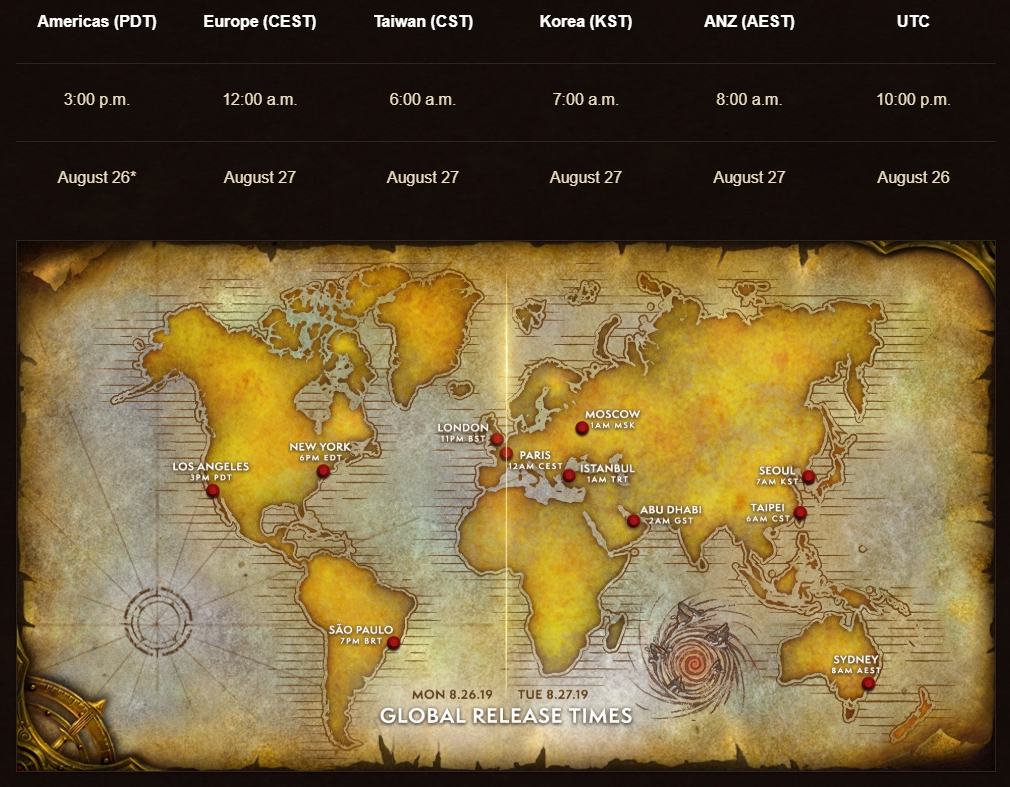 Blizzard has already posted up both a known issues list and a “this is not a bug” list for players. For example, “loot sparkles do not scale up with creature size” – that’s a bug. “The chest at the end of the encounter with The Seven in Blackrock Depths does not prompt a loot roll. Beware of Ninjas!” – that’s a feature. Ah, vanilla.

We’ll be updating this thread tonight with the latest, but in the meantime, you can get caught up on all our best WoW Classic coverage to date!

Let’s celebrate with a #ToastToWarcraft and 15 years of epic adventures and everlasting allies. Here's to rediscovering Azeroth and forging new friendships! pic.twitter.com/4Ojgyh8TC6

And the view of Gnome/Dwarfland on Justin’s NA server: 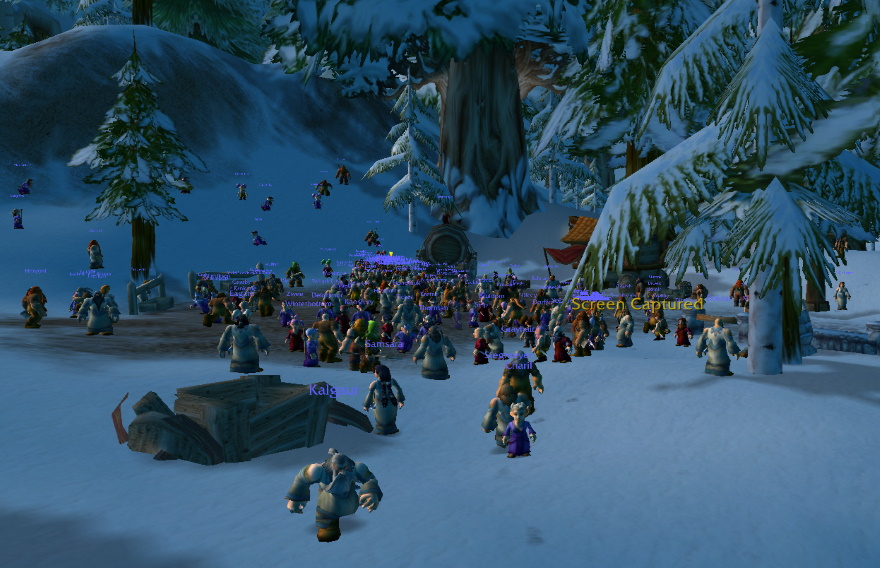 We suggest that players choosing a realm consider one of these, as other realms currently marked as “Full” population will experience extended queues.”

“We suggest that players choosing a realm consider one of these, as other realms currently marked as “Full” population will experience extended queues,” Blizz writes. Herod is predictably now over 30,000 in the queue.

“Scamming other players is a violation of our World of Warcraft game policies. We will investigate any reports of scamming that we receive and take the appropriate action, removing gains and penalizing those who violate this policy as needed. It’s important to note that Game Masters will not restore any gold or items that may have been lost. World of Warcraft loot systems empower players to manage loot directly. For this reason, Blizzard support will not redistribute loot in the event of a dispute between players. If you’re playing with a new group, it’s advised to always be clear on the loot rules before proceeding . Discuss the plans for distributing loot with the raid leader before you become locked into a raid. This will provide you with an opportunity to make an informed decision on whether you want to decline the invitation or leave the group. Multiple loot methods are available in WoW Classic, and we encourage you to group with others you trust, especially when using Master Loot. In some extreme cases, Game Masters may deem it appropriate to penalize a raid leader who fails to adhere to clearly established looting rules. Please keep in mind that looting rules like ‘Main Spec > Off Spec’ are not enforceable qualifiers.”

We're aware of an issue causing boats and zeppelins to go missing on certain servers. We've developed a fix, but it requires realm restarts to take effect. We plan to do restarts early tomorrow:https://t.co/1jmTw5URM8 https://t.co/aeVLyj4zkj

The interesting question is – what will the server populations look like in a few months? (IE – Is it unbridled nostalgia that will loose its luster for many OR will Blizzard decide to “Roll Back” aspects of Modern WoW across the board down the line?)

I think a wow progression server would be pretty damn awesome

They added a forth Oceanic server as well, this once called Felstriker
https://us.forums.blizzard.com/en/wow/t/new-oceanic-realm-open-7-30pm-aest-august-27/271561

I need other glasses to see it properly these days that i didn’t need in 2004 :(

Hmm, spammer or not spammer ;)

LOL how’s that workin’ out now?

Blizzard thinks they know best, but they don’t and never did.

It’s ironic, but their own statement is an accurate self descriptor. They must have been in projection mode.

Only hit 14. Had to work an on call shift in the middle of it but could always get back before booted. Just want to hit 60 in less than a month and all is good.

On a pve server with 5-6 hours a night you probably have a fair to middling chance of getting to level 60 in a month on a pvp one you are either going to struggle somewhat to reach that goal .

But anyway good luck hope you make it .

If you try and play for hours nearly every day with that specific goal in mind, you might get 60.

Others get it in more than one month.

BFA was a ghost town anyhow thanks to ff14 being superior ro wow retail, classic didnt drain the entire population by itself except in the deranged minds of fanboys

Y’know, this evening would’ve been fine if Eastern Kingdoms didn’t crash on a majority of servers. ’cause now the Horde players sans-Undead ones are leveling above the Alliance (with the exception of Night Elves) on PvP servers which are already tend to be Horde-biased to begin with.

And having to sit in a 3+ hour queue just to get in after having been in it fine without any significant issues (beyond the initial chaos of the first hour) is frustrating.

I switched servers to one of the recommended ones this morning, got all 6 of the names I wanted. There was a bit of glitch with the account cap still being at 3 at 10 PDT, but that got fixed about 10:30. (Remember, Blizz is in Pacific time.)

Logged in at 2:58 PT and realm went live at 3:00. Got in instantly, along with a gazillion other people mobbing the initial quest giver. Night Elf land was thick with corpses of target mobs. Logged off around 4:30, after having spent about 20 minutes hoping a spider would spawn that I had a chance of tagging. Played some SWTOR. Logged back in around 9:00. No queue at all. Got right in.

Sorry to hear so many folks had long queues.