Stream notes are at the bottom of this post!

Gamigo is just about to go live with ArcheAge Unchained’s deep-dive stream here today, live at 1 p.m. EDT. As we noted yesterday, ArcheAge Unchained is dropping on September 30th; it’s Gamigo’s do-over for the beleaguered MMORPG sandbox. Unchained is essentially a new server for the game that is entirely buy-to-play, with no subscription and no pay-to-win gear or amenities possible – just vanity items, Gamigo promises. It also evens the playing field for things like labor regen, labor caps, and housing opportunities. Founder packs went live on the official site earlier this week.

The stream begins at 1 p.m. EDT – we’ll be recapping the big news in this post as it comes!

Merv Lee Kwai aka Khrolan has kicked off the stream. He says this initiative actually began 2.5 years ago at Trion when Trion and XL Games were working on ways to combat the pervasive idea that the game’s business model sucked. Gamigo, Khrolan says, was equally supportive of Unchained, and here we are.

There’s some reiteration on the new website and founder packs and launch, but this is new: There will be no early access for this server, and it’ll launch at the same modern content level as the other servers. Both games will get the new patch together.

We also now know what the update is called: Shadows Revealed (i.e., the Korean patch 6.0). The 64-bit client is included in this patch.

The team’s also talking up a de facto season pass called ArchePass (it’s pronounced ark-pass, if you’re wondering). The diligence (login) system will reward folks for playing, while the premium reward track is focused basically on cosmetics, in keeping with the not-P2W stance here. There will be no lockboxes, mounts, or labor potions in the cash shop. (Glider appearance skins, though, yes.) 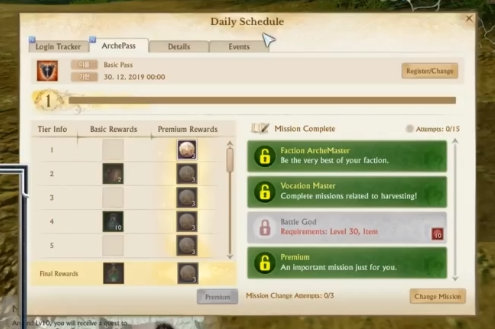 Trade and tradepacks will not be changing (back) – yet. Apparently, that’s something Gamigo and XL are discussing a lot.

ArcheAge Unchained will be on Steam, ideally also on September 30th. A South American server isn’t planned but is being considered for the future.

Auto-loot pets aren’t in Unchained, at least not yet.

Housing is changing in the sense that everyone in Unchained has patron rights now. It will not be instanced. The devs think the best real estate in the game will still be hotly contested, but there won’t be tax certs, so nobody’s going to be “rocking eight plots” as in some other servers, as it’s exponentially expensive to spend labor on hoarding territory. The team also believes it’s added enough more housing to reduce the land rush a little bit.

In the case of alt accounts: Unchained will enforce one client per person logged in at a time, with three total alt accounts considered legal. Legacy will remain as it is.

After ingesting this new information, I feel the bitterness slipping away and I remembered alpha when the game was such a blast. With the Unchained servers, I’m considering taking a leap back into it again.

After doing some looking around of old forum haunts, I see that the RP community and a few other guilds that were big back in AA’s infancy are stirring to life, buzzing with excitement that many of us old players are feeling over this new information.

I’m not going to resist it. I’ll put an extra day in at work to pay for the highest founder’s pack and look forward to giving it another go!

Same. This game it’s core is one of the best I’ve played. Really loving what I’ve read about the changes.

To be fair if the do what RU archeage did it can succeed. From changes i see, and my knowledge of playing AA kr ru na, ru has the best player experience. It looks like they are following the Ru plan.

So its not mega new just coding from othet region. AAs issue. Many newer games to play to go back to mega old one.

To date no game has had real crafting and housing like AA. But Air does… and in many ways better and newer.

So the choice house spots get taken forever by the kids who teleport hack rush the beginner quests for scarecrow farm.

They are delaying house claim by a week so everyone has a chance to get what they want, I think they said the first weekend after launch

I want to believe this will work. I really do. I may even try it, but Im not letting myself get too into it. I wont be buying founders packs or archepass, but I do hope for the best for this. The game had/has so much potential, it’s such a shame it’s been run so terribly.

I think the only way to show that the game does have potential and that a business model like this that isnt P2W is much better for our regions is to support their efforts. I know its not for everyone.

But I am definitely going to be supporting this version of ArcheAge, just in the hopes that its massively successful as this non-P2W model and hope to see even more changes/rippling effects across the board when it comes to korean MMOs coming to the west.

He invited his kid and did his hair to make him look older how sweet is that… and they expect us to buy this shit!!!!

Archeage in New Games News section???
Have they found how to avoid bots, hacks…?

I have to say, this may just be enough to save Archeage.

Everything on my list of questions got answered, and you know I have been highly critical of Archeage in the past.

Today’s livestream and the way Khrolan presented everything is enough to zero out the past and start over and let Archeage Unchained be judged on its own merits.

Can you persuade red to come back ?
Love your channel. Keep it running :)

Did they at any point specifically show their cash shop and what will actually be in it or are they still dancing around it and just talking about what will and won’t be in it?

bound cosmetics, glider skins and such

They’ve shown no examples and have said a lot of things that won’t be in it, I’m guessing it will be mostly cosmetic but since they’ve still not said cosmetic only it seems pretty clear to me it will have some stuff that provides minor advantages (they’ll call them “convenience items” of course).

They have said that with the premium pass the additional rewards are only cosmetic.

They said anything they even think is in the grey area will not be included in the cash shop. Only Cosmetics, glider skins and furniture items and only furniture that doesn’t have stat bonuses.

good. This is how it should had been from the start.

Overall I am happy with it but it would had been best to put a reasonable limit per account on land ownership(not per toon) and not allow more than 2 accounts per person. Still sounds a lot more fair than most f2p games out there and it comes with ArcheAge gameplay so I think I am in. The lowest fee is reasonable too