My first real exposure to AdventureQuest 3D was years ago now when I was asked if I would host a special giveaway on an OPTV stream. All I had to do was check out AQ3D’s early access and hand out codes for folks to join in as well as get a spiffy MOP cape. Little did I know what was in store from that first encounter  — and how that would lead to rocking out with Korn!

It turns out I was quite charmed by this title. While it is family friendly (love this!), the game isn’t childish; it can be lighthearted and whimsical, but it also throws in plenty of puns and dad jokes to elicit smiles (and groans). How could I of all people not appreciate a sense of humor and playfulness? I’d become even more impressed as I got to know the lead developer, Artix, who would join later streams and share crazy stories, and the rest of the Artix Entertainment crew — not just for the work they put into the game but for who they are. I admire the vision of the company. And have you seen how often AQ3D is updated? Weekly!

All these combined with a passionate community of fans (OK, and adorable Moglins to love, too!) make AQ3D a game on my permanent play list.

Everyone starts at the beginning, so why not begin with the end instead? Or most recent, I should say. While I am not shy about extolling the virtues of the game when I stream, this most recent event made me really want to share the special something that I think AQ3D has with even more folks. At the beginning of the year when I toured the AE studio, I got to hear about many ideas; one of those was to host genuine concerts in the game. As a total music freak, I was so excited by this idea. I eagerly anticipated when this could come to pass. And now it has happened!

On Tuesday, August 20th, the main city of Battleon opened its new coliseum with a special performance by the metal band Korn. In their AQ3D forms, the rockers took to the stage and played a number of songs, including a new one debuting on the band’s upcoming album. As the music beat around them, players got to pound on thematically related mobs for special loot. Freaks on a leash? Present! Quests can earn you even more concert swag.

Music, mosh pits, dancing, and goodies? AE and Korn put on quite the show. The added crowd camera was an ingenious touch; who doesn’t like picking themselves out of the concert crowd on the big screen? If you missed the opening day, it doesn’t mean you have missed out. The concert and all its related trappings are available in-game for a month! Hop on in and experience it for yourself. We’ve also got the entirety of our experience, including a guest appearance by Artix, recorded for posterity too.

While the game (and concert) is free, there are VIP tickets for purchase that give special pets, travel forms (mounts), and cosmetics, as well as access to a special VIP lounge where you can interact with and get your selfies with the band members’ AQ3D selves. All together it was quite the experience and totally awesome.

As much fun as I had with this particular concert, the fact that it was billed as the beginning of a series has me giddy! More in-game concerts of real live bands? YES PLEASE! I cannot wait to see who else joins in on this new specialty event. I am certain it brought new fans to AQ3D as well as new fans to Korn, neither of whom would have necessarily come across the other any another way. I hope to see a variety of music presented in this format too!

Besides the battle concert series, AE has plans for AQ3D. Lots of plans. Just listen to Artix on his streams sometime. (Seriously, I think the world needs an Artix/AE podcast! You’d be inspired.) And with the energy and drive of these folks, these ideas — no matter how out there or far-fetched they may sound — can come to fruition. The battle concert is just one example of thinking outside the box. Innovation in the gaming industry? Oh, definitely yes please. We could use hefty doses of this and the gumption to follow through. I am excited to watch the continued trajectory of the game and the company. 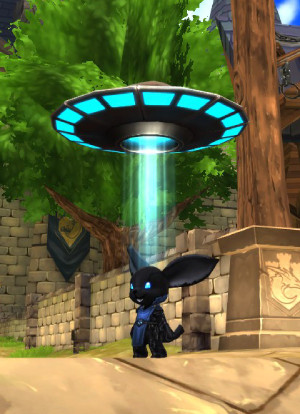 Can’t be too punny

A big reason for me to enjoy playing AQ3D is that there is always a reason to smile when I do. And those smiles come from the plethora of puns peppering everything from cutscenes to quest dialogue. I cannot discount how welcome humor is when I kick back and game. Cheesy, corny, or crazy, I cannot help but look forward to the next quips.

I also love how the game keeps abreast of current happenings and adds those references in as well. With the weekly update cadence, AE can toss timely tongue-in-cheek references into AQ3D. A perfect recent example is the Area 51 meme that was celebrated with special UFO travel forms and pets. It’s hard to get the feeling that a company is stuck in the past when it’s lobbing current events at you.

Something I can support

Another thing I cannot emphasize too much is the atmosphere of respect that AE strives to engender among its games and communities. That means quite a bit to me. Yes, there is humor, but there is also respect. No studio is perfect by any means, but when there seems to be a huge dearth of studios/developers I can have respect for because of the way they treat players or because of their questionable or unethical dealings, you better believe I am going to support one that I see holding itself to a higher standard. Even if the game isn’t quite my style, I’ll still support the company how I can.

The more I learned about AE, the more I felt it was a company I could support: I watched as Artix would take fan requests and incorporate them right into game just because they asked, and I watched how the staff interact with the community, keeping things positive while making efforts to acknowledge everyone. Then I met them in person, and my opinion swelled. (All fans are invited to stop by the studio if they are in the area for a tour and to meet folks, so I highly recommend it!)

On the surface, AQ3D never did seem like my kind of game. It isn’t a virtual world where I can dig and roleplay a deep virtual life. It isn’t even very complex (that’d be hard since it’s a cross-platform game). But I have found it fun, with amusing stories and some endearing characters. It’s a relaxing diversion from rigors of real life that I can share with friends. Sure, there are grinds for some items (and yes, I’ll grind for fun cosmetics sometimes!), but there are plenty of things you can do and get without having to rely on the RNG gods or a multitude of daily quests. Plus, this game isn’t done. Like a true MMO, it is continuing to develop with no sign of stopping. Impassioned developers forge ahead making new content, holding live events, and caring about their community.

Yes, you can call me biased. I like the game. I like what it and the studio stands for. I like the positivity and focus of the developers. And I don’t mind sharing that with the world. So here you go, world! Sometimes something special crosses your path, and I am grateful that AQ3D has crossed mine.

Really, you never know what they’re going to do next. That’s what makes it so interesting to be in this community.

I just get lost on what quest to do next all the time for some reason. What zones I should go to would help.

You should go to Greenguard. Then go to Heartwood. Then to the mine place I forgot the name of. Then Doomwood. Then Bone Cliffs and Isle of the Dead. Then Shadowskull Tower. Then the World Tree. Then the entire Firefall storyline. Then just do all the other areas you haven’t done yet like Arcangrove, The Underworld, Darkovia, Frostvale, and Dragons Graveyard.

I have tried a lot games from Artix like mechquest, adventure quest, dragon quest and so on. They got a lot of funny moments and good storytelling. Also they are games you can introduce a kid to play while still they are for you as well.

The gameplay reminds a bit throwback simplistic asian games I liked in early to mid 00s but with a lot more humor. Simplicity isnt always bad – it depends on the theme and how it is presented.

TitanReach plans its comeback after suddenly receiving full funding from a...

The Elder Scrolls Online is getting new Nvidia anti-aliasing tech in...

The Daily Grind: Are there MMOs with simply too much to...