My name is Nieve Vinther. I am 28 years old and was born in the wake of the Second War of the Dark Portal. I am a paladin of the Silver Hand who served as reinforcements for the Night Elf forces during the conflict in Darkshore. My favorite color is blue.

It is important at this time to keep these things straight. What has transpired over the past 24 hours is unclear in the extreme. Part of me wonders whether this isn’t all the result of some injury or another that has left me beside myself, gibbering in a sickbed in Tanaris… and if so, if this writing does in fact pass along to the people watching over me.

What I do recall clearly is that someone came up with the idea of seeking out the Bronze Dragonflight in the desert to hopefully undo the actions of the Horde in recent months. Our journey south was largely uneventful even with the presence of would-be Horde defenders, and we arrived at the Caverns of Time. What happened next is… unclear, as my next clear memory is waking up clad in naught more than squire’s rags within a billet in Northshire Abbey.

While the precise nature of events was unclear to me even at that early moment, my inquiries were as passive as possible. There was no recollection of my arrival in other armor, nor did anything seem amiss to those who were stationed at the Abbey; if anything, I was drawing attention by asking questions about my presence. Not wishing to be singled out or turned away, I focused myself on observation, finding the fields of the Abbey unburnt and no signs of Blackrock Orc aggression.

It seems as if the trauma of the past six years following my own apprenticeship at the Abbey had not occurred at all. Everything is as it was, save for the few grey hairs that are still pushing out of my scalp; even my connection to the Light feels weaker than it has in years.

At first it seemed almost like it was pointless to do anything; for an hour or two my goal was simply to sit within the Abbey in the hopes that everything would return to normal. When naught occurred save a growing hunger in the pit of my stomach and a powerful sense of boredom, I moved out and started taking the odd jobs generally reserved for the greenest of recruits.

There was no shortage of people taking on these objectives, certainly. As when my own apprenticeship began years ago, the vineyard of the Abbey was fairly a war zone between the Defias malcontents and the new recruits being sent in. It made things somewhat more tedious, although recalling the older ways of drawing upon the Light certainly made things feel a bit less tedious. There was a hair of frustration at my lack of options, but it subsided as I began to adapt to the changes.

Or, more correctly, adapt to the reversion. This wasn’t new to me. It has been years since we focused the holy energies of the Light into seals unleashed for potent Judgement, but the incantations still come easily to my lips. And simple though it may be, the time-honored art of adopting the mien of the crusader, then judging my target before unleashing holy might has not grown less satisfying to me. It was a reliable standby that has been sorely missed.

Still, exploration was not to be found. It has been years since my development relied upon scouting the mines and fields of this locale, but the pattern of things is not so easily forgotten, and with alacrity I had clad myself in slightly less ragged garments and a few bits of chain before getting sent forth into the larger realm of Elwynn Forest. Based on the time, my family farm still awaits on the border with the Redridge Mountains, with both of my parents still alive and well.

I refuse to go back there.

The footpath to Stormwind was still safe, simply slower to walk, and though my funds were meager I purchased a basic sewing kit and a skinning knife. (My talents had long run more toward milling and scribing as a source of additional income, but it seemed prudent to me in this unfamiliar place to focus on maintenance of my garments.) The tram still ran comfortably to Ironforge, and I dutifully confirmed my identity with the gryphon master whose name I have never bothered to learn through my many years traveling there.

Riding the tram back, someone was kind enough to offer me a rather vicious-looking axe she had no further use for. She was a Night Elf, eager to travel to Elwynn and Westfall. Part of me wondered if she, too, was displaced out of time, but the consequences of asking seemed higher than leaving it to one side. So I did not ask. 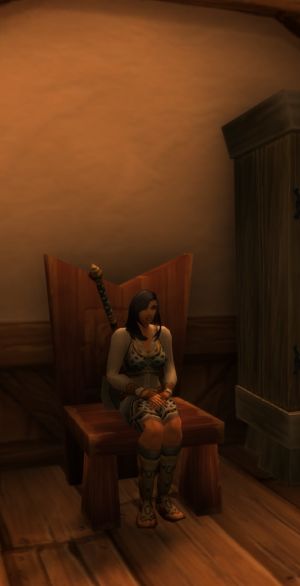 With what little silver remained to me, I set a room for myself at the Lion’s Pride and began to take what were once again familiar old jobs from the town and surrounding farms. Again, as per my memories, the grounds were fairly littered with dead kobolds, slaughtered boars, and murlocs pulled clear of the water and hewed to bits. It was a very near thing to having no space for another adventurer, helped not in the least by communal shouting veering into unsavory areas.

One pair of men were having a very loud conversation proclaiming their vehement hatred of any dwarves in the vicinity. Another was vocally praising Lordaeron’s orcish camps. I informed a guard and moved on, but the world seemed far less unfriendly in my memories of years ago. Perhaps that, too, is an illusion.

Individuals remained kind, of course. Many people had worked to ensure that more dangerous monsters were being engaged and dealt with in an orderly fashion for the safety of others, and I would be remiss in not acknowledging the kind Night Elf I met. Was it more friendly than my own time? I tend to think not.

Fortunately for my comfort, the innkeeper was willing to part with a small journal – this journal – for a pittance of coins when I returned from my work. I half-believe that I will wake to find myself back in my own home when the sun comes round again… but only half. Part of me has simply accepted that this is my life.

It is difficult to know what to make of this fact. Certainly it brings back memories of the time when my parents were alive, of my first days adventuring, of my first friendships and earliest triumphs. Awkwardly cutting hides free and working to mend my shirt similarly brought back memories.

And yet… several of those memories were welcome because I was reminded of no longer having to worry about these things. Do I really have a particularly new appreciation of the value of coin now that I have none? It certainly made me choose things with an eye toward maximized value, but is that inherently better? Or just different?

The questions are all somewhat speculative. If this book is found with no more entries, assume that I have been brought to my own time. If not… then I remain here, and I will write as time continues.

May the Light be with us all.

I join the ranks of the Silver Hand.

As long as you have your shovel, you’ll be ok.

Wow. Fanfic with a purpose. Cool.

Great approach to this. It’ll be fun to continue reading.

“When naught occurred save a growing hunger in the pit of my stomach and a powerful sense of boredom, I moved out and started taking the odd jobs generally reserved for the greenest of recruits.” ahahahaahah

It taking me a bit to get back into my Warlock. But my God, my Druid was just like I had played her yesterday. And yet, it’s been years.

Hooray for your Paladin!

I absolutely loved this journal entry. I really hope, should you remain trapped in the past, that you continue to document your trials and successes :)

Oh, don’t worry, this started with a plan and it’s going to be followed through.